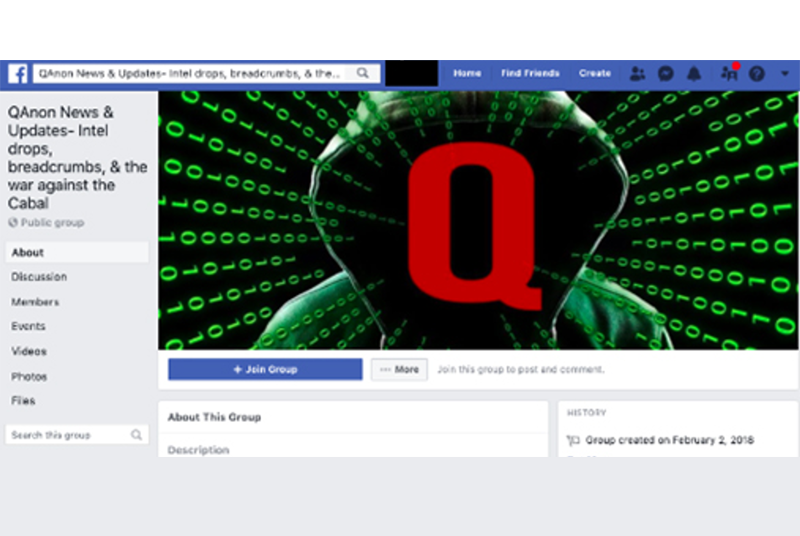 Facebook Groups play a key role on the Facebook platform. Groups are essentially discussion forums organized around an endless number of possible subjects, allowing individuals to pursue their interests and communicate around shared interests. Groups can be public (posts are visible to all Facebook users) or private (individuals must be approved by the group administrator to join and see the posts).

Despite public announcements of efforts to curb hateful speech and misinformation across its platform, Facebook still hosts many spaces in which this content propagates and thrives. While some of these problematic activities occur in small groups, a number of problematic Facebook groups have grown to a significant membership size, yet are still allowed to exist by Facebook.

This is not by accident. Groups are largely self-moderated spaces overseen by specific users with administrative or moderator rights. Facebook states that groups can be banned for repeatedly reposting items that have been flagged as false news, but the system can be circumvented. While posts that break Facebook’s guidelines can be flagged to the platform by members in the group, some moderators actively warn their members not to report problematic content to Facebook. For example, the rules for the group “#RedneckIII%”, a nearly 2,000-member group associated with the militia movement (discussed more below), say “NO REPORTING If you dont like a post keep scrolling. Simple as that. Reporting to facebook is an automatic boot. You can contact an admin and we will check out your claim.”[sic] In many other instances, racist, homophobic, and other hateful posts are not deemed offensive enough by Facebook’s standards to warrant intervention. Facebook has a history of overlooking this kind of behavior, arguing that some hateful content does not go against their Community Standards.

Below is a diverse set of examples of large groups focused on hate, conspiracy theories, or misinformation that are condoned by Facebook.

QAnon is a conspiracy theory rooted in the claim that world governments are controlled by an underground political group of pedophiles. Followers of the theory, some of whom are extremists or discuss violence, believe the President will bring members of this cabal to justice. Additionally, this dangerous theory is known to have antisemitic and anti-government undertones; it encourages a distrust in democratic government, and belief in several antisemitic tropes, such as the blood libel theory and hatred towards George Soros.

QAnon has always maintained a strong online following, and Facebook is no exception.  The group “QAnon News & Updates – Intel drops, breadcrumbs, & the war against the Cabal” has 191,145 members, and features posts highlighting pedophilia and the infamous and long debunked Pizzagate theory. One post shares a link titled “EMERGENCY UPDATE: HRC RAPE TAPE DROPPED!” Another post vilifies Bernie Sanders with the claim that he “has Pizzagate supporters on his rally stages” and that “Pizzagate is real.” A third post amplifies the antisemitic trope painting American Jews as equally or more loyal to Israel than to America. The post links to an article with the headline, “Jewish Senator Introduces Law To Imprison Americans For Criticizing Israel.”

In recent months, the pandemic has provided ample fodder for QAnon groups, most of it centered around various conspiracy theories. Common theories are that the pandemic is a hoax or that it is a biological weapon deployed by various enemies of America. Other recent events, like the murder of George Floyd and the ensuing BLM protests have led to widespread speculation that the Black Lives Matter movement is paid for by outside actors like Soros, China or the Democrats. 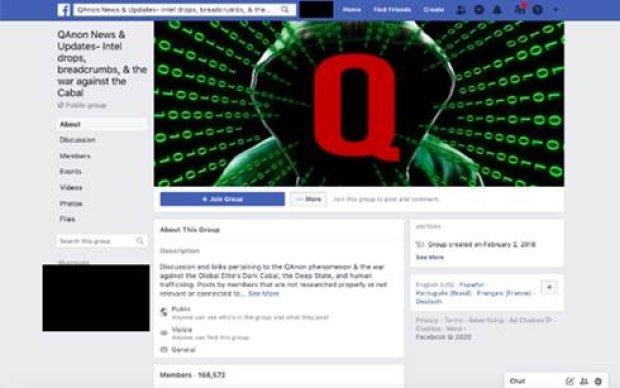 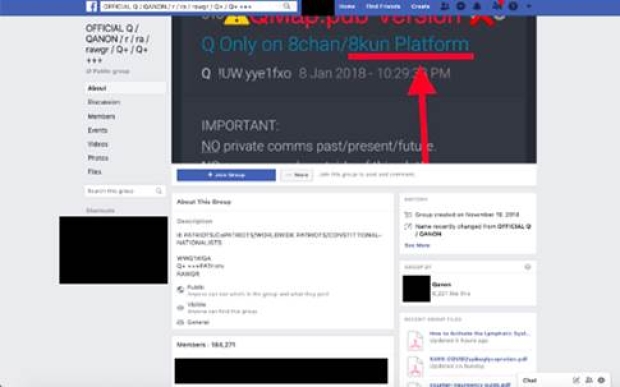 For example, the 29,000-member group “Official Q / QAnon Public Group” regularly features problematic posts, such as this post making a “joke” about cars running into protesters, which has happened.

Similarly, the group Q-Anon Patriots, which has over 38,000 members, includes posts spreading theories of cannibalism, such as this post that alleges a connection between a sculpture owned by the lobbyist Tony Podesta and the pose in which serial killer Jeffrey Dahmer put one of his victims. 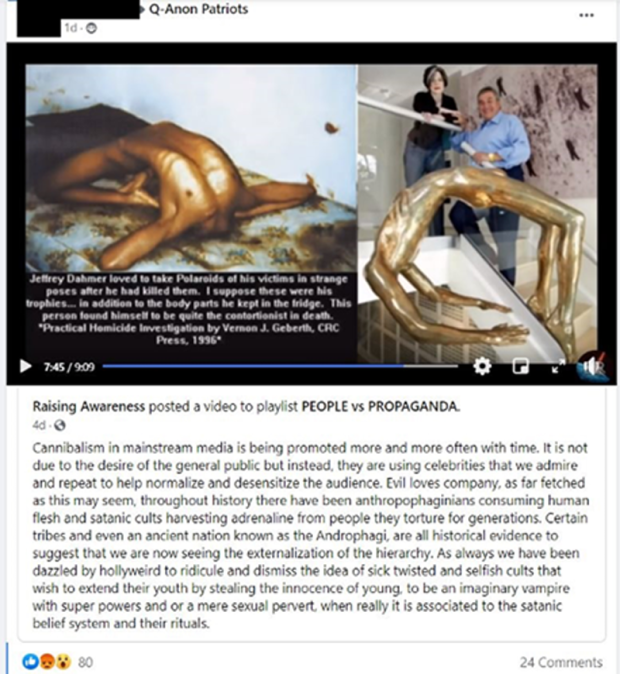 Three Percenters are a wing of the militia movement that arose in 2008-2009, with the term coming from the myth that only three percent of colonists fought against the British during the Revolutionary War, but still achieved liberty for all. Three Percenters believe they are the modern-day three percent of colonists, in this case fighting against the supposedly tyrannical American government. The militia movement is an anti-government extremist movement, not a white supremacist movement, but many of its adherents have strong anti-immigrant, anti-Muslim, or other problematic views. The militia movement also has a long track record of violence and criminal activity, including acts of terrorism.

From the beginning, Three Percenters have used Facebook groups and pages to spread the ideas of the militia movement. Numerous large Three Percenter umbrella groups have formed on Facebook.  While some Three Percenter Facebook groups have fallen apart, a number remain. Three Percenters have a number of large public and private groups, as well as smaller groups focused on particular states. For example, the public group “Three Percenters (III%ers) for Constitutional Troops and Law Enforcement” has over 12,000 members. One post links to an article titled “Black NFAC Militia Leader Demands 'Black Nation' Inside America: 'We’ll Take Texas’” with the caption, “If the government just steps back, regular Texans will take care of this real quick.” Similarly, the page “The Three Percenters – Original,” with 225,144 followers, includes posts such as a link to a video of Black Lives Matter protesters surrounding and shooting at a vehicle, with the caption, “Should have put the pedal to the floorboard and never slowed down. Shoot into my vehicle and it's game on.” And the page “3 Percenters” features posts including Islamophobic images. 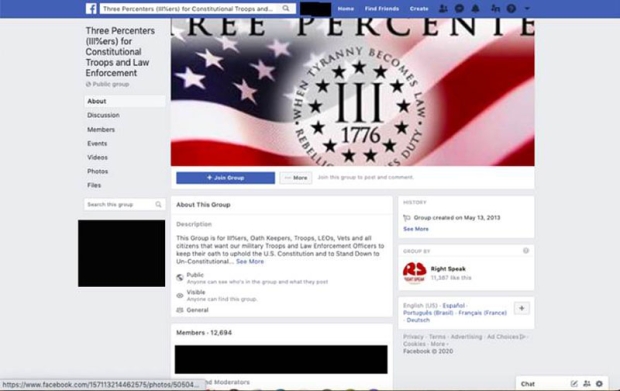 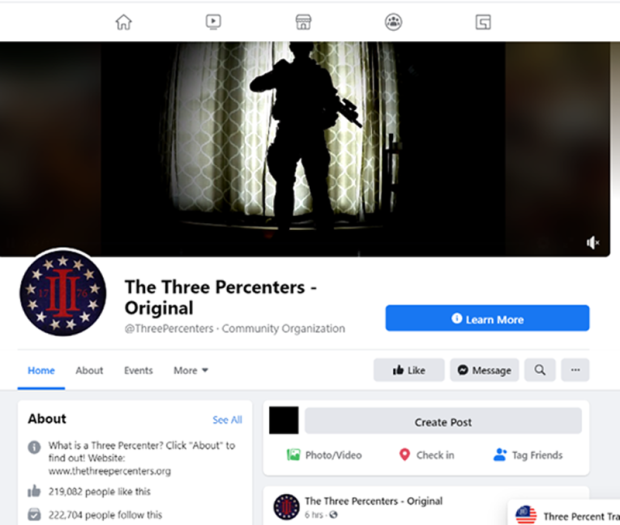 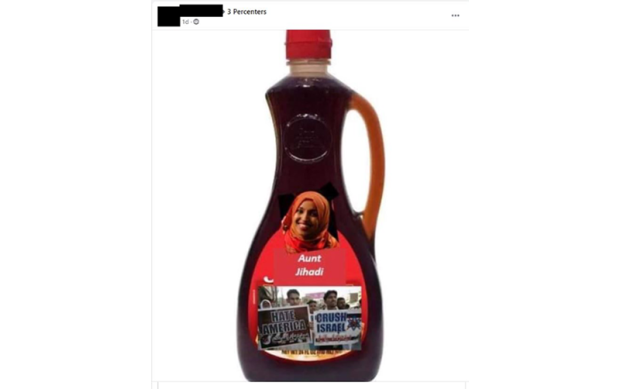 Facebook also condones large groups focused on antisemitic conspiracies. Individuals continually spread antisemitic conspiracies that Jews have complete control over the Federal Reserve and large banks.  Rothschild, the name of a famous Jewish family involved in banking, is one of the most prominent names associated with these attacks. For example, there is a private group called “Exposing the Rothschilds” of over 130,000 members that posts content such as conspiracy theories, antisemitism and broadly hateful content. 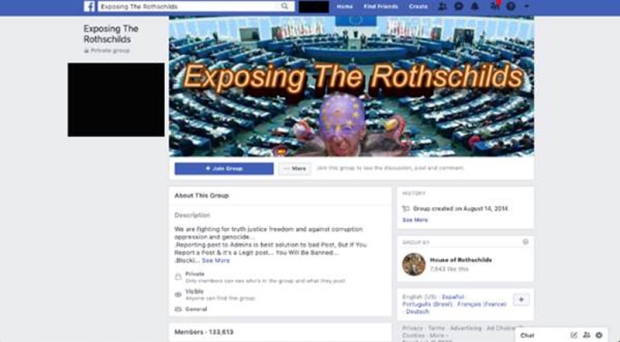 Similarly, Facebook allows groups focused on George Soros conspiracy theories. For example, there is a group titled “George Soros: The Enemy Within” with over 3,500 members and posted content that is racist, antisemitic, misinformative, and attacks George Soros. The group states that it is “dedicated to spreading the truth about public enemy number 1 George Soros... and get the public informed of the machine behind all the cop killings, riots and civil unrest our nation is currently experiencing.” This group encourages “patriotic disobedience” of not adhering to COVID safety guidelines, promotes videos stating that the Black Lives Matter movement has a larger goal of turning the US into a communist state, but mostly shares articles and videos claiming that George Soros is orchestrating the protests and civil unrest in our country, or is connected to the coronavirus in some way. 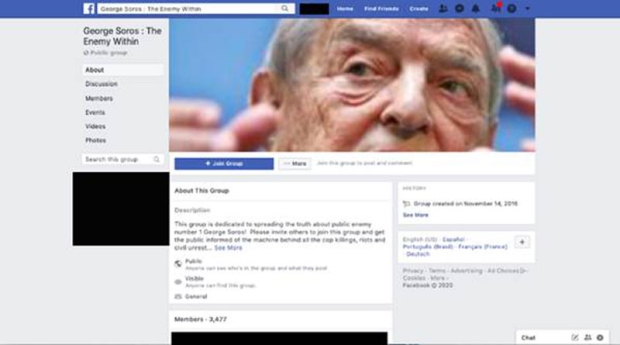 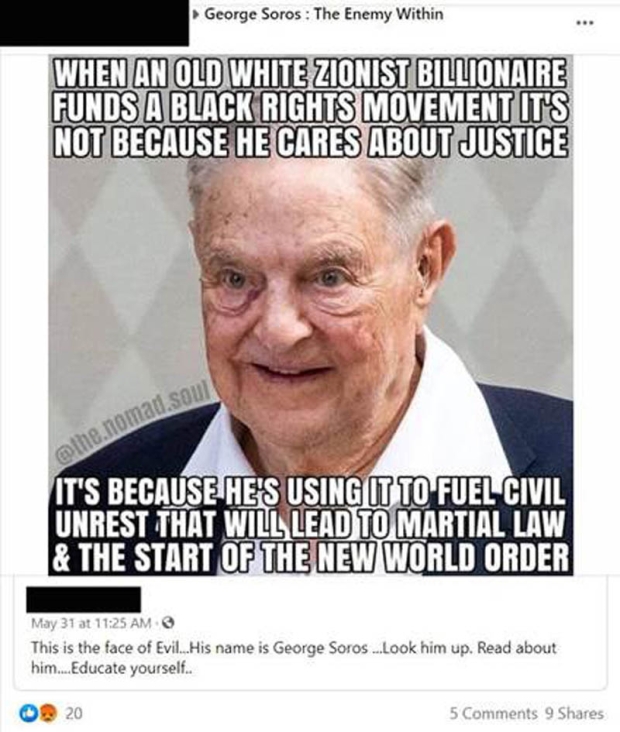 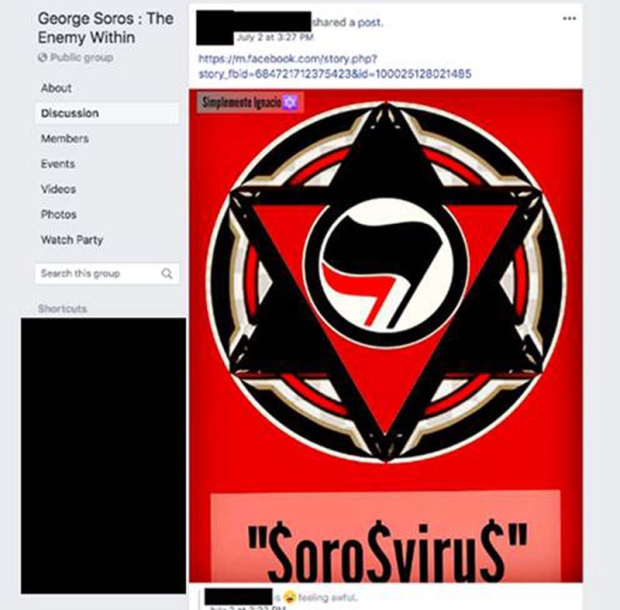 There are plenty of Facebook groups of varying sizes that fall under the white supremacist banner. In some of these groups, the extremist rhetoric posted by members is blatant, whereas in others it is much more subtle or muted. One particular “White lives matter” group illustrates the blatant white supremacy. (It should be noted that there are more than 20 Facebook groups using the name “white lives matter,” only some of which are full of racist or white supremacist content.) “White Lives Matter” is a white supremacist phrase that originated in early 2015 as a racist response to the Black Lives Matter movement in America.

The “About This Group” section of the “White lives matter” group, which was created only at the beginning of June 2020 already has more than 1300 members, states “That white lives matter too!!! We need to preserve our way of life, preserve our Race!!! Be proud, Stand firm and as always protect yourself at all cost.” The discussions in this group are rife with vulgar, racist comments as well as highly offensive memes. For example, on July 19, a group member commented about the beautiful weather he was experiencing and that all seemed “better in the universe,” only to say “then I saw that John Lewis had died and it all made sense.”

Another member posted a racist meme that said “The new flag for Black Lives Matter” along with an American flag designed to look like a watermelon. 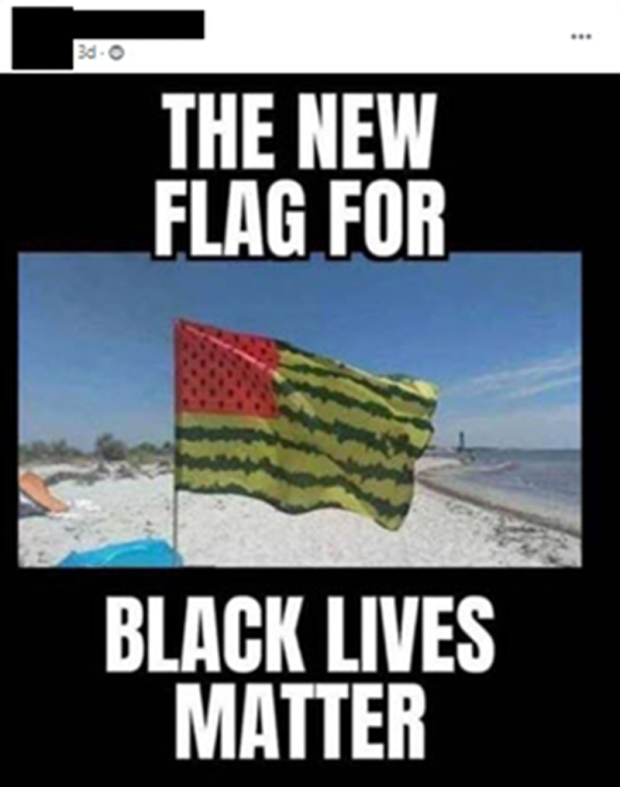 One white supremacist member signed off on a recent post with “LOVE YOUR RACE. #14words88precepts” where the “14 Words” references one of the most commonly used numeric codes by white supremacists, and the “88 precepts” are the guidelines for securing the goals of the 14 Words. 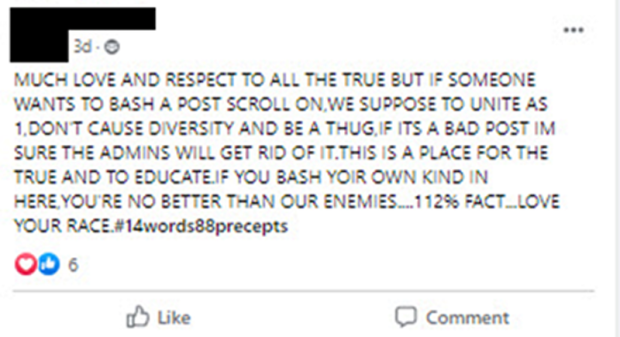 There are also a variety of groups dedicated to celebrating the Confederacy and its controversial battle flag. Although some groups focus on topics like personal histories, others are filled with racist content. For example, the group “Confederate Citizens,” which has over 96,000 members, describes itself as a page where “like-minded individuals can discuss, reminisce, and collaborate on southern culture, Christian values [and] the Confederacy.” In between posts “honoring” the Confederacy are warnings of leftist attempts to start a race war and praise of violence against protesters. For example, a recent post by a group moderator called for all white supporters of the Black Lives Matter and Antifa movements to be “rounded up and summarily executed.” Others claim that if Antifa wants the police to be eliminated then there is “no one to stop us from coming after them.” 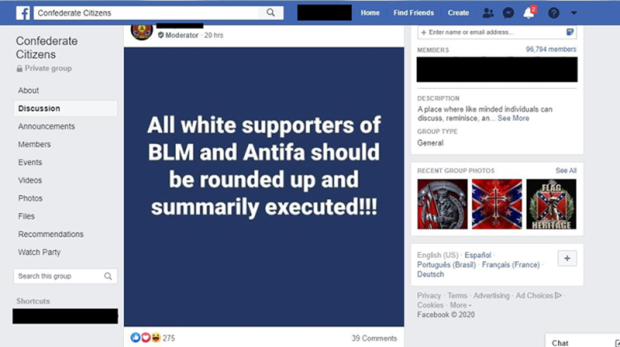 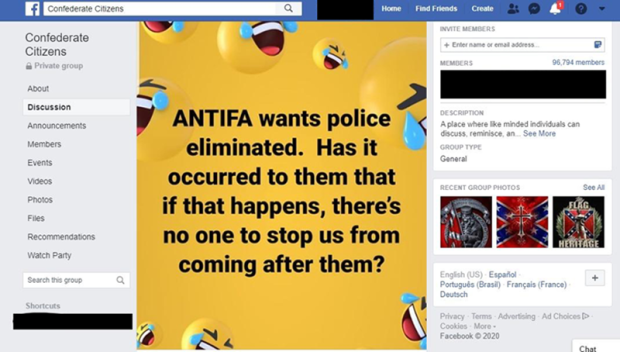 The above provides only a small sampling of the hateful, conspiratorial or problematic groups on Facebook. Until Facebook strengthens its lax policies and changes its approach to moderation in groups, we can expect these groups to continue to be bastions of problematic content.

In addition, Facebook not only condones these groups but also regularly recommends similar groups for users to join. While this feature allows users to find additional groups focused on benign topics, it also can drive individuals towards hateful and conspiratorial content. In fact, according to its own internal research in 2016 on German political groups on the platform, Facebook found that 64 percent of all individuals in extremist groups joined based on a suggestion from Facebook. When presented with this internal research, Facebook reportedly quashed internal discussion. Unfortunately, Facebook has continued to recommend users join hateful, divisive, and conspiratorial groups such as those listed above. For example, a subset of the recommendations in these screenshots are to QAnon groups, antisemitic groups, and other hateful groups. 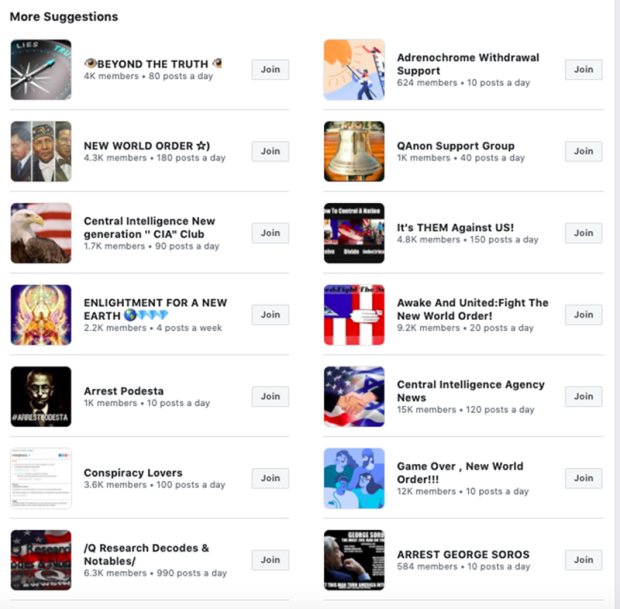