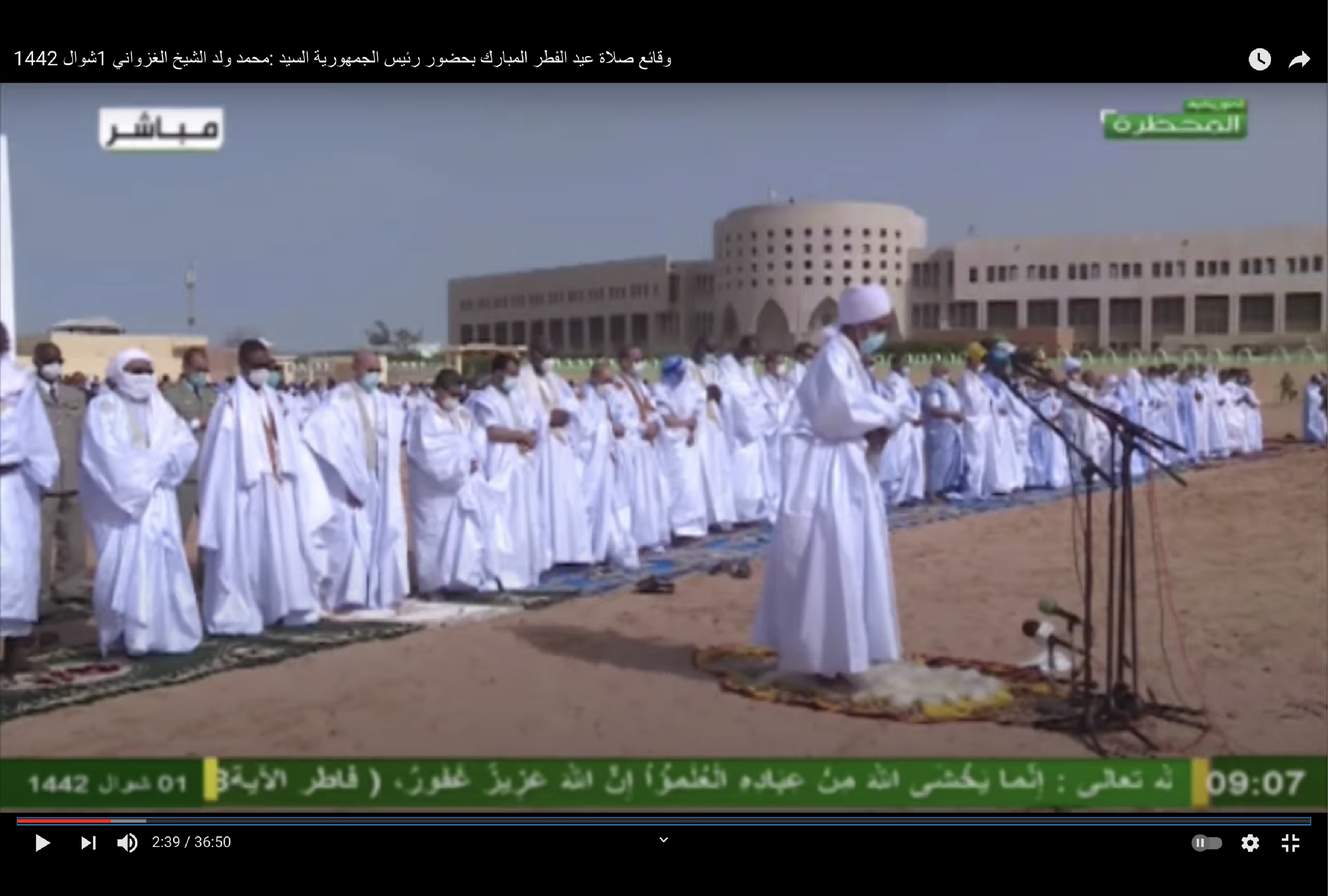 In the last year, peace accords between Israel and four Arab states fueled predictions that several other Mideast governments might soon make amends with the Jewish state.  Saudi Arabia, Mauritania, Oman, Kuwait, and Qatar were all identified as possible next candidates for peace with Israel.  Reports also suggested that Turkey and Egypt, which recognize Israel but avoid fully normalized relations, might face new pressures to shift from cold peace to warmer ties.

However, last month’s deadly conflict between Israel and the Palestinians offered a chilling counterpoint.  One overlooked but alarming trend in this regard has been a profusion of harshly anti-Israel and often antisemitic state-sponsored sermons in these seven countries by top religious officials.

It is not surprising that religious leaders in these countries responded harshly to the crisis,  reacting to violent confrontations at the al-Aqsa Mosque as well as to more than 200 Palestinians being killed in Gaza (roughly half of whom were civilians, according to the United Nations).  However, there is no justification for these U.S.-allied governments choosing to amplify religious messages that encourage enmity, hatred, killings, or severe anti-Jewish stereotypes.

The Kingdom of Saudi Arabia

As ADL recently documented, some of the most striking sermons of this sort were given by official Saudi clerics in Mecca and Medina, at the two holiest sites in Islam.  In sermons that were broadcast on state television and approved in advance as a matter of government policy, these government appointees gave sermons calling on God to guide the shooting by Muslim combatants against Israel, described Israeli Jews as the enemies of God, prayed for divine intervention to “cleanse the al-Aqsa Mosque from the befoulment of the Jews,” and wished for divine protection “from their evils and all the rest of the enemies of religion.”

The Islamic Republic of Mauritania

On May 13th, Mauritania’s president attended Eid al-Fitr prayers in the capital city of Nouakchott, in a service led by the imam of the city’s Grand Mosque.  Imam Ahmad Ould al-Murabit, who is often referred to informally as the country’s grand mufti, called for the mass slaughter of Israeli Zionists during this sermon, which was televised by the state broadcaster.

The Sultanate of Oman

The Sultanate of Oman’s government-appointed Grand Mufti Ahmad al-Khalili issued a message on May 10th describing the confrontations at the al-Aqsa Mosque between Israeli police and Palestinian rioters as an “attempt to desecrate” the mosque “by the enemies of God, the corrupters.”  He labeled it a “blatant plot against Islam” by the “dirty” and “defiling” occupation.

In the days that followed, Khalili repeatedly referred to Israel as “the enemy” and called on all Muslims to “liberate the al-Aqsa Mosque and cleanse it from the befoulment of the occupation.” While it is conceivable that Mufti al-Khalili’s remarks were directed solely at Israel’s armed forces and not at Jewish people as a whole, his language certainly propagated some longstanding anti-Jewish tropes, such as being “corrupters” who hate Islam and befoul Muslim holy sites.

The State of Kuwait

Every week, the Kuwaiti government publishes a full text it requires all of the country’s 1,500 Sunni mosques to use as the basis for Friday sermons.  This year, the official sermon that Kuwait’s Ministry of Endowments and Islamic Affairs published for use on May 14th declared: “Oh God, it is incumbent upon you to deal with the usurper Jews, and to take revenge upon the criminal Zionists, and to return al-Aqsa the wounded to the possession of the Muslims.”

The next week, Kuwait’s official Friday sermon went further, calling for al-Aqsa “to be freed from the claws of the attacker Jews, and cleansed from the filth of the usurper Zionists” who hide truths and “assert fabricated claims” to “their alleged temple.”  It declared it “an obligation” for Muslims to stop this “sabotage” and “to end the plots of scheming, deceit, and aggression.”

The State of Qatar

On May 15th, Qatar’s state-controlled Grand Mosque hosted “the largest rally of any kind” in the country, with Hamas leader Ismail Haniyeh as the featured speaker.  This followed a sermon the previous day by the Grand Mosque’s elder imam, Abdullah al-Naama, that the state promoted on social media in which he called on God to “destroy your enemies, the enemies of religion, oh God, from our lands… Oh God, grant victory to our oppressed and persecuted brothers, the mujahideen in Palestine.  Oh God, root their steps, fortify their blood.  Oh God, guide their shooting… grant them victory over your enemy and their enemies.”

While Naama did not technically make clear in these remarks that he was referring to the Jews, his social media activity at the same time did so quite explicitly.  For example, his Twitter account retweeted a hateful post that listed the following twenty “attributes of the Jews”:

The imam’s Twitter account also retweeted posts about killing Jews, in Israel and beyond.  One decried “the danger” of “the Jews” and instructed Muslims to help “those engaged in slaughtering the enemy” in their “jihad.”  Another encouraged Muslims to ponder “the end of the Jews.” A third invoked a prophesy that one day “you will fight the Jews, so the Jew hides behind the trees and rocks, and the trees and rocks say: ‘oh, Muslim, here is a Jew behind me; kill him’.”

The Republic of Turkey

ADL criticized Turkey’s President Recep Erdoğan for saying in a speech on May 17th that “they are only satisfied by sucking blood,” either in reference to Israeli Jews or to Israel’s leaders.  Unfortunately, the Turkish government’s Directorate of Religious Affairs then proceeded to use similar language in the state’s official Friday sermon that it distributed to approximately 90,000 mosques across the country for use on May 21st, describing either Israeli Jews or Israeli leaders as “those who feed from blood and tears,” and instructing Muslims to be their “enemy.”

The Directorate’s president, Ali Erbaş, also conveyed other worrisome messages during the crisis.  These included a statement on May 8th calling Israel a “barbaric” and “cruel power” that tries to “defile” Jerusalem and “a ferocious community” that “disregard[s] humanity;” a speech on May 11th calling Israel a “terrorist state” and referring to “those who drag the world into wars and chaos;” and a May 18th press release about “Baby killer Israel.”

Erbaş also delivered a sermon at Istanbul’s Hagia Sophia monument in which he said Jerusalem “is being pillaged” and that holidays will remain mournful “until Palestine… is completely free.”  He gave this sermon holding a sword, which he has called a traditional “symbol of conquests”.

The Arab Republic of Egypt

Such rhetoric was less surprising coming from Turkey than from Egypt’s official al-Azhar seminary.  Egypt played a positive role facilitating the recent ceasefire, and it heavily subsidizes al-Azhar, which has previously engaged in some projects aimed at interfaith coexistence.

And yet on May 14th, the Grand Imam of al-Azhar decried what he called “the Zionist terrorists’ continued targeting of innocent civilians” in Gaza.  Even more strident was that week’s Friday sermon from the al-Azhar Mosque and broadcast on the government’s Channel One TV station.

In it, senior religious appointee Sheikh Ahmed al-Hashem urged Muslim leaders to “extract noble Jerusalem from the hands of the queers of the Earth” who “defiled” al-Aqsa.  He said “what was taken by force can only be restored by force” and prayed to accomplish the prediction that judgment day will not come “until you fight the Jews, and the Jew hides behind rocks or trees, so that the rocks or trees say, oh servant of God, behind me is a Jew, come and kill him.”

In recent days, al-Azhar even launched a social media campaign about Jerusalem that veers into anti-Jewish tropes and polemics.  It bluntly proclaims “the Buraq Wall is NOT the Wailing Wall,” dismissing the Jews “alleged temple” and teaching that “the lie called ‘the wailing wall’ is a Jewish Zionist claim applied to the Buraq Wall in a wish to swindle.”

Another one of al-Azhar’s sets of graphics for this social media campaign asks “What is Zionism?” and provides several one-word answers: “occupation,” “aggression,” “racial discrimination,” “deception” and “terrorism.”  It then goes on to teach that Zionism’s ultimate goal is “political, military, and cultural control over the peoples of the world.”

ADL has a long record of championing religious freedom, including the right for religious communities to believe and worship as they see fit.  At the same time, top faith leaders should be encouraged to use their platforms of authority responsibly.

There is simply no excuse for government-sponsored senior preachers to be encouraging enmity, hatred, killings, or severe anti-Jewish stereotypes.  And it is unacceptable for governments to be recklessly mass distributing these messages of hate and violence to millions, such as on state TV.