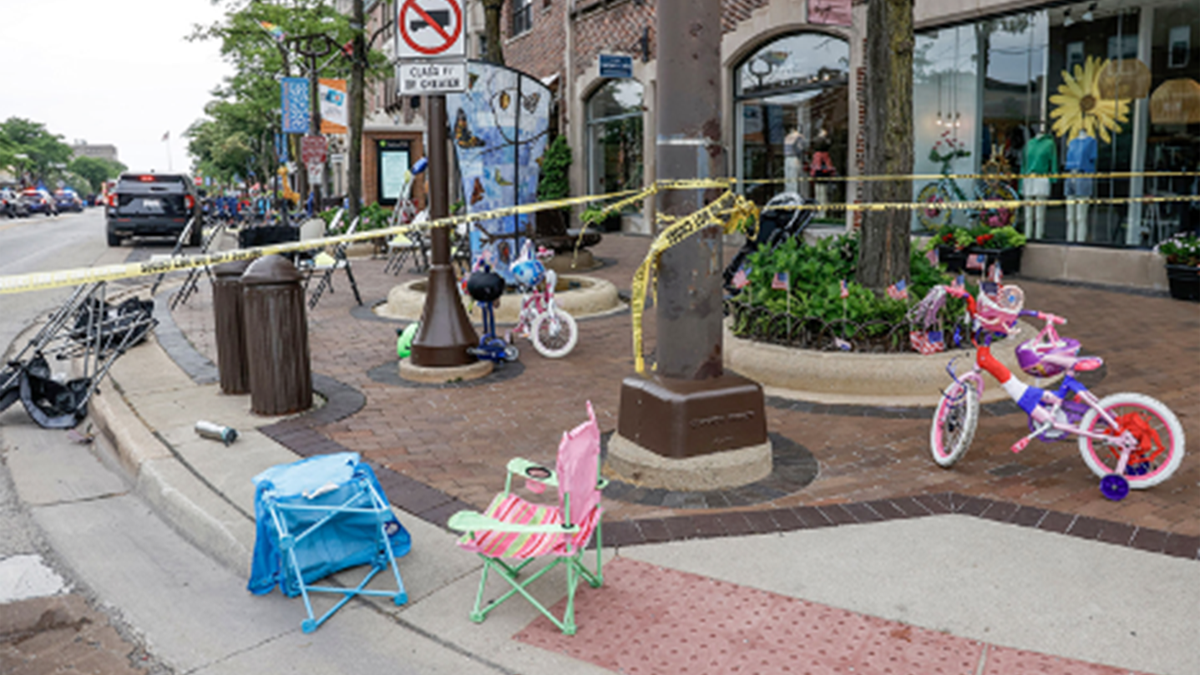 Crimo’s motivation for the shooting remains unknown, and there is no evidence at this time that he adhered to any specific political or hate-driven ideology. Amidst this uncertainty, a myriad of false and misleading information about the shooting has emerged. While entirely predictable, this flood of falsehoods trivializes the suffering of victims and their families and further confuses the public. This piece will highlight and clarify some of the prevailing disinformation, misinformation and conspiracy theories that have circulated since the Highland Park shooting.

FALSE NARRATIVE #1: This was a false flag operation or a product of MK Ultra
False flag conspiracy theories are extremely common in the wake of newsworthy tragedies or acts of violence. In the case of mass shootings, the allegation is typically that the event was orchestrated by the government – sometimes with “crisis actors” playing the victims – in order to implement stricter gun control measures. 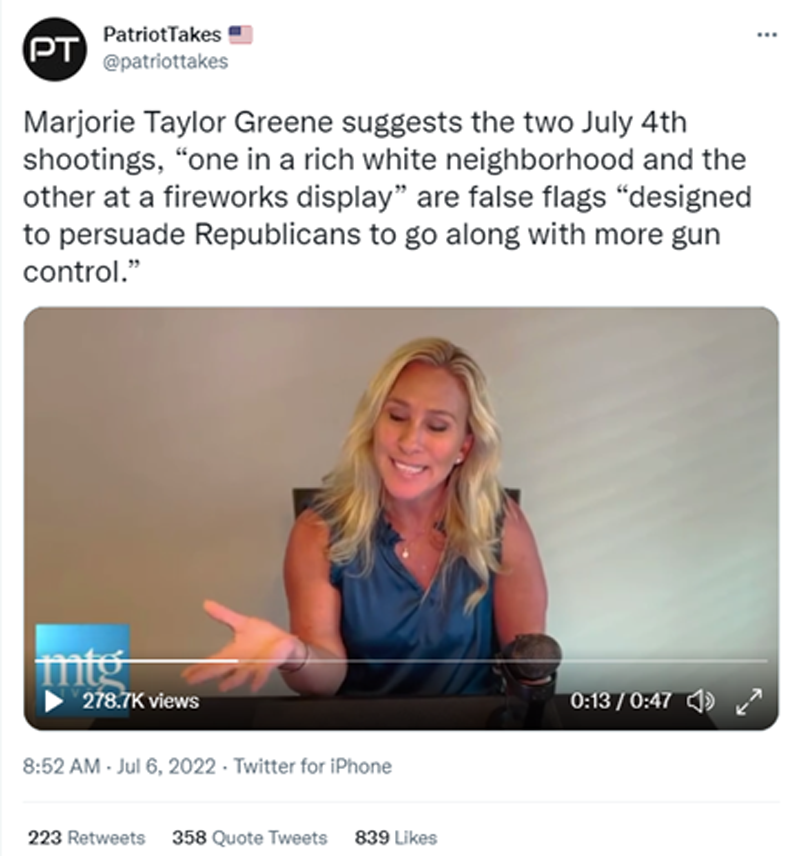 Marjorie Taylor Greene expressing skepticism about the legitimacy of the Highland Park shooting. Source: PatriotTakes on Twitter
One of the most notable past examples of this strategy is Alex Jones’ accusations that the 2012 Sandy Hook shooting was a hoax. Similar conspiracy theories have followed a number of subsequent tragedies including the Parkland shooting in 2018 – which prompted U.S. Rep. Marjorie Taylor Greene (GA), who has a history of spreading conspiracy theories like QAnon, to harass Parkland survivors and accuse them of getting money from George Soros.

False flag/gun control theories regarding the Highland Park shooter on an Incel forum.

An adjacent theory is that the Crimo was a product of MK-ULTRA, a secret (but real) government program from the 1950s until 1973, in which unethical experiments were conducted on participants to explore mind control, often involving exposure to LSD, psychological torture and more. MK-ULTRA theories also followed the May 2022 school shooting in Uvalde, Texas.

It is likely that this particular theory was further inflamed by a doctored or fake image circulating on social media showing a post from an Instagram account with the shooter’s name, photo and a caption that states: “I am a product of MK Ultra and I am a Liberal.” 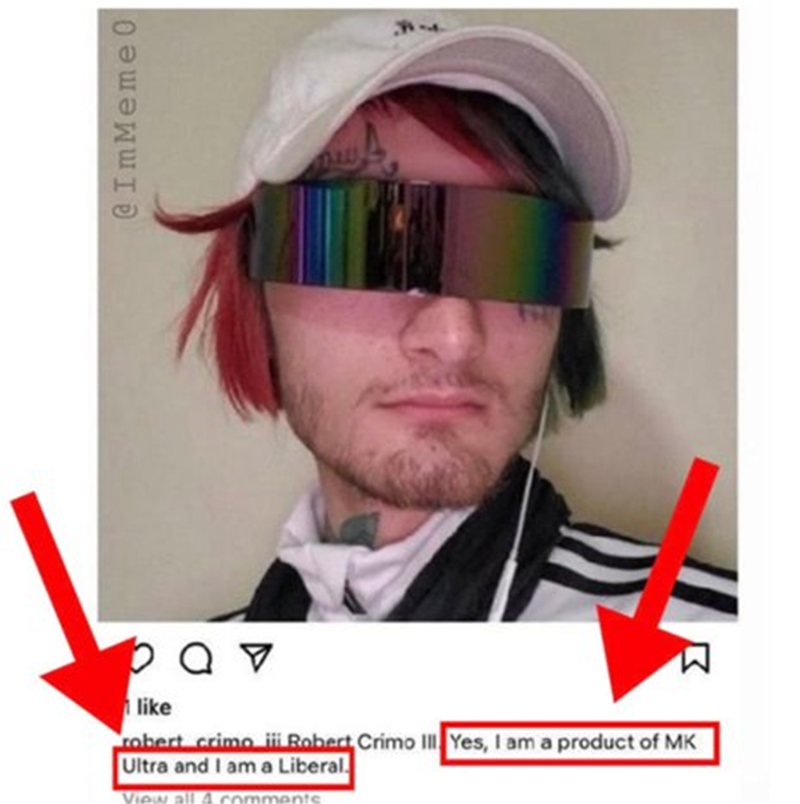 The handle on this Instagram image is not associated with Robert Crimo. It may be from a copycat account made after the official Instagram was pulled offline, or it may be an entirely doctored image. 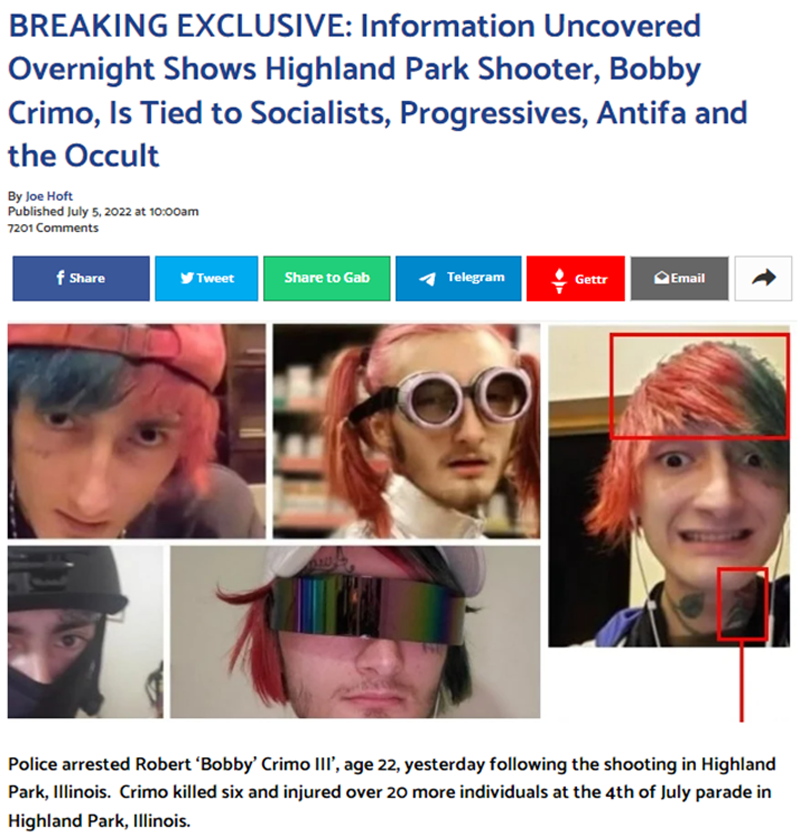 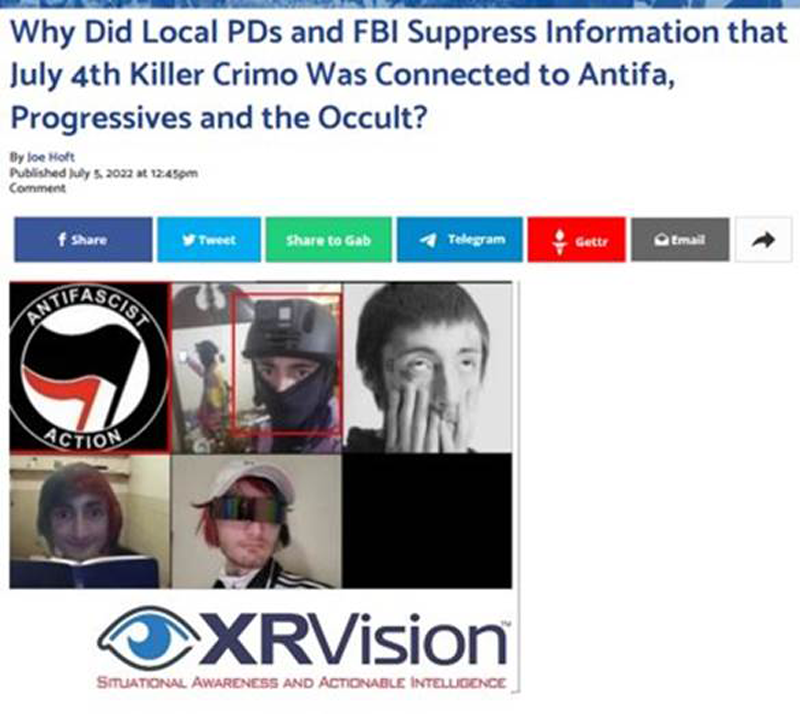 These articles included screenshots of an Instagram feed that they claim belonged to Crimo showing a number of images – including a logo often associated with Antifa. However, as with the prior false narrative, these screenshots either come from fabricated accounts or have been doctored, which may have been done as a joke or as a deliberate disinformation campaign to associate the shooter with left-leaning ideologies. Again, these images have not been taken from the documented Instagram account associated with Crimo.

When the name of a mass shooting suspect is released, it is not unusual for copycat social media accounts to quickly emerge. This happened after the Oxford High School shooting in late 2021, as well as after the recent Uvalde shooting, forcing social media companies like Instagram and TikTok to remove a high volume of fake profiles from their platforms in real time.

Significantly, the images shared by Gateway Pundit appear to have been supplied by an organization called XR Vision, apparently a facial recognition company. XR Vision has been associated with spreading Antifa-related disinformation, including a claim that they identified Antifa members in the crowd at the Capitol on January 6, 2021.

FALSE NARRATIVE #3: The shooter had tattoos associated with “socialism” and neo-Nazi groups
Shortly after Crimo’s name was revealed to the public, photos of him began to circulate online, including images of his tattoos. While Crimo did have several tattoos – including the number “47” and the word “awake” on his face – some images of his alleged tattoos are part of disinformation campaigns attempting to falsely link him to various political ideologies. 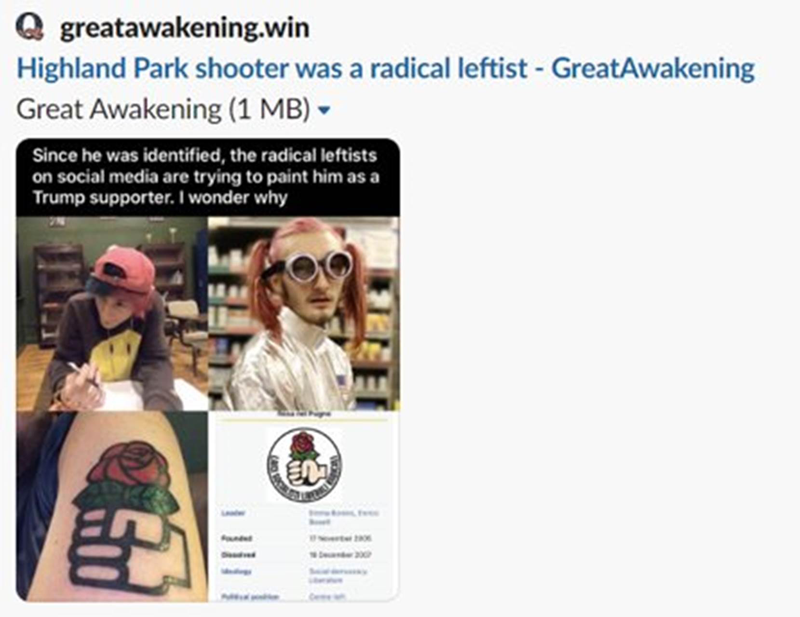 The tattoo’s original image can be found on an eight-year-old Reddit thread, which got so much attention in recent days that the original poster acknowledged that the tattoo belongs to them, not Crimo. The image is one of the top results of a Google search for “socialist tattoo.”
Another picture circulating online suggests that Crimo had a tattoo of the Wolfsangel symbol – typically associated with neo-Nazi groups – on his arm. 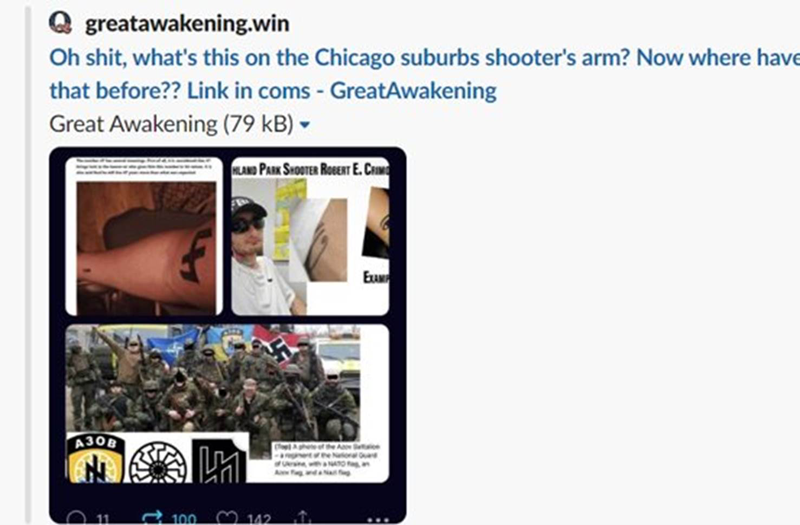 However, this has also since been debunked, as that image was pulled from a 2018 Instagram post from an unrelated individual.

FALSE NARRATIVE #4: An image shows the shooter in rehab or prison
Shortly after the attack, Marjorie Taylor Greene retweeted a picture that the shooter posted in February 2021. The picture, which depicts Crimo in a jail cell, appears to have been digitally altered – likely by Crimo himself. In Greene’s tweet she implied that the picture was genuine and that he was “in jail or rehab or a psychiatric center [sic].” 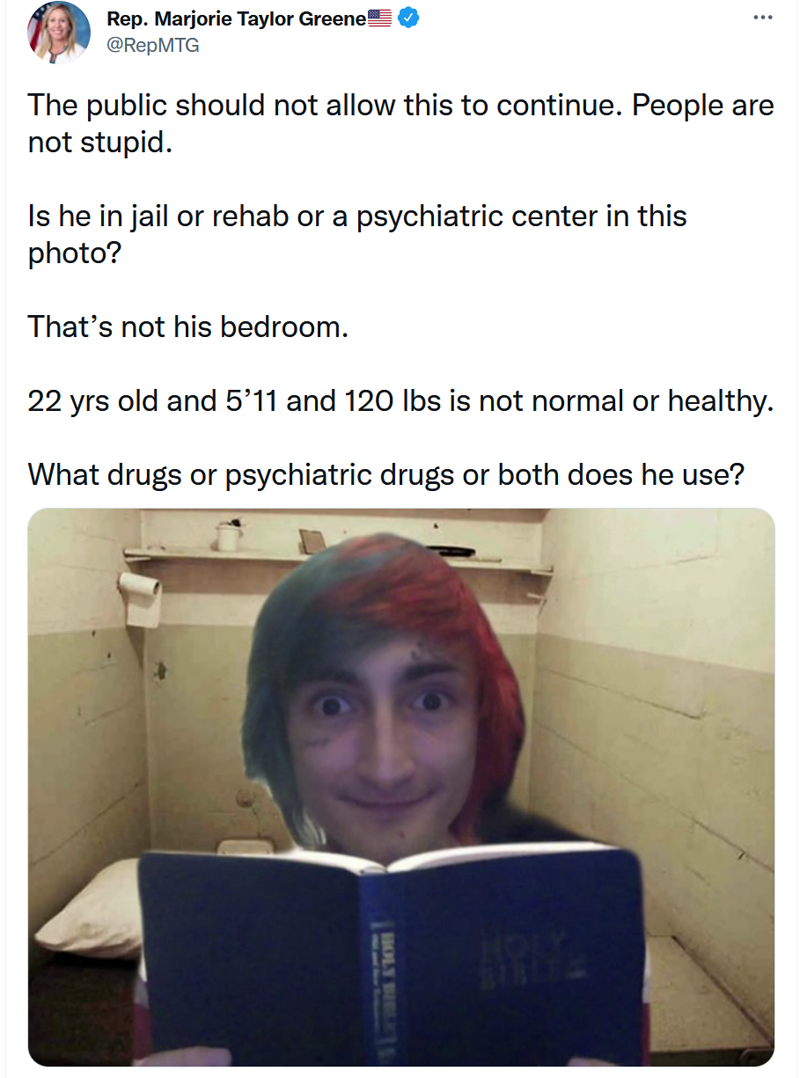 Greene’s commentary mirrors what has followed previous mass shootings, with officials opposed to gun control measures blaming mental illness for the epidemic of violence in America. While law enforcement reports indicate that the shooter did have a history of mental illness, there is no evidence at this time that he was ever in jail or a psychiatric institution.

FALSE NARRATIVE #5: The shooter was transgender
One day after the shooting, law enforcement revealed that Crimo disguised himself in “women’s clothing” on July 4. This update inspired a slew of transphobic discourse on far-right and incel spaces, despite there being no evidence that Crimo actually identifies as transgender.

Transphobic rhetoric on an Incel forum.

This false claim comes at a time of increasingly virulent anti-LGBTQ+ discourse and sometimes violent harassment of trans individuals, drag queens and Pride parade attendees. Accusing a mass shooter with being trans may lead to further demonization and targeting of the LGBTQ+ community.

FALSE NARRATIVE #6: The shooter's logo has explicit ties to the far-right
Several additional unconfirmed theories about Crimo’s beliefs have circulated widely on social media. Some argue his self-made logo is a nod to a symbol used by the Finnish far-right association Suomen Sisu. Speculation also swirled around “SS” – the abbreviated name of the Soundcloud and Discord groups Crimo belonged to (later revealed to stand for “Sleepy Squad”). 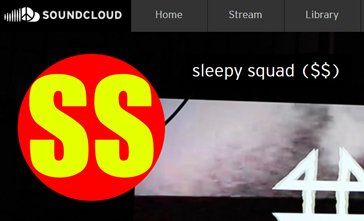 While these theories may not be part of purposeful efforts to spread disinformation, they remain entirely unproven. It is tempting to attempt to uncover a shooter’s motive as quickly as possible, but the hasty spread of unsubstantiated rumors can hinder investigations and negatively impact an already frightened and confused public.

Today, disinformation, misinformation and conspiracy theories seem inevitable in the immediate aftermath of a tragedy. Once a suspect’s name is made public, content moderators should be aware of and prepared to remove disinformation, copycat accounts and doctored images. Information and media literacy should be emphasized in the wake of horrific violence or other catastrophes, with heightened focus on debunking false information and, most importantly, waiting for the facts.