How Extremist Candidates Fared in the Midterms 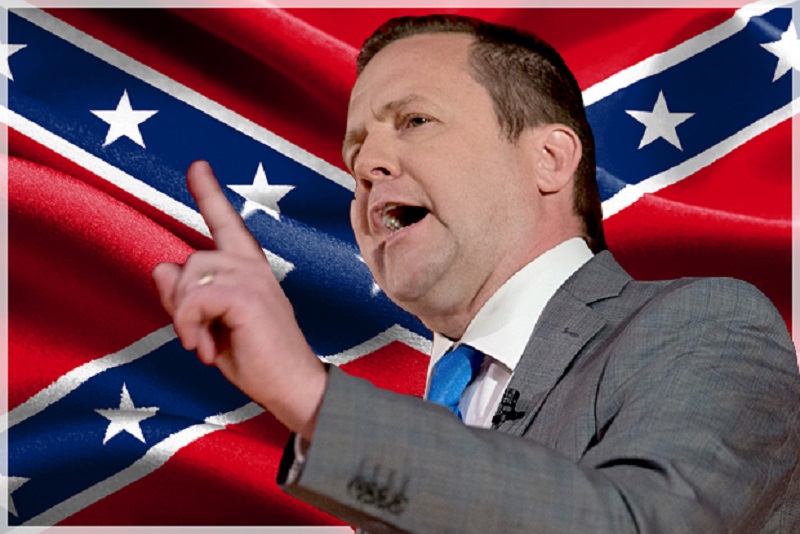 Extremism and Intolerance Are on the Ballot in 2018

The 2018 midterms were not kind to most of the country’s extremist and bigoted candidates, but a number of them did garner disturbingly high vote counts. More than 1.8 million Americans voted for known extremists and bigots who were running for national offices. In races for the U.S. Senate and U.S. House, extremists pulled in, on average, 29% percent of the vote. 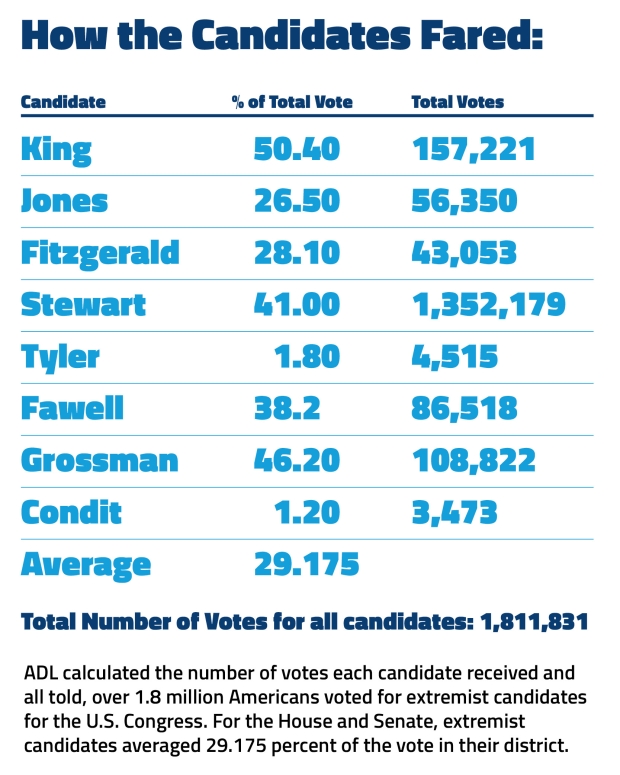 It’s important to acknowledge that some of these votes – perhaps even the majority – may reflect voters’ ignorance and/or their decision to vote a straight party ticket. But it’s also impossible to ignore the fact that a certain number of people felt, in the case of each of these candidates, that it was reasonable to vote for an overt white supremacist, or an outspoken bigot.

The extremists’ sole winner of the night was U.S. Rep. Steve King (R-IA), whose reelection prospects appeared briefly dimmed by his embrace of overtly white nationalist rhetoric. King beat back a strong Democratic challenger to keep his seat in Iowa’s 4th Congressional District. He won his 9th term with 50.4% of the vote.

Despite their losses, the following extremist and bigoted candidates were successful in another, critical sense: For the past several months, they enjoyed a very public platform for disseminating their vile ideologies to millions of potential voters.

Moreover, the political atmosphere that allowed these candidates to compete also allowed others who are not on this list to rely on racist, anti-Semitic and bigoted arguments against their opponents.

After Jones won his primary by running unopposed, Tim Schneider, chairman of the Illinois Republican Party, issued the following statement about Jones’s candidacy: “The Illinois Republican Party and our country have no place for Nazis like Arthur Jones. We strongly oppose his racist views and his candidacy for any public office, including the 3rd Congressional District.”

John Fitzgerald, Republican (U.S. House of Representatives, California-11):  Anti-Semitic conspiracy theorist John Fitzgerald won’t be heading to Washington in January, but he did secure 43,053 votes, or 28.1% of his district

Fitzgerald, a small business owner and perennial, unsuccessful candidate, is a 9/11 conspiracy theorist who publicly “questions” facts about the Holocaust and defends Holocaust deniers. Staunchly anti-Israel, Fitzgerald also makes frequent (false) references to Jewish Americans having “dual citizenship” with Israel, a common anti-Semitic trope. He promulgates some of the most common right-wing conspiracy theories about chem trails, the Federal Reserve, FEMA internment camps for U.S. citizens, vaccines and GMOs, and believes that Planned Parenthood is working in concert with the United Nations to “sexualize” the nation’s public school children.

In July, a robocall, sponsored by white supremacist outlet the Road to Power urged East Bay voters to “End the Jewish takeover of America and restore our democracy by voting John Fitzgerald for U.S. Congress.”

Corley decried interracial marriage during a 2014 appearance on “The Ethno State,” a white supremacist YouTube program hosted by American Freedom Party’s William Johnson, and personally attacked U.S. Senate Majority Leader Mitch McConnell, who is married to Elaine Chao, saying that white people like McConnell have a responsibility to “maintain our people and our culture as much as anyone else.”  During the same interview, Corley complained about school violence against white students and the lack of “champions” for “European or Caucasian Americans.” In September 2018, Corley defended his comments to the Louisville Courier Journal, citing “social science.” The state Republican Party issued the following statement: “[Corley’s] views do not reflect those of the Republican Party of Kentucky.”

Corey Stewart, Republican (U.S. Senate, Virginia):  Stewart, who made no secret of his admiration for white supremacist Paul Nehlen, lost to incumbent Tim Kaine with 41%, or 1,352,179 votes.

The GOP candidate for U.S. Senate referred to Nehlen as one of his “personal heroes" at a political event in February 2017.  In a video obtained by CNN, Stewart praised Nehlen again in November 2017, after Nehlen had made his anti-Semitic, white supremacist positions public. In the exchange, Stewart expresses support for Nehlen’s candidacy and refers to him as a “real conservative.” Stewart, an outspoken supporter of the white supremacist Unite the Right rally in Charlottesville, has appeared publicly several times with its local organizer, Jason Kessler.

Rick Tyler, Independent (Governor of Tennessee and U.S. House of Representatives, Tennessee-3): While white supremacist Rick Tyler claimed to be running simultaneously for Congress and governor, his midterm results only reflected his unsuccessful House run. He lost with 1.8%, or 4,514 votes. Tyler helped plan the June 2018 Nationalist Solutions conference, which attracted high profile white supremacists including David Duke, Kevin MacDonald and many others.

Seth Grossman, Republican (U.S. House of Representatives, New Jersey-2): Grossman came within striking distance of winning, garnering 46.2%, or 108,822 votes. Grossman has praised racist opinion pieces that appeared on white supremacist websites, including American Renaissance and VDare. According to CNN, Grossman has said “diversity leads to Muslims killing Christians,” and “Kwanzaa is a fake holiday made by black racists to divide America.” He has also written (on Facebook) that faithful Muslims cannot be good Americans; Islam is a cancer; and gay men with HIV should have been quarantined in the 1980s. While the National Republican Congressional Committee has condemned Grossman and asked him to abandon his candidacy, a local GOP Chairman refused to do so. “You can say many things about Seth Grossman, but the man doesn’t have a racist bone in his body,” Atlantic County Republican Chairman Keith Davis said in a statement.

Russell Walker, Republican (North Carolina State House of Representatives, District 48): Walker, a white supremacist, ended the night with 37%, or 8,588 votes. Walker’s campaign website featured the candidate opining on the “superiority” of white people and declaring there is “no such thing as equality.” Walker has used a racial slur in reference to Martin Luther King, Jr., and stated that Jews are descendants of Satan. State and local GOP officials have repeatedly denounced Walker’s candidacy.

Bill Fawell, Republican (U.S. House of Representatives, Illinois-17): Conspiracy theorist and anti-Semite Fawell lost with 38.2%, or 86,218 votes. Fawell claimed the 9/11 attacks were an “obvious false flag attack whose work was farmed out to Israel’s Mossad by elements high up in our government,” according to reporting by CNN and Media Matters. He has also promoted a range of conspiracy theories about “Pizzagate” and around the mass shootings in Newtown, CT, San Bernardino, CA, Orlando, FL and Aurora, CO.

Steve West, Republican (Missouri State House of Representatives, District 15): West received 5,398 votes to his opponent’s 9,261. West ran a homophobic, Islamophobic campaign under the slogan “Restore Old American Values,” which prompted two of his three children to publicly denounce his candidacy and call him a “fanatic.” His radio show, hosted by his alter ego, “Jack Justice,” is routinely anti-Semitic and Islamophobic. West has said that “Hitler was right,” and told his radio listeners American Jews “have dual citizenship by virtue of being a Jew,” and shouldn’t be allowed to hold public office, work in the media or the judiciary. West’s campaign website highlights his anti-LGBTQ positions and his profoundly Islamophobic views: “…this ideology is foul and needs to be identified for what it is...It is a scourge on America…”

James “Jim” Condit, Jr., Green (U.S. House of Representatives, Ohio-2): Condit, a virulent anti-Semite, lost his bid for a Congressional seat, coming in third behind the Democratic and Republican candidate.  He received 1.2%, or 3,473 votes. Condit’s anti-Semitism was on full display in his campaign radio ads, which ran repeatedly on two Cincinnati AM radio stations: “These massive Trump crowds are the real polls. Not the fake lying polls put out by the big TV networks all controlled by billionaire Communist Jews.”  Condit, who referred the Unite the Right rally in Charlottesville “a major ‘psyops’ against the people of the United States, and especially against white people,” solicited donations for UTR organizer Jason Kessler on his campaign website. Condit has run (unsuccessfully) for this seat before and spewed similarly anti-Semitic bile via radio ads during his 2016 campaign.

Maria Estrada, Democrat (California State Assembly, 63rd District):  Estrada lost her bid for a seat on the state assembly with 44% of the vote. Estrada is an outspoken anti-Zionist whose attacks on Zionism and Israel have raised concerns about anti-Semitism. Estrada has referred to Israeli policies and Zionism as a form of Jewish supremacism, and called Zionism “religious fanaticism.” She said, “Anyone who believes they are one of ‘God’s chosen people’ automatically feels superior and justified and [sic] all they do.”  Additionally, Estrada has expressed admiration for well-known anti-Semite Louis Farrakhan.