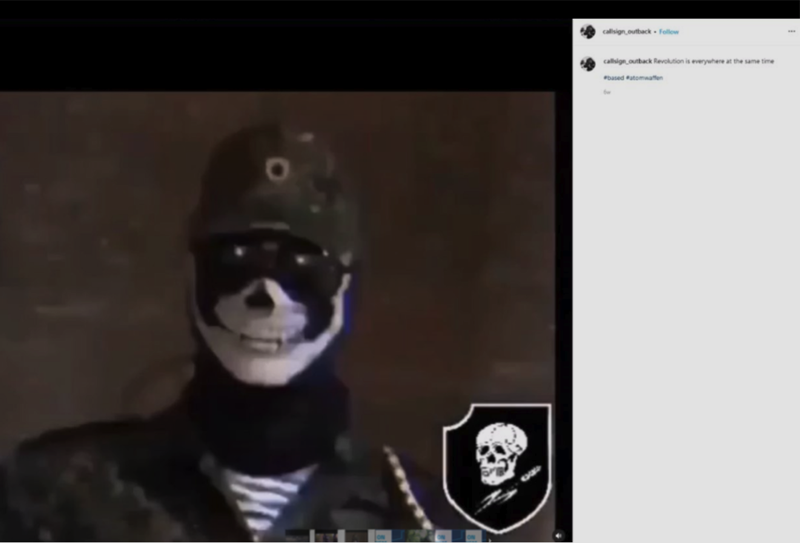 In August 2021, Instagram announced an update to its work against the spread of abuse on the platform, reiterating a zero tolerance policy for hate speech and abusive content, and adding new features aimed at reducing abuse, especially as it occurs via direct messaging (DM) and comments. Despite this update – and a previous iteration in February, 2021 – extremist content remains easily accessible on Instagram.

ADL’s Center on Extremism (COE) researchers found accounts sharing white supremacist content by searching Instagram for terms related to the white supremacist and neo-Nazi movements. Some of these terms were searchable as hashtags, which have the potential to expose users to extremist posts from a multitude of accounts. COE began with a single search for accelerationist content and followed the path to extremist posts that are exposing Instagram users to potentially dangerous and radicalizing content.

Using keyword searches, COE researchers found hundreds of Instagram accounts sharing white supremacist content. Starting with a keyword related to a certain branch of white supremacy brought up extremist accounts that may act as a gateway into the larger extremist community on Instagram and beyond.

COE researchers entered the term “Atomwaffen,” and were able to find and view five Instagram posts containing content linked to Atomwaffen Division, an accelerationist group created in 2016. By searching for accounts that were “following” the original five, the COE was able to quickly locate another 50 accounts sharing white supremacist content, including additional posts related to Atomwaffen and neo-Nazi symbolism such as the swastika or SS bolts. By the third tier of followers, the number of accounts expanded to more than two hundred and branched out to other white supremacist themes, including traditionalism and white nationalism. These accounts were all public, and the incidence of extremist content on private accounts may be much higher.

Accelerationism is one of the most extreme ideologies within white supremacy, and Atomwaffen one of its most notorious groups. Many of the group’s members were arrested in early 2020 and have since been sentenced for threatening journalists and activists. While the group disbanded in 2020, a recent announcement suggested it may be reactivated, which makes the easy accessibility of their content even more concerning.

COE researchers used Instagram’s reporting system to make the company aware of content that violates their community guidelines. The five accounts that were easily discovered were reported to Instagram under content related to “Violence or dangerous organizations.” ADL’s Center for Technology and Society also reported these posts through our trusted flagger partnership 12 hours after the initial report - providing the accounts and material that were in violation of Instagram guidelines. After 24 hours, four of these accounts were removed from Instagram’s platform. The one account that remains on the platform is a publicly accessible account with easily viewable extremist content including propaganda footage from previous Atomwaffen videos.

When looking at the publicly available network of these accounts, it becomes clear that they are not random blips of extremist content but are part of a cohesive community. Many of these pages are connected to one other, following and being followed by each other. Others boast a considerable following, with upwards of 300 followers. An account featuring artwork on neo-Nazi themes has ten thousand followers; it also links to a Twitter account and a merchandise site.

The existence of this online community takes on even greater significance in the context of Atomwaffen’s origin story.

Atomwaffen began on the forums of Iron March, a fascist website that allowed extremists to easily connect with one another.  Iron March was taken down in 2017 but was replaced by Fascist Forge, a new forum that called itself “Home for the 21st Century Fascist.” In early 2019, Fascist Forge was also taken down, and since then, no new forums have emerged to fill this extremist content vacuum. Rather, these groups appear to have taken to using more mainstream platforms like Instagram to connect and reach out to new recruits.

Similar to Iron March and Fascist Forge, in addition to providing an online space for accelerationists to meet and collaborate, were also an invaluable resource for radicalizing newcomers. These sites provided materials and propaganda to teach individuals about accelerationist ideology through its leading proponent James Mason and his collection of essays, Siege. While the accounts that COE encountered did not directly post or supply links to this literature, some did have links to other platforms that could. These links included:

The Instagram accounts found by COE researchers effectively serve as a springboard into accelerationist ideology, providing easy access and pathways to increasingly extremist content. Furthermore, after viewing these accounts and their networks, the COE account was targeted exclusively by “suggestions” to follow white supremacist accounts, not limited to accelerationist content. Suggested accounts focus on European white history and identity, as well as traditionalist propaganda.

These accounts – and the community around them -- illustrate a challenge facing social media platforms: How best to guard against extremists using mainstream platforms as an entry point to engage with the public?