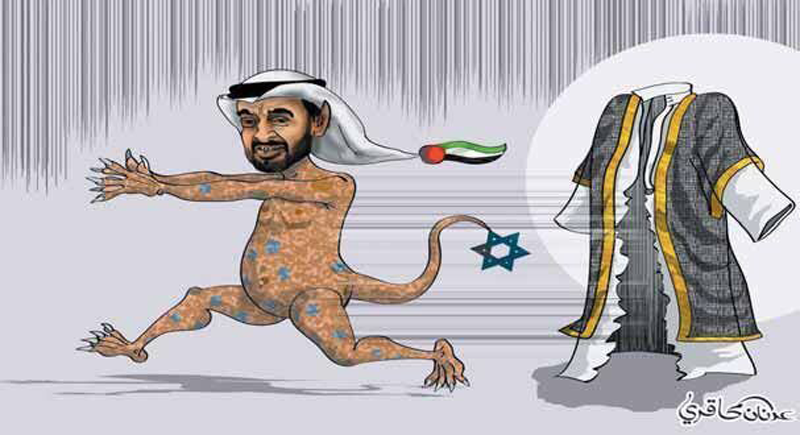 Israel and the United Arab Emirates announced a historic agreement on August 13th to move toward full normalization of relations, the first such accord between the State of Israel and an Arab state since 1994.

However, peace always has its opponents, and this agreement is no exception. Whenever Israel and Arab governments take important steps to engage and reconcile with each other, extremists throughout the region routinely demonize both sides, including in some ways that cross the line into antisemitism or other forms of intolerance.

The following problematic political cartoons, infographics, and front-page headlines are notable examples from Mideast media outlets of content that was circulated in recent days since the historic Abraham Accord. A few of these images had been published previously and were reissued by these outlets in order to attack the accord. However, most of these images are new content.

The vast majority of these materials come from media outlets linked to one of three sources: Iran (or its proxies), the Palestinians, and Qatar.  Although the subset of these examples linked to Iran tends to be the most extreme, certain materials from all three places seem to be fundamentally hostile to Israel or propagate intolerant stereotypes. Perhaps a few of these materials could feasibly be defended as legitimate political commentary, but for the most part they are blatantly unfair, hateful or in some cases, antisemitic.

Many of these critiques vilify Israeli and Emirati officials, with several depicting their peace agreement as a betrayal or a stab in the back against the Palestinians.  Other notable themes include depicting Israel and/or the UAE as demonic, dehumanized, bloodthirsty or blood-soaked, evil, scheming, diseased, or promiscuous.

Part One of Two: Media in Iran 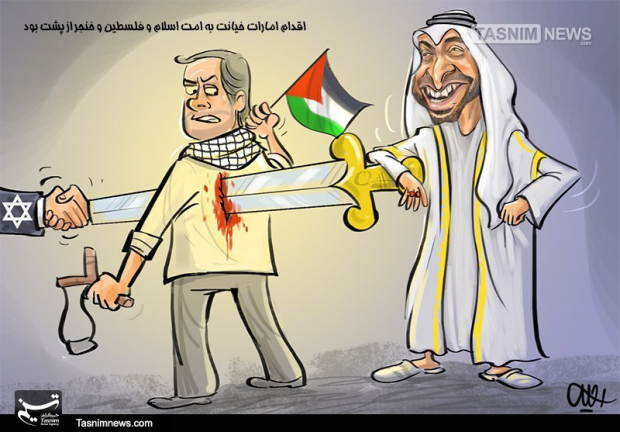 [Cartoon from Iran’s Tasnim News Agency.  Caption says “The Emirates’ action was a betrayal against the ummah of Islam and Palestine and a stab in the back’ (which as the article notes is a quote attacking the Abraham Accord from Hezbollah leader Hassan Nasrallah). August 16, 2020.] 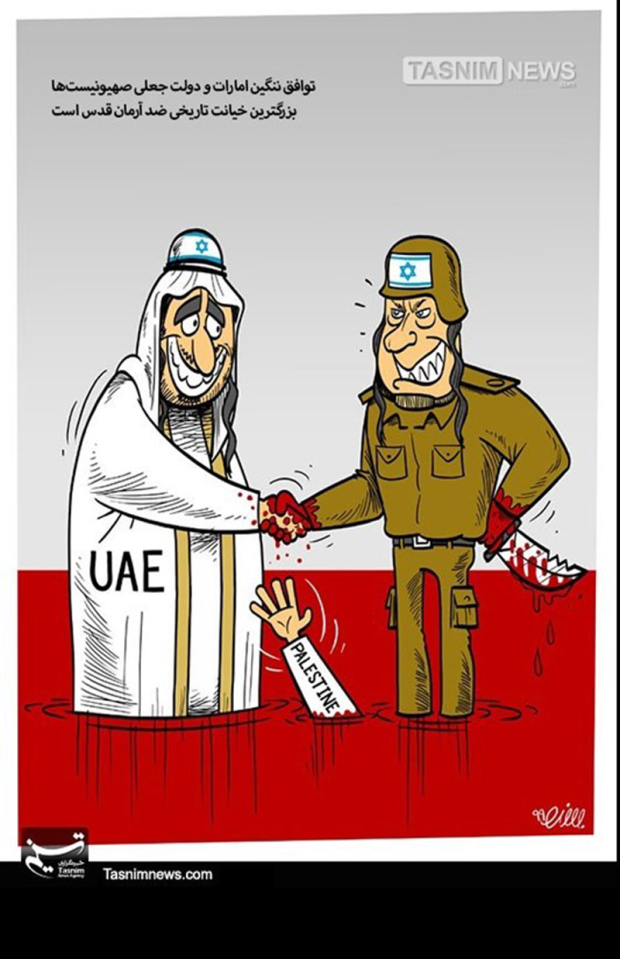 [Cartoon from Iran’s Tasnim News Agency.  Caption says “The disgraceful agreement between the Emirates and the fake state of the Zionists is the greatest historic betrayal against the ideal of Jerusalem”. August 15, 2020.] 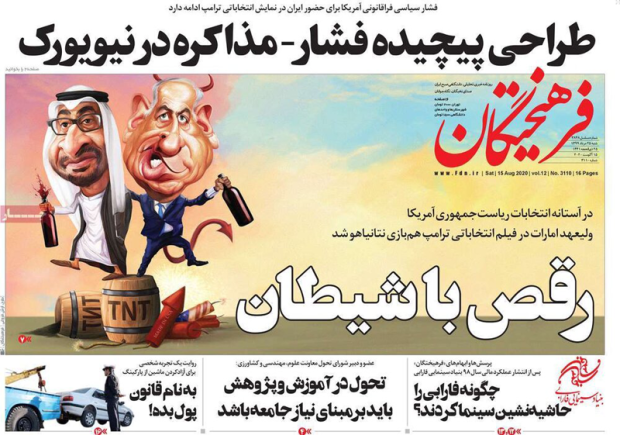 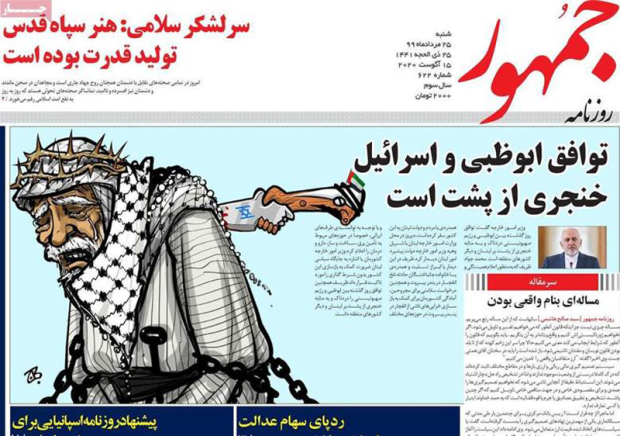 [Front page from Iran’s Jomhor newspaper.  Headline in black says “The agreement by Abu Dhabi and Israel is a stab in the back”. August 15, 2020.] 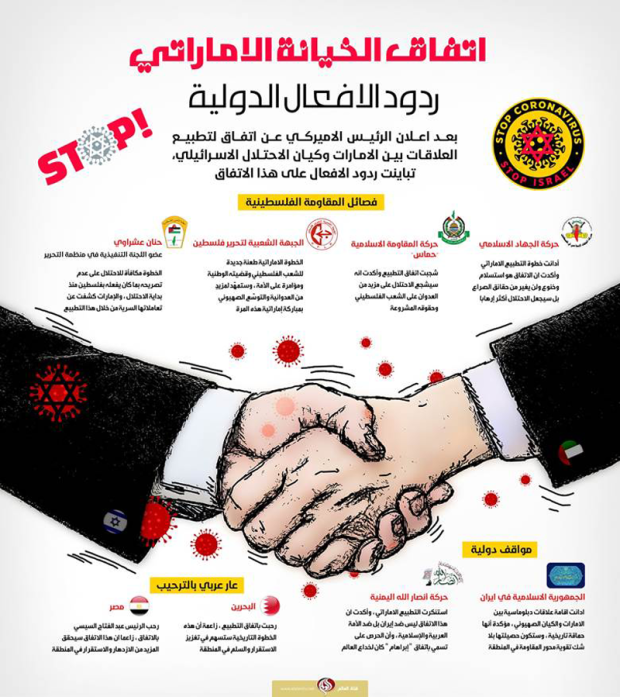 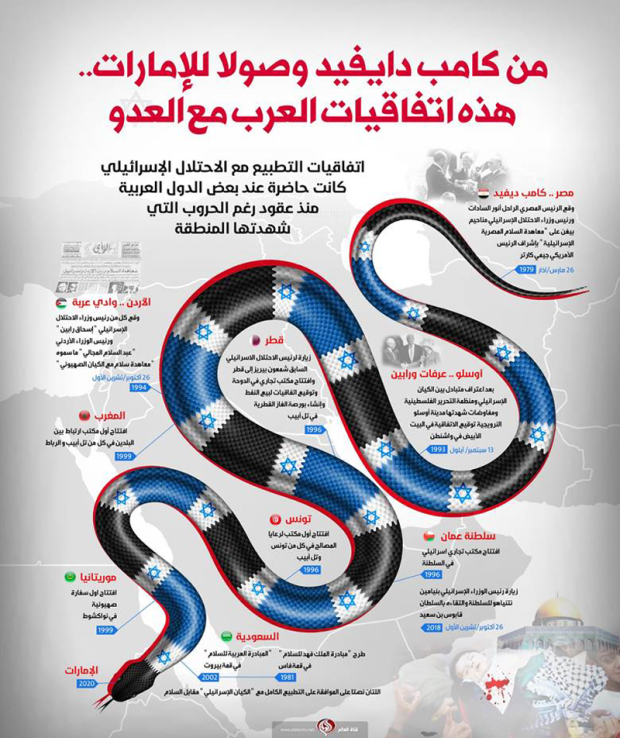 [Infographic from Iran’s Arabic-language al-Alam TV website.  Headline in read says “From Camp David arriving to the Emirates, these are the Arabs’ agreements with the Enemy.” . August 16, 2020] 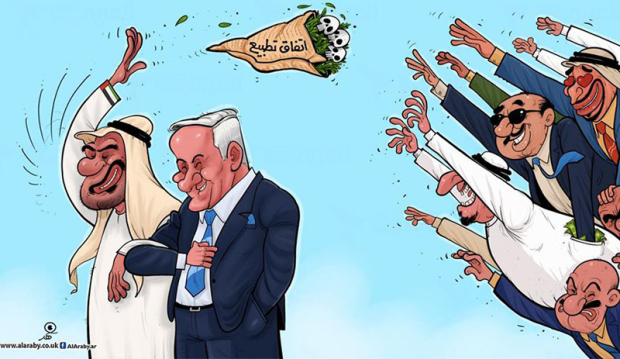 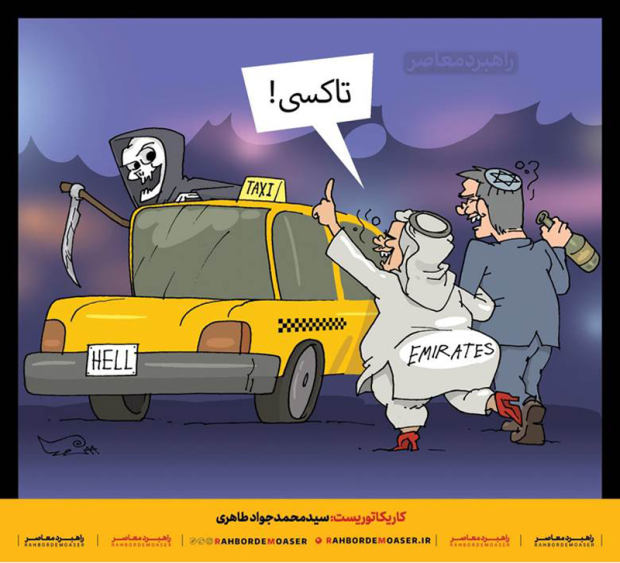 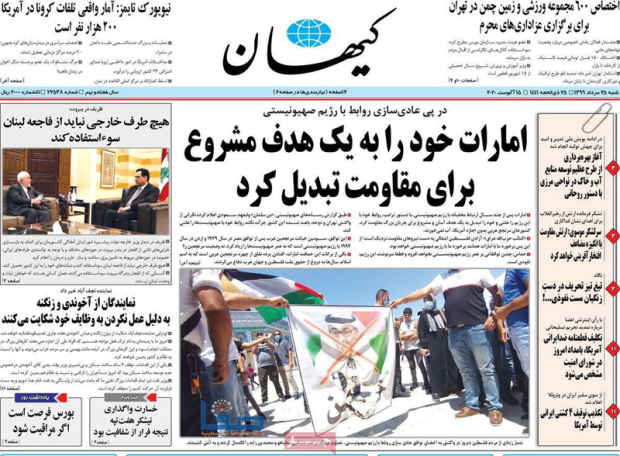 Part Two of Two: Media from the Arab World 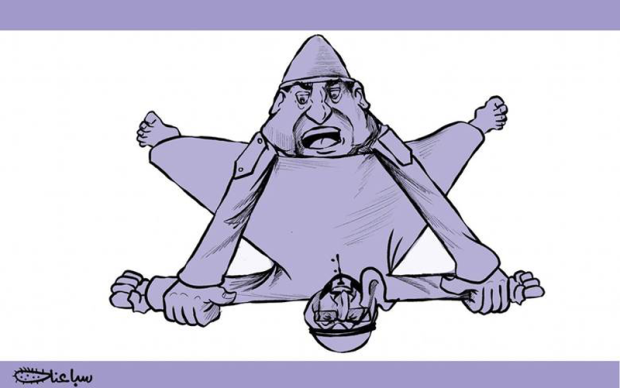 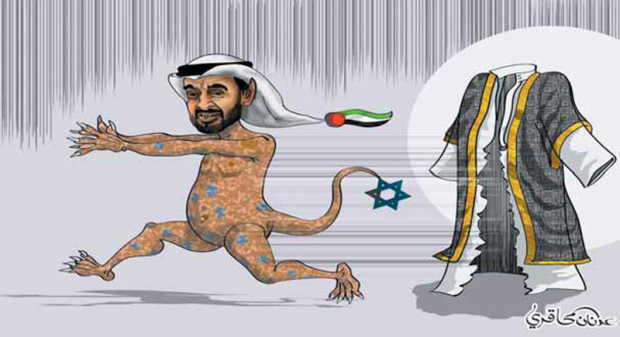 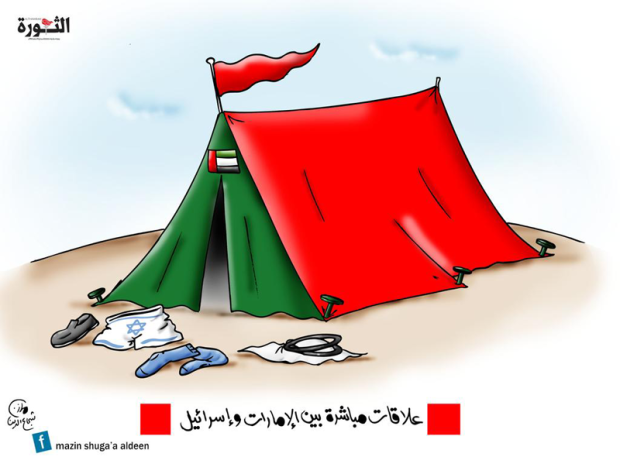 [Cartoon from the pro-Houthi Sanaa News Agency (Yemen), caption on bottom says “direct relations between the Emirates and Israel,” August 13, 2020] 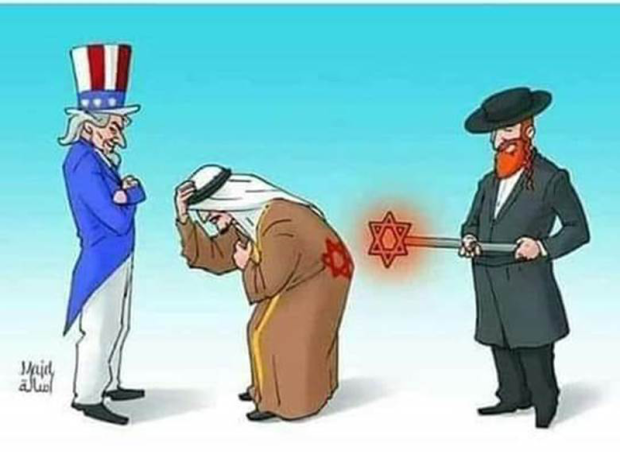 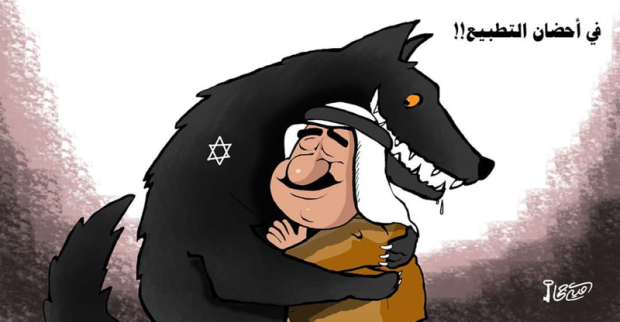 [Cartoon from the pro-Hamas Shehab News Agency, caption says “in the embrace of normalization!!” August 14, 2020] 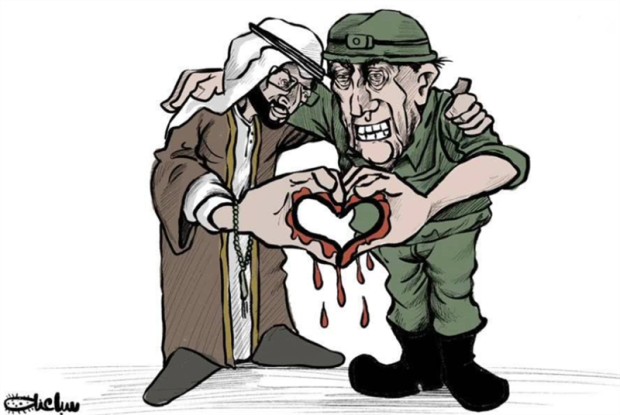 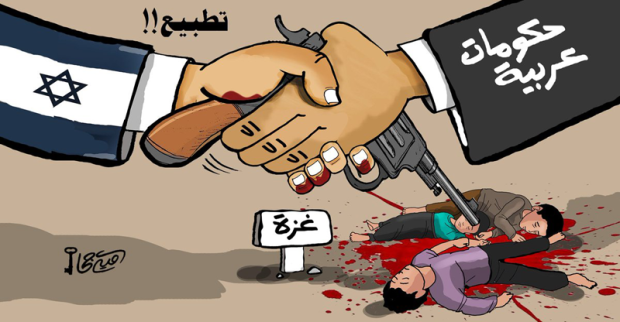 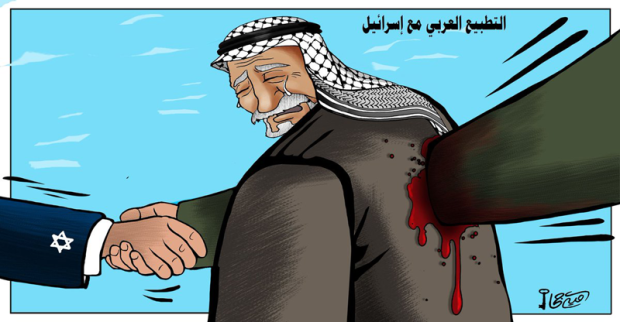 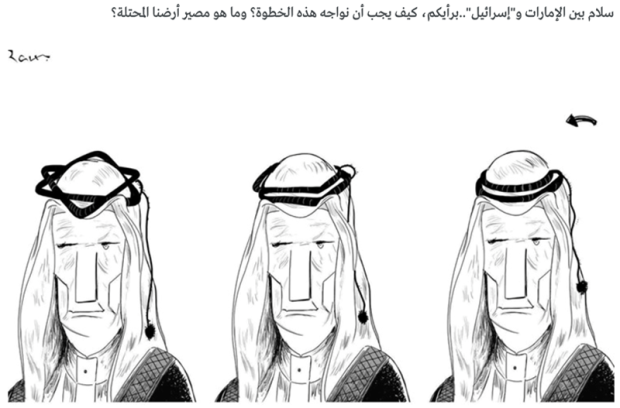 [Cartoon from pro-Iran news site al-Mayadeen (Lebanon).  Text above the cartoon says “Peace between the Emirates and “Israel”.  In your opinion, how must we face this step?  And what is the fate of our occupied land?”] 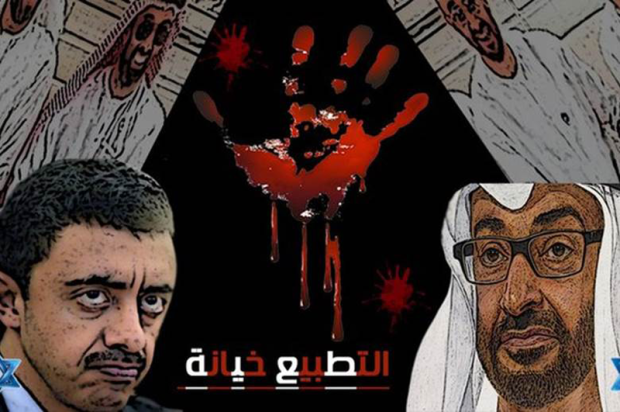 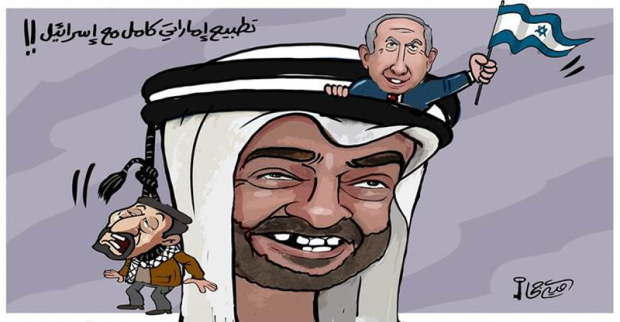 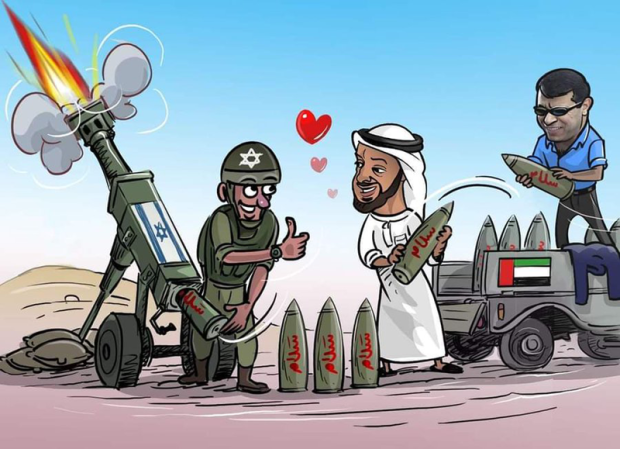 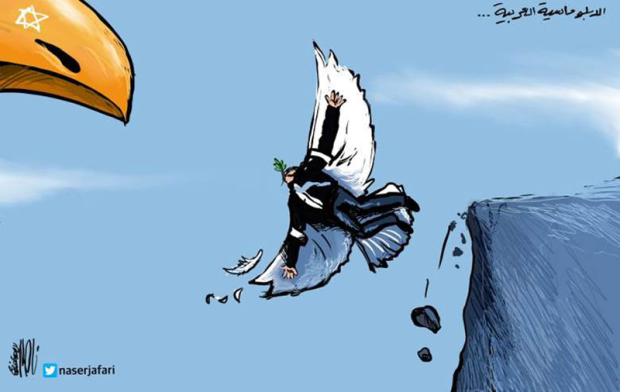 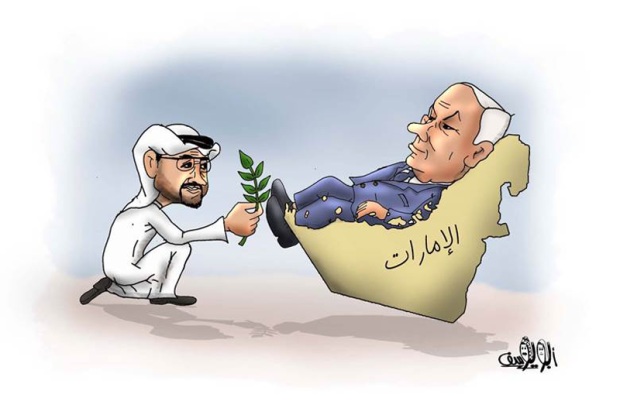 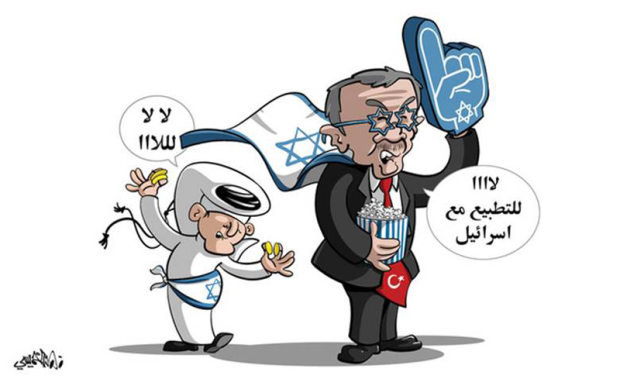 [Cartoon from Saudi newspaper al-Eqtisadiyah, criticizing Turkish President Erdogan (who opposed the recent peace agreement) by suggesting he in fact loves Israel.  Caption on right says “Noooo to normalization with Israel”.  Caption on the left says “no no nooo”. August 15, 2020]