Iran Trains Young Children for Warfare Against US and Israel

As the media focuses on all that is allegedly “new “ in Iran, with new elected representatives and new business opportunities,  young children in the Islamic Republic are being trained in decades-old Iranian propaganda, violence and hate, with the goal of “conquering Tel Aviv”. 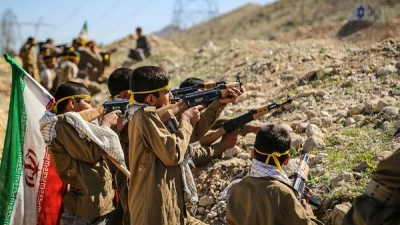 As part of last month’s Fajr Decade celebrations (the anniversary of Islamic Revolution), Iranian officials in the city of Lamard organized the “Sixth National Children’s Memorial”, an event which trains children for warfare against the US and Israel. According to reports, as many as 1,200 children participated in the event, with some dressed in military apparel. The event included forms of target practice with weapons, running through obstacle courses and learning about “conquering of Tel-Aviv and Jerusalem” as “holy values.” One photo from the event shows a young boy holding an Israeli flag which he is preparing to set alight in a nearby bonfire.

Iran (which infamously sent in child soldiers during the Iran-Iraq War in the 1980s) is a signatory to an international protocol of the Convention of the Rights of Children which says:  “States Parties shall refrain from recruiting any person who has not attained the age of fifteen years into their armed forces...” and “States Parties shall take all feasible measures to ensure that persons who have not attained the age of fifteen years do not take a direct part in hostilities. “   While such trainings may not constitute explicit recruitment or involvement in hostilities, with sessions such as these, Iran’s power brokers are educating, motivating and training for hostilities against Israel in the future.