Iran’s newest “Holocaust contest” exhibition opened on May 14 in a gallery in Tehran. According to Iranian news reports, the contest received over 864 submissions from participants around the world.  Of those, 150 cartoons from 50 countries were accepted, with representation of cartoonists from Brazil, China, Colombia, France, Indonesia, Peru, Syria, Turkey and Yemen, among others.

Contest organizer Masoud Shojai Tabatabaei insisted the event was not to deny or celebrate the Nazi Holocaust, but to call out the “Holocaust” being witnessed with “the big killings by the Zionist regime in Gaza and Palestine.” 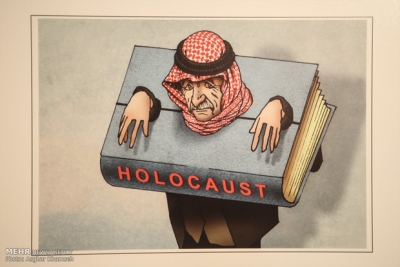 Of course this is not the first such contest held in Iran, nor the first time the Iranian government and its organs have politicized, denied and abused the memory of the Holocaust and its victims.

In the exhibition, the cartoons are divided into two themes. The first relate to the Holocaust; the second compare Israeli Prime Minister Netanyahu to Hitler. Photos from the exhibition reveal cartoons featuring swastikas and other anti-Semitic imagery.

The contest has earned the condemnation of the State Department (“abhorrent”), UNESCO (“goes against the universal values of tolerance and respect”) and the German Foreign Ministry (“the murder of 6 million men, women and children during the Holocaust, for which we Germans bear guilt and responsibility, must not be abandoned to ridicule”).

The contest winners will be announced on May 30.

If you're wondering how much one can earn from a cartoon lampooning or diminishing an act which killed six million Jews, it is reported that the winning cartoon will be awarded a sum of $12,000.