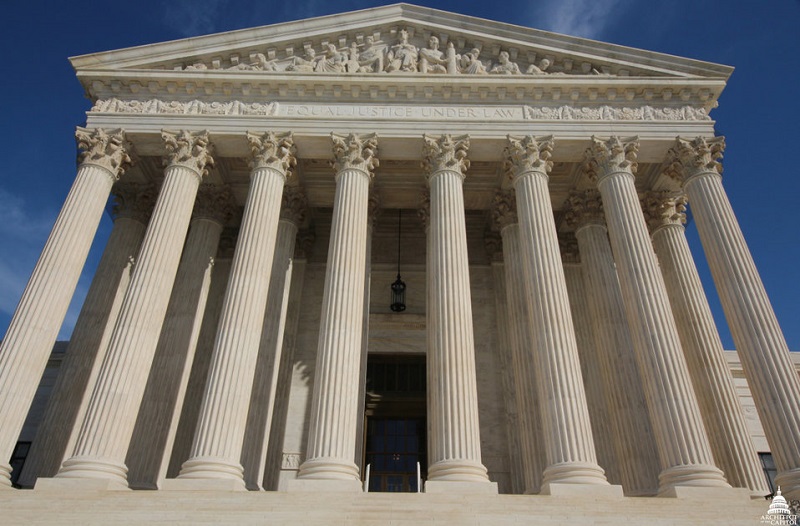 Last week brought two major civil rights victories from the Supreme Court -- two bright lights even as protests for racial justice continue, healthcare for transgender people is undermined, and  asylum law and process is under attack. As an organization that has long fought for civil rights, including for LGBTQ+  and  immigrants’ rights, ADL is proud to have joined the struggle and raised its voice in support of both cases that the Court ruled on and we celebrate these historic victories.

On June 15, 2020, the Supreme Court ruled 6-3 in Bostock v. Clayton County that it is illegal for “an employer to discriminate against employees for being homosexual or transgender” under Title VII of the 1964 Civil Rights Act’s prohibition against workplace discrimination based on sex. This case marked the first time that an openly transgender lawyer, Chase Strangio, argued before the Supreme Court. Before this ruling, employment protections for LGBTQ+ individuals were only guaranteed by law in 21 states, the District of Columbia, Guam, and Puerto Rico. This meant that, in over half the country, it was legal to fire someone for their sexual orientation or gender identity. ADL joined a coalition of 59 civil rights organizations on an amicus brief arguing, among other things, that the legislative intent and statutory text of the law supported application to sexual orientation and gender orientation and that such an interpretation was also necessary to prevent backsliding on existing Title VII protections against racial discrimination and other forms of discrimination. Indeed, LGBTQ employees of color are among those in most need of such protection.

This historic ruling was especially bittersweet in light of the recent death of Aimee Stephens, one of the plaintiffs in this case who passed away before seeing her victory in court. The fight for equal rights is far from over, however; the ruling leaves open the possibility that employers could fire LGBTQ+ employees if the employer has a religious objection to having LGBTQ+ employees. Moreover, the struggle for justice continues outside of the workplace.  As the Black Trans Lives Matter rally highlighted, Black trans people continue to be targets of hate and  violence and we mourn the recent murders of Dominique "Rem'mie" Fells and Riah Milton.

Giving the civil rights community more reason to be hopeful this week, the Supreme Court issued a ruling on June 18, 2020 that blocked the Trump administration’s attempt to end DACA (Deferred Action for Childhood Arrivals) in a 5-4 decision. The DACA program was created by President Obama in 2012 by executive order and granted work authorization and relief from deportation — subject to eligibility and agency approval — to undocumented immigrants brought to the United States as children before 2007. The current Administration’s decision to rescind DACA unjustifiably and cruelly disrupted the lives of the approximately 800,000 DACA recipients and their families. ADL joined a coalition of civil rights organizations in an amicus brief supporting DACA recipients in challenging that decision.

The Supreme Court ruling says that the decision to stop the DACA program was “arbitrary and capricious” - in other words, it was made without a valid justification. The ruling restores the DACA policy and enables current recipients to renew their enrollment and new applications to be submitted. The ruling leaves open the possibility that the Administration could still try to end DACA again in the future by giving a proper justification. There is still a lot of work to be done in urging the Administration to continue the program and provide permanent legal status to DACA holders. This ruling represents the culmination of years of hard work by courageous DACA recipients, young immigrants, and their allies to fight for the rights of immigrants.

Congress must pass meaningful immigration reform to provide permanent protections for DACA recipients that cannot be undone on the whims of any Administration. While we urge the United States Customs and Immigration Services (USCIS) to begin processing DACA applications and renewals immediately, we also call on Congress to pass meaningful reform that will provide a pathway to citizenship for DACA holders. And while our nation continues to grapple with the COVID-19 pandemic, DACA holders should be safe from deportation as well as protected by any Federal stimulus packages. You can support immigrants in your community by advocating for a permanent solution; educating yourself about immigration issues like DACA, Temporary Protected Status (TPS), and detention; and talking to the people in your life about these issues.

Ultimately, while there is still work to be done, these decisions represent major civil rights victories that we can all celebrate.

Table Talk: What is DACA and Who Are the DREAMers?

Myths and Facts About Immigrants and Immigration (also En Español)