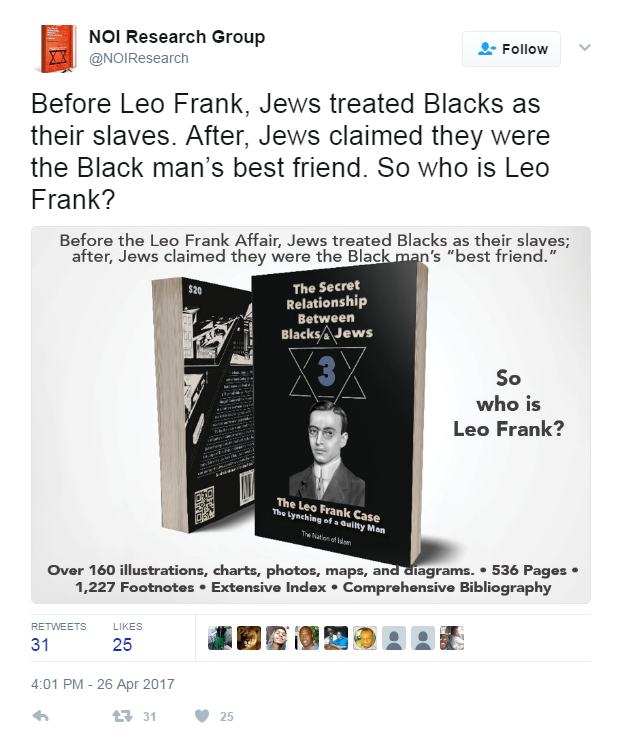 Once again, Louis Farrakhan has reinforced his position as one of the leading anti-Semites in the United States. In his words and writings since the beginning of 2017 he has continued to preach to his followers that Jews are satanic conspirators who represent the epitome of evil in the modern world. He uses his propaganda machine, which includes a network of Nation of Islam mosques, a weekly newspaper, a “research institute,” occasional speeches, and a robust social media presence to disseminate the notion that Jews are collectively responsible for inhibiting upward mobility in the African-American community, conducting the 9/11 terrorist attacks, and even being responsible for the rise of the Ku Klux Klan in the early 20th century.

Days after Omarosa Manigault, a White House aide, appeared on a morning radio show on Chicago’s WVON saying she would be honored to meet with Farrakhan at the White House, Farrakhan gave an interview on the same station with Cliff Kelly. After a two hour tirade, Farrakhan concluded by calling for Iran, Saudi Arabia, and the broader Muslim world to unite in opposition to the existence of the State of Israel, and predicted that in the near future Jews will no longer be able to live in their historic homeland.

Farrakhan continues preaching unreconstructed anti-Semitism from his pulpit. In part two of Saviours’ Day 2017, Farrakhan taught that contemporary Jews are “not really Jews but are in fact Satan.” He went on to describe Jews as “great and master deceiver[s], and encouraged his followers to consider Jews “the enemy of God and the enemy of the righteous.” He also alleged that all Jews, including Donald Trump’s son-in-law Jared Kushner, are disloyal to the United States:

When you say, Mr. Trump, ‘America first,’ ask any Jew, even your son-in-law. America is never first, Israel is always first. And as long as Israel is first then whatever you think or plan will be in Israel before you leave the room in the White House. Mr. Trump, you have to extricate yourself from being controlled by any one of these.

Farrakhan and the Nation of Islam continue propping up the 9/11 “truth” movement, alleging the existence of a Jewish/Zionist conspiracy to perpetrate the terrorist attacks as a way tricking the United States into waging war on Israel’s enemies. In part one of Nation of Islam’s annual Saviours’ Day, Farrakhan hosted well-known anti-Semitic agitators Christopher Bollyn and Kevin Barrett on a plenary entitled “The War on Islam: 9/11 Revisited, Uncovered & Exposed.” Reflecting on the session in the NOI’s newspaper, Wesley Muhammad, a student minister in the Nation of Islam, lauded the speakers and said that Farrakhan and the panel had proven to him that “this is a war on Islam and the war is orchestrated in DC, but ultimately in Israel.”

The Nation of Islam remains committed to distorting the relationship between blacks and Jews. For years, NOI claimed that Jews were the architects of the transatlantic slave trade; more recently, they issued new “research” alleging that in the early 20th century “Jewish businessmen” worked to subjugate black people and enrich themselves by masterminding the rebirth of the Ku Klux Klan. NOI also claims that Jews were secretly responsible for the lynching of Leo Frank, a Jewish man who was falsely accused of murdering a white Christian girl in 1913 (Frank was posthumously exonerated by the state of Georgia in 1986).

ADL’s Center on Extremism has long monitored Farrakhan the Nation of Islam, and has documented his record of bigotry and anti-Semitism in “Louis Farrakhan in His Own Words.”