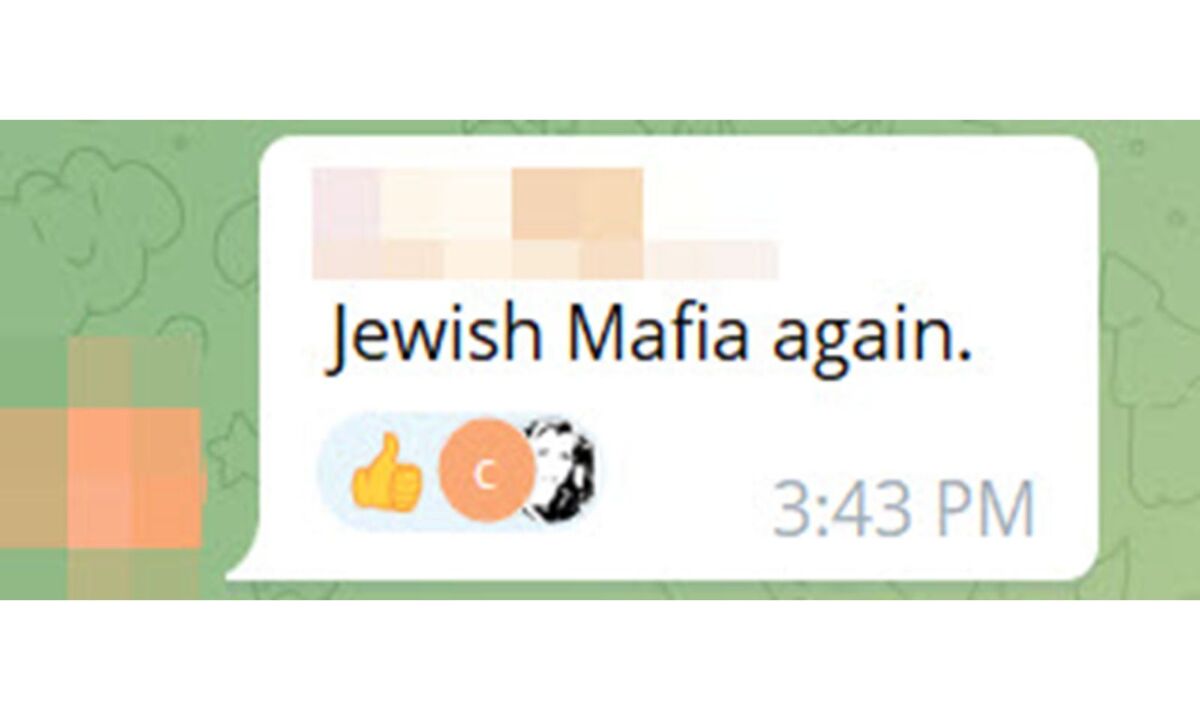 Antisemitic conspiracy theories circulated widely on social media after Florida magistrate judge Bruce Reinhart was identified as the signor of the warrant that granted FBI agents access to former President Trump’s Mar-a-Lago home on August 8, 2022. Extremist groups and influencers have used Reinhart’s faith as ammunition to promote unfounded claims that Jewish individuals are controlling the FBI and other government entities in order to take down Donald Trump and defend the “deep state.”

In general, there has been a significant amount of antisemitic hate speech and conspiracy theories permeating in online spaces in response to the Mar-a-Lago search. For example, Andrew Anglin published a piece on his neo-Nazi website The Daily Stormer, positing the various ways that America’s “Jew government” is plotting their revenge – against either Trump or Russia – as evidenced by the FBI’s recent actions in Mar-a-Lago. In the article, he states that “extremist pro-war Jews are currently arguing with extremist political Democrat Jews.” 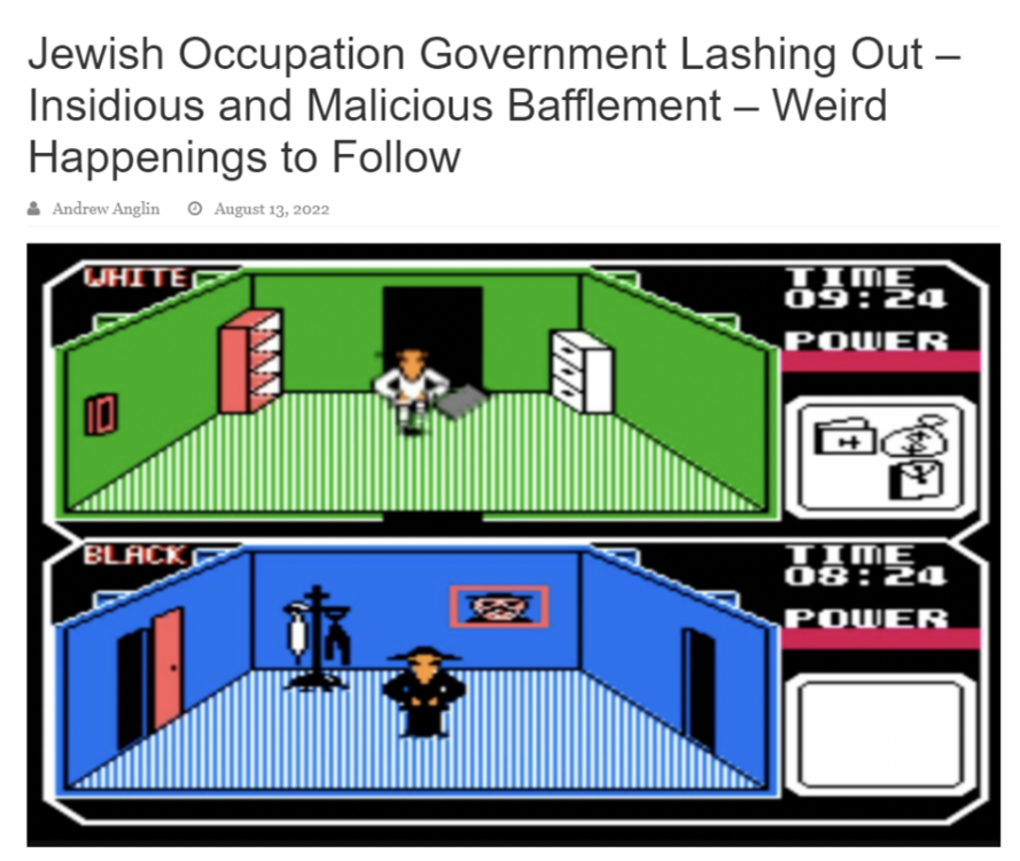 In another neo-Nazi publication, National Vanguard, an article responding to the Mar-a-Lago search includes hypotheses about why “the Jews hate Trump.” The author incorporates aspects of the Great Replacement conspiracy theory, claiming that “Jews viscerally hate Whites, and are wiping them from the face of the Earth. Despite Trump not caring about Whites any more than they do, Jewry’s hotheaded linkage proved fatal to him.”

Some antisemitic Telegram channels shared similar theories, claiming that Jews are simply afraid of Trump accessing power and that Mar-a-Lago is evidence of “just how tenuous the Jewish stranglehold on power is right now.” 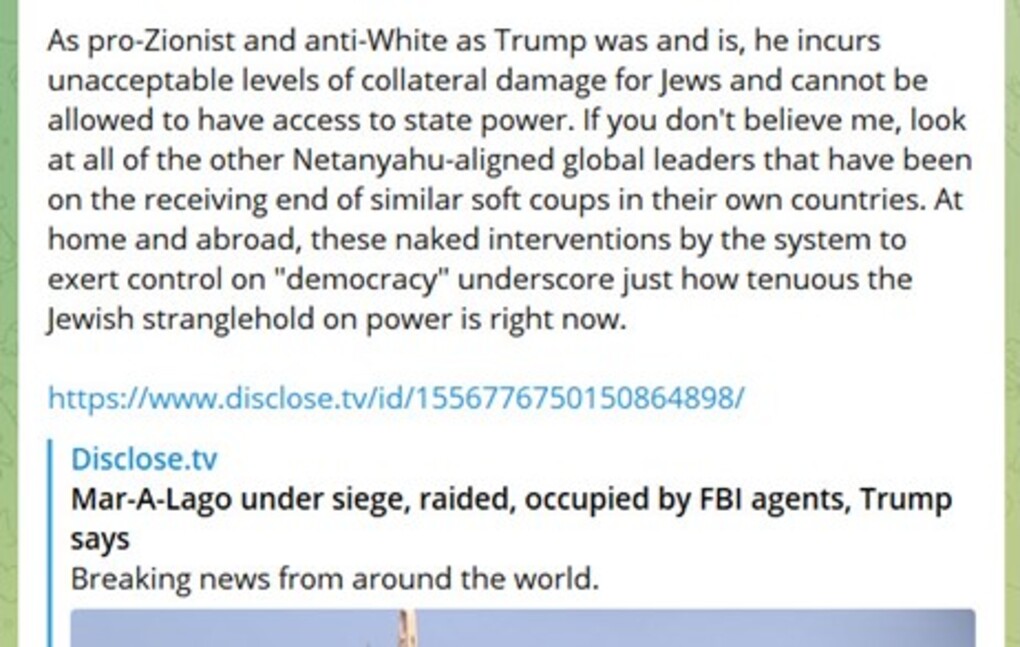 However, a notable portion of the post-Mar-a-Lago search antisemitic conspiracy theories have been directed specifically at Reinhart. These narratives incorporate other public figures as well as general paranoia about his perceived involvement in an all-powerful “Jewish cabal.”

Misleading headlines and social media posts initially claimed that Reinhart was a lawyer for Jeffrey Epstein, who was charged with sex trafficking underage girls before committing suicide in 2019. In reality, reports say that Reinhart legally represented associates of Epstein, not Epstein himself. A doctored image showing Reinhart with Epstein affiliate Ghislaine Maxwell has also been misinterpreted as genuine on social media and in the news, despite a number of fact checks debunking it. Yet false claims that Reinhart both represented and supported Epstein have persisted, often alongside antisemitic hate speech. On Telegram, one user wrote, “Reinhart is J*wish just like Epstein! They seem to take care of their own at all costs.”

This rhetoric also appears on mainstream social media sites like Twitter, where one user alleges that Reinhart “used to work for Jeffrey Epstein” and is part of the “Jew World Order” (a pun related to “New World Order”). 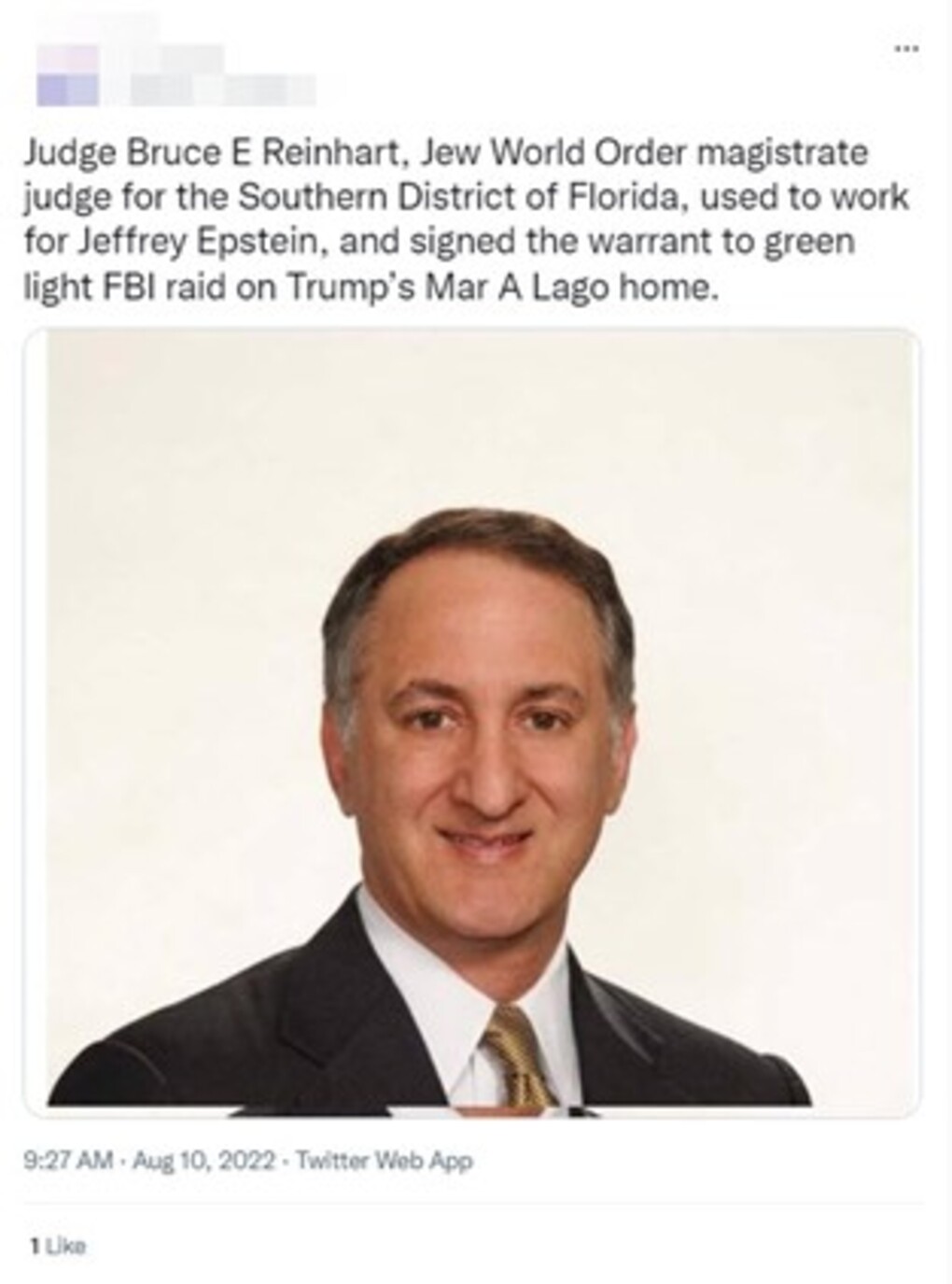 Antisemitic posts about Reinhart also mention Attorney General Merrick Garland as proof that multiple Jewish figures in the government are conspiring against Trump. Users on the anonymous message board 4chan suggest that Jews were also behind Trump’s impeachment, claiming that Reinhart, Garland and Democrat lawyers are trying to “incite a violent reaction” while playing the victim – because, according to them, “nothing makes a Jew happier.”

Similarly, a tweet pointing out Garland and Reinhart references the phrase “they cry out in pain as they strike you” – a trope often used by antisemites to depict Jews as playing the victims as they carry out evil actions. 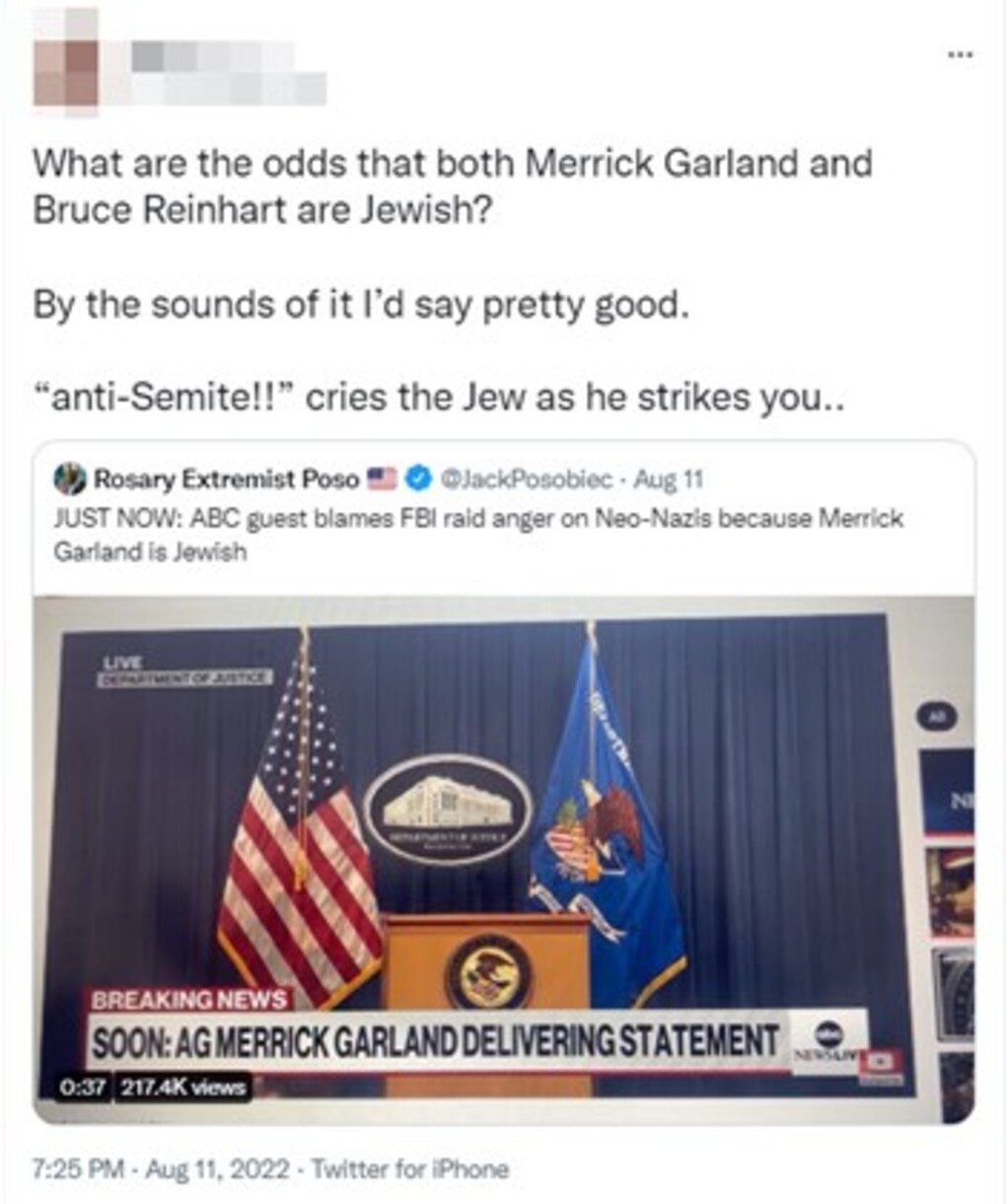 In a video posted on August 12, 2022, antisemite and conspiracy theorist Brother Nathanael uses a series of offensive slurs to discuss those who approved of the Mar-a-Lago search, describing Garland as “the Jew Garland and his tribe in the political and media hive.” 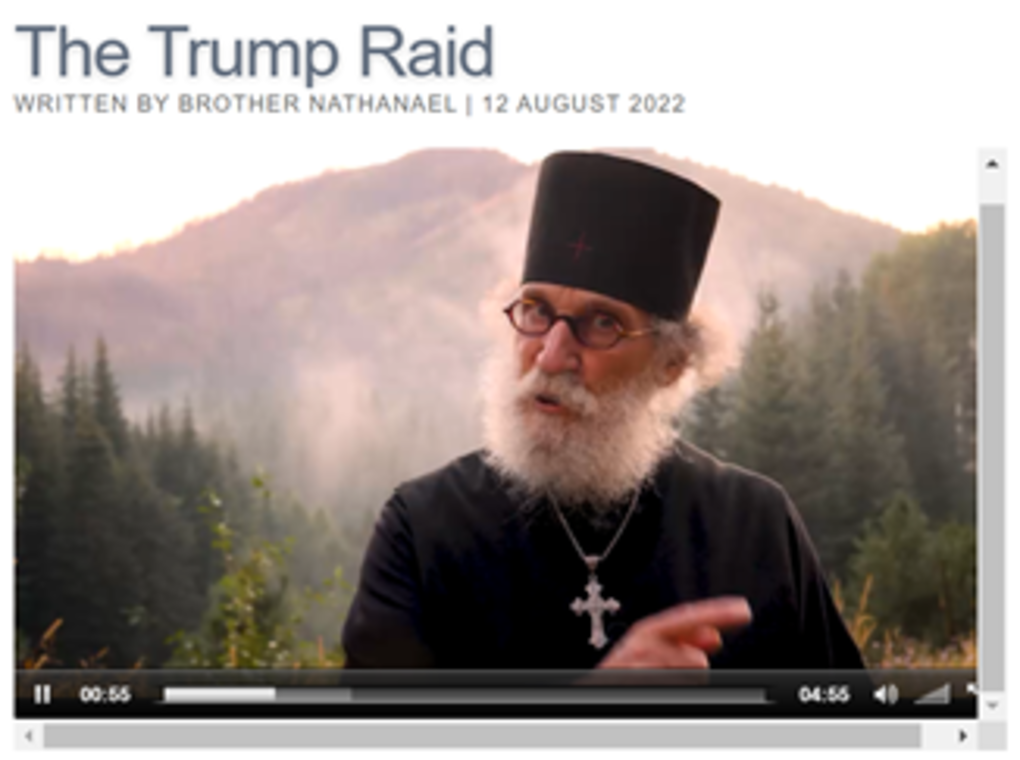 Far-right influencer Vincent James shared a similar theory on an August 12, 2022, episode of his show The Red Elephants, stating sarcastically that “it just so happens to be the case, which is completely a coincidence, completely random, that Merrick Garland is Jewish and the...the judge that approved the raid is Jewish and...and works with Jeff Epstein who is also Jewish.” 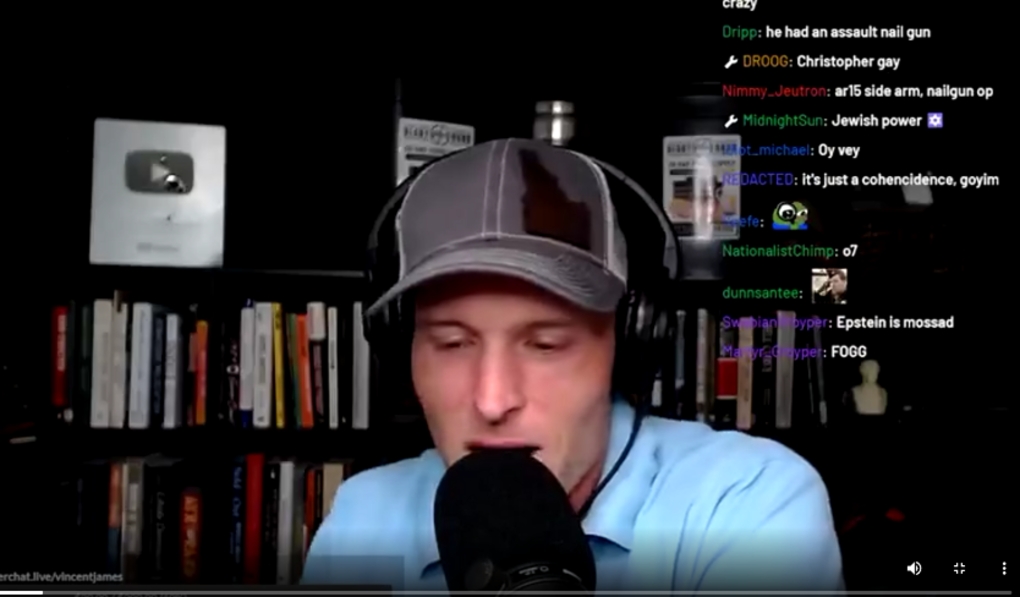 In an earlier stream from August 10, 2022, James and his viewers reference something called “the Jew coup,” insinuating that a group of Jewish government officials including Reinhart are secretly responsible for actions against Trump in order to reclaim their power.

Multiple users on Telegram and Twitter also allege that Reinhart and Garland are both part of a powerful “Jewish mafia” or “Khazarian Jew Mafia,” which is a popular antisemitic and conspiratorial trope.

The hate-filled conspiracy theories surrounding the Mar-a-Lago search has already led to harmful offline effects, which can worsen as more information is revealed. Due to concerns for Reinhart's safety, his listing was removed from an affiliated court website shortly after his name started to make its way through social media. Reinhart’s synagogue has also been on high alert after users shared his affiliation, which prompted a flood of threatening vitriol that forced them to cancel or relocate services.