As a professional in the Jewish community who works on interfaith relations, I am often asked “why aren’t Muslims speaking out against terrorism and ISIS?” The answer is that, in fact, many Muslims have done so. Equally important is for religious leaders to speak out and address the root causes of extremism in their community, and find ways of discouraging terrorist activity, particularly among youth who are considered among the most susceptible populations. In this regard, one of the most hopeful initiatives, something that has not gotten much attention in the mainstream media, is the “Marrakesh Declaration,” released at the end of last month.

The “Marrakesh Declaration” is the product of a gathering of Muslim leaders from more than 100 countries around the world sponsored by the Moroccan government and the Forum for Promoting Peace in Muslim Societies.  At the meeting, Muslim leaders heard several testimonies about the grave situation of various religious minorities in Muslim-majority countries. 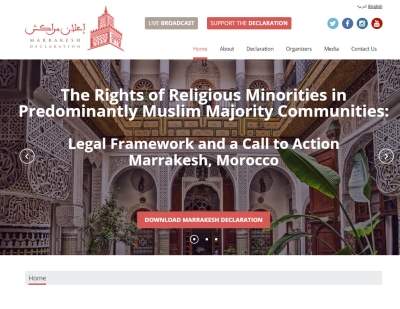 At the end of the meeting, the Muslim scholars who gathered in Marrakesh released the “Marrakesh Declaration,” a brief statement that in which they:

Lest anyone think that this is a departure from “traditional” Islamic teaching, the Marrakesh Declaration explicitly traces its ancestry to the Charter (or Constitution) of Medina.  According to Muslim tradition, this Charter was written by the prophet Muhammad in 622 C.E. in an effort to end political strife in the city; it guarantees autonomy and freedom of religion to the residence of Medina, including, explicitly, its Jewish population.  While the Charter is not a modern document and reflects the historical setting in which it was created, the principle of religious freedom is found in the Quran itself and other classic Islamic sources.

The threat of Muslim extremism is real, dangerous, and must be taken seriously; even though it represents a small minority of Muslims, we have witnessed its tragic consequences.  The vast majority of Muslims (and let us not forget that it is Muslims themselves who are most often the target of these extremists) reject the terrorists and their ideology.  The Marrakesh Declaration is an important, but certainly not the only, example of Muslims speaking unequivocally, from their own tradition, against extremism, terror, and the infringement of religious freedom.  It is a pity that this and other efforts have not garnered the attention they deserve.