As Americans, we remember the critical moment that turned around the campaign of intimidation by Senator Joe McCarthy in the 1950's. As the Senator was badgering another young American, this time a soldier, accusing him of communism and smearing his reputation, the counsel for the defense, Joseph Welch, suddenly blurted out: "Mr. McCarthy, have you no decency?"

That comment, seen by the nation in those early days of television, seemed to break the spell that the Wisconsin senator had held over significant portions of American society, ruining countless lives in the process.

It is our hope that Im Tirtzu's latest assault on the good name of some of Israel’s cultural icons - Amos Oz, Chava Alberstein, A.B. Yehoshua, David Grossman, to name a few - is the one step too far that awakens Israeli society to the dangers posed to democratic values from such assaults. 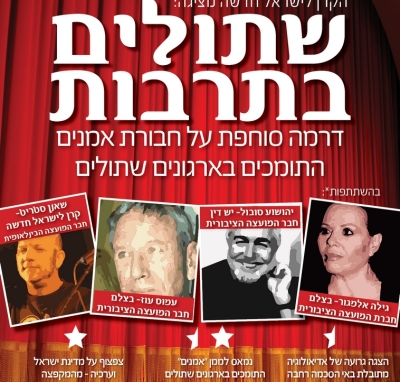 Israel faces many real security challenges, as evidenced by the horrific murders and attacks taking place almost daily, and the international assaults against Israel’s good name. Exactly because there are real threats is why protecting Israel’s democratic values becomes even more important. Respecting the right to free expression, despite moments of discomfit, ensures a full exchange of views on what's best for the country and offers the best chance of bringing people together. And internationally, it is Israel’s democratic ethos, unique to the Middle East, which gains Israel respect despite the hostile campaigns that are waged against it.

It is good to see that a number of Israeli government ministers, including the Prime Minister, have condemned the latest Im Tirtzu campaign. And it was appropriate that Im Tirtzu eventually issued an apology for their campaign maligning Israel’s cultural icons.

Now we can hope all sides, left and right, will take a step back and recommit to the fundamental protection of and respect for freedom of expression as at the core of Israel's values and well-being.