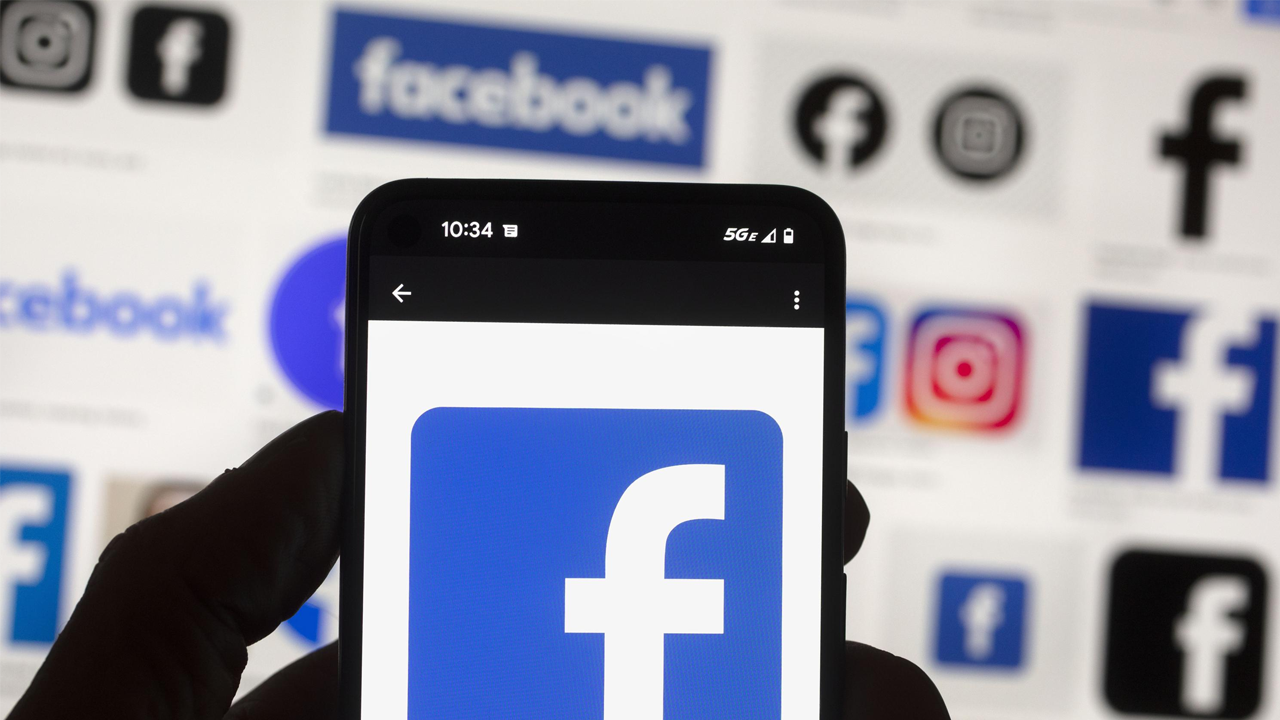 Meta has an extensive history of protecting its profits rather than its users. The company has been regularly criticized for allowing politicians to peddle disinformation in ads on its platforms, mislabeling political ads, and profiting from ads that promoted 2020 election conspiracy theories as well as white supremacy. Although Meta has claimed ads would no longer target people based on categories such as race, religion, politics, or sexual orientation, investigations found proxies for these identifying markers were used instead—for example, “Spanish language” instead of “Hispanic culture.” The danger of targeted ads is they can fuel racial discrimination or plunge users into toxic echo chambers. Hateful advertising has a destructive societal impact.

ADL researchers reviewed Meta’s advertisements from January through September 2022. This was done using the Ad Observatory tool created by NYU’s Cybersecurity for Democracy team, which provides access to a searchable dashboard of Meta’s political ads and Meta’s ad library.

ADL’s analysis found Meta has accepted large sums of money for ads on hateful topics such as antisemitism and transphobia. In some cases, Meta even accepted money for ads that violated its hate speech policy.

The term “globalist” is frequently used by antisemites as a codeword for Jews drawing upon several longstanding antisemitic tropes, suggesting they are disloyal to the countries they live in due to their interest in international finance. Between January and September 2022, political ads that referenced the term “globalist” primarily targeted Meta users located in Texas, with an average of 23,800 views per ad, and in Massachusetts, an average of 14,300 views.

The top sponsor of ads that referenced “globalist” was Drain the DC Swamp PAC. One of its ads shares a clip of former bounty hunter turned radio host Stew Peters interviewing South Dakota state representative Taffy Howard for his show. In the clip, Peters refers to the January 6 insurrectionists as “patriots who objected to a clearly fraudulent and stolen election.” He insists they are being “set up” by the “globalist cabal that’s hellbent on the destruction of our country.” Meta was paid between $10,000 to $15,000 for this ad which was viewed at least 700,000 times from May 19 to June 6, 2022. 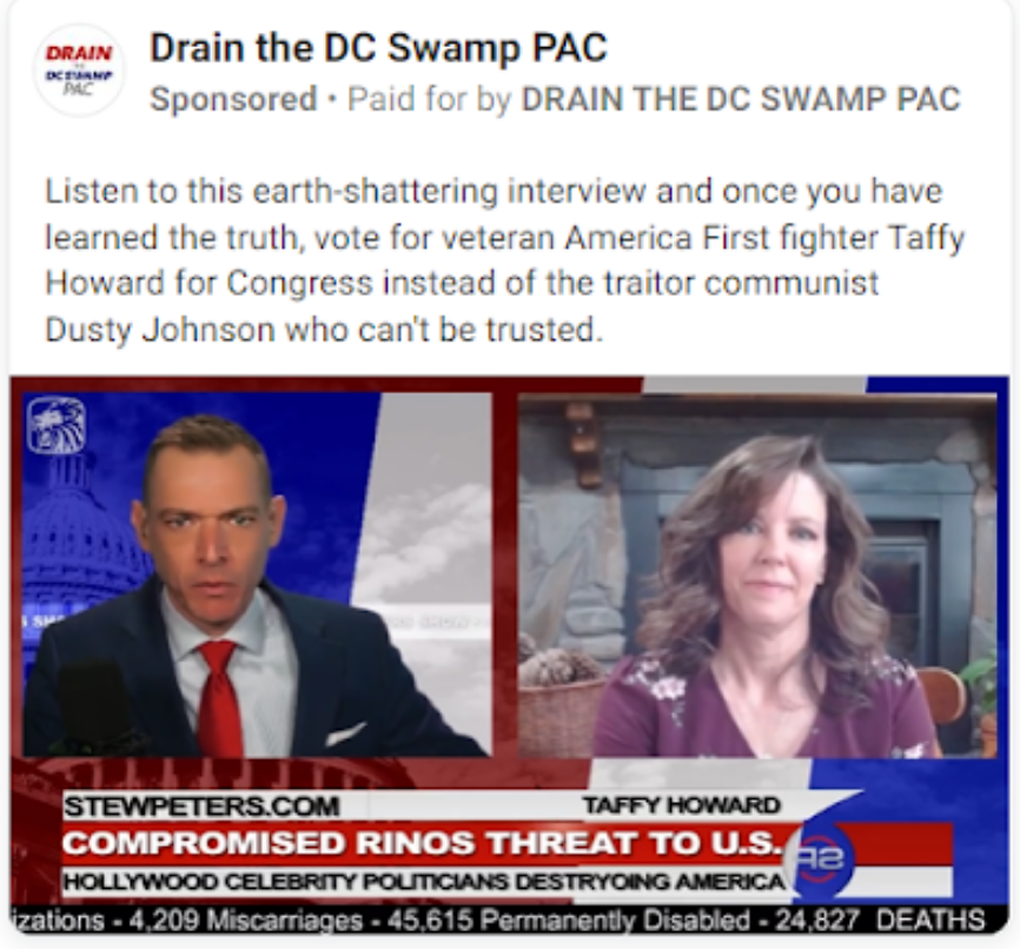 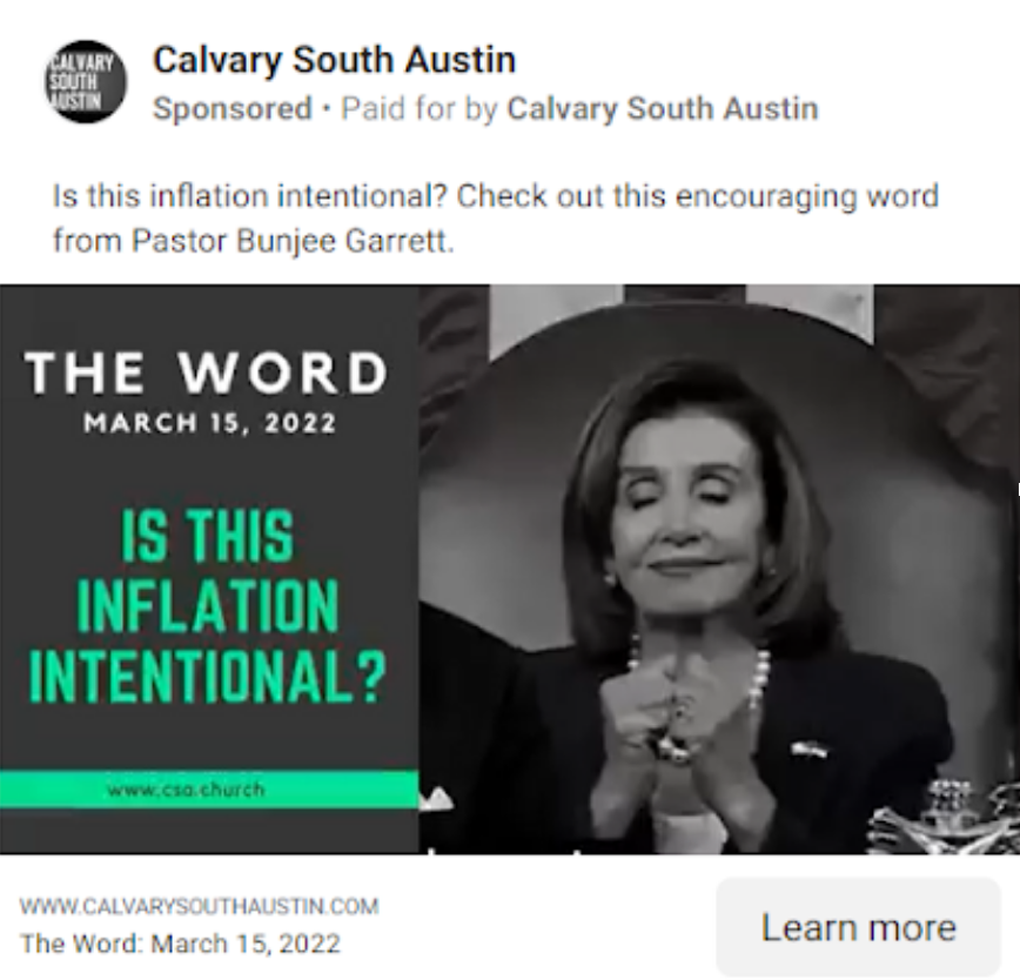 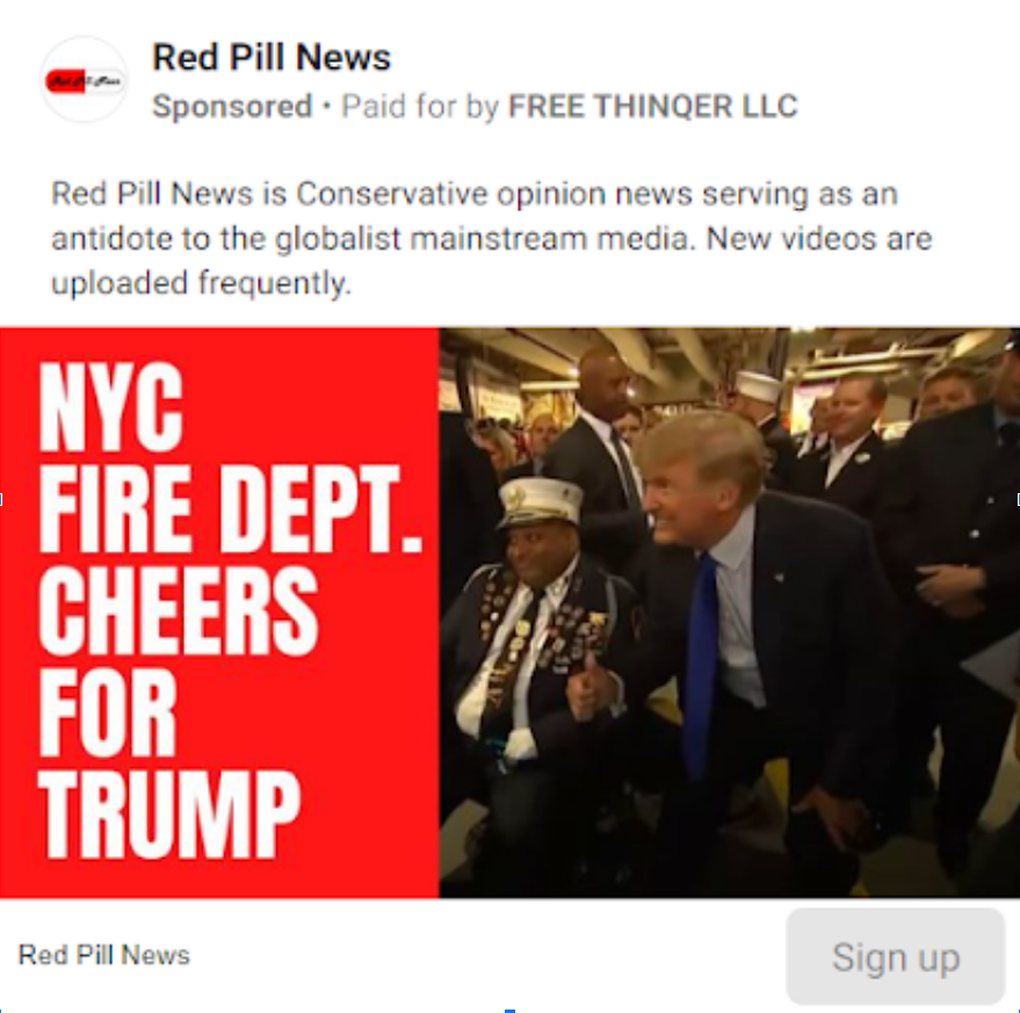 In an ad paid for by the Calvary South Austin church that ran on March 15-16,2022, Pastor Bunjee Garrett warns, “globalist leaders are deliberately attempting to destroy the economy here in America.” He goes on to describe how the current inflation rates are part of an intentional strategy to bring about the Great Reset. Adherents, who sometimes promote antisemitism as part of the conspiracy theory, argue global elites are attempting to use the Covid-19 pandemic to reorganize society with the ultimate goal of a global totalitarian regime. In several ads, Red Pill News also promotes itself as the “antidote to the globalist mainstream media.”

Similarly, George Soros is frequently mentioned in a pejorative and conspiratorial context in many political ads on Facebook and Instagram. The Jewish philanthropist and survivor of the Nazi occupation of Hungary is a popular bogeyman for far-right extremists who claim he is the puppet master of a global conspiracy.

Accusations that George Soros is intentionally destabilizing local communities and the United States are popular themes across Meta advertisements. One ad sponsored by Operation Sunlight reads, “Pals of Soros, and appears Soros himself are backing all these Nevadan candidates [sic].” It adds, “What are Soros and Pals known for?” The ad links to a blog post that says the financier is known for promoting Nazis as well as burning the Constitution. The blog warns, “These globalists want our county and state” and “If they win, you know damn good and well, our elections are 100% rigged.” The blog lists 11 Nevada candidates and exclaims, “Save Nevada, Don’t Let These Globalist Tools Destroy Your Family!” The ad was active from September 19 to October 22, 2022, and viewed between 15,000-20,000 times.

Another ad sponsored by Capital Research Center shows a clip of NewsMax’s Rob Schmitt in a segment titled “Soros: Politics of Crime.” Schmitt accuses Soros of “[finding] some way to profit off the demise of law and order in this country” and adds that he has done this before. He suggests that Soros has a “secret agenda” beyond his philanthropy. The ad was active between August 10-13, 2022, and was viewed 90,000 to 100,000 times. 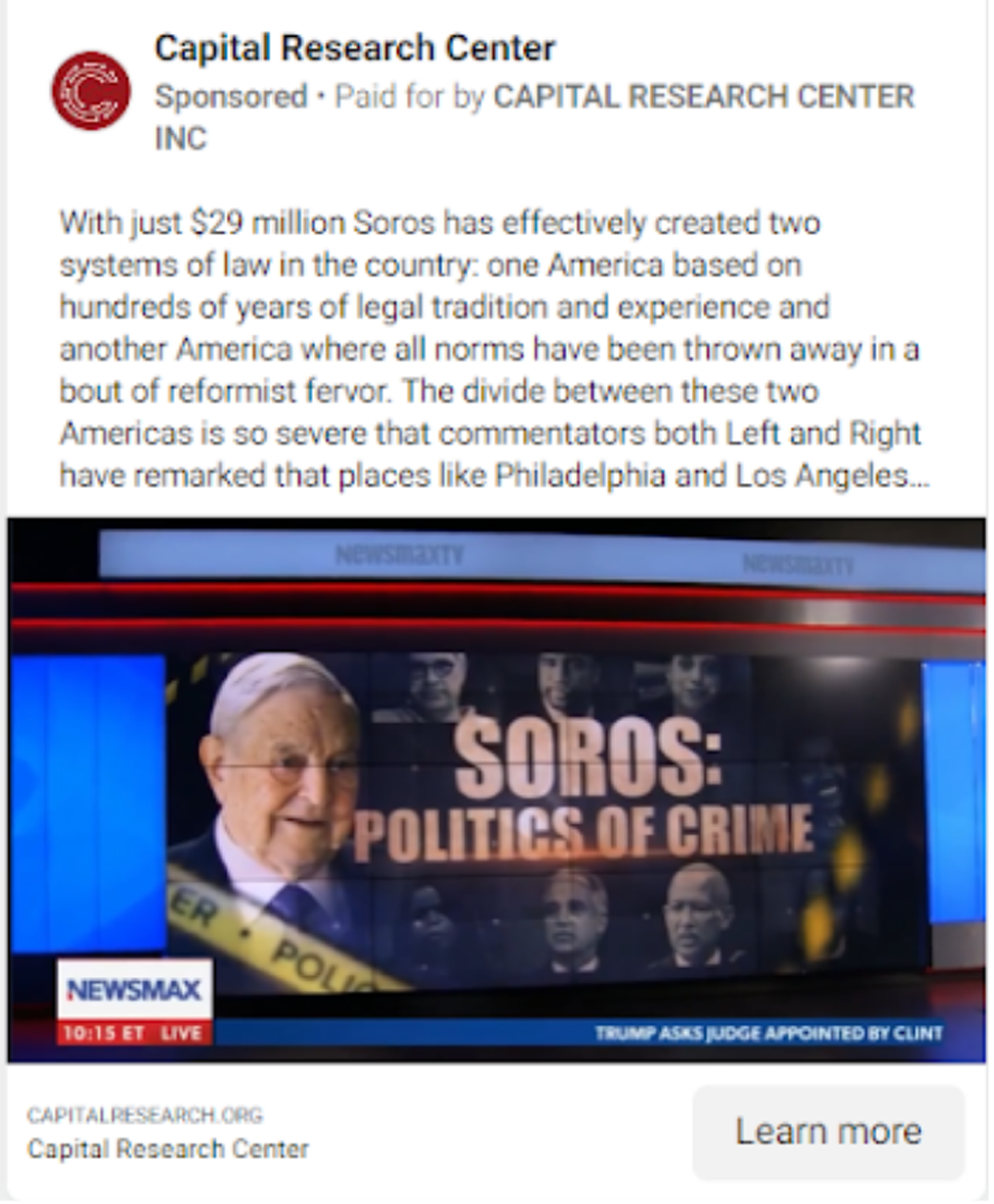 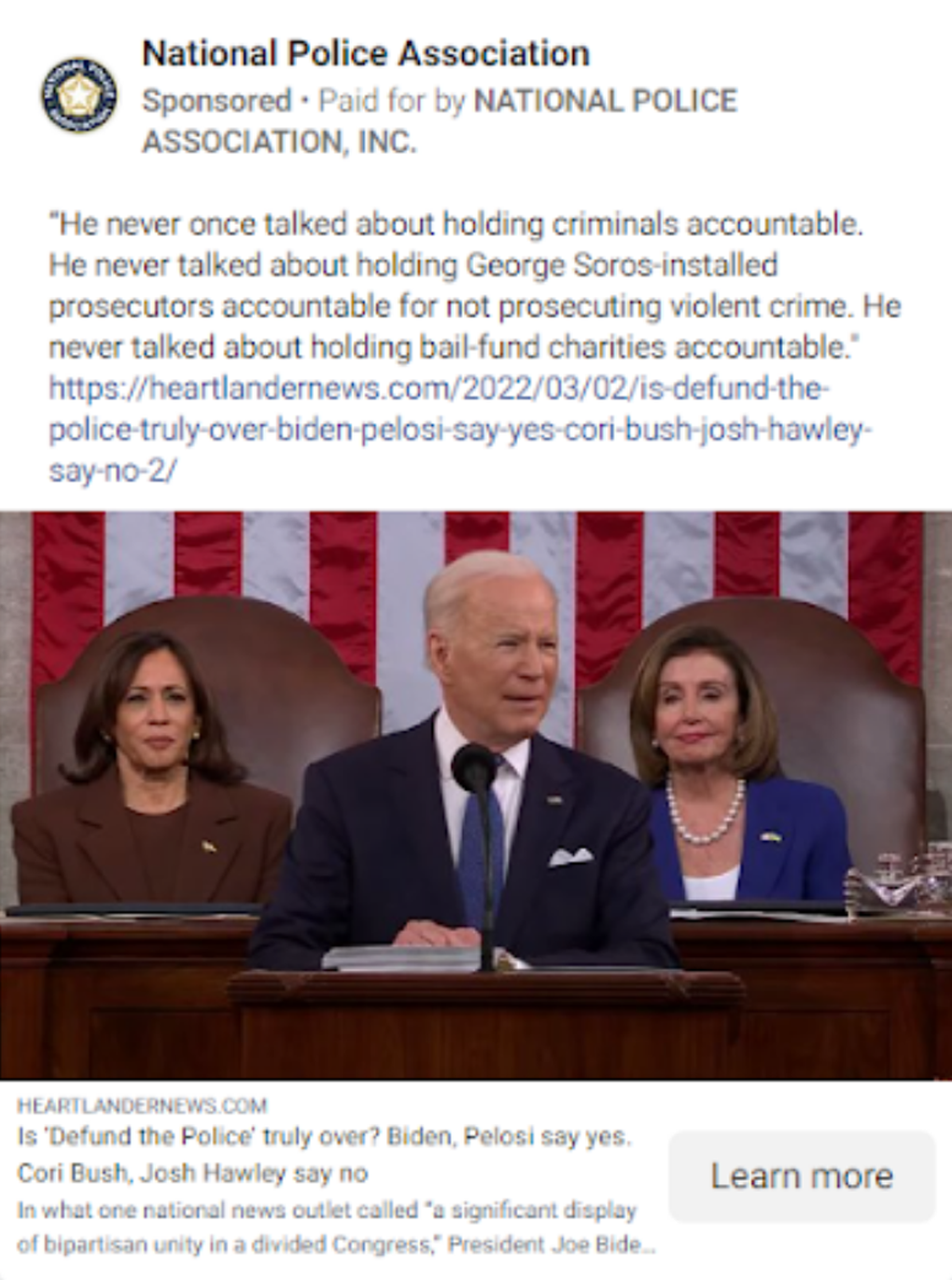 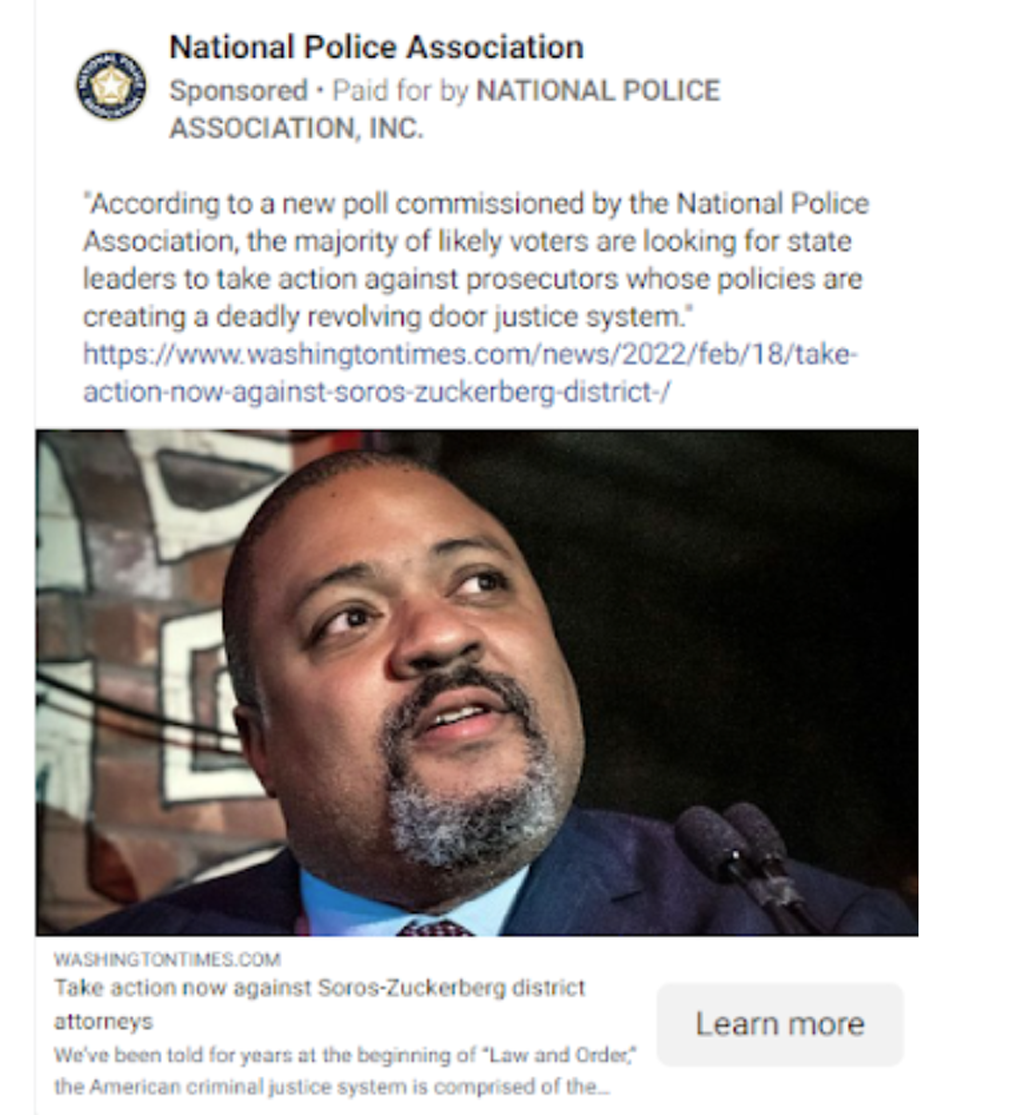 Similarly, the National Police Association sponsored several ads that call out Soros. One ad viewed at least 20,000 times accuses “George Soros-installed prosecutors” of “not prosecuting violent crime.” In another ad viewed at least 90,000 times between February 19-22, 2022, the Association encourages its supporters to “Take action now against Soros-Zuckerberg district attorneys.” Soros-related conspiracies often weave together age-old antisemitic tropes about Jewish control and plots to destabilize society. While not all those who promote these conspiracies have antisemitic motives, Soros’ Jewish identity is well-known and these narratives further antisemitism.

ADL researchers also identified numerous political advertisements on Meta that promote transphobic accusations. Anti-LGBTQ+ figures have been misappropriating the terms “grooming” and “groomer” to suggest members of the LGBTQ+ community are pedophiles who are trying to sexualize and recruit children by teaching young people about sexual orientation and gender identity. Despite Meta forbidding baseless accusations of “grooming” that target the LGBTQ+ community because they violate its hate speech policy, the company continues to profit off political ads promoting such hateful messages.

The Truth and Liberty Coalition paid for three ads from August 30 until September 10, 2022, promoting its 2022 conference with the text, “Protecting children from LGBT grooming.” The Truth and Liberty Coalition is a non-profit founded by far-right homophobe Andrew Wommack, who previously suggested queer people should wear labels on their foreheads saying, “This could be hazardous to your health.” Similarly, in an ad that was active throughout September, Our Fight Inc. presents teachers who discuss sexual orientation in the classroom and refuse to out students to their parents as pedophiles. The text of the ad states a teacher who “discusses sex and orientation with your students and instructs them not to tell their parents” is a groomer. 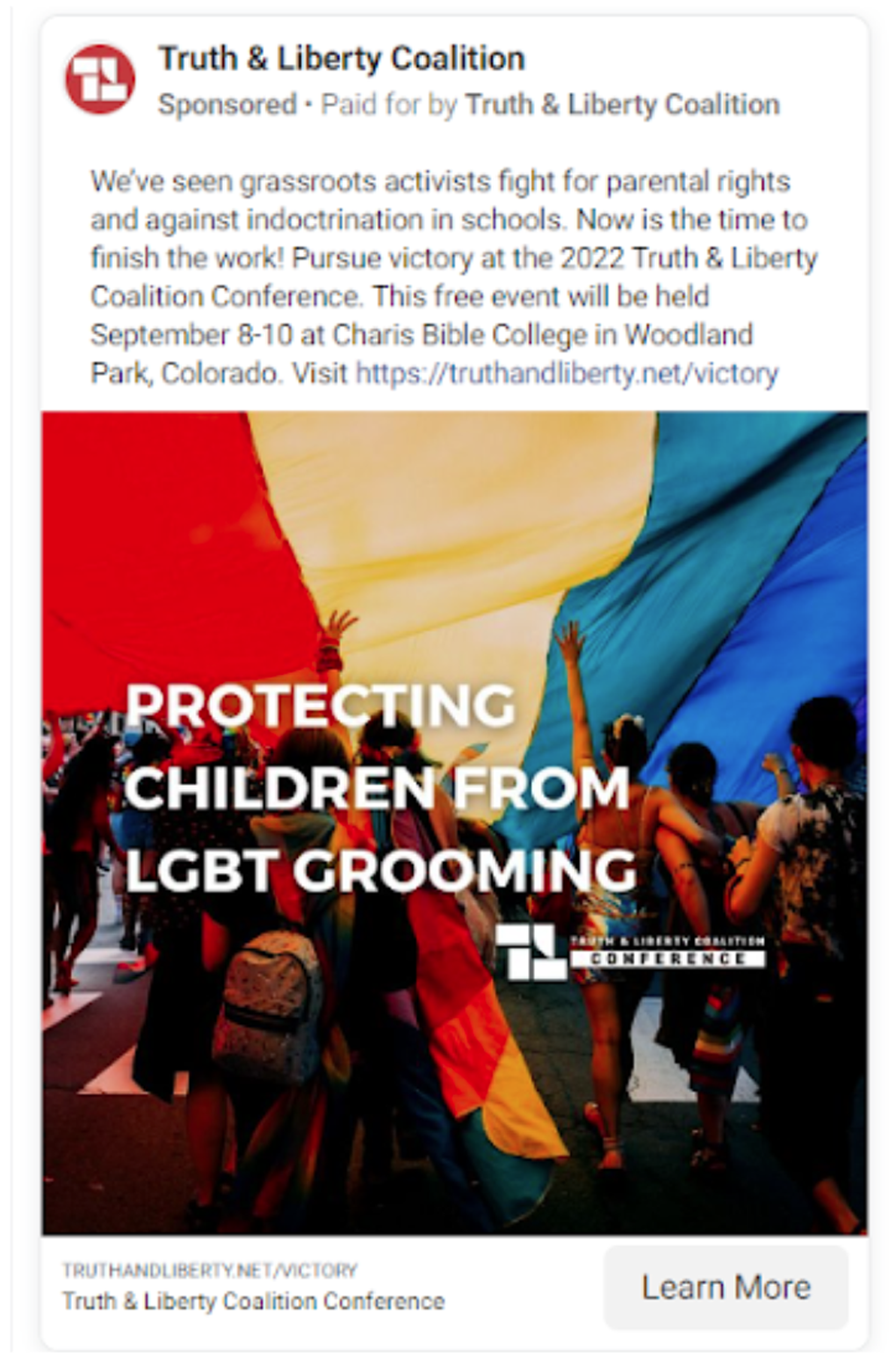 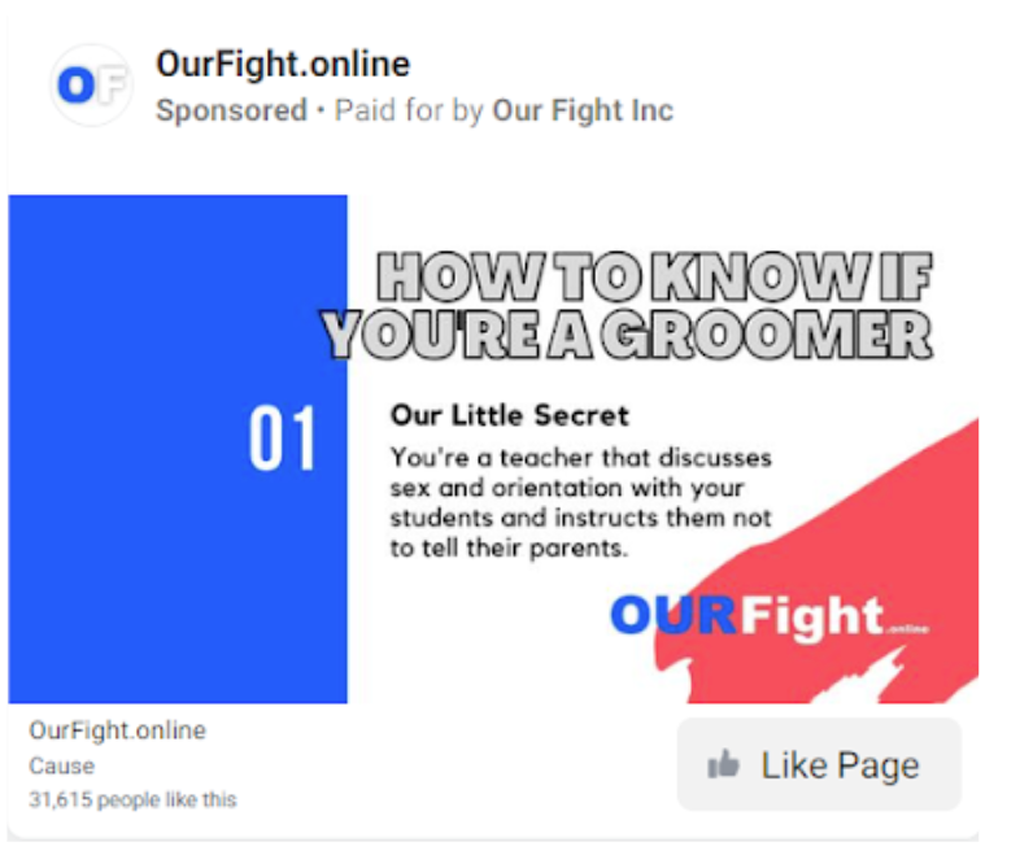 Many of these ads suggest the Democratic Party is part of a plot to assist the LGBTQ+ community in sexualizing children. Marjorie Taylor Greene, the Georgia congresswoman who lost her House committee assignments following her antisemitic and conspiratorial comments, has echoed this homophobic rhetoric in her campaign ads. In one ad that was available on both Facebook and Instagram from September 22-26, 2022, Greene warns her supporters that they must “STOP the Democrats’ radical sexualization and barbaric genital mutilation of kids” (a reference to gender affirmation surgery, which is only accessible to adults in the United States). The fearmongering video uses eerie and threatening music juxtaposed with clips of President Biden and others discussing how to support children who may be questioning their gender or sexual identity. The ad was viewed between 175,000 and 200,000 times by Meta users across the United States. 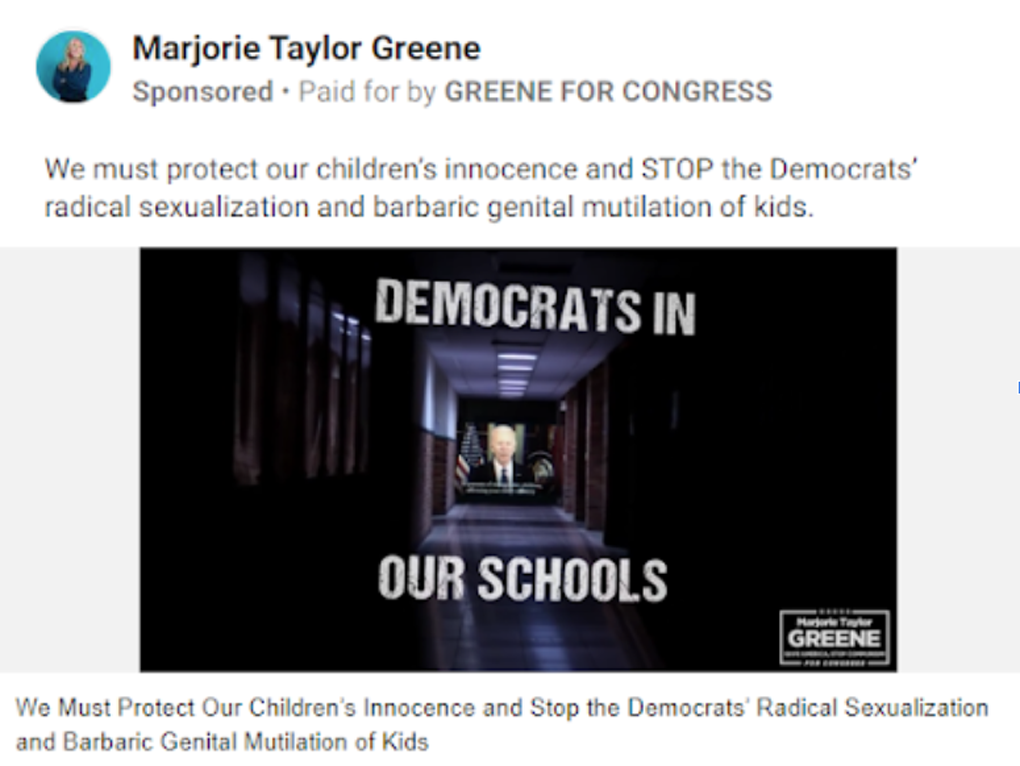 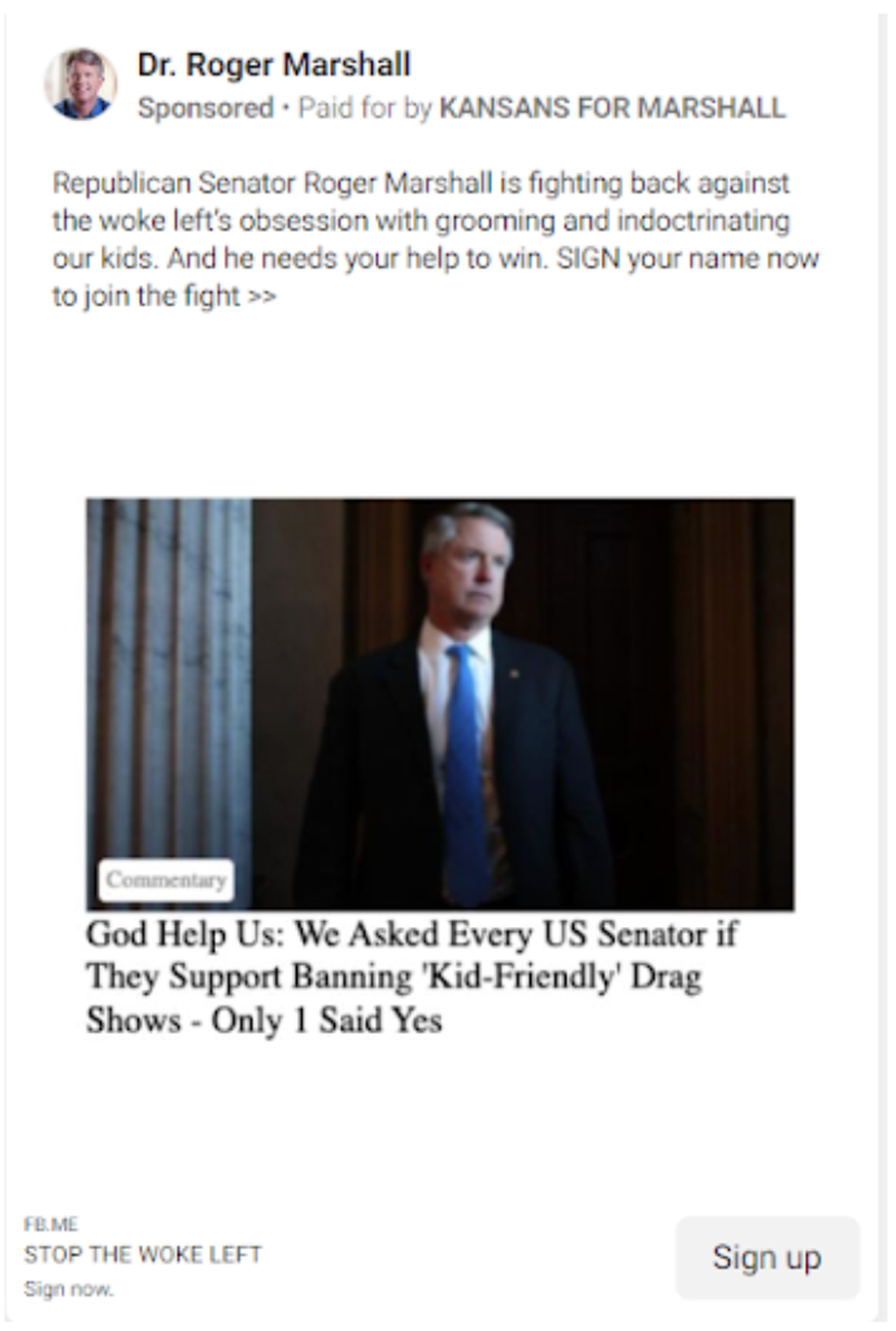 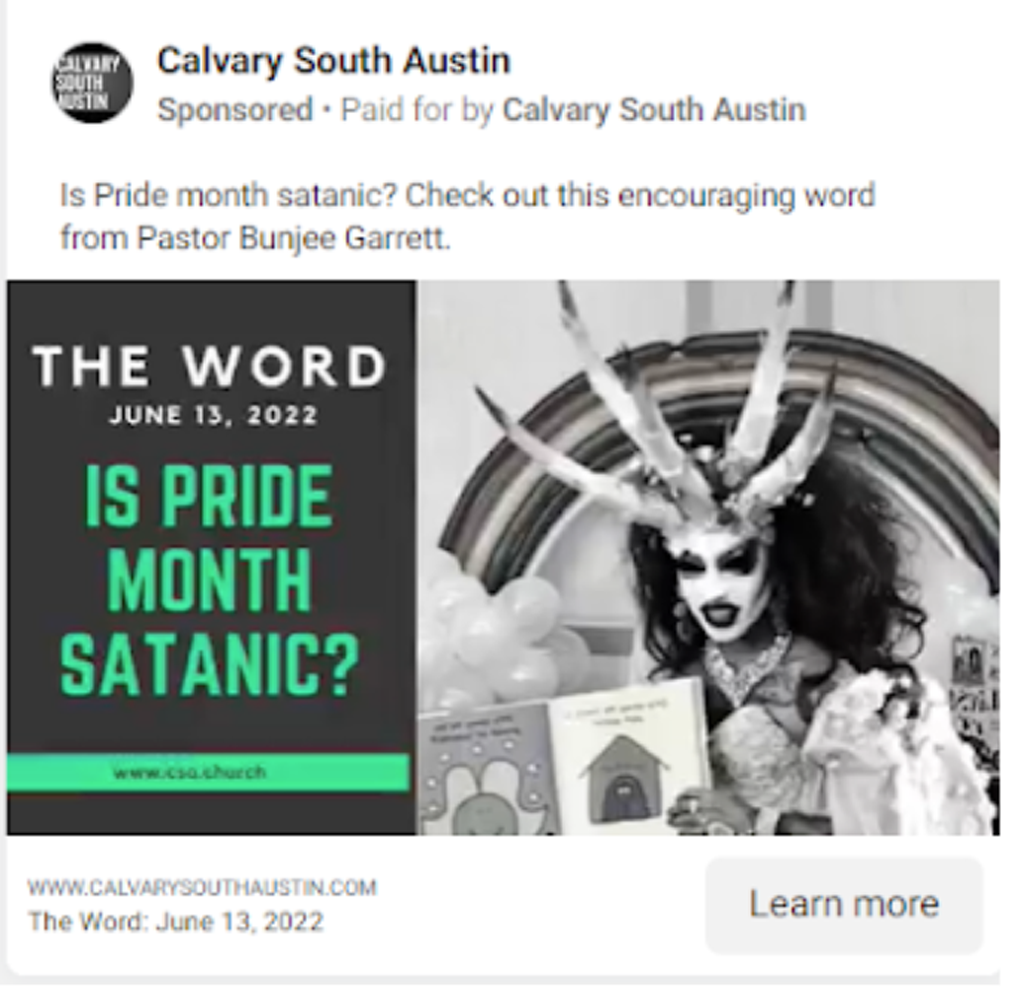 On October 12, a white supremacist shot and killed two people and injured another outside an LGBTQ+ bar in Bratislava, Slovakia. His manifesto echoed many hateful narratives about the LGBTQ+ community “grooming” children seen in Meta’s political advertisements. These hateful narratives have led to an uptick in threats and violence against the LGBTQ+ community. According to the Human Rights Campaign, nearly one in five hate crimes is motivated by anti-LGBTQ+ bias. Right-wing extremist groups have weaponized these accusations to appeal to mainstream conservatives and justify harassment and violence. Since March 2022, the Proud Boys have disrupted at least ten LGBTQ+ events. In June, the neo-Nazi group NatSoc Florida protested outside of a restaurant with signs that read: “Child groomers work here,” “Fags groom kids,” “Grooming in progress,” and “Judaism allows child rape.”

While it is a good step for transparency that Meta’s ad library provides data on ad spending, what is missing is more precise data to know how these ads were targeted to users. Who, exactly, sees these ads? Do these ads drive people who already hold extremist views further into rabbit holes?

Meta’s total revenue in 2021 was over $117 billion, nearly all of which came from advertising.

An estimated 2.9 billion people use at least one of Meta’s platforms daily, including Facebook and Instagram. Meta states, “we have a responsibility to promote the best of what people can do together by keeping people safe and preventing harm.” Yet Meta regularly fails its users by profiting from ads that promote antisemitism and homophobia. Meta is not only providing a platform that allows these hateful messages to reach thousands of users, the company is also giving these narratives a dangerous level of credibility with its audience.