A history of divisiveness

Malkin’s columns and books paint a picture of America under siege by enemies and outsiders. In 2002, she wrote her first book, Invasion: How America Still Welcomes Terrorists, Criminals, and Other Foreign Menaces to Our Shores, which painted immigrants as unwelcome enemies and criminals. In her 2004 book, In Defense of Internment: The Case for 'Racial Profiling' in World War II and the War on Terror, she defends both the internment of Japanese-Americans during World War II and racial profiling of Arab and Muslim Americans after 9/11.

Her latest book, Open Borders Inc.: Who's Funding America's Destruction?, released in September 2019, focuses on her claims that churches and various nonprofit organizations are contributing to what Malkin sees as unfettered immigration to the U.S., which she believes is destroying the country. In the book, she blamed some mainstream conservatives for embracing the status quo on immigration, and criticized other groups spanning the political spectrum for facilitating increasing immigration to the U.S.

When discussing the book during a Facebook live promotional event, Malkin appeared alongside Proud Boys founder Gavin McInnes.  When McInnes promulgated George Soros conspiracy theories, asserting the discredited claim that Soros, a child in Hungary at the time, was “not a Holocaust survivor” but rather a “Holocaust facilitator,” Malkin agreed with him.

One month later, in an October 1, 2019, column attacking ADL, Malkin dismissed the violent and deadly actions by white supremacists at the Unite the Right rally in Charlottesville, Virginia, in August 2017 by accusing “left” organizations of exploiting “the riots in Charlottesville, Virginia, as a means of demonizing all Trump supporters and nationalist activists while giving cover to antifa…”

In March 2020, Malkin’s column about a speech she gave at a groyper conference that month reflected her bigoted views. She wrote, “America will look like the cover of Ilhan Omar’s new book. It will look like the no-go zones of the Twin Cities. It will look like the serial predator-infested public schools in Montgomery County, Maryland. It will not look like this room. This is not conspiracy replacement theory. This is conspiracy truth.” By this point, Malkin was echoing many of the views promoted by white supremacists, joining the battle against what they call “Conservative, Inc.,” otherwise known as the mainstream conservative movement. 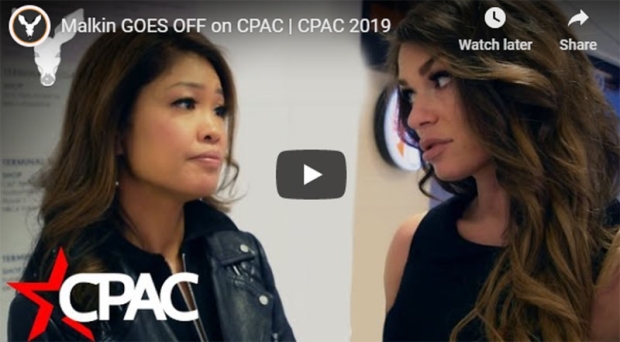 Breaking with mainstream conservatism, Malkin aligns herself with the groypers

At the 2019 Conservative Political Action Conference (CPAC), which describes itself as “the largest and most influential gathering of conservatives in the world,” Malkin gave a speech that was very critical of mainstream conservatism, saying, “It’s the GOP sellouts in bed with open borders—like the ones who hijacked the Tea Party movement to shill for amnesty—who are the real grifters cashing in and practicing deceit at the expense of their base.”

Malkin had for years expressed concern about demographic changes in the U.S. she attributed to the rise in immigration of people from undeveloped countries, but her unease appeared to grow at what she perceived to be a complacent response from the conservative establishment. She also argued that anti-establishment “dissidents” were being attacked verbally and assaulted at political events.

Through much of 2019, Malkin was regularly invited to speak at mainstream conservative events and also spoke on behalf of Young America’s Foundation (YAF), a conservative youth organization, as part of their speakers’ bureau. By November 2019, however, Malkin’s association with YAF would change drastically. Early in the month, Ben Shapiro, a conservative commentator, gave a speech at Stanford University on behalf of YAF, in which he argued that the alt right, including the groypers, were racist and trying to sabotage conservatives by heckling them in public.

The groypers, a loose network of alt right figures who are vocal supporters of white supremacist and “America First” podcaster Nick Fuentes, were in the midst of a campaign to disrupt speeches by mainstream conservatives like Shapiro and Charlie Kirk, the founder of Turning Point USA, a conservative  student organization. The groypers were showing up at events and asking questions designed to embarrass the speakers.

Shortly afterwards, Malkin gave a speech at UCLA titled, “America First: the Torch Is Being Passed,” in which she criticized Shapiro.  She praised Fuentes and the groypers as “patriotic conservatives.” She also called Fuentes one of the “New Right leaders.”

Malkin’s UCLA speech was praised by numerous white supremacists, including Fuentes, neo-Nazi Andrew Anglin and James Fulford, a writer for VDare. YAF, meanwhile, dismissed Malkin from the organization, tweeting, “There is no room in mainstream conservatism or at YAF for holocaust deniers, white nationalists, street brawlers, or racists.” In reply, Malkin tweeted, “The Keepers of the Gate have spoken.  My defense of unjustly prosecuted Proud Boys, patriotic young nationalists/groypers & demographic truth-tellers must not be tolerated…”

At the end of January 2020, Malkin announced on Twitter that she would be a speaker at the first America First Political Action Conference (AFPAC), sponsored by the founders of America First Students, which describes itself as a “campus conservative organization” but was created by groyper activists. The Washington, D.C. conference featured a number of white supremacists as speakers, including Fuentes, Patrick Casey, who heads American Identity Movement, and Scott Greer, who wrote, using a pseudonym, for the white supremacist journal Radix. 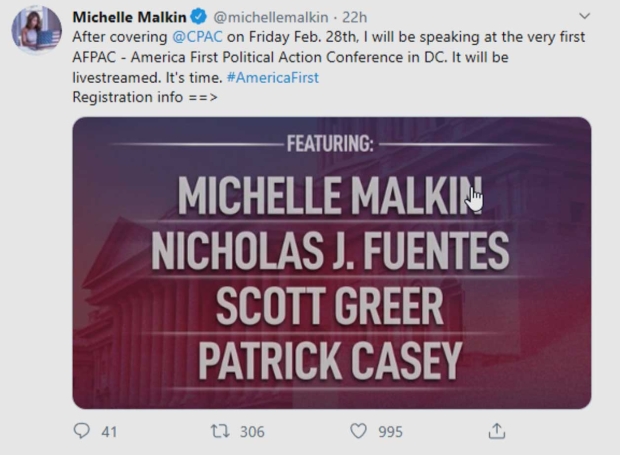 Michelle Malkin tweets on January 31, 2020, about her plans to speak at the America First Political Action Conference.

Malkin has positioned herself as a guiding, parental figure for America Firsters and groypers, who openly express racism, antisemitism and other forms of bigotry. Malkin herself made antisemitic remarks at the AFPAC event, wondering aloud why she wasn’t able to question the number of people killed during the Holocaust or talk about the “dual loyalty” of American Jews.

Malkin began her speech by remarking to the crowd, including Fuentes and Casey, “Thank you. Thank you. Mommy’s in the house.” She talked about her building anger, saying, “A fury had welled up inside me a year ago that had long been simmering.”  She mentioned the “betrayals of the GOP establishment when it comes to engineering and succumbing to demographic conquest.”

In a column about AFPAC afterwards, she referred to the groypers as “serious young men who never take themselves too seriously in their shared mission to end mass migration, restore law and order, and conserve and uphold actual conservative values” and she saluted “their sardonic humor and irreverence layered over their core America First message.” 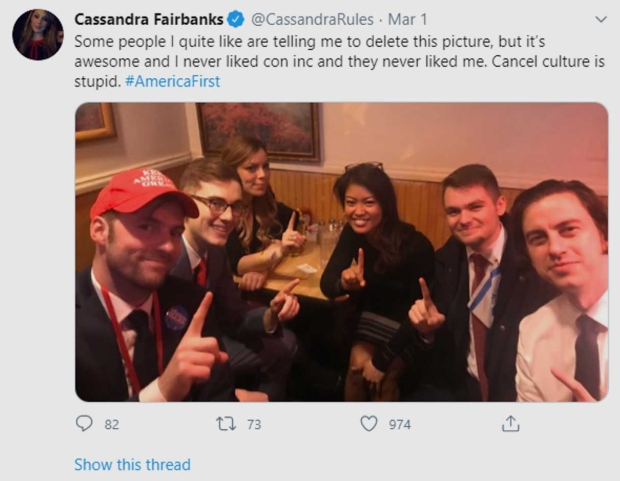 A number of days later, Malkin used her Telegram account to comment on various alt right and alt lite figures being banned by mainstream social media sites like Twitter, claiming she and others were experiencing “ruthless dehumanization.” The post was circulated on Telegram, including by a group associated with the neo-Nazi Nordic Resistance Movement (NRM). With a nod to the irony so popular within the alt right, Malkin signed her post “Love, NAZI MOM.” 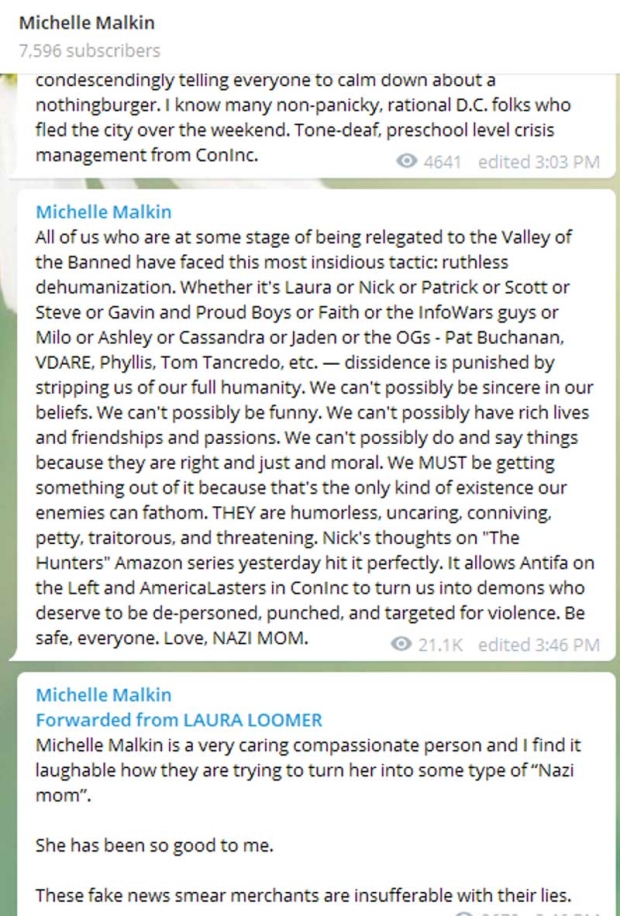 Malkin’s bigoted views have paved the way for ties with fringe figures like white supremacist Peter Brimelow, who operates the racist, anti-immigrant site, VDare (which runs her columns), Proud Boys founder McInnes and Laura Loomer, a right wing anti-Muslim bigot currently running for Congress in Florida (whose campaign Malkin supports).* In March 2019, Malkin was interviewed by Faith Goldy, a Canadian white supremacist who was reporting on the Conservative Political Action Conference (CPAC) for VDare. Malkin told Goldy, “Deplatforming dissenting voices is a ruthless, bizarre and unprogressive way to achieve ‘diversity and inclusion.’”

Since appearing at AFPAC, Malkin has continued to align herself with white supremacists and fringe figures to promote their views.  In May 2020, Right-Wing Watch reported that Malkin was collaborating with right wing provocateur Milo Yiannopoulos to create an “America First” reading list, recommending books for their supporters to read. The list includes a number of well-known antisemitic works, including The Protocols of the Learned Elders of Zion, The Culture of Critique by retired antisemitic professor Kevin MacDonald and The Jewish Revolutionary Spirit by antisemite E. Michael Jones.

In January 2020, American Renaissance, a white supremacist online publication run by Jared Taylor, began syndicating Malkin’s columns.  Malkin’s personal website now directs readers to the Unz Review, a site that features numerous white supremacists and antisemites and is run by Ron Unz, who has written a number of antisemitic tracts.

Malkin has clearly crossed a boundary in terms of her association with white supremacists. Nick Fuentes and the groypers present themselves as Christian conservatives and American nationalists while they attempt to normalize white supremacist views. Malkin justifies her embrace of those views by arguing that her “enemies” (the left, mainstream media, social media sites and now mainstream conservatives) are attacking “dissident voices,” including her own. 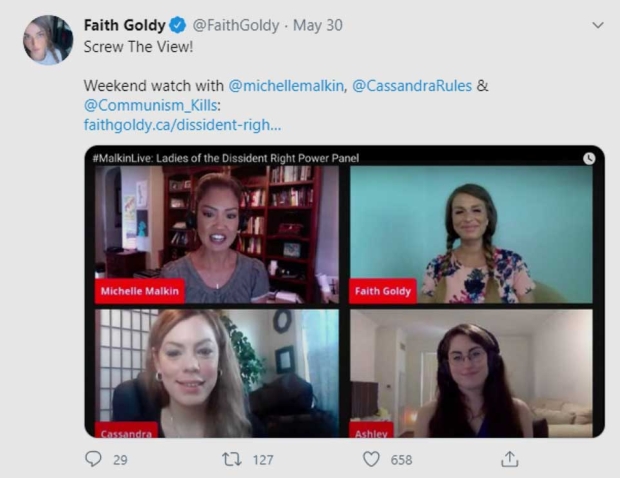 Michelle Malkin on a May 2020 livestream with Faith Goldy and others. (Posted 5-30-20 on Twitter)