Before November 8, many members of the militia movement, anticipating a “rigged” Trump defeat, had promised violence and revolution. “Oil em up, boys,” posted one anti-government extremist to Facebook, “the time grows near for revolution.  By ballot or bullet we will make America great again.” 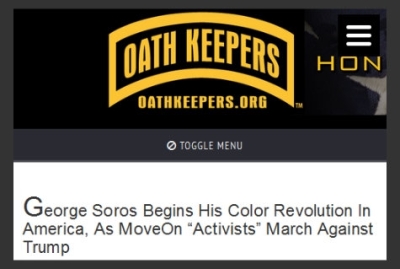 Save for those who supported Libertarian candidate Gary Johnson, the militia movement—including traditional militia groups as well as so-called Oath Keepers and Three Percenters—had strongly supported the populist, anti-establishment Trump candidacy.  And now, to their surprise, he had actually won.  No candidate favored by the militia movement had ever before even secured a major party nomination, much less actually won office.

So far, the reaction of the militia movement to Trump’s election has been a mixture of celebration, caution and—as is so typical of the movement—anger and conspiracy theories.  Much of the latter has focused on the anti-Trump protests that have erupted in cities across the United States following the election.

Certainly Trump’s victory has spurred excitement and optimism among many in the movement, though it is often an optimism tinged with caution.  “Is [Trump] the anti-globalist he claims to be?” asked “Shorty Dawkins” in an article about the election results posted to the website of the anti-government Oath Keepers.  “I sincerely hope so, but the proof is in the pudding.”  The movement, Dawkins added, had “won a battle, but not the war against globalism.  We cannot rest.”

Michael Graham, the head of The Three Percenter’s Club, one of the largest Three Percenter umbrella groups in the country, adopted a similar tone:  “Patriots, let's celebrate this victory but we must remain more vigilant than ever before, never letting our guard down. We must keep training and keep educating the masses and doing our best to wake them up.”

Such caution exists because, for the militia movement, the enemy is still out there and active.  “Media, guided by the globalists, still ignore the will of…We the People in favor of elitist desires,” posted one adherent, Chuck Bays, to a Facebook militia forum. “We came within an inch of literal physical revolution last night.”  Now the movement still had to work to “obliterate globalism.”

On a militia discussion forum, Mickie Johnson urged people to “pray daily that we can get our Country back and bring God back and that Trump will be watched over and protected and that the decisions he makes will be the right ones.”

Concern that Trump will make the “right decisions” is shared by others in the movement as well.  One adherent posted to a different militia forum that “Trump will be no friend to the militia movement…he’s already said he wants a waiting period for buying firearms.”  User “ghostof1776” wrote on the My Militia forum that “the other side is not going to go quietly, and frankly we need to make sure we all do our part to help keep the new President honest.”

If Trump’s election brought cautious optimism to the militia movement, the angry reaction to the election results by many on the left has made many militia adherents angrier still.  Some of the militia anger is even justified, such as their reaction to a number of on-line comments posted after the election that called for the killing of Donald Trump.

However, the militia movement has reacted particularly strongly to the large anti-Trump protests that have been organized in numerous cities around the country following the election.  “I don’t understand why they are protesting,” posted one Three Percenter to Facebook, apparently having already forgotten the hue and cry for revolution by many in the militia movement before the election. “He’s the president now. He won fair and square!  Deal with it!”

Some militia adherents have mocked or made little of the protesters.  One labeled them “a bunch of pissy little f___s going tantrum and causing hassles here and there, but it’s not the big bad hard core enemies with serious backing.” A Three Percenter described them on Facebook as “liberal millennial protesters,” characterizing them as spoiled and undisciplined and telling them to shut up and go to work.

Some of the mocking fantasized about going toe-to-toe with the protesters. “Bahahaha let’s do this,” wrote a Three Percenter to Facebook.  “30 million California guns and their owners vs. your loud mouthed anti-gun protests.”  The Three Percenter’s Club posted a meme to their own Facebook page showing a grinning actor Jon Hamm as his Don Draper character, with the phrase, “When you see posts by anti-gun liberals screaming for a revolution.”  One Three Percenter characterized the protesters as “the soft, fleshy, and full of feeling ones who would prob[ably] start crying if they even saw a gun.”

However, the mocking of some in the movement turned to darker and more ominous tones. “This is not going to be pitchforks and torches,” wrote one Three Percenter on Facebook. “We are going to have to go 1776 on their asses. You don’t threaten the president elect with death.”

Another described the “socialist pigs” marching in Chicago and New York and proclaimed, “Have no doubts whatsoever people we are at war!”  If people stopped talking and started shooting protesters, wrote another Three Percenter, the “bullshit” would stop:  “If not, continue shooting until it does.”

Racial stereotypes and even anti-Semitism also quickly appeared in militia reactions to the protests.  The militia movement is not a white supremacist movement, but its ranks do contain people with bigoted views and the protests have brought some of those views to the fore, as these militia and Three Percenter Facebook comments illustrate:

Given the heavily conspiracy-oriented nature of the militia movement, it is no surprise that a number of militia adherents have turned the anti-Trump protests into a larger conspiracy, speculating that the protests were organized in order to justify the declaration of martial law, one of the movement’s key conspiracy theories.

“National emergency, mass rioting, sounds like a perfect excuse for martial law,” wrote Shawn Perkins to a Three Percenter discussion group.  “Damn!!!” responded Cindy Kratzer.  “You think like me.  You can bet your ass Ovomit is behind this.  He isn’t going to leave peacefully.”

Others also thought Obama was behind the protests.  “I still smell Martial Law coming,” wrote Denise Eshelman.  “Obama is way too cool for such a huge loss.”  It is organized, declared Chris Bergen.  “Obama was a community organizer. This just doesn’t happen randomly in seven different cities.  This was the contingency plan if they didn’t win.”

Some speculated that this was why Hillary Clinton conceded the election “so easily,” while others pointed to liberal businessman George Soros, frequently painted as a villain in right-wing conspiracy theories, as being behind some sort of plot (presumably because an activist organization he once funded, MoveOn.org, has played a role in organizing many of the protests).

The movement originally convinced that an election-rigging conspiracy would deprive Trump of office seems already to be moving on to their next conspiracy theories.