In early March, federal prosecutors in Las Vegas announced charges against 14 anti-government extremists from a variety of states in connection with a 2014 armed standoff between the federal government and supporters of Nevada rancher Cliven Bundy at Bundy’s ranch.  Prosecutors added additional defendants later in the month.  As of March 22, 19 people have been indicted for that confrontation, including Bundy himself and four of his sons.

Many of those indicted on charges related to the Bundy Ranch standoff, or present at that standoff but not indicted, have also separately been indicted in connection with the more recent armed standoff at the Malheur National Wildlife Refuge near Burns, Oregon, in January-February 2016. This includes alleged ringleader Ammon Bundy and his brother Ryan, both sons of Cliven Bundy.  As of March 22, 26 people have been indicted on various charges related to the Malheur standoff.

Almost all of the organizers and many of the participants of the 2016 standoff in Oregon had taken part in the earlier standoff in Nevada.

The below chart shows the 38 people indicted so far in the two armed confrontations. More indictments may be forthcoming. 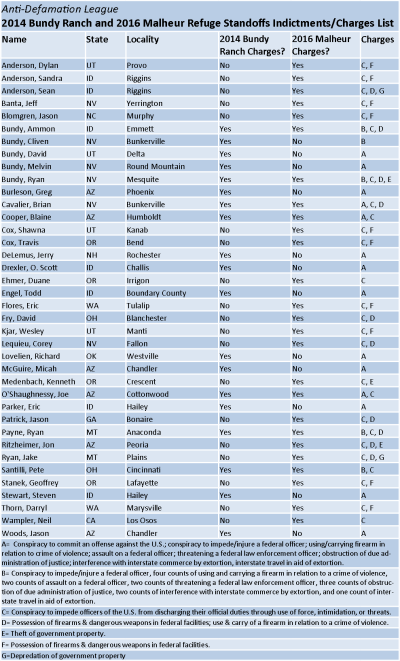