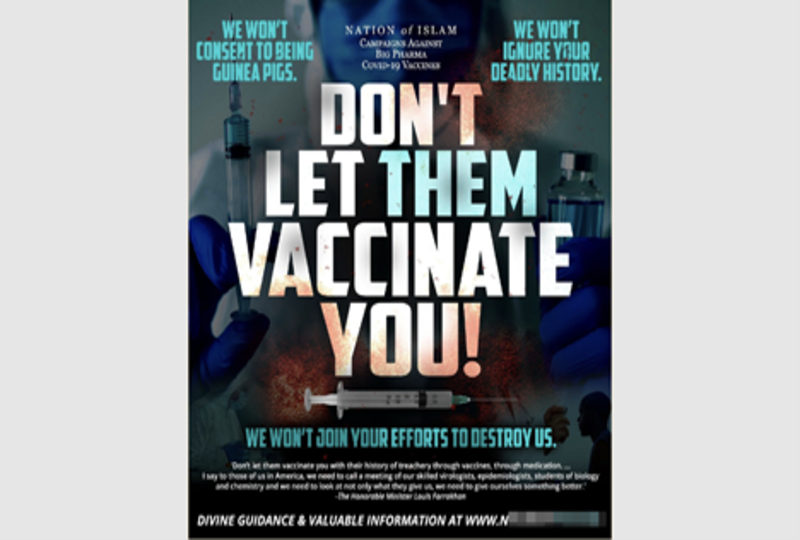 A graphic shared on social media by the Nation of Islam warning against the COVID-19 vaccine (source: Twitter)

Months before the first COVID-19 vaccine began to be distributed in the United States, the Nation of Islam (NOI) had already widely disseminated its directive that Black people refuse the vaccine. Over a year later, the NOI and its leading members have continued their unrelenting promotion of anti-vaccine messages in social media posts, print materials, sermons and beyond. More recently, anti-vaccine advocacy has led NOI members to collaborate with and be promoted by various individuals and groups outside of the NOI, including conspiracy theorists and QAnon proponents.

Despite sometimes holding significantly different views about other aspects of the pandemic or their ideologies more broadly, a shared commitment to protesting the vaccine, as well as a distrust of the government and mainstream media, has facilitated these joint efforts. Through all of this, the NOI has exploited legitimate concerns and distrust about the history of medical experimentation on marginalized communities in the United States in order to promote conspiratorial claims about a government-sponsored depopulation plot that targets Black people.

Advocating against vaccines is a familiar strategy for the NOI. In the 1960s, NOI leader Elijah Muhammad instructed his followers to reject the polio vaccine. In the mid-2010s, the NOI revived its anti-vaccine advocacy under leader Louis Farrakhan with a focus on the disproven allegation that vaccines are linked to autism in children. Early in the coronavirus pandemic, NOI leaders and members again began to revisit the topic of vaccines, including promoting conspiratorial claims that the COVID-19 vaccine was part of an agenda to kill Black people.

On July 4, 2020, Farrakhan delivered a highly-publicized speech in which he instructed Black people in the U.S. and around the world: “Don’t take the vaccines…Don’t let them vaccinate you, with their history of treachery through vaccines, through medication.” He claimed that the vaccines were part of a depopulation plot sponsored by the U.S. government, Dr. Anthony Fauci, and Bill and Melinda Gates, among others. “We will not accept your vaccine,” Farrakhan continued, “because we’re not accepting death.” Farrakhan further claimed that any attempt to force Black people to take the vaccine would be considered “a declaration of war.” Within days, the speech had received over one million views online.

In subsequent weeks and months, quotations from the speech were repurposed as hashtags and slogans plastered on the NOI’s website, social media accounts, and other online and print materials, including in the group’s weekly newspaper, The Final Call. Specialized brochures urging readers to heed Farrakhan’s warnings about the vaccine were distributed alongside The Final Call. Before its Twitter account was suspended in 2021 for violating the platform’s policies, the Nation of Islam Research Group, known for producing some of the NOI’s most virulently antisemitic content, posted numerous graphics warning against the vaccine, which were further shared on other NOI-affiliated accounts and platforms.

NOI members at all levels of the organization have since propagated the anti-vaccine messages. Ishmael Muhammad, the NOI’s Student National Assistant Minister, has frequently reiterated Farrakhan’s instructions during the NOI’s nationally-broadcast weekly sermons. “The Minister has made it clear to us that we’re not taking their vaccine. It’s not up for debate. It’s a divine order from God,” he stated in January 2021. During another weekly sermon later that same month, NOI Executive Council member and Student Minister Wesley Muhammad blamed Jews for the pandemic and warned against trusting the “vaccine mafia.” 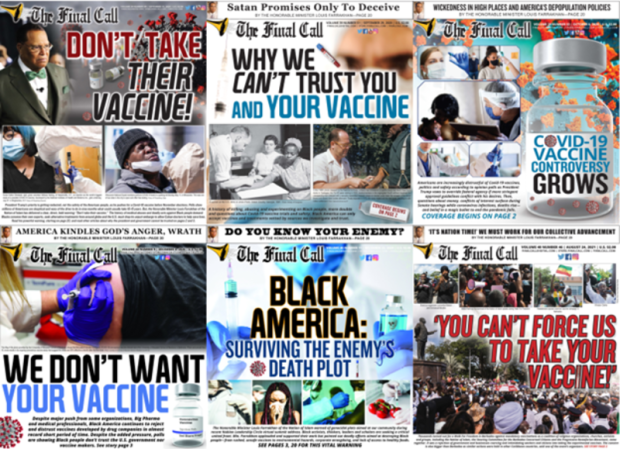 Examples of The Final Call newspaper’s front pages in 2020 and 2021, demonstrating the NOI’s messaging on the COVID-19 vaccine. (source: The Final Call)

In addition to tactics which utilize the NOI’s own publications and social media channels, the NOI has also spread its anti-vaccine propaganda through collaborations with or promotion from a wide range of individuals and groups over the past year. Some of these individuals and groups have a more mainstream following while others pander to a more extreme audience. These collaborative activities though have provided a platform for NOI members to grow their audiences and serve to seemingly legitimize NOI’s false and misleading claims.

In December 2020, Farrakhan addressed the National Black Leadership Summit, which was hosted virtually by the Nubian Leadership Circle, a group that promotes Black unity worldwide. Farrakhan reiterated his claims about the supposed government-sponsored “death plan” targeting Black people and described the COVID-19 vaccines as “free shots of toxic waste.”

NOI chapters have also joined anti-vaccine coalitions at the local level. For example, NOI Student Minister Henry Muhammad and other members of the NOI’s Muhammad Mosque No. 7C in Brooklyn, NY participated in an October 2021 rally with community activists outside the Barclays Center, home to the NBA’s Brooklyn Nets, to support Nets player Kyrie Irving and his decision to not receive the COVID-19 vaccine. Abroad, local NOI members in Barbados joined with other religious groups and activists to form the Barbados Concerned Citizens Against Mandated and Coerced Vaccination coalition which organized an August 2021 protest against a potential vaccine mandate.

Rizza Islam, an NOI member and social media influencer who has promoted antisemitic and anti-LGBTQ+ content, is a prominent anti-vaccine advocate with a history of collaborating with other anti-vaxxers and conspiracy theorists. His conspiratorial claims about the government’s use of vaccines as a means of population control stretch back years, though the coronavirus pandemic has helped him build his current following. By early 2021, he had amassed over half a million followers across various social media platforms and was listed among the dozen most influential online anti-vaxxers in a report published by the Center for Countering Digital Hate, a non-profit organization which analyzes online misinformation. He continues to circumvent repeated social media bans, despite platform policies which prohibit sharing vaccine-related misinformation.

During the pandemic, Rizza Islam received mainstream exposure and support, enabling him to both directly further his anti-vaccine messages and establish himself as a leading representative of the NOI. In March 2021, he appeared on ABC’s primetime show, “Soul of a Nation,” to provide perspective on the Black Muslim experience. While vaccines were not the focus of the segment, Rizza Islam’s signature anti-vaccine bowtie and pocket square—adorned with an image of a syringe covered by a red circle with a slash through it—were both visible in promotional materials for the episode (the symbols were blurred when the full segment aired).

Rizza Islam was also featured on multiple occasions on the cable program “Black News Tonight,” hosted by Marc Lamont Hill on BNC, including a September 2021 appearance to debate the efficacy of the COVID-19 vaccine with a pro-vaccine physician. BNC is available to more than 50 million homes across the country and video of the segment, in which Rizza Islam repeated misinformation about vaccines allegedly being unsafe and ineffective, has received hundreds of thousands of views online since the episode aired. 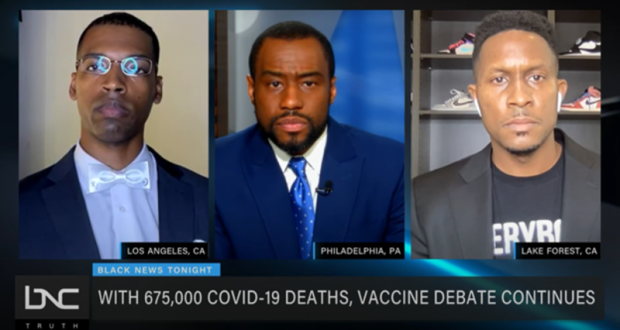 Celebrities have also contributed to the spread of the NOI’s anti-vaccine content. Rap artist Jay Electronica has reposted content from NOI leaders and shared links to articles published by The Final Call about why Black people should not trust the COVID-19 vaccine, reaching hundreds of thousands of followers. Former NBA players Stephen Jackson and Kwame Brown, rapper T.I., and music producer Pete Rock have met with Rizza Islam during his anti-vaccine tour or supported his content online. After one of Rizza Islam’s social media accounts was terminated for violating misinformation policies in June 2021, Jackson posted a video in his defense, stating “y’all owe my boy an apology…He’d been telling y’all Fauci was lying. He’d been exposing all the bullshit about the vaccine…My brother Rizza Islam been bringing all this dumb shit to the light.”

Local elected officials and politicians are among those who have helped spread the NOI’s anti-vaccine misinformation. Marcus Muhammad, a longtime NOI member and the current second-term mayor of Benton Harbor, MI, regularly posts anti-vaccine content on his social media, including reposts directly from NOI-affiliated channels. In Connecticut, a Norwalk city council member organized and co-hosted an event for Rizza Islam’s anti-vaccine speaking tour in October 2021. A city council member in South Fulton, GA has hosted events with Rizza Islam multiple times in 2021, including a community event which was promoted by the city’s official social media accounts and advertised as providing “researched information about what the Black community needs to know about the pandemic.” During one of his visits to South Fulton, Rizza Islam was also honored with a proclamation from the city which praised him for “fostering community edification on the issue of vaccinations within the Black community.”

At the NOI’s annual Saviours’ Day event in February 2021, which was held in Chicago and livestreamed online, anti-vaccine messages took a leading role and extremists from other organizations helped promote this message. For instance, longtime anti-vaccine advocate Robert F. Kennedy Jr., who leads the Children’s Health Defense organization, and QAnon proponent Dr. Judy Mikovits, who gained fame for her role in the viral Plandemic videos in 2020, were both featured during a plenary session on the coronavirus pandemic. 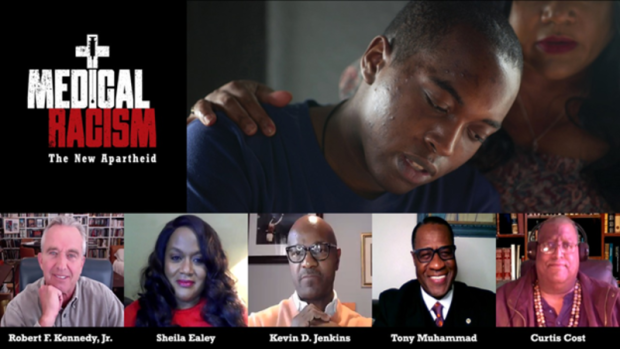 Other NOI members have also regularly collaborated with Jenkins, who runs the Urban Global Health Alliance, on anti-vaccine efforts. Rizza Islam and local NOI members joined Jenkins for a protest outside the CDC headquarters in March 2021. Rizza Islam, Atlanta-based NOI member King Cam, and local NOI Student Ministers are among those who have served as featured speakers at anti-vaccine events co-hosted by Jenkins and Angela Stanton-King, a QAnon proponent and anti-LGBTQ+ bigot.

Prominent anti-vaccine conspiracy theorist Dr. Simone Gold and QAnon proponent Dr. Carrie Madej have also been featured alongside NOI members at some of these events. Rizza Islam previously spoke at a December 2020 event sponsored by America’s Frontline Doctors, the discredited medical group led by Gold. Both The Final Call newspaper and the NOI Research Group have provided links to the America’s Frontline Doctors website in articles about the coronavirus pandemic and vaccines.

In a display of one of the most unexpected alliances forged by anti-vaccine advocacy during the pandemic, Rizza Islam appeared as a guest on InfoWars in August 2021 with host Alex Jones, a notorious right-wing conspiracy theorist who has drawn admiration from white supremacists. During the interview, Jones praised Rizza Islam and the NOI for their opposition to the vaccines. Rizza Islam reciprocated Jones’ praise and adjusted his messaging to appeal to Jones’ audience, expanding his typical focus on the racial component of the supposed depopulation agenda to a broader warning about the threat that the government’s actions pose to all people.

“This [government] is done for,” Rizza Islam told Jones, “this one under Satan, this one under evil and wickedness and pedophilia and rape and all of that, that is over…In the Black community, we’ve always known it to be the system of white supremacy…As we know now, it’s more than just that. It is a globalist system. It is pure evil.” Rizza Islam returned to InfoWars in October 2021 for another segment about the COVID-19 vaccine. 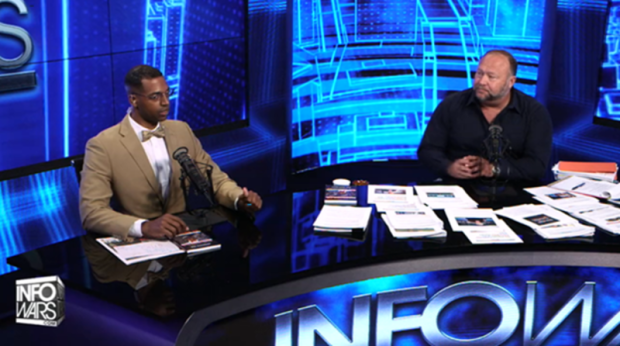