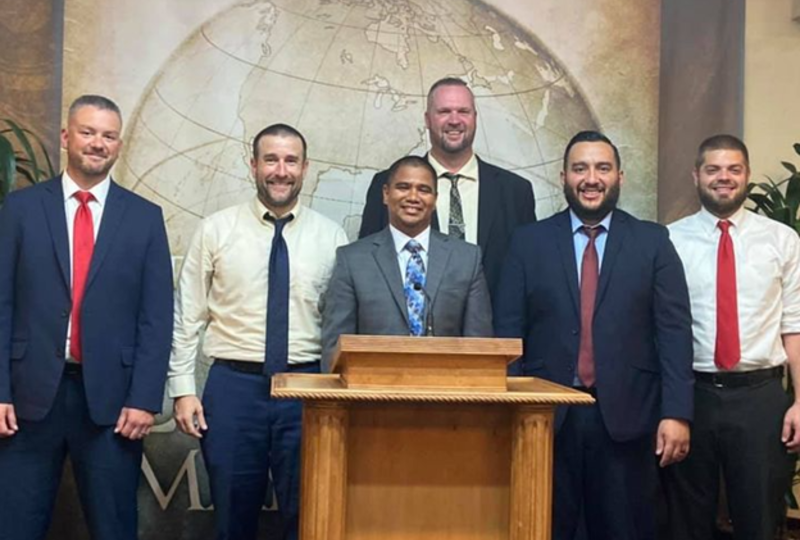 Pastors from five other New IFB churches joined Jimenez to deliver a series of sermons throughout the weekend, including Steven Anderson, the pastor of Faithful Word Baptist Church in Tempe, AZ. Anderson, who founded the first New IFB church in 2005 and continues to be the movement’s most high-profile pastor, delivered a sermon titled “Transvestites,” an outdated term that has fallen out of use and is widely considered offensive. In the sermon, he repeatedly used degrading anti-LGBTQ+ language and promoted offensive tropes about transgender people.

Anderson noted that he intentionally chose the word “transvestite” instead of “transgender” because “there’s no such thing as transgender…I'm not gonna use the words that the media and all these wicked, evil people are trying to get me to use to change the way that I think.” He also repeated one of the New IFB’s most frequent claims about the LGBTQ+ community, stating that “they’re not reproducers, they’re recruiters. And they recruit children by molesting them…Homos are pedophiles…Pedophilia has always been part and parcel of the homo lifestyle.”

Anderson also openly called for members of the LGBTQ+ community to be killed. “If we had a righteous government,” he proclaimed, “they would round them all up and put them to death...Just by walking their faggot selves down the street, they’re hurting my children. You say, ‘well can’t they just exist?’ No! They can’t even exist! That’s why the Bible says, ‘they shall surely be put to death.’ That’s what needs to happen.”

Jimenez delivered the weekend’s penultimate sermon, speaking on the topic of the so-called “cancel culture” and the way in which he sees it impacting the New IFB through social media bans. New IFB churches rely heavily on social media platforms, particularly YouTube, to spread their doctrine, though they have frequently been deplatformed by these companies for hate speech policy violations.

“The cancel culture works hard to shut down Bible-believing Christians and Bible-believing preaching because they don't want to hear it,” Jimenez claimed, blaming Jewish people for leading these efforts both historically and in the present. “The Jews control the media. No new thing under the sun. The same Jews that were fighting Paul in the Book of Acts are the same Jews that are fighting us today,” he said, referring to those who control YouTube as “JewTubes.”

Jimenez urged his fellow pastors and congregants to continue to spread their views and defy these deplatforming efforts, though he did acknowledge that he’s getting “tired” of constantly having to create new YouTube accounts to circumvent bans. “The problem is that when YouTube deletes our videos, then most of the time those videos — and of course those are the most popular, most controversial videos — they usually end up on alternative video hosting sites where they get very little traffic,” he lamented. “I don’t know what the solution is.”