New anti-Semitic trolling efforts have emerged on several online platforms in recent weeks, with users weaponizing lists of Jews by variously posting their images, personal information such as names, places of employment, and schools they attend, as well as links to the targets’ social media accounts.

Lists of Jews in any form on white supremacist platforms is alarming, especially given the ongoing threats of anti-Semitic violence and targeting of synagogues and Jewish organizations. While none of these trolling tactics explicitly calls for violence against Jews, it is impossible to know who might interpret the lists and photographs as a call to action.

Since its launch in the early 2000s by longtime white supremacist Alex Linder of Kirksville, Missouri, Vanguard News Network (VNN) has become a popular forum for particularly vitriolic white supremacists and anti-Semites. It was on VNN’s forum where white supremacist and convicted murderer Frazier Glenn Miller found  a comfortable spot to post vile, anti-Semitic, racist posts more than 12,000 times in the ten years he was forum poster.

In June 2018, a VNN forum thread, “Jew journalist says her ‘jewish face’ makes her feel ugly,” linked to an article by a Jewish writer who was considering surgery to make her nose smaller. The thread quickly became a place for users to post publicly-available photos of (presumably) Jewish people in order to mock their appearances. The photos, which are primarily of women and girls, were usually lifted directly from websites of Jewish organizations, schools and synagogues. The thread, which was recently removed from public view, contains more than 400 individual posts. There is no call for violence against the people whose photos are posted; the thread appears to be an attempt to highlight what many anti-Semites and white supremacists consider stereotypical Jewish physical attributes.

However, several posts in the thread do reference generalized violence. One poster wrote, “I sniff the wind and smell pogrom, that blessed day where you fall as all the arrogant always do is finally at hand and we are patiently waiting to destroy you all.” Another poster suggested sulfuric acid as the “solution” for the Jewish journalist who was worried about her appearance.

The thread was continuously updated until it was removed in late August.

4chan is a popular Internet discussion forum (of a type known as an “imageboard”) infamous for its trolling attempts—as well as for the studied offensiveness of many of its members and its association with the white supremacist alt right movement.

This past August, an anonymous poster launched a campaign on 4chan encouraging others to create fake Twitter and Facebook profiles impersonating Jews. The goal was apparently to sow discord and confusion in the Jewish community. The fake accounts, which include photos (of actual Facebook and Twitter users) and names that sound stereotypically Jewish, tweet and post anti-Semitic and anti-Israel content, highlighting political divides in the American Jewish community. Some of the accounts also claim to be affiliated with Jewish Voice for Peace. The call for a “massive movement of fake Jewish profiles” appears to have resulted in a few dozen such profiles, many of which have since been deleted by the platforms. 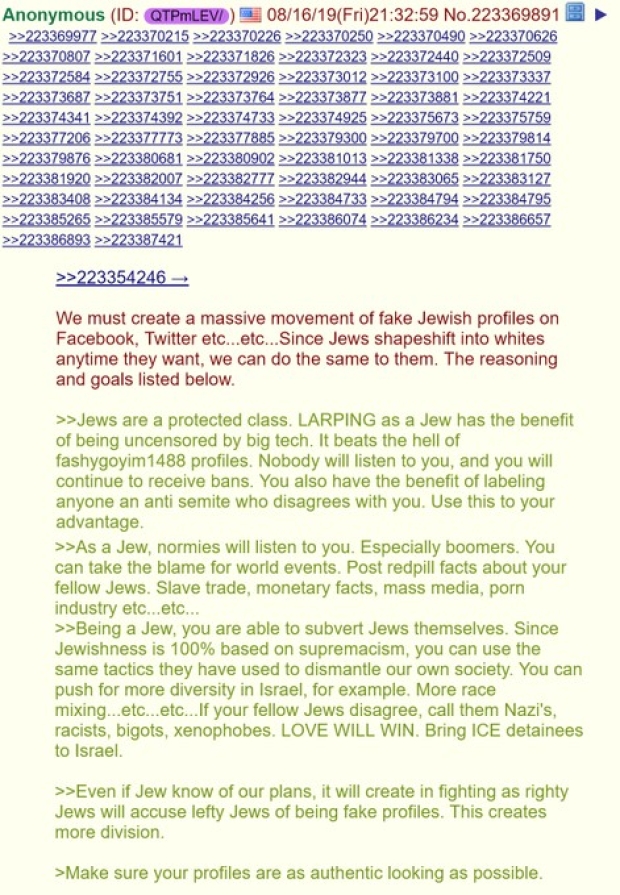 Many of those who have had their images and information posted online have expressed concern that they are being harassed or may even be worried about their personal safety.

In July, another anonymous 4chan poster put out a call to collect tweets by a group of progressive Jews who have been vocal about racism or who have addressed messages about racial issues to “fellow white people,” discussed themes of “white privilege” and/or self-identified as Jewish. 4chan posters were asked to post specific tweets by these individuals, as well as their photos, to a 4chan thread.  Many of the responses to these tweets were threatening and violent, including, “This is why all j*ws must DIE. 100% kike genocide NOW!” Another poster wrote, “I really think we should kill all of these jews [sic]. who's with me?”

4chan deleted both of these threads, but almost immediately, a nearly identical list launched on Telegram, an online social networking platform popular with a wide range of extremists. The channel with the list is called “The Noticer / The European Man” and includes a description calling the channel “a celebration of God’s chosen people. The Shapeshifting, The Subversion, the anti-white hatred, it’s all here folks. Please enjoy the red pills responsibly.”  The use of the phrase “red pill” is a common term on white supremacist and other extremist sites referring to being opened to the truth of whatever extreme movement is using the term.

From 4Chan, Another Trolling Campaign Emerges