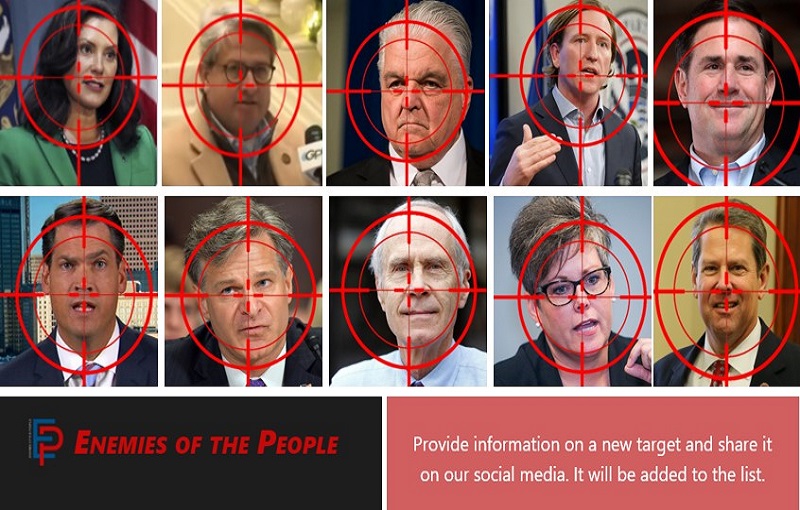 Above: Screenshots of public officials targeted on the Enemies of the People website

In the weeks since the 2020 presidential election, public officials and election workers nationwide have come under attack. Targets include officials who have verified and stood by their state’s election results and those who have implemented new pandemic-related restrictions. These officials have received death threats, as well as visits to their private residences and harassment online and by phone. We have seen extremist and mainstream voices alike calling for violence, making baseless claims about election fraud and spreading pandemic conspiracies and escalating the potential for violent action.

A summer of protests and anger over the first round of pandemic-related restrictions and the rise of QAnon conspiracies served as a prelude to the current wave of animosity directed at elected officials. The country is witnessing the widespread proliferation and acceptance of two conspiratorial information streams: the election is being stolen from Donald Trump, and elites are using the coronavirus pandemic to enslave humanity and destroy America.

In early December, a website called “Enemies of the People” listed public officials and employees of Dominion Voting Systems who, according to the site, “have aided and abetted the fraudulent election against Trump.” The website includes images of the individuals superimposed with crosshairs (as if seen through a firearm’s scope), their alleged infraction(s) against Trump and in many cases their personal email and home addresses. The site urges visitors to provide information on any “new target and share it on our social media.”

Examples of recent harassment of public officials include:

These threats appear to be the byproduct, at least in part, of the inflammatory rhetoric espoused by a wide array of Trump supporters. Some of this speech has openly called for violence. Examples include:

As we have seen, extremist and mainstream voices are both calling for violence, increasing the potential for dangerous activity.  These plots illustrate that threat: