One Year After the Tree of Life Attack, American Jews Face Significant Threats 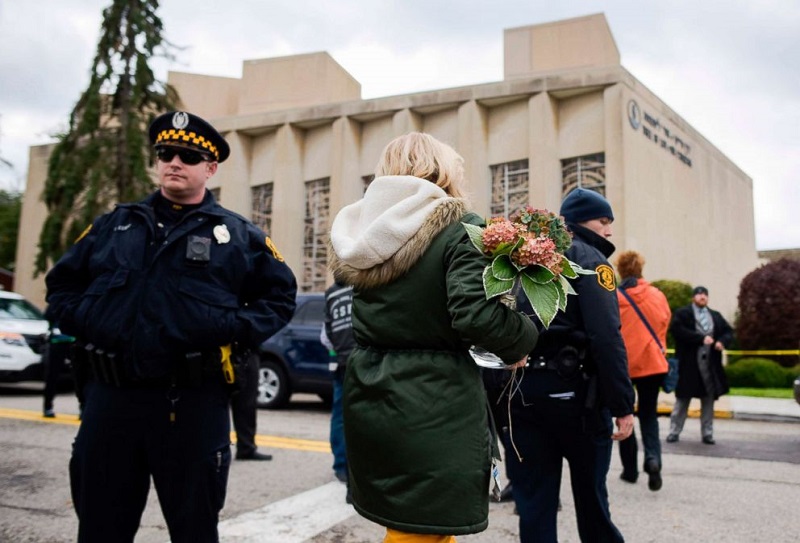 White supremacists continue to pose a serious threat to Jews in the United States – as they do to African Americans, Muslim Americans, Latinx Americans, immigrants, LGBTQ Americans and other communities.

In the year since the deadly rampage at Pittsburgh’s Tree of Life synagogue, at least 12 white supremacists have been arrested for their alleged roles in terrorist plots, attacks or threats against the Jewish community specifically.

Many of the offenders were inspired by previous white supremacist attacks; on the six-month anniversary of the Tree of Life attack, a gunman opened fire at a synagogue in Poway, California, leaving one worshipper dead and others injured. In addition to the 12 white supremacist incidents, there were two additional incidents targeting Jews (see list below), which were attributed to people inspired by an extremist interpretation of Islam, one of whom referred to Tree of Life shooter Robert Bowers as his inspiration. Many of the arrested individuals cite – and apparently seek to mimic -- previous anti-Semitic murderers.

Since October 27, 2018, white supremacists have targeted Jewish institutions’ property on at least 50 occasions. From the Poway synagogue attack to a religious service interrupted by shouts of “Heil Hitler,” white supremacists have presented very real threats to Jews across the country. This includes 12 instances of vandalism using white supremacist symbols and 35 distributions of white supremacist propaganda, according to ADL Center on Extremism research. Four days after the Tree of Life attack, a synagogue in California was defaced with obscene anti-Semitic slurs. In November 2018, a New York synagogue was vandalized with the phrase “Jews Better Be Ready,” and references to Hitler.

There have been at least 30 additional incidents in which individuals (of unknown ideology) committed arson, vandalism or distributed propaganda against Jewish institutions that was anti-Semitic or generally hateful, but not explicitly white supremacist in nature. These incidents include the shooting of an elderly man outside a synagogue in Miami, fires set at multiple Jewish institutions in New York and Massachusetts, Molotov cocktails thrown at synagogue windows in Chicago, damaged menorahs in Georgia and New Jersey, as well as a wide range of anti-Semitic graffiti.

In the year since the Tree of Life attack, there have been 15 plots, attacks or terrorist threats against Jews by extremists of all types.

The threats in these cases were not idle, and the risks were exacerbated by aggravating circumstances, including criminal histories and/or the possession of weapons or bomb making materials by the prospective attackers. In each case, explicit threats were made against members of the Jewish community, and in most cases, the would-be terrorists cited previous white supremacist murders as inspiration. In at least three of these cases, ADL’s Center on Extremism provided critical intelligence to law enforcement, leading directly to investigations and arrests.

Miami, Florida, October 2018: Larry Greene (aka Elijah Israel), a self-identified black Israelite, was charged with two counts of aggravated assault with a deadly weapon after allegedly assaulting two people as they were leaving a prayer service at a local synagogue. According to the arrest affidavit, Green threated to kill the victims with a knife, called them “fake Jews” and told them to “go back to Israel.” This case is being treated as a hate crime. Anti-Semitic off-shoots of the Black Hebrew Israelite movement assert that white people are agents of Satan, Jews are liars and false worshipers of God, and blacks are the true “chosen people.”

Monroe, Washington, December 2018: Authorities arrested white supremacist Dakota Reed, after the ADL supplied law enforcement with his social media posts about killing Jews in a synagogue and children in school. Reed also mentioned “pulling a Dylann Roof,” a reference to the white supremacist who murdered nine African American people in a Charleston, South Carolina church. In May 2019, Reed pleaded guilty to making threats to bomb or injure property and was sentenced to one year in prison.

Toledo, Ohio, December 2018: Islamist extremist Daniel Joseph was arrested by the FBI after he unwittingly worked with an undercover agent to plan an attack on a synagogue. Joseph was active online, posting photos and messages in support of ISIS. He also made multiple homemade propaganda videos, which he sent to the undercover agent. Joseph cited Tree of Life assailant Robert Bowers as a source of inspiration.

Cary, North Carolina, November 2018: William Josephus Warden was arrested after he came to the door of Congregation Sha’arei Shalom and threated to damage the property. Prior to this incident, Warden allegedly erected and burned a cross in Bond Park and distributed anti-Semitic “Aryan Youth” propaganda around the Weatherstone subdivision.

Lehighton, Pennsylvania, April 2019: ADL helped to identify white supremacist Corbin Kauffman, who used aliases to post hundreds of racist, anti-Semitic and Islamophobic messages, images and videos, several of which contained threats. According to prosecutors, Kauffman “expressed a desire to commit genocide and ‘hate crimes,’ and called for or depicted images of the killing of Jewish people, black people and Muslim people.”  Kauffman also allegedly spray-painted anti-Semitic graffiti at a park, plastered a display case at Chabad Jewish Center in Ocean City, Maryland with white supremacist and anti-Semitic stickers, and posted photos of his vandalism. He was charged with interstate transmission of threats, a federal crime that carries a maximum of five years in prison.

Dormont, Pennsylvania, April 2019: White supremacist Hardy Lloyd posted online threats against Jews and gun-ban advocates. One of the posts referenced Squirrel Hill, the Pittsburgh neighborhood that is home to the Tree of Life synagogue. The posts violated his supervised release agreement which prohibited him from accessing social media or communicating with anyone to promote terrorism. In August 2019, Lloyd was sentenced to two years in federal prison.

Kent, Washington, May 2019: Federal authorities arrested Chase Bliss Colasurdo of Kent, Washington, and charged him with making violent threats against President Trump’s family and various media figures, as well as ongoing bomb threats to synagogues. Colasurdo’s alleged posts included images promoting anti-Semitic conspiracy theories and advocating for the murder of Jews, including Rabbi Yisroel Goldstein, who survived the April 2019 shooting attack at the Chabad Congregation in Poway, California. He allegedly wrote, “Earnest is a true Hero!”

New York, New York, May 2019: White supremacist Garrett Kelsey of Iowa was arrested for a May 2019 telephone call to a New York-based Jewish organization during which he allegedly threatened to “slaughter” people. He is also accused of sending an e-mail with additional threats against the organization and is being federally charged.

Concord, California, June 2019: Ross Farca was arrested on charges of making criminal threats and manufacturing and possessing an illegal assault weapon after allegedly claiming online that he wanted to imitate alleged Poway shooter John Earnest, except that Farca also wanted to “carry out a mas [sic] shooting with a body count of over 30-subhumans” while “wearing a Nazi uniform” and livestream it “with Nazi music.”

Las Vegas, Nevada, August 2019: White supremacist Conor Climo was arrested on a federal firearm charge in connection with an alleged plot to attack a Las Vegas LGBTQ bar, or other targets, including a Messianic church and the ADL’s Las Vegas office. Climo allegedly possessed bomb making materials including thermite, sulfuric acid, a soldering iron, circuit boards and other bomb-making components. ADL’s Center on Extremism provided law enforcement officials familiar with the case with warnings about Climo’s online threats against synagogues and information about the neo-Nazi Feuerkrieg Division.

Los Angeles, California, August 2019: Cameron Brunson Blake, an alleged white supremacist, is facing one hate crime charge as well as charges of vandalism of religious property and criminal threats after allegedly carving an anti-Semitic slur into the door of a Venice, California, synagogue and yelling threats and anti-Semitic slurs at a man and his child at a Santa Monica park.

From plotting deadly shooting sprees to possessing large caches of weapons, these extremists threatened several minority groups, including Black and Latinx Americans. Their targets were varied, to say the least, ranging from large retail stores and hospitals to night clubs and news stations.

St. Petersburg, Florida, March 2019: William Shutt allegedly shot at two African-American men stopped in a vehicle next to his own, killing one and wounding the other. At a preliminary hearing, a police officer testified that there was a connection between Shutt and "alt right groups."

Green Township, New Jersey, July 2019: Michael V. Zaremski, who allegedly holds white supremacist and misogynist beliefs, is facing 39 criminal charges including possession of an arsenal of weapons, attempting to manufacture assault weapons, unlawful possession of a weapon while committing bias intimidation, and cyber harassment. According to the indictment, Zaremski had a large amount of anti-Semitic and white supremacist materials on his phone and computer. Zaremski allegedly discussed committing a mass shooting in a hospital-type setting.

Las Vegas, Nevada, August 2019: Self-described white supremacists Johnny Young and Braxton Ryback were arrested at a Las Vegas nightclub after allegedly yelling “white power” and threating to “shoot up the place.” Each man was charged with one count of making false threats in an act of terrorism.

Winter Park, Florida, August 2019: Self-described white nationalist Richard Dean Clayton was arrested for allegedly writing threats on social media with the intent to kill or cause harm. Clayton reportedly posted an August 6 Facebook comment that he had “3 more days of probation left then I get my AR-15 back. Don’t go to Walmart next week.”

Kansas City, Kansas, September 2019: Jarrett William Smith, an alleged white supremacist, was charged with one federal count of distributing information related to explosives and weapons of mass destruction. According to the indictment, Smith provided instructions for constructing a variety of explosive devices, including a cell phone detonator for an IED and a home-made grenade, and how to create explosive material using the heads of matches. The complaint also alleges that Smith discussed killing members of antifa, destroying cell towers and attacking a news station with a vehicular bomb.

McLean, Virginia, September 2019: Andrew Thomasberg, an alleged member of violent neo-Nazi group Atomwaffen Division, was arrested on federal gun charges for possession of guns by a drug user and for making an illegal purchase of an AK-47 for a friend. During Thomasberg’s detention hearing, an FBI agent testified that Thomasberg bragged about committing a racially motivated shooting in the past and lauded white supremacist killers as saints.