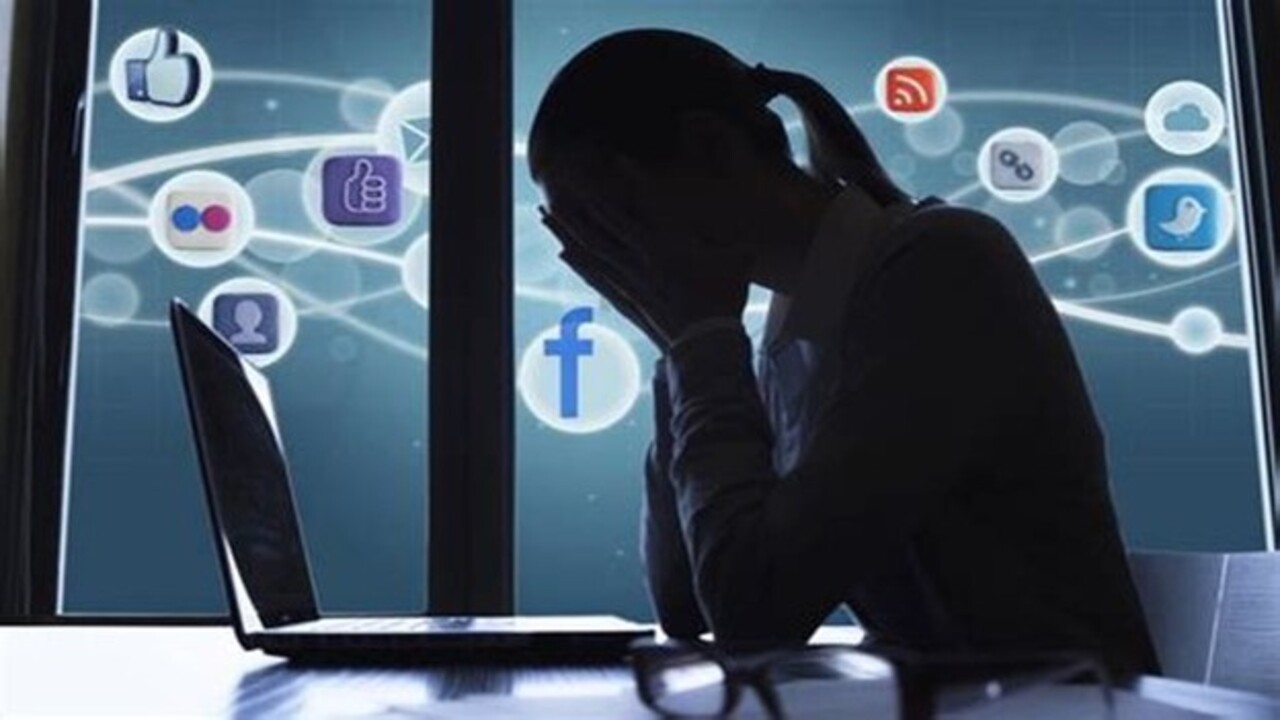 ADL and GLAAD Partner to Counter Anti-LGBTQ+ Extremism and Hate

What is “Grooming?” The Truth Behind the Dangerous, Bigoted Lie Targeting the LGBTQ+ Community

In recent months, a handful of high-follower social media accounts have driven the rapid spread of dangerous and false narratives designed to marginalize and demonize the LGBTQ+ community. Online amplifiers of anti-LGBTQ+ hate and extremism use their influence to push baseless tropes and conspiracy theories to their millions of followers. These claims are frequently picked up by major far right media personalities, expanding their reach. Online amplifiers are key players in an ecosystem of anti-LGBTQ+ hate that drives online harassment campaigns against LGBTQ+ individuals and groups, and spreads narratives which inspire real-world extremist activities, threats and even violence.

The Center on Extremism is tracking several of the biggest online amplifiers of anti-LGBTQ+ extremism: 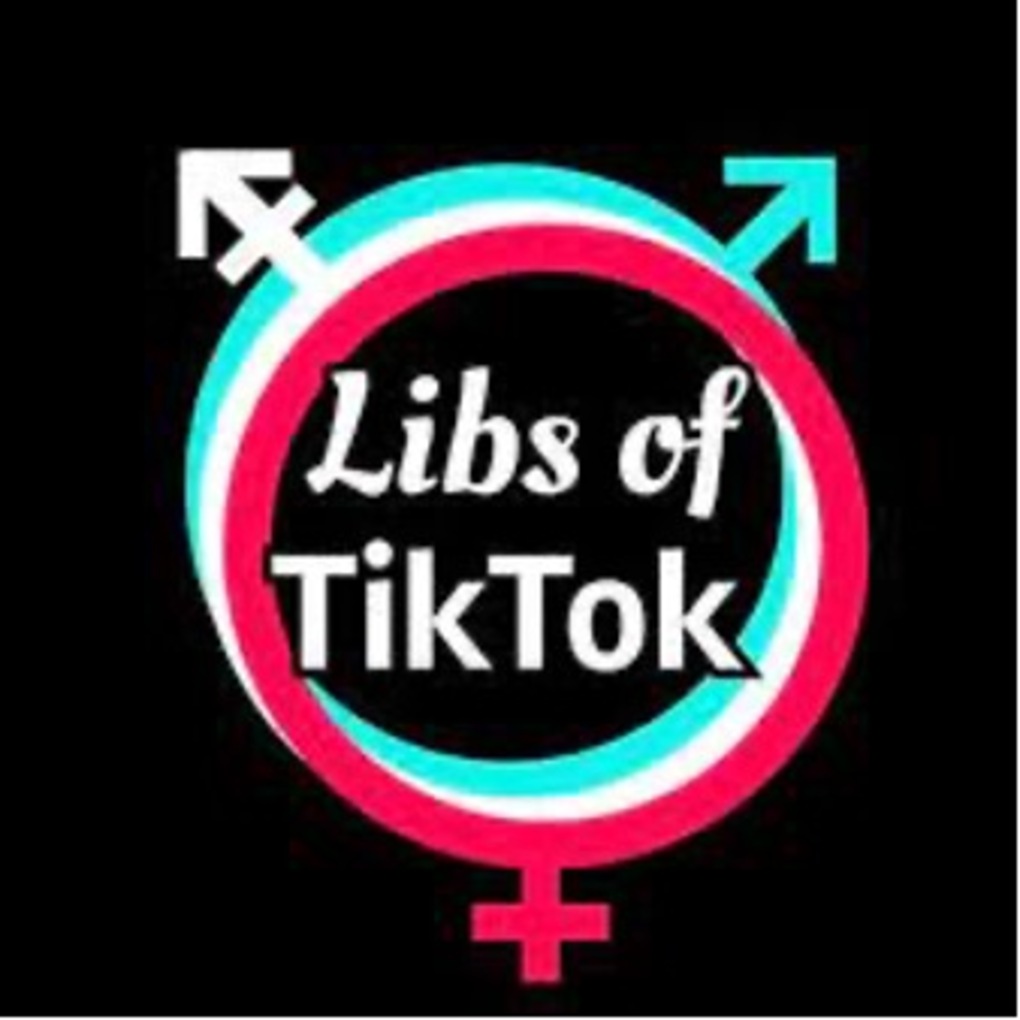 Libs of TikTok (LoTT) is an anti-LGBTQ+ extremist social media account run by Chaya Raichik. Using false allegations of “grooming,” “child abuse” and “indoctrination,” LoTT frequently targets educators, healthcare professionals and drag performers who either identify as LGBTQ+ or work on LGBTQ+-related issues. Notable narratives promoted by LoTT include an “investigation” into Boston Children’s Hospital and a mega thread vilifying drag shows during Pride Month. Those targeted often report experiencing threats, harassment and real-world violence in the wake of the LoTT campaign against them. LoTT, with a large following of 1.7m on Twitter and significant presence on other major social media platforms, is frequently cited and further amplified by right-wing media figures and politicians, including Tucker Carlson, Glenn Greenwald, Ron DeSantis and Marjorie Taylor Greene.

Tweet on Dec. 27th showing LoTT’s promotion of hateful and baseless conspiracy theories regarding the LGBTQ+ community following Raichik’s interview on Tucker Carlson. This post reached an estimated 1.2M viewers, up from LoTT’s average of 984K views per Tweet.

Following LoTT’s inflammatory “investigation” into the gender-affirming care services offered by Boston Children’s Hospital in August 2022, three bomb threats were directed against the facility with two perpetrators directly stating they were targeting services for LGBTQ+ minors. 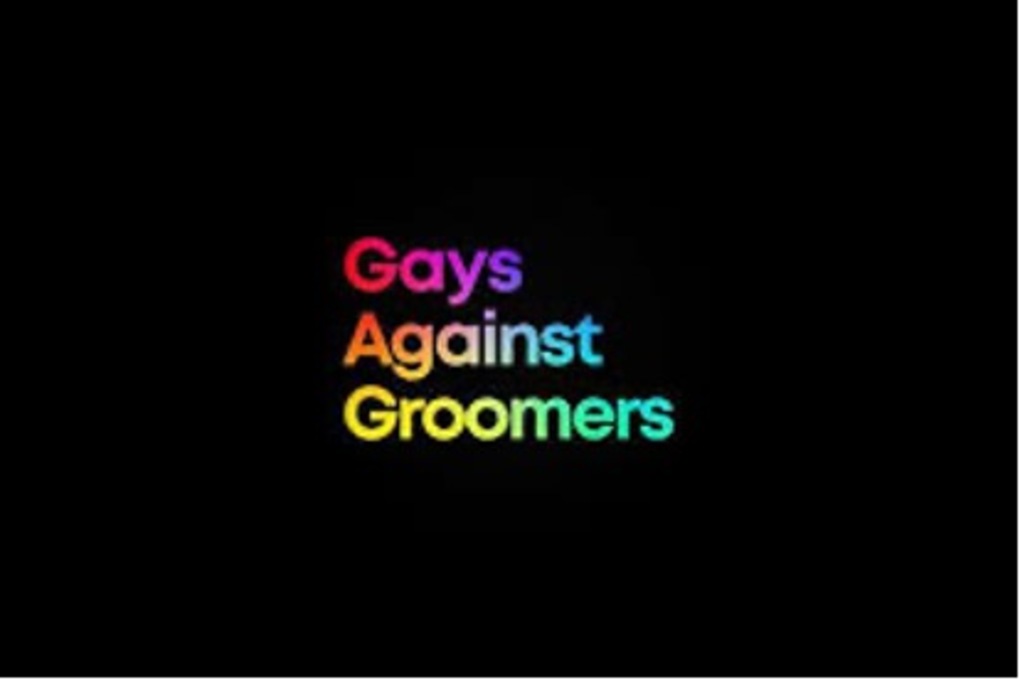 Gays Against Groomers (GAG) is an anti-LGBTQ+ extremist coalition* founded by Jaimee Michell. Like LoTT, GAG peddles dangerous and misleading narratives about the LGBTQ+ community, focusing on false allegations of “grooming” by drag performers, “indoctrination” by LGBTQ+ educators and “child mutilation” by gender-affirming care providers. GAG members Jordan Toste and Anthony Raimondi helped organize a December 2022 rally in Ft. Lauderdale, which centered around these false narratives and was attended by the Proud Boys, a known, violent extremist organization. GAG coordinated the rally with Moms for Liberty and Florida Fathers for Freedom – an example of an emerging coalition of far-right parents’ groups. These organizations seek to mobilize parents and other adults at the grassroots level to engage in anti-LGBTQ+ advocacy and other conservative causes, including anti-critical race theory (CRT) initiatives, often operating under the false pretense of “protecting” children from unfounded claims of “sexualization” and “indoctrination in schools.” GAG has capitalized upon this same messaging, even profiting off “ok groomer,” “protect children” and “protect kids from transitioning” merchandise. GAG maintains a large following on Twitter (162K) and on other social media platforms, and is widely promoted by right-wing media outlets such as One America News Network (OANN) and Fox News.

*Note: While GAG claims that they cannot be anti-gay or anti-lesbian as they themselves identify as gay or lesbian, ADL’s definition of anti-LGBTQ+ extremism includes any person who pushes false claims and conspiracy theories about all or parts of the LGBTQ+ community, regardless of how they personally identify. 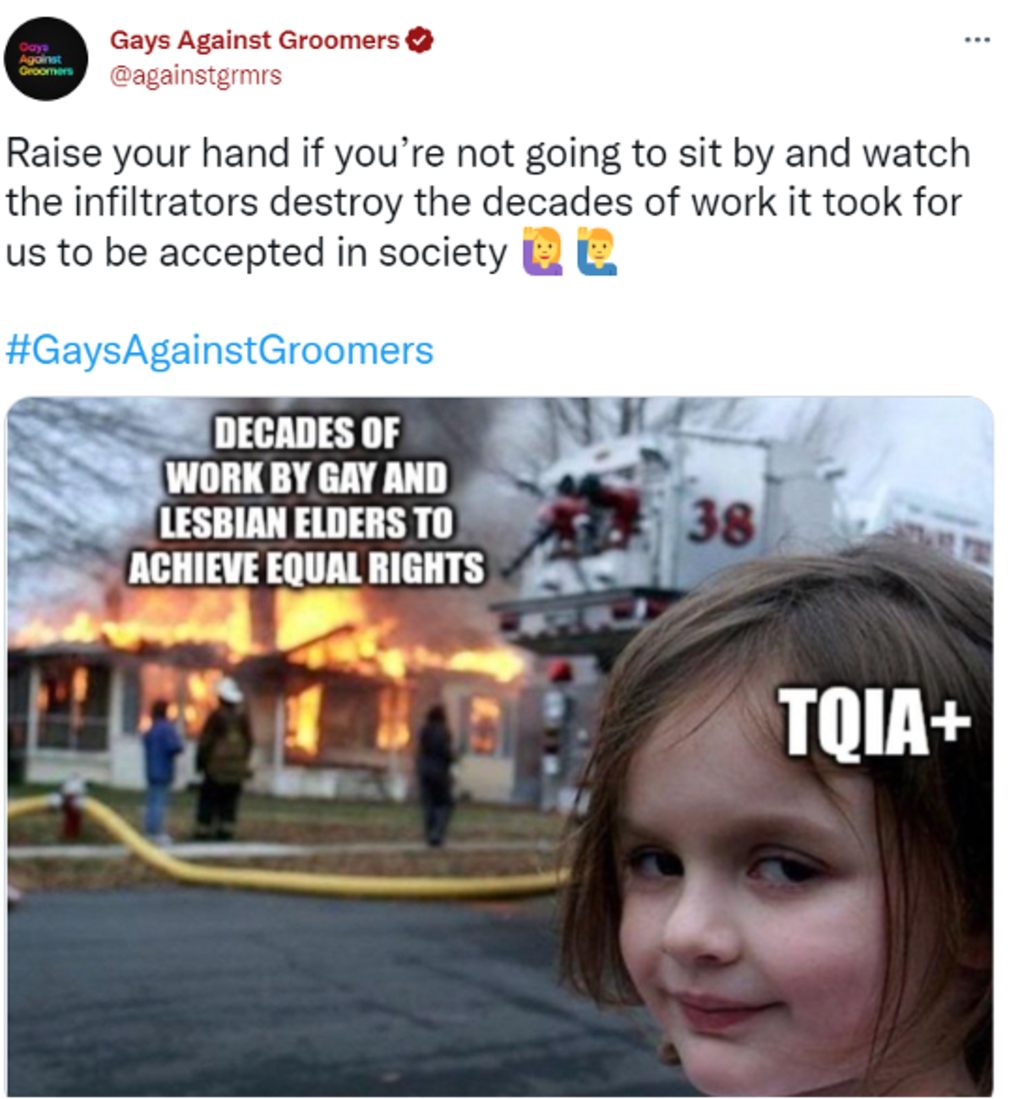 Tweet on Jul. 27th demonstrating GAG’s bias against transgender, queer, intersex, asexual and other non-straight, non-cisgender identities, as well as the promotion of conspiracies (e.g., “infiltration”) against other LGBTQ+ persons. This post reached an estimated 120K viewers, up from GAG’s average of 86K views per Tweet. 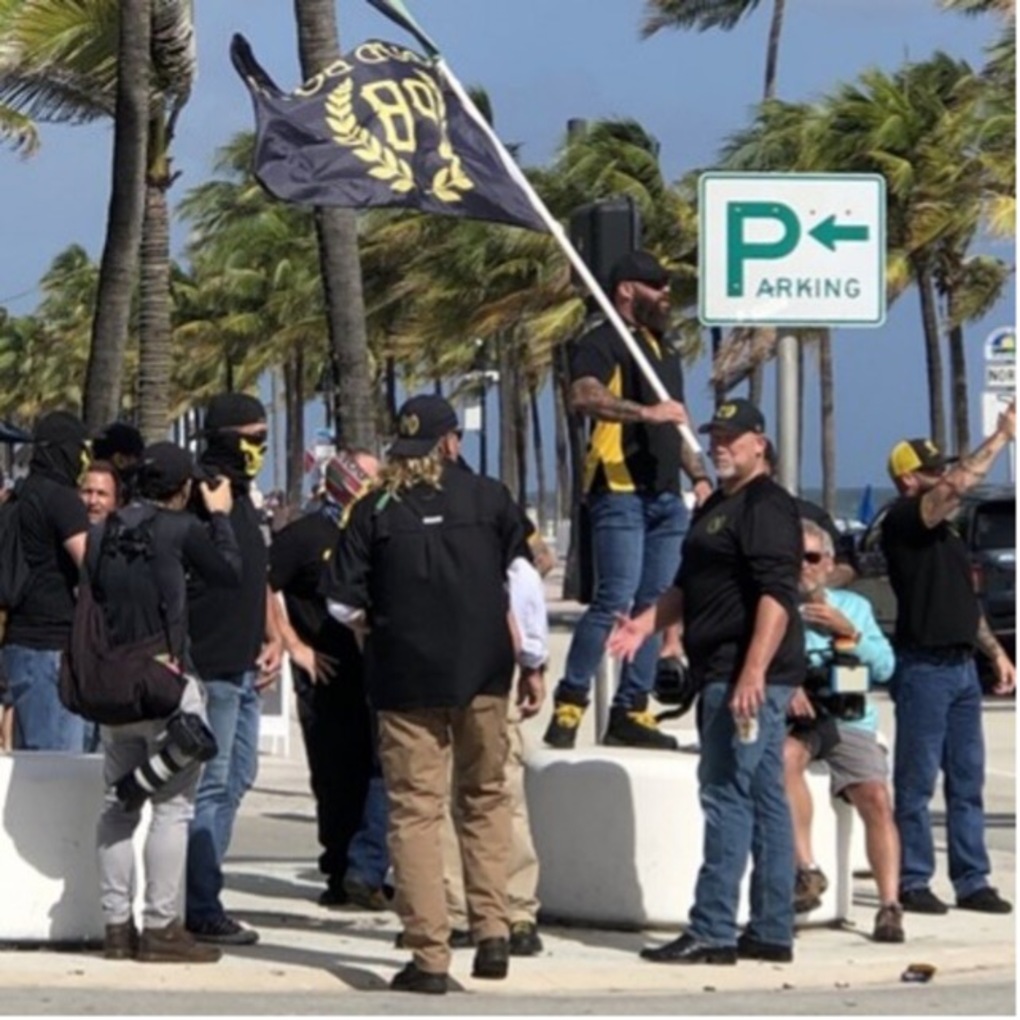 Members of the Proud Boys attending the “Protect the Children” rally in Florida, co-organized by GAG 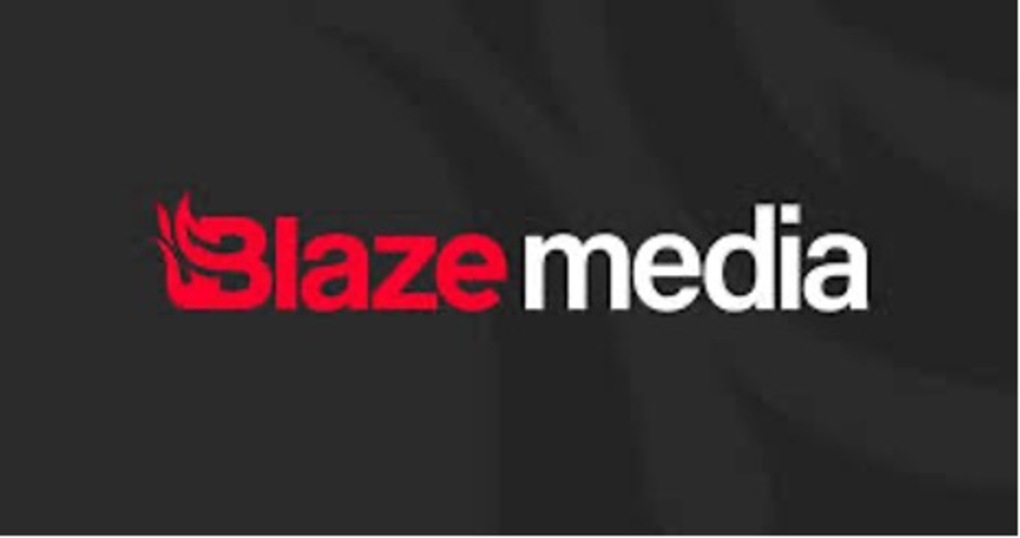 Blaze Media is a right-wing media company run by CEO Tyler Cardon that employs several anti-LGBTQ+ extremists. These pseudo-journalists are directly involved in organizing drag show protests across the country – a trend that has led performers, organizers and attendees to experience threats, harassment and outbreaks of violence that have endangered participants and forced event cancellations. Protesters often use false allegations of “grooming” to incite outrage against these events.

Alex Stein, a Blaze TV host, not only covers the protests, but actually attends and instigates harassment against event attendees and counter-protesters. At one such event, Stein was seen promoting “Guardians of Divinity” member David Nieves, who was recently arrested for assault while allegedly harassing openly gay NYC Councilman Erik Bottcher over his support of LGBTQ+ issues.

Gonzales works closely on Defend Our Kids Texas with Tayler Hansen, a freelance reporter who frequently writes for the far-right media outlet the Gateway Pundit. Hansen recently gained a large following for his undercover “reporting” of drag shows and a corresponding “mega drag thread” targeting the popular “A Drag Queen Christmas” tour, which was covered on Fox News. ADL has tracked at least eight instances of threats, harassment and/or protests leveraged against this tour nationwide; Florida Gov. Ron DeSantis also launched a specious criminal investigation into the drag show following reporting by Hansen and others on false allegations of child “grooming” and “sexualization” at these events.

Tweet by Gonzales on Dec. 27th advocating for threats to and harassment of drag performers, while pushing false narratives about “child abuse” from the LGBTQ+ community. This post reached an estimated 350K viewers, up from Gonzales’ average of 97K views per Tweet. 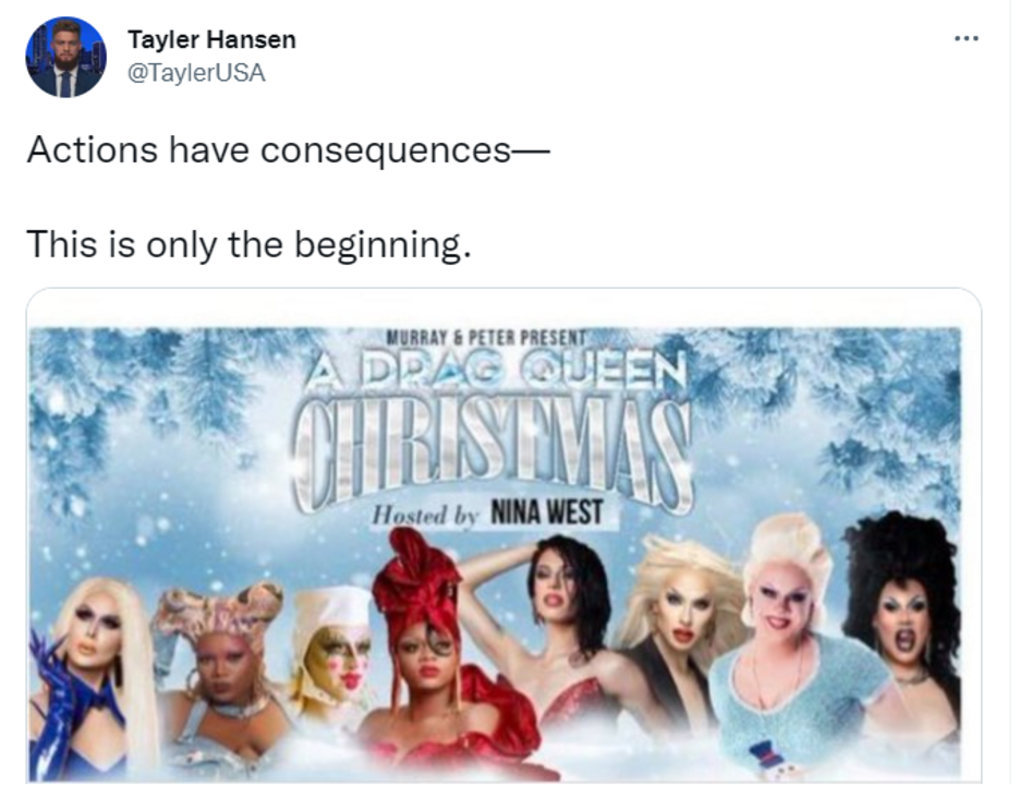 Tweet by Hansen on Dec. 27th calling for “consequences” against a drag show tour already experiencing threats and harassment nationwide. This post reached an estimated 35K viewers, down from Hansen’s average of 68K views per Tweet. Hansen’s average views are likely inflated by his viral “mega drag thread” which, according to Twitter, received over 2.9M views. 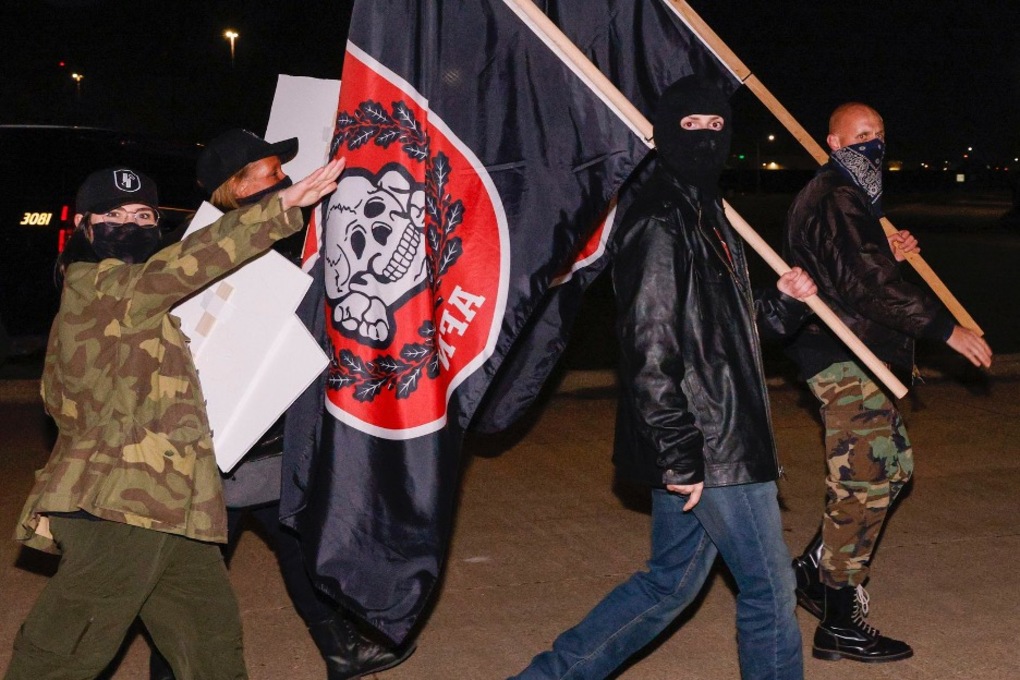 Following online promotion of the event amplified in part by Gonzales & Hansen, armed members of the Aryan Freedom Network protest a drag show in Grand Prairie, TX on Dec. 17th. 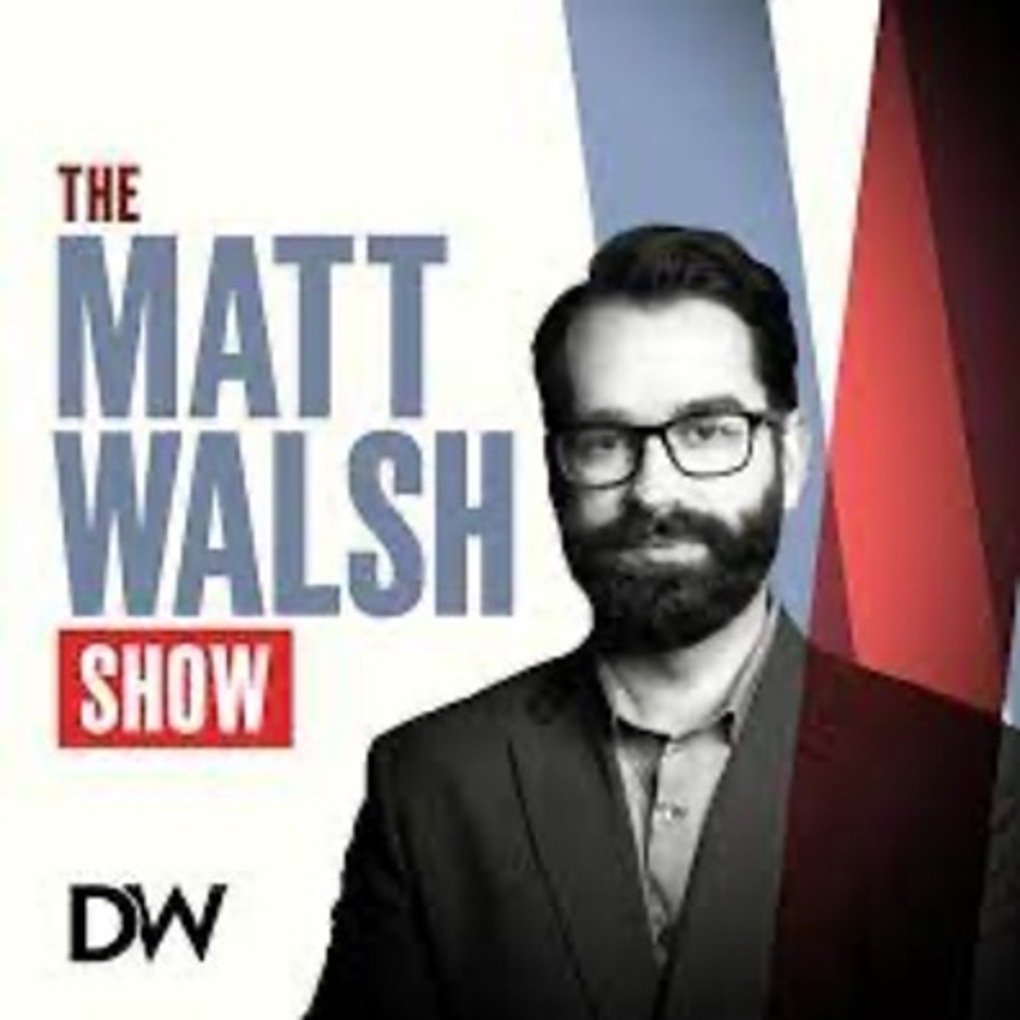 Matt Walsh is an anti-LGBTQ+ extremist commentator for the far-right media outlet, "The Daily Wire." As seen in his anti-transgender content such as his documentary “What Is a Woman?,” Walsh is one of the biggest purveyors of erroneous and harmful narratives surrounding gender-affirming care for transgender and non-binary youth. His “Rally to End Child Mutilation” targeted one such provider in Tennessee and was attended by known violent extremists as well as prominent right-wing politicians. Walsh maintains over 1.2M Twitter followers and nearly 2M YouTube subscribers, and his content is regularly promoted by mainstream conservative media figures such as Piers Morgan, Joe Rogan and Tucker Carlson.

Tweet on Dec. 14th following the passage of the “Respect for Marriage” Act which codified same-sex and interracial marriages, demonstrating Walsh’s attempts to marginalize and restrict the rights of the LGBTQ+ community. This post reached an estimated 8.4M viewers, up from Walsh’s average of 384K views per Tweet.

Explicit calls for violence against gender-affirming care providers, alongside extremist groups including members of the Proud Boys, were present at Walsh’s “Rally to End Child Mutilation” in Tennessee. 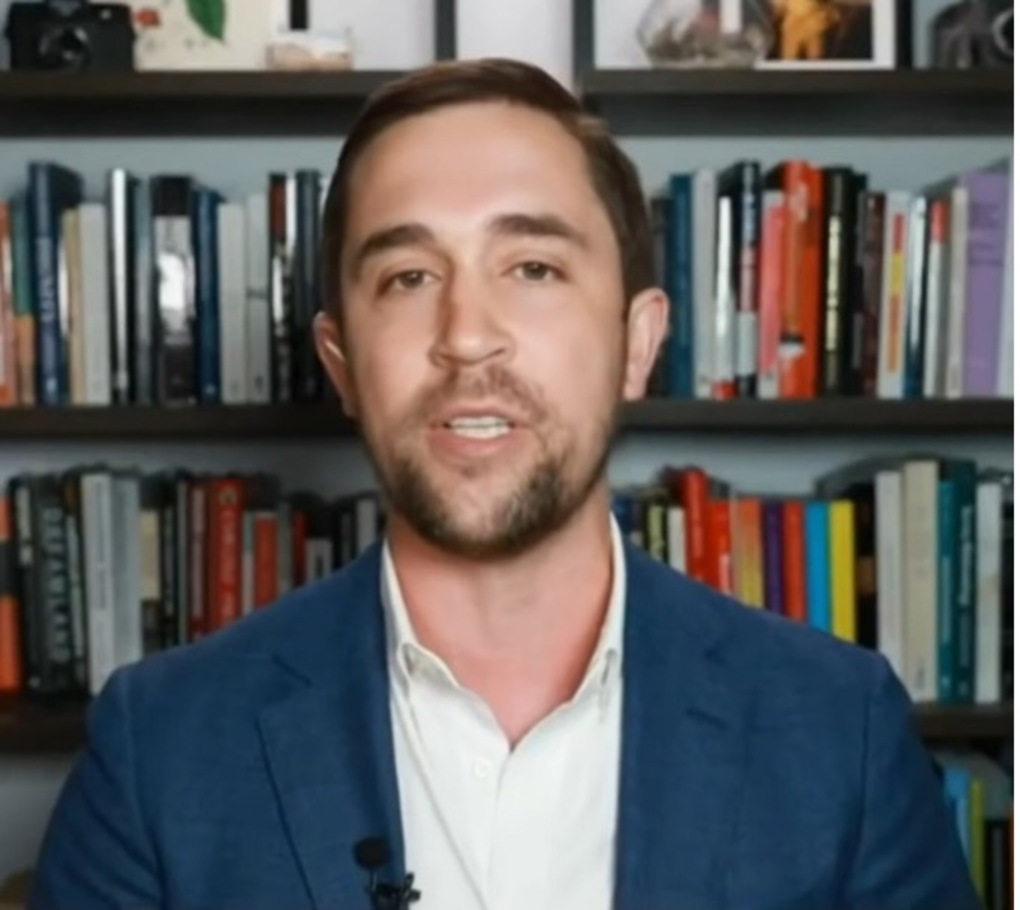 Christopher F. Rufo is an anti-LGBTQ+ extremist working for the Manhattan Institute. Previously known for his fearmongering around critical race theory, Rufo has now turned his focus to the alleged “dangers” of “gender ideology” – a baseless, decades-old conspiracy theory alleging that the progressive movement seeks to destroy traditional families and conservative values by expanding the rights of women and LGBTQ+ people. Rufo’s endeavors include a “Parent’s Guide to Radical Gender Theory” in which he promotes demonstrably false conspiracy theories, including that progressives want to “eliminate the words ‘man,’ ‘woman,’ ‘mom’ and ‘dad,’” and that “radical gender theory wants to replace parents with a state-backed sexual ideology.” Rufo has also recently been appointed by Gov. DeSantis to the board of trustees for the New College of Florida, where he intends to “[lay] siege to the institutions” by abolishing diversity, equity, and inclusion (DEI) programs which include LGBTQ+ initiatives. With 473K Twitter followers and presence on other social media platforms, Rufo’s anti-LGBTQ+ narratives are further spread by right-wing media figures like Tucker Carlson and have even been incorporated into legislation, such as Florida’s “Don’t Say Gay” bill.

Tweets on Jun. 17th in which Rufo promotes dangerous narratives about drag performers, including false allegations of child “sexualization,” and misleads his audience with “factually accurate” claims that all drag performers are transgender individuals and sex workers. This post reached an estimated 3.1M viewers, up from Rufo’s average of 176K views per Tweet.

Online amplifiers of anti-LGBTQ+ extremism spread false information against the LGBTQ+ community, which has led to real-world harm. ADL has taken a number of measures to combat the detrimental effects of this vitriolic online activity, including partnering with social media platforms to develop and enforce robust Terms of Service that prevent online hate and harassment. Additionally, ADL is advocating for government partners to strengthen laws against perpetrators of online hate, as well as consulting with law enforcement partners to act on online hate speech that incites violence and/or credible threats. ADL will continue to develop community partnerships with LGBTQ+ leaders and organizations such as GLAAD, in efforts to counter hate speech with positive speech.

The research in this article was made possible thanks to a partnership between ADL and GLAAD focused on countering anti-LGBTQ+ extremism and hate. Click here to learn more about this critical partnership.