After the firing of the NBA’s Cleveland Cavaliers head coach David Blatt, some social media users responded by posting vehemently anti-Israel, and some anti-Jewish, personal attacks against Blatt, who holds both Israeli and American citizenship.

Hostile verbal attacks on individuals for being Israeli citizens or supporters of Israel appear to have become more commonplace in recent years both online and offline as well as some look to demonize the Jewish state in any way possible.

Below are just a few examples from the dozens of social media posts personally attacking Blatt regarding his citizenship or religious identity rather than discussing his abilities as a coach: 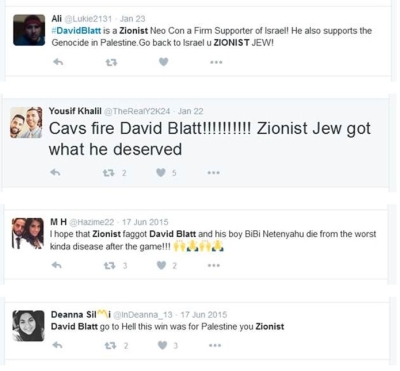 This is not the first time such open hostility against Israelis or Jews in sports has been expressed in such an ugly fashion on social media. After Israeli bas­ket­ball team Mac­cabi Tel Aviv beat Real Madrid in the Euroleague final in 2014, there was an outpouring of anti-Semitic messages on Twitter. Twitter also erupted with anti-Semitic commentary after Milwaukee Brewers outfielder Ryan Braun was suspended from Major League Baseball in 2013.