With Passover approaching, Israeli authorities are gearing up for potential tensions over the Temple Mount/Noble Sanctuary.

The sacred space has long been the focal point of religious and political tensions and conflicts. The responsibility for the site is shared by Israel, which has sovereignty over the site, and Jor­dan, whose Cus­to­dian Min­istry has man­aged the site since the 1994 peace treaty between Jor­dan and Israel. The agreement includes a clause restricting Jews from praying on the Mount, known informally as the “status-quo.” The Waqf, an Islamic religious trust, overseas the day-to-day operations at the site. 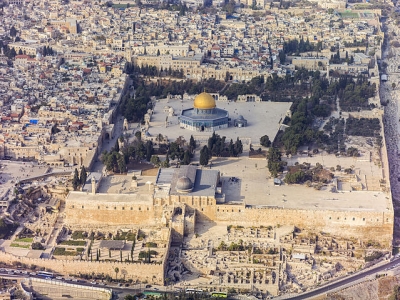 There have been many flashpoints.  For years, there have been accusations among Palestinians and across the region of a conspiracy by Israel to “Judaize” Jerusalem, particularly when it comes to this shared holy site. In 2000, then-Israeli opposition leader Ariel Sharon visited the site, which the Palestinians used as an excuse to launch the Second Intifada. Hamas, the Gaza-based terror group, even praised the recent bus bombing in Jerusalem as a “natural reaction” to Israel’s “desecration of the Al-Aqsa Mosque” located on the site.

In recent years tensions relating to the site have intensified, with a noticeable increase in the number of Jews visiting and secretly praying on the Mount, a violation of the status-quo. Among them, Israeli government ministers and politicians, some of whom have called for Jews to be allowed to pray on the Mount.

And over the past week, other incidents have focused attention on the sacred space.  Last week, the Temple Mount Institute, a Jewish messianic organization, conducted a secret Jewish wedding on the Mount, which was filmed and posted on social media. While it may sound strange to condemn a Jewish wedding at a holy Jewish site, the incident was part of the larger, potentially explosive effort by some on the religious right, to change the status quo on the Temple Mount.

And from the Palestinian side, there was the adoption by the UNESCO executive board of a highly-biased, one-sided resolution on Jerusalem which ignored the Jewish connection to holy sites like the Temple Mount and Western Wall. The resolution described both sites only in their Muslim/Arabic names, alleged Israel was planting fake Jewish graves, and criticized, on political grounds, a recent Israeli decision to build an egalitarian prayer area in the Western Wall Plaza. Shockingly, a number of Western countries voted to support the resolution, including France, Spain and Sweden.

The Israeli government, much to its credit, has taken steps to reduce tensions, including banning all government ministers and Knesset members from visiting the Mount. They have also worked closely with US and Jordanian governments on a plan to install surveillance cameras on the Temple Mount, which would help refute claims that Israel is violating the status quo. In an unfortunate development however, Jordan announced this week that it was dropping this plan due to objections from the Palestinians who were “skeptical” about the initiative. Palestinians had also placed notices on the Mount threatening to smash any security cameras which were installed. This is not an encouraging development.

In the ancient tradition of Passover, Jews were required to make a pilgrimage to Jerusalem and bring a special Passover sacrifice to the Jewish Temple. While the sacrifice is no longer practiced, the next week will bring many tens of thousands of Jews to the Old City of Jerusalem and Western Wall area adjacent to the Temple Mount for prayers, blessings and celebrations.

While Israel must continue efforts to ensure the status-quo remain unchanged, the Palestinians must refrain from further escalating the tensions by using the Mount as a political issue to attack Israel. Any serious escalation of tensions over the Temple Mount/Noble Sanctuary - over Passover and beyond - could turn into a potentially explosive and violent situation.