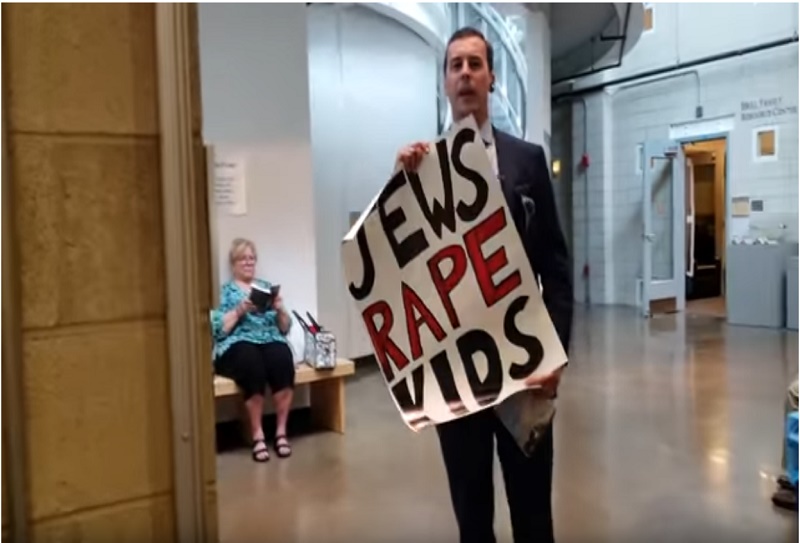 Extremism and Intolerance Are on the Ballot in 2018

Little has been an outspoken anti-Semite for at least a year, but his latest speeches and online comments indicate he’s operating at a new level of bigotry and paranoia. He has fully embraced the neo-Nazi label, taking to social media to extol “Saint Adolf’s” efforts to eliminate the Jewish population.

Anti-Semitism fueled Little’s campaign for Dianne Feinstein’s U.S. Senate seat, and when that bid ended in a crushing defeat, he cried foul, blaming “Jewish supremacists and Zionists” and “broken machines” for his loss.  In a post-election online commentary, he claimed “hundreds of thousands of voters show up to polls to find out ‘an error’ had removed from rolls…we won big tonight, the ZOG just doesn’t know it yet.” ZOG is an acronym for "Zionist Occupied Government," which reflects the white supremacist belief that the U.S. government is controlled by Jews.

Little’s tour has taken him from Portland, Oregon to Portland, Maine, with more than a dozen stops in between, including Olympia, Seattle, Missoula, Helena, Alberton, Fargo, Minneapolis, Skokie, Providence, Princeton , Boston, and New York City, or as he calls it, “the vipers’ nest.”

Throughout his tour, Little demonstrated an obsessive focus on Jews and anti-Semitic conspiracy theories. He carried a sign reading, “Jews Rape Kids,” and attempted to provoke reactions from the public. Generally, people ignored him, although someone did throw a soda can in his direction, while another yelled, “fu** you.” 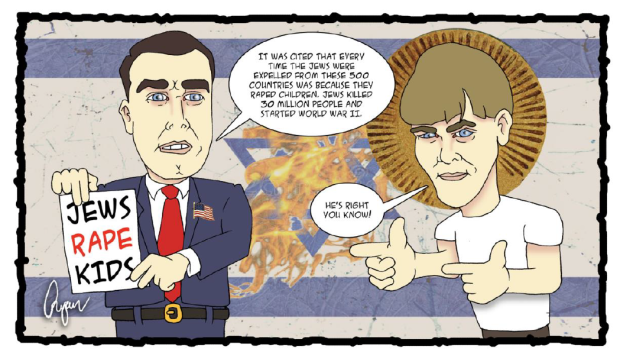 Little, with his sign, gets support from Dylann Roof, a white supremacist who shot and killed nine black parishioners at a church in Charleston, South Carolina in 2015. (Cartoon by one of Little’s supporters)

His tour brought him to a range of venues, from the state fair in Minot, North Dakota, Brown University in Providence and the Illinois Holocaust Museum and Education Center in Skokie. As he walked through the bookstore of the Skokie museum, Little played Fleetwood Mac’s Little Lies, presumably to emphasize his Holocaust denial. He livestreamed most of his so-called “J Walks,” and encouraged viewers to fund his efforts.

Little was joined in Princeton by the New Jersey European Heritage Association (NJEHA), a white supremacist group that has distributed propaganda claiming the white race is an endangered species and promoting the white supremacist slogan “We must secure the existence of our people and a future for white children.”  NJEHA members were also on hand at the Unite the Right 2 rally in Washington, D.C.

As of August 9, Little was in Washington, D.C., where white nationalists are expected to gather August 11-12 for the Unite the Right anniversary rally. Little has vehemently denounced the Jason Kessler-organized anniversary event.

Here are the stops on Little’s tour, and some of the anti-Semitic vitriol he shared along the way.

Unless otherwise noted, all comments are printed verbatim, including spelling and punctuation errors.

July 22, Washington State: “Touring the Pac NW my heart is warmed & my soul is lifted, seeing all the young white mothers with their happy children, & smiling white husbands. God damn the jews for trying to destroy the family-friendly culture of the United States, God damn the jews to the fiery pits of hell, where they belong. Shame on us for having allowed jews to nest in our institutions.” (Gab)

July 25, Alberton, Montana: “Still all white towns, beautiful all white families here. White genocide is starting to creep out from Missoula.  The Jews are trying to ethnically cleanse this state…” (YouTube)

Jul 25, Montana: “I dreamed of the coming expulsion of the jews from the US last night. It was glorious, church bells rang in every town as the hostile foreign element was assembled for transport to the airports and seaports. You will live to experience liberation if you work towards it.” (Gab)

July 28, Wisconsin/Minnesota: “I hope to force @POTUS to name the jew” (Gab)

July 28, Minneapolis, Minnesota: “God knows these nation-wrecking Jews are doing everything they can to destroy the nice neighborhoods I’ve seen around here.” (YouTube)

July 29, Skokie, Illinois: “With Jews, you lose, non-stop, until you die from all the losing.” (Gab)

July 29, Skokie, Illinois: “It’s important to remember that almost every country that has expelled the Jews has cited child-raping, and child sacrifice, and child abuse as the reasons for expulsion of the Jews.” (YouTube)

July 29, Skokie, Illinois: “It was cited every time that the Jews were expelled from these 500 countries, it was because they raped children. Jews killed 30 million people prior to WWII. That’s a lot more than 6 million.” (YouTube)

August 3, Portland, Maine: “What if I could also prove that at all levels of government and military intelligence and the IDF itself, Israel has been supporting ISIS consistently in its genocidal program against ethnic religious minorities.”  (YouTube)

August 3, 2018 Kennebunkport, Maine: “Of course, we’re gonna have to bulldoze the buildings on the property, but that isn’t much of a loss because that, to me, is a blemish on the land. That is the Zionist-occupied government’s Bush compound.” (YouTube)

August 6, 2018 Cambridge, Harvard University: “There was a man in the 1920s who wrote a book and he predicted: should Israel ever come into existence as a Zionist state, it will become an international criminal base for swindlers who have been found out. So what do you think the most pedophile-friendly country in the world is right now?” (YouTube)

August 6, 2018 Boston, Boston University: “Jews are getting away with child-rape on biblical scales.” (YouTube) 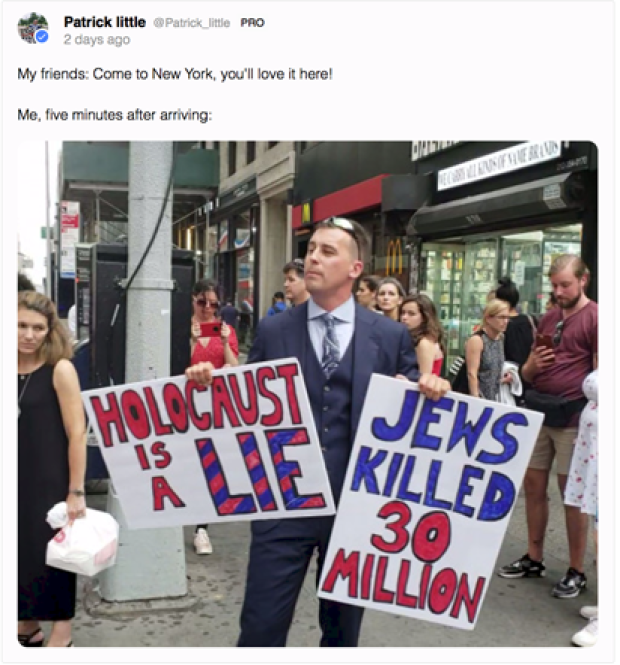 August 8, 2018 Princeton, New Jersey:  “I ran against a dual-citizen named Dianne Feinstein, right. So does someone who is a foreign citizen, has a house in Israel, vote in the US senate?...Crazy, right?” (YouTube)

August 9, Washington, DC (outside the White House, following a stop at the Israeli Embassy): “As 500 other countries have done before, we should expel the Jews before they’re able to wreck this country any further. It’s not radical. This is something that is done.” (YouTube)

August 13, Boca Raton, Florida: After a man attempted to grab Little’s signs, Little claimed he’d been “assaulted and battered,” and said he would press charges against his “attacker.”

Later, Little said about the Holocaust: "It is a belief, it’s not something that actually happened." (YouTube)

August 13, South Beach, Miami, Florida: “What I wanna do is take all that money we’re giving to Israel, billions and billions of dollars, and give that out. Take that Jewish money that the Jews are getting just for being Jews and give that to the African American descendants of slaves in this country to address the Jewish legacy of slavery.” (YouTube)

August 17, Coachella Valley, California: “It’s not just John F. Kennedy…it’s also General Patton is also the man who tried to get us off from Jewish dollars and on to American greenbacks that weren’t controlled by Jewish bankers. It was also Abraham Lincoln killed by a Jew, John Wilkes Booth, so you have to remember some of the greatest American personalities in history were people who were killed because of their opposition to Jewish tyranny.” (YouTube)

August 17, Twentynine Palms Marine Corps Base, California: “Jews have repeatedly jeopardized the national security interests of this country to advance the interests of Israel.” (YouTube)

August 19, Carlsbad, California: “Jews are less than 2% of the population of this country, and they make up almost all of Hollywood and almost all of the news media.” (YouTube)

As of August 20, Little was in Los Angeles, California.