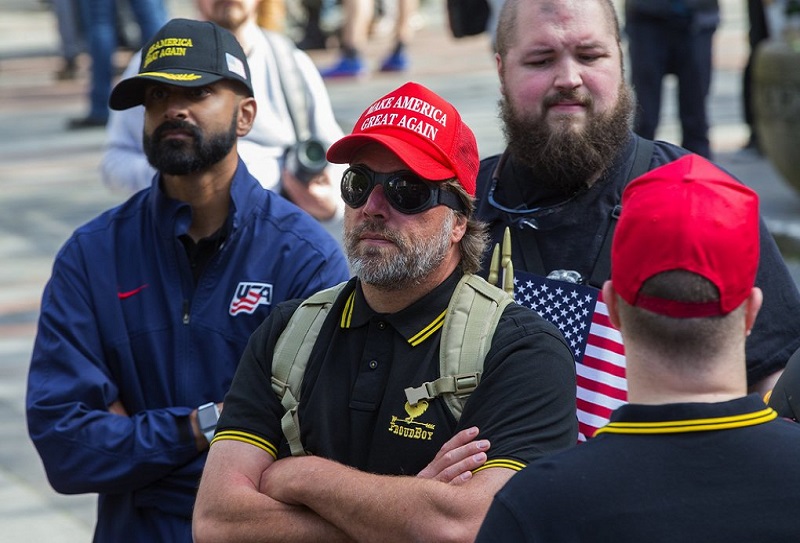 Members of Patriot Prayer and the Proud Boys are gearing up for an August 4th “Freedom March” in Portland, Oregon, sparking concerns about the possibility of violent confrontations between the far-right groups and counter-protesters, including antifa.

Both Patriot Prayer and Proud Boys espouse virulently anti-Muslim views, are vocally pro-Trump, and are known for their deliberate provocations of left-leaning West Coast communities.

Billed as a campaign event for Patriot Prayer founder Joey Gibson, who is running for U.S. Senate in Washington State, the rally has been advertised widely on social media, including multiple Facebook videos promoting Gibson’s candidacy and his free-speech platform.

The Proud Boys are providing “security” for the event, which Gibson now says will take place by the Portland waterfront, rather than the original location, which was on federal land. Some have speculated that the new location was chosen because it will allow attendees to carry firearms.

Portland has seen a number of violent clashes between Gibson and his supporters (including Proud Boys) and counter-protesters, most recently on June 30, when five people were sent to the hospital, including one counter-protester who reportedly suffered a brain hemorrhage.

Online, Patriot Prayer and Proud Boys members have been talking up the August 4th event for weeks, fundraising online and commenting on how much they are looking forward “defending freedom” and confronting “communist” counter-protesters. One promotional video shows a missile emblazoned with Joey Gibson’s name falling towards its target – an animated “Antifa” sign. 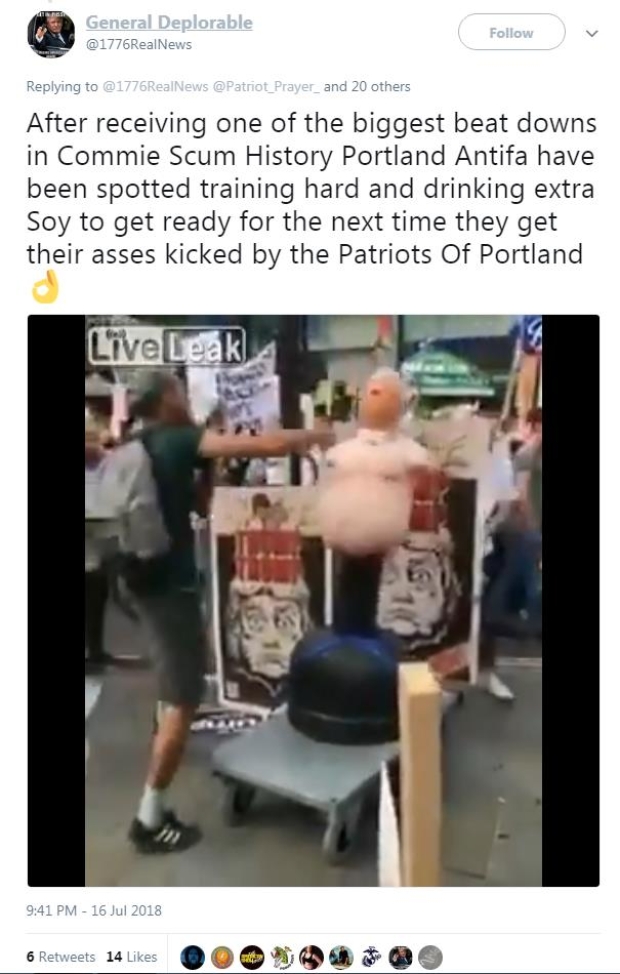 The potential for violent confrontation is a serious concern; violence could attract additional, more hardcore extremists, including white supremacists and anti-government militia members, a number of whom have shown up at past Patriot Prayer events. Any bloodshed may be used as promotional fodder for the Proud Boys and Patriot Prayer, who are in constant recruitment mode.

Gibson has been hyping the event for weeks, sharing details with conspiracy theorist Alex Jones, who featured Gibson and the August 4 rally on his radio show. “We’re going to send reporters,” Jones said. “Hell, I might even come.” Proud Boy Ethan Nordean also talked up the rally during a recent appearance on Jones’s show. When asked why they were holding the event, Nordean essentially admitted the goal was to bait counter-protesters, saying, “Well, we're going to see how the city reacts, and we'll see if they step up their leadership and actually provide security and protection against these antifa thugs.”

Members of Patriot Prayer had planned to travel to Berkeley, California, for a second right-wing, self-promotional rally on August 5, but Gibson announced via a July 27 video that his group was pulling out of the event, citing “disorganization.”  Proud Boys’ Gavin McInnes likewise announced his group will not be in California, tweeting on July 26: “#ProudBoys officially DISAVOW the Aug 5 rally in Berkeley. No matter how good their intentions, it is poised to be twisted by the media into some kind of Nazi riot and we don't want nuthin to do with it.”

Joey Gibson is the founder of Patriot Prayer, a putatively religious far-right group that claims to promote free speech while agitating against what they call “commie scum.” Members have been involved in numerous skirmishes with left-wing protesters – confrontations that appear to be the group’s true primary objective.

In a video pitch for the August 4th rally, Gibson says that “We will make sure the country sees what’s happening in Portland, Seattle, in Berkeley, in San Francisco,” presumably referencing those cities’ liberal policies.

A number of Patriot Prayer members have been arrested during rallies, on charges ranging from disorderly conduct to assault.

Gibson has organized several marches against “Sharia law,” including one in partnership with ACT for America, an Islamaphobic group run by Brigitte Gabriel. He was arrested in May after he and four others brought guns onto the University of Washington campus, apparently as part of a pro-gun demonstration.

Gibson, who hopes to challenge Democrat Maria Cantwell for her U.S. Senate seat, takes a number of libertarian stances, railing against big Pharma and government bureaucracy even as he supports LGBTQ rights and the decriminalization of marijuana. He is a religious Christian, frequently citing God and injecting a preacher-like intensity into his speeches.

In videos promoting the August 4 rally, Gibson calls for followers to stand against “evil,” as images of masked antifa are shown.  He goes on to say, “To those who say we are too aggressive, let me say this: It is better to take action, to be too aggressive, than to take no action at all.”

Another video, posted on July 20, compares Gibson to Martin Luther King, Jr.: “It’s so important that we go into Portland…” intones a voice that seems to be Gibson’s.  “You have to understand, where did Martin Luther King go? Where did he go? Did he go into the cities where they wouldn’t get beat up, where they wouldn’t be met with violence, no he went into the most dangerous cities, the cities that were absolutely disgusted by Black men marching. So let’s support one another and continue to inspire those around you and the rest of the country.”

Gavin McInnes and the Proud Boys

The Proud Boys, founded in 2016 by Gavin McInnes, are a right-wing group that walks the line between the alt lite (Islamophobic, misogynistic) and the alt right (racist and anti-Semitic). Members have increasingly been involved in physical altercations with counter-protesters and antifa.

Proud Boys, who call themselves “Western chauvinists” fighting the “forces of the left,” earn status by performing rituals – some of which are violent.  Their online vetting process (which requires prospective members to provide recorded oaths) supplies ready-made propaganda that’s easily shared on social media.

The group sees themselves as warriors for free speech and against antifa and the left. The Proud Boys’ military wing, the Fraternal Order of the Alt Knights (or FOAK), focuses on street confrontations, a tactic that’s increasingly popular among some alt right groups. At a June rally in Portland, Ethan Nordean, aka Rufio Panman, punched an antifa protester, earning the title “Proud Boy of the Week.”

The group is highly decentralized – while McInnes is the de facto leader, Proud Boys around the country have acted independently. They have shown up at white supremacist gatherings, marching alongside Identity Evropa and the NSM. They’ve also shared the stage with Oath Keepers, an anti-government militia group, at “free speech” and “patriot” events.

The Proud Boys – and McInnes – explicitly condemn white supremacy, and say they welcome gay and non-white members, which makes them targets for white supremacists, who refer to members as “cucks.” That said, their sexist, Islamophobic, anti-immigration and anti-multiculturalism rhetoric attracts an audience that tends to be white and male

McInnes has decried racism, but has made statements in the past that tell a different story. McInnes was accused of anti-Semitism in March 2017, when he posted a video on Rebel Media called "Ten Things I Hate about Jews," which was later retitled "Ten Things I Hate About Israel." He has been criticized by the alt right for refusing to promote the conspiracy theory that Jews control the world. McInnis eschews the white supremacist label and describes himself as a "Western chauvinist” who hails "Judeo-Christian values" as superior to all others.