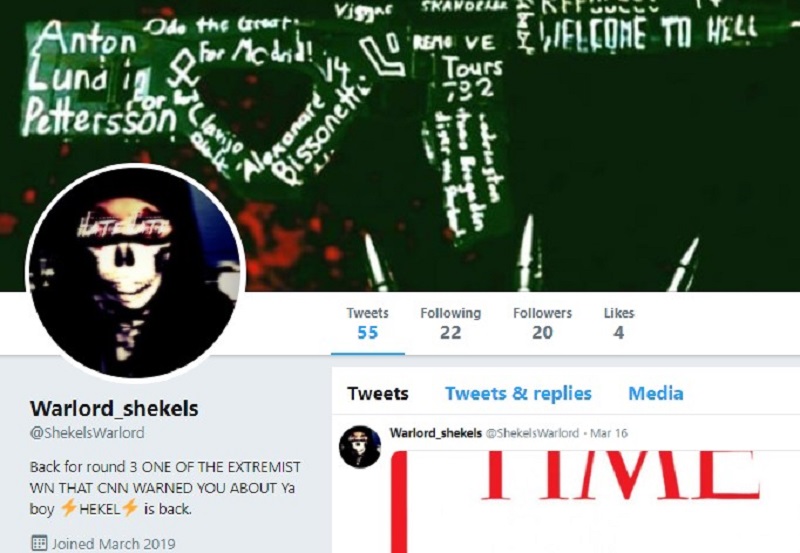 In late March, FBI agents arrested a Pennsylvania white supremacist for allegedly making racist threats online. On April 1, 2019, Corbin Kauffman of Lehighton, Pennsylvania, was charged with interstate transmission of threats to injure the person of another. According to the U.S. Department of Justice, the maximum penalty for this offense is five years of imprisonment for each violation and a term of supervised release following imprisonment and a fine, but judges are given significant leeway in determining the final sentence.

On March 28, the ADL’s Center on Extremism alerted law enforcement to violent online rhetoric emanating from several social media accounts using variations of the screen name Shekels. The posts included hundreds of anti-Semitic, anti-black and anti-Muslim posts, as well as posts of the individual’s own anti-Semitic acts of vandalism. According to the Department of Justice that individual was identified as Corbin Kauffman.

In early March, after being banned from other social media platforms, Kauffman created a profile on Minds.com, a fringe social media site, using the screen name KingShekels. From March 3 through 29, Kauffman used the profile to post approximately 600 messages, images and videos. The vast majority of posts presented white supremacist beliefs and visions of violence.

Kauffman’s most alarming posts paired threats of violence with images of his weapons. On March 15, between posts seeming to echo and praise Brenton Tarrant’s New Zealand mosque attack, Kauffman posted an image of his own AR-15 style rifle with the words, “Let’s get it.”

Kauffman also used his Minds profile to express support for accelerationism, the idea that extreme racial violence can accelerate or cause societal collapse, paving the way for white supremacists to build and control a white ethno-state. In a March 13, 2019 Minds post, Kauffman wrote, “I’m ready for the collapse. Let’s accelerate things a bit.” 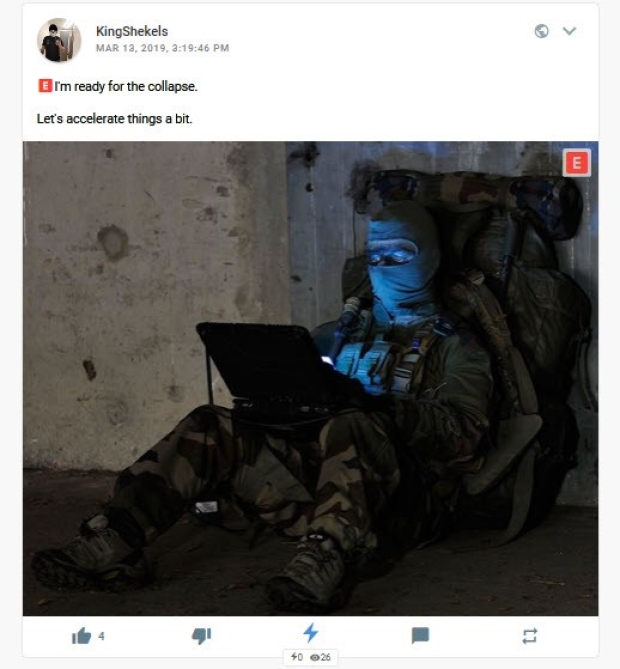 Of his 600 or so posts, approximately 140 were anti-Semitic or related to Holocaust denial. Another 60 posts focused on Hitler, Nazi Germany, German soldiers or Nazi symbols. And 59 of his posts were degrading or critical of other minorities including African Americans, Muslims and the LGBT community.

Among his calls for violence: 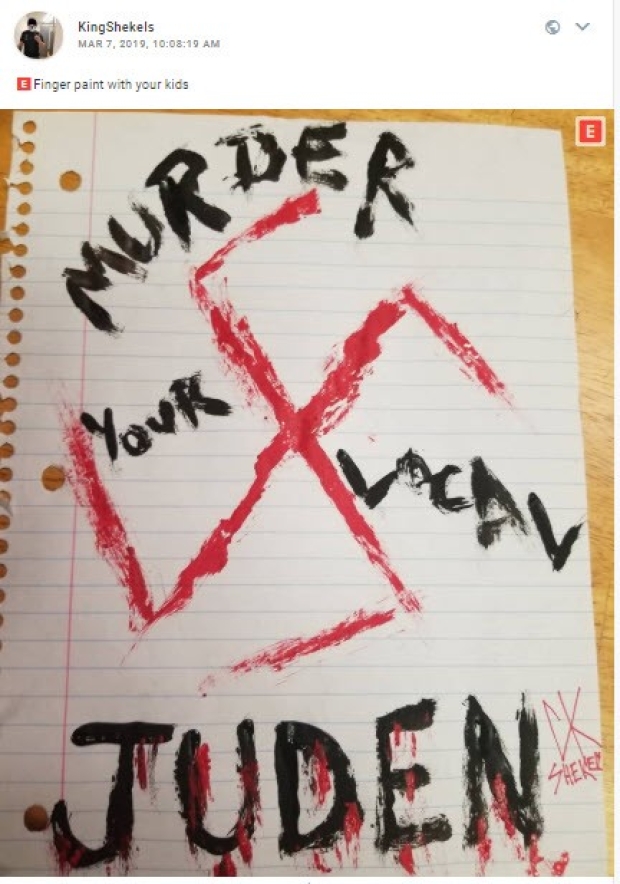 Kauffman also posted a video of a man shooting a belt-fed fully automatic machine gun captioned with the words, “when you walk into a synagogue.”

In addition to his calls for violence, Kauffman posted images and messages stating his own desire or willingness to commit violence. On March 6, he wrote, “Shekels wants to genocide Jews and niggers.” That same date he posted an image of himself and wrote, “The last thing ya’ll [sic] kikes will see.” And on March 13, he posted a digitally edited image of his own hand aiming an AR-15 rifle at a Jewish congregation. 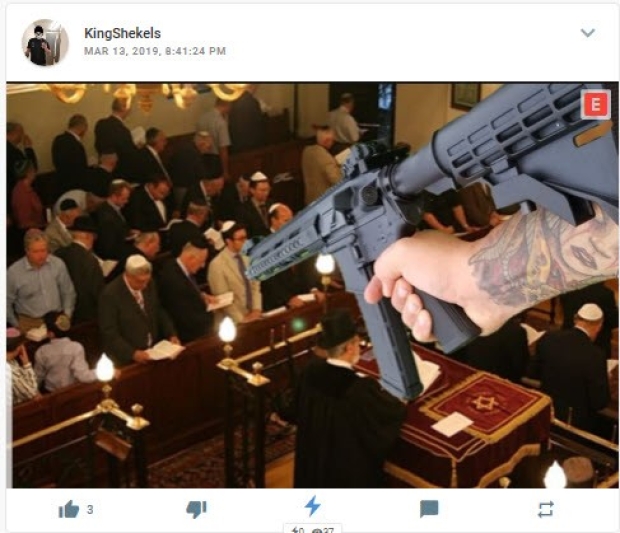 Some of Kauffman’s most disturbing posts feature white supremacist killers. Twenty-six posts were edited videos or memes related to New Zealand mosque attacker Brenton Tarrant. Using video and still shots from Tarrant’s attack, Shekels added music and quips such as, “screw your optics,” “If you don’t think that’s the tightest shit then get out of my face,” “kill streak,” “victory royal,” and “we can’t expect God to do all the work.” He also used images, quotes or references to other white supremacist killers such as Robert Bowers, James Fields, Dylann Roof, Timothy McVeigh and Charles Manson.

Kauffman also posted images that were linked to an anti-Semitic vandalism at a park in Pennsylvania and the defacement of a Chabad Jewish Center in Maryland. Additionally, he posted incriminating images and video of his anti-Semitic stickers, decals and fliers.

The day after the New Zealand mosque attack Kauffman created a new Twitter account using an image of one of Tarrant’s weapons as his cover photo. He then began posting content similar to that found on his Minds.com profile.