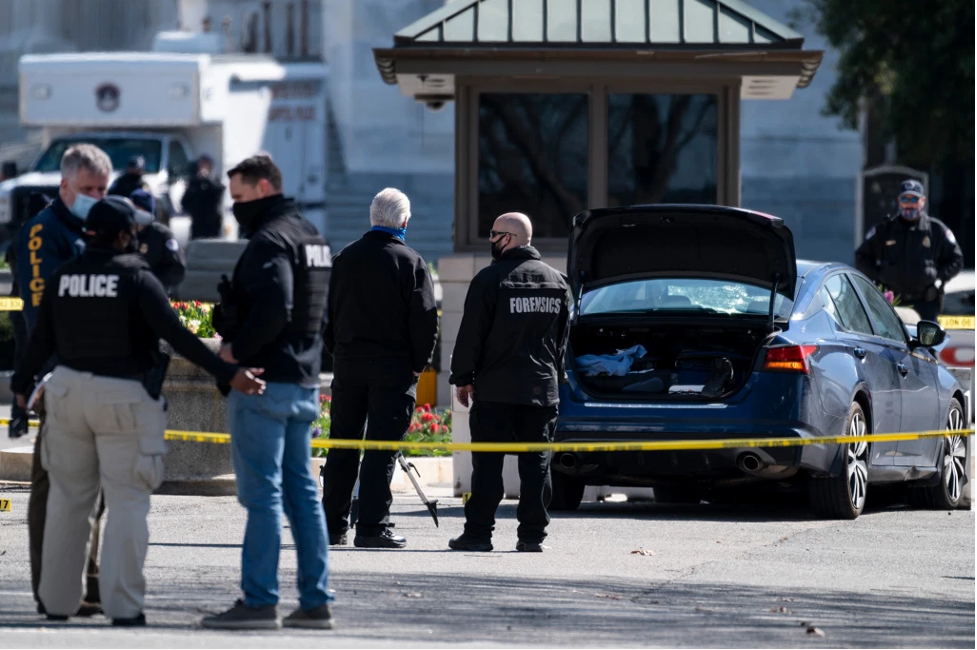 Update: The Nation of Islam released an official statement on April 6 regarding the attack. NOI attempted to distance itself from the violence, but did confirm that Noah Green was previously connected to the Nation, stating that he “may have attended” Saviours’ Day 2020 and that in late summer of 2020 “he started the process to begin his study to become a member [of NOI], but he did not complete the process.” The press release mourned Green as a “brother with such great potential,” with Louis Farrakhan commenting that “had [Green] been blessed to come through the crisis that he was going through, he would have been a star in the mission of the resurrection of our people.”

Noah Ricardo Green was shot and killed by police on April 2, 2021 after he allegedly rammed a car into a barricade at the U.S. Capitol, and then exited his vehicle with a knife, attacking and killing United States Capitol police officer William Evans and wounding another officer.

The motivation for the attack is still under investigation, but according to a report by the Washington Post, many of his family and friends regarded him as “unmoored from reality” and suffering symptoms “that could have been related to drugs or mental illness,” including paranoia and suicidal thoughts.

Family and friends also noted Green’s religious fervor, which had emerged in recent years. Green’s social media posts indicate that he was an ardent follower of the Nation of Islam (NOI) and deeply revered its longtime leader, Louis Farrakhan, a figure of considerable controversy for his rabid and unapologetic hostility to Jews as well as his frequent invocations of wild conspiracy theories.

The Nation of Islam is the oldest Black nationalist organization in the U.S. and a fringe religious group that is not tied to mainstream Muslim sects. NOI has maintained a consistent record of antisemitism and racism since its founding in the 1930s. Throughout his decades-long tenure as the group’s leader, Farrakhan has repeatedly espoused virulent antisemitism, racism and anti-LGBTQ+ bigotry.

While Farrakhan often speaks about serious issues affecting Black Americans, including racism, police brutality, and economic disparities, he often blames Jews for these societal problems, and has invoked wild conspiracy theories that implicate Jewish people and the federal government in plots to subjugate Black Americans..

Despite this record, the NOI has been given a measure of legitimacy by some mainstream figures in the Black community, including elected officials and celebrities, who have chosen to focus on the group's efforts to bolster black self-reliance, while minimizing the group's well-established record of racism, homophobia and antisemitism.

References to NOI and Farrakhan on Green’s social media

While NOI is not known for advocating for violence against the federal government and there is no indication that Green’s attack was motivated by NOI teachings, it is apparent that Green himself was influenced heavily by NOI.

In the weeks leading up to the April 2 attack, Green wrote multiple public Facebook posts about his spiritual journey, NOI teachings and video speeches by Louis Farrakhan. Various aspects of the posts echo common NOI rhetoric and references.

Warnings about the “end times” and an imminent war between God and Satan are central parts of NOI ideology. The “lull before the storm” is a particularly common refrain from NOI leaders, describing the current state of the world and the notion that the fall of the white man and the end of “Satan’s rule” has already begun.

On March 17, Green referenced these “end times” teachings, including specific mention of the “mother wheel,” which is understood within NOI beliefs to be a spaceship that will appear during the apocalypse to destroy America and save righteous Black people. A subsequent post on March 21 linked to a text excerpt about the “lull before the storm” from Elijah Muhammad’s 1973 book, “The Fall of America.” 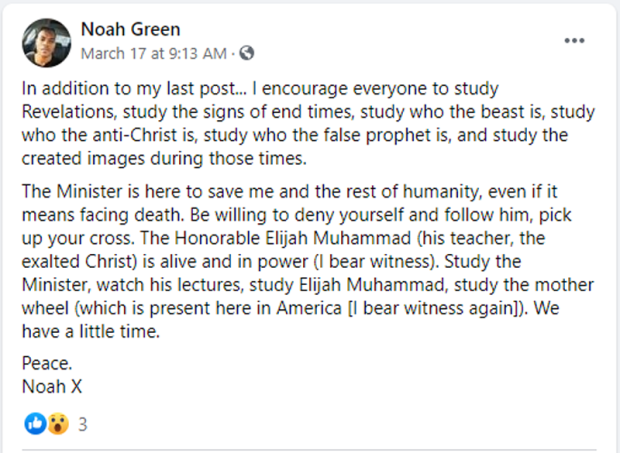 In another lengthy post on March 17, Green repeatedly expressed his deep admiration for Farrakhan and his belief in “Farrakhan as Jesus, the Messiah”—a designation that Farrakhan himself and others within NOI frequently use.

NOI members are encouraged to contribute to the annual Saviours’ Day Gift drive, with fundraising efforts coinciding with the group’s annual Saviours’ Day conference and commemoration of NOI founder W. Fard Muhammad’s birth. On March 17, Green posted an image of a “certificate of completion” for the NOI 2021 Saviours’ Day Gift, which noted that he had raised $1,085. The certificate included an official NOI member ID number, indicating that Green was a registered member of the Nation, though whether he was an active member of any local NOI chapter is unclear. 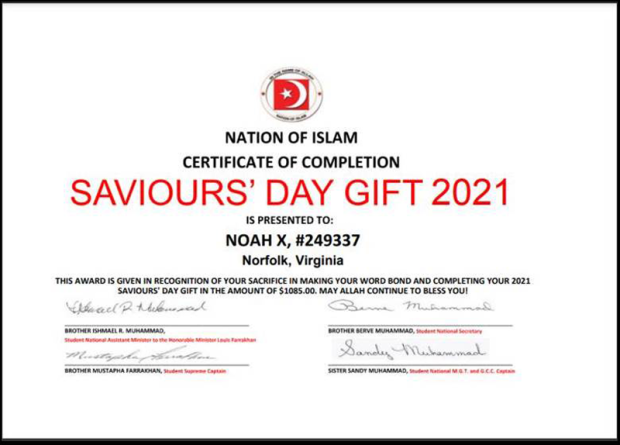 Green also appeared to have adopted the surname “X”—a common NOI practice—at some point in recent years, using the name on his Saviours’ Day 2021 certificate and signing posts as “Brother Noah X” on his Facebook profile. In January 2021, Green filed a petition in Indiana, where he was reportedly living at the time, to legally change his name to Noah Zaeem Muhammad. He failed to appear for his scheduled name change hearing on March 30, only days before the April 2 attack on the Capitol police officers.

Official NOI channels have mostly remained quiet since the attack. Some individual members and affiliated accounts did respond on social media by defending Farrakhan against accusations that he in any way inspired the violence, and in several cases, used the opportunity to promote typical conspiratorial claims about the media or others conspiring against NOI.

Two members of NOI’s Research Group, Demetric Muhammad and Ilia Rashad Muhammad, defended Farrakhan and NOI in the wake of the attack without directly naming Green.

Demetric Muhammad lauded Farrakhan’s role in organizing the Million Man March, which drew hundreds of thousands of Black men to Washington DC for a peaceful demonstration in 1995, commenting that “it is extraordinary that a man so vilified and excoriated by many in the mainstream has no record of being guilty of what his critics ascribe to him. Instead his record is sterling and is an indicator of his universally positive impact in the world.” Ilia Rashad Muhammad similarly referenced the Million Man March, accusing news media of “[trying] to associate the good name of Farrakhan with their evil tricks.”

Both Ilia Rashad Muhammad and the NOI Research Group also retweeted conspiratorial and antisemitic commentary about the attack from notorious Holocaust denier Michael Hoffman, whose work is regularly promoted by the NOI Research Group and who spoke at NOI’s annual Saviours’ Day conference in 2019. Hoffman’s posts alleged that a “cryptocracy” facilitated the attack to frame Farrakhan, with one post reading: “Did the #Cryptocracy choose Good Friday to crucify #LouisFarrakhan by pinning today's attack on the Capitol on the #NationofIslam? FACT: Members of the Nation are forbidden to possess a weapon of any kind. FACT: ‘Noah’ fits the profile of a hypno-patsy.” 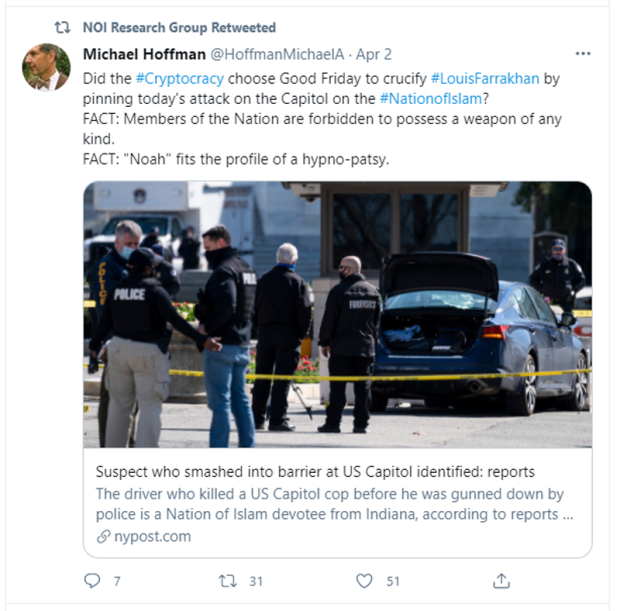 The NOI Research Group retweeted this post and others from Holocaust denier Michael Hoffman, promoting conspiratorial claims about the attack. (source: Twitter screenshot)

Farrakhan himself has not made any public statement about the attack. He did speak publicly less than 24 hours after the incident in an address to the “National Black Leadership Summit II” on April 3, though his remarks—which were pre-recorded on an undetermined date—did not reference the attack.