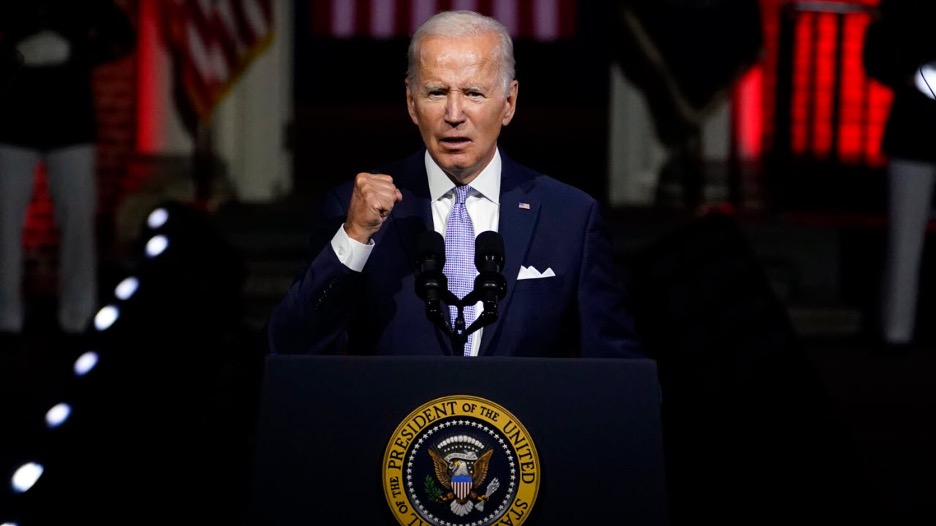 On September 1, 2022, President Biden delivered a speech about our nation being at a dangerous “inflection point.” He described extremist threats to democracy posed by what he called “MAGA Republicans,” arguing that they “do not respect the constitution.” 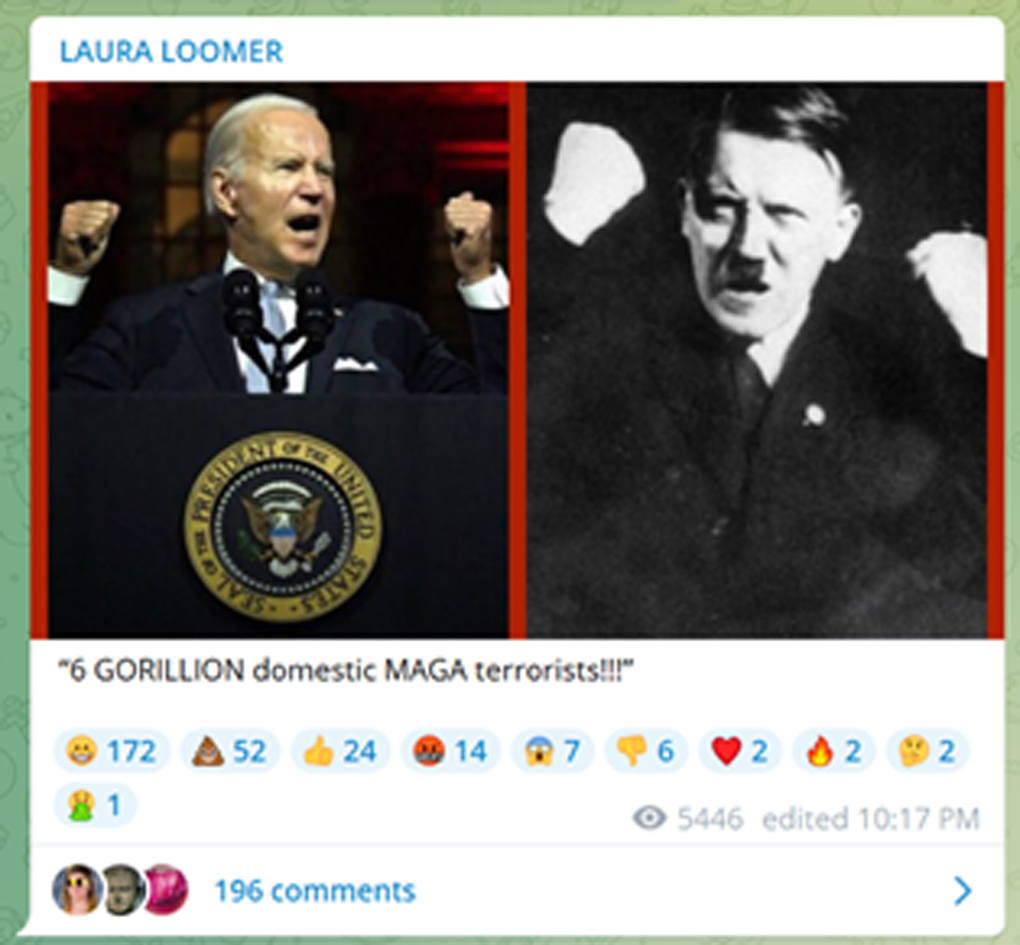 On Twitter, both Sen. Josh Hawley (R-MO) and U.S. Rep. Marjorie Taylor Greene (R-GA) suggested that Biden made threats against or declared war on “half the country.” 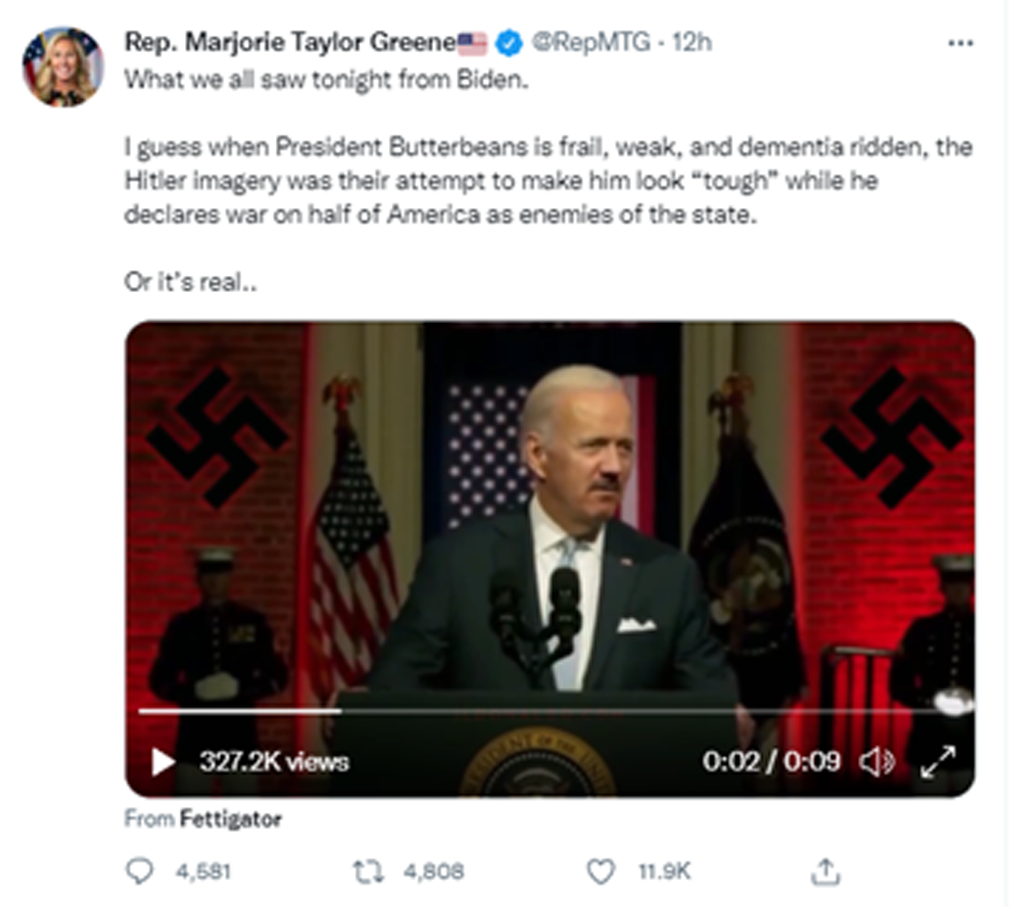 Trump echoed this on Telegram, saying that Biden “threatened America…with the possible use of military force.” In fact, Biden never used the words “military” or “martial law,” per the transcript, nor did he ever suggest using “force.”

ANTISEMITIC RESPONSES
Many who opposed Biden’s speech argued that Biden is doing to “MAGA Republicans” what “Hitler did to Jews,” a comparison that minimizes the brutal reality of the Nazi party and the Holocaust. Other posts were more blatantly antisemitic, including a Telegram comment from white supremacist influencer Eric Striker, who accused Biden’s “Jewish” administration of leading the “domestic war on whites.” On 4chan, multiple users claimed Biden was just following the orders of his “jewish [sic] masters.”

CONSPIRATORIAL RESPONSES
Some conspiracy theorists, including a range of QAnon influencers, inexplicably argued the speech actually helped their cause because it proved the “White Hats are in complete control” (referring to the QAnon term for people working inside the government to thwart the Deep State), that it was somehow good for their optics and that they are “winning” in their effort to awaken the nation. 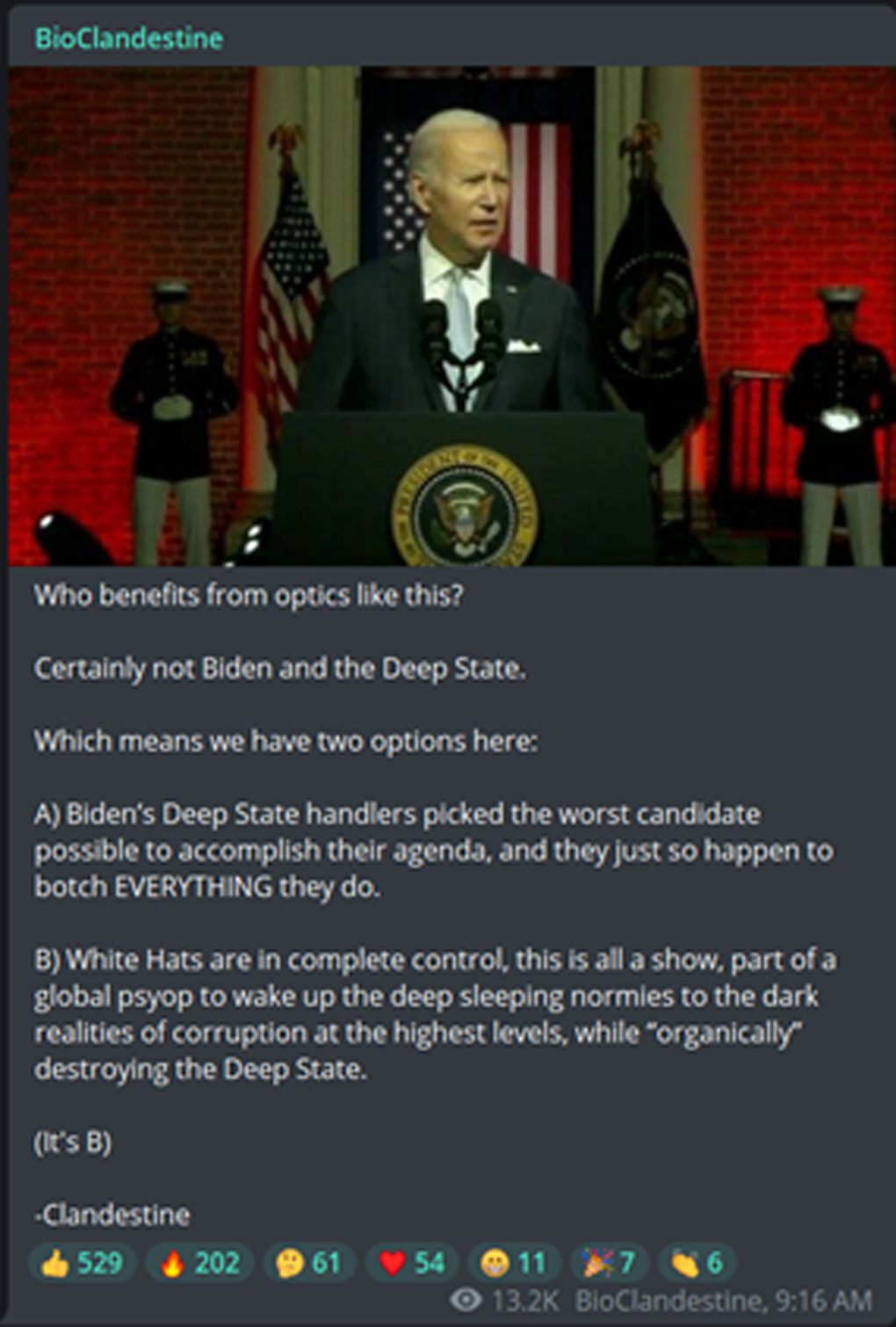 QAnon John shared a screenshot from Twitter, noting that Biden’s speech might have been scheduled for September 1 because World War II started on September 1, 1939. 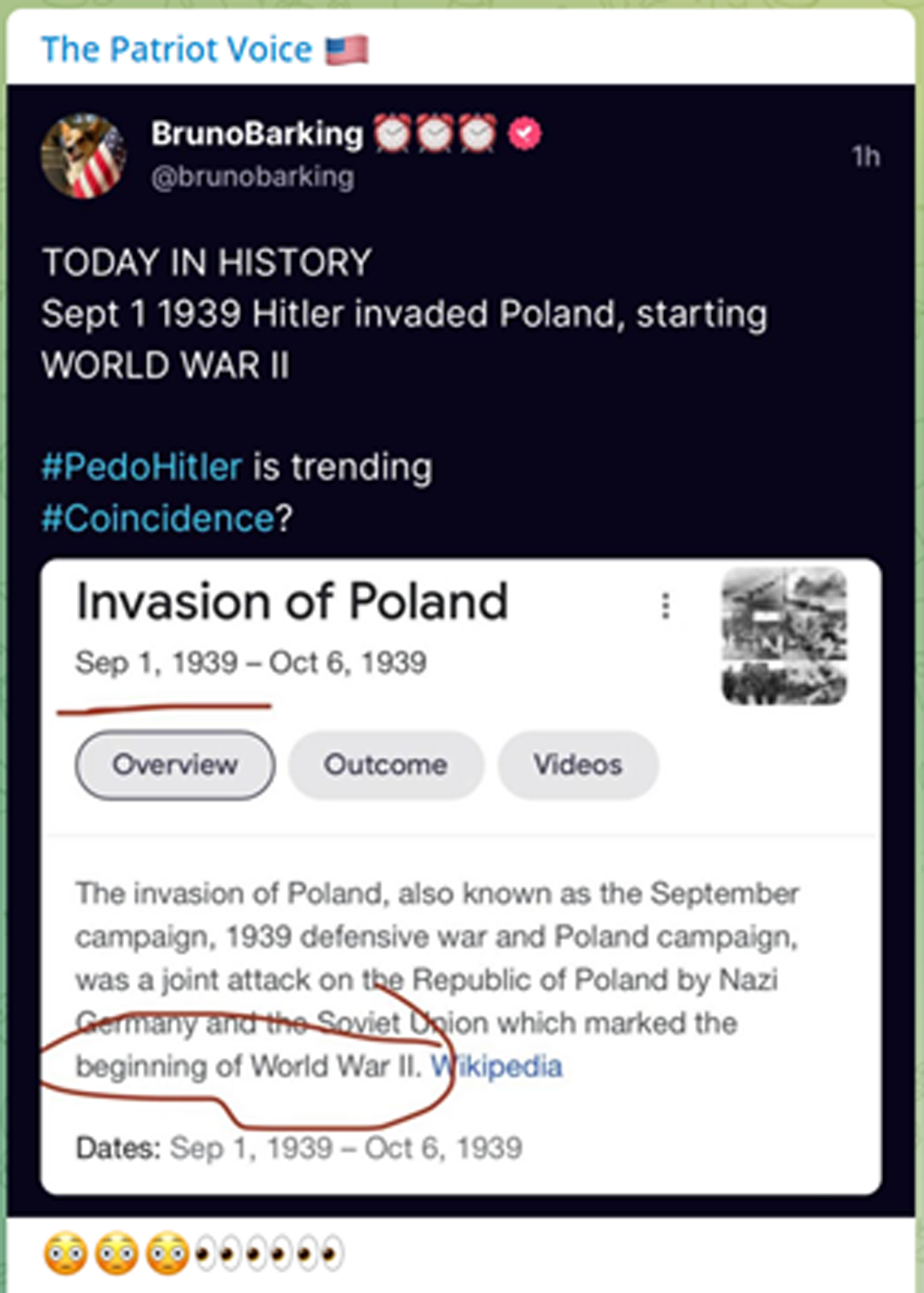 EXTREMIST GROUP RESPONSES
Some accelerationist users on Telegram argued the speech could benefit them, as a civil war would advance societal collapse and because efforts to prevent Trump from running for office could be a “breaking point” on the path to that collapse. Other accelerationists theorized that the speech was a strategy by the “Zionist Occupied Government” (ZOG) to sow division and to purposely radicalize more people. 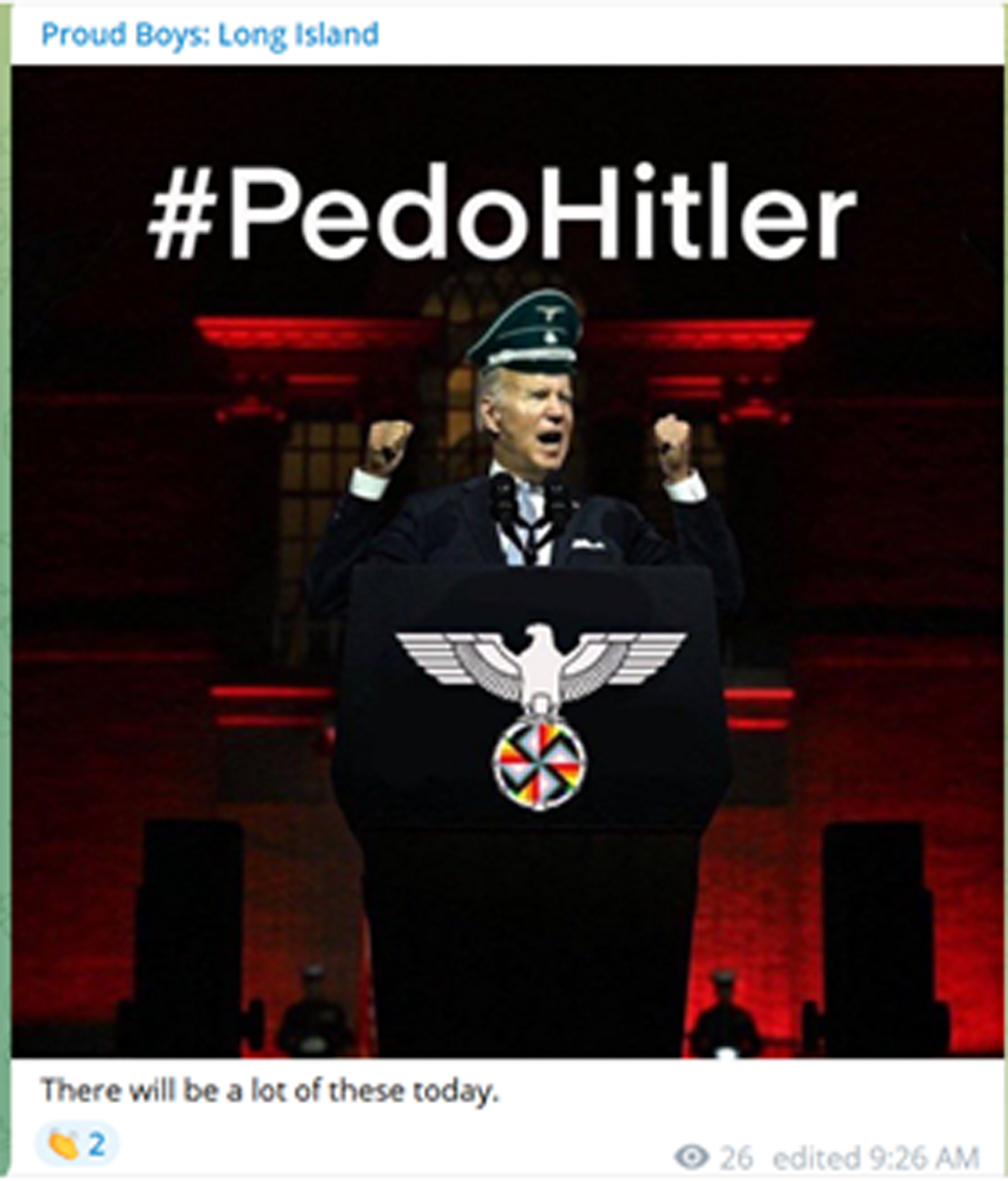 Disclaimer: As a 501c3 organization, ADL takes no position on behalf of or in opposition to any candidate for office.