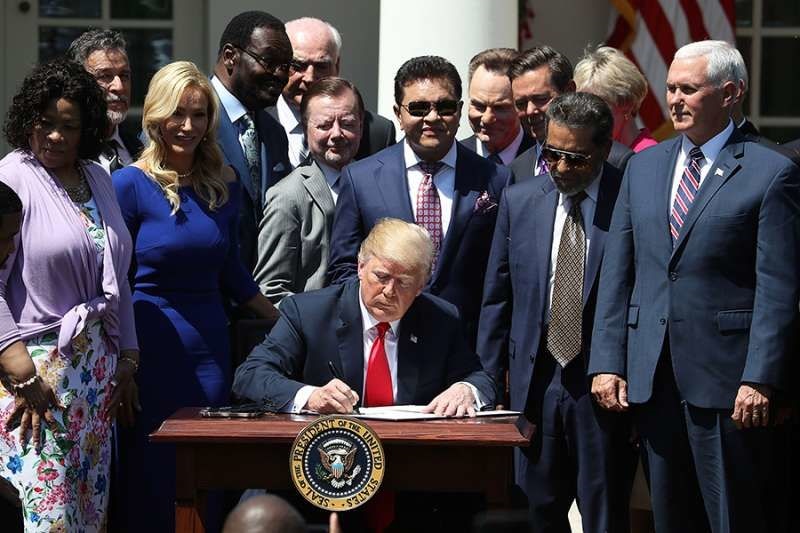 Last month, the Trump Administration proposed sweeping changes to federal rules governing taxpayer-funded social services, changes that threaten the religious freedom of the most vulnerable in our nation.

Over 20 years ago, the federal government made a sea change in how it provided taxpayer-funded social services by allowing houses of worship to compete for grants and contracts through a program called the “Faith-Based Initiative.”

This change created a serious risk of the neediest Americans being proselytized or compelled to engage in worship contrary to their own faith in order to receive services from taxpayer-funded social service programs like food pantries or homeless shelters. It also tacitly permitted houses of worship and other religious providers of social services to refuse hiring people outside of their faith, resulting in Americans potentially being rejected from jobs funded by their own tax dollars.

For decades prior to the launch of the Faith-Based Initiative, the federal government entered into contracts with separately incorporated, religiously affiliated groups, like Catholic Charities, Jewish Federations, and Lutheran Social Services, which required these faith-based organizations to follow strong constitutional safeguards guarding against the entanglement of the federal government with religion and to protect the freedom of religion of those who were served by these groups.  Those successful partnerships had a track record of providing critical social services to those in need largely without issues of unwanted proselytizing or discrimination.

The Faith-Based Initiative’s first rules intended to protect recipients of government-funded social services against religious coercion and discrimination were wholly inadequate.  Just four years ago, the Obama Administration issued new rules that provided robust religious freedom and anti-discrimination protections to social service beneficiaries. They were based on a consensus reached among leaders with differing views on the Initiative.  However, the new proposed rules just issued by nine federal agencies revoke many of these essential safeguards.

The rules currently in place protect recipients of taxpayer-funded social services from houses of worship and other religious institutions in three important ways.  The first two safeguards apply to social services directly funded by contracts or grants with the federal government, and the third applies to services indirectly funded through federal vouchers or certificates.

Currently, directly funded religious social service providers are required to notify beneficiaries of their religious freedom rights, including (1) they can choose to receive services from an alternative religious or secular provider; (2) they cannot be compelled to  participate in worship or other religious activities; (3) they cannot be denied services based on personal religious beliefs; and (4) they must be informed on how to report a violation of these rights.  To ensure these rights, the rules also require religious providers to make reasonable efforts to refer a beneficiary to an alternative provider with which the person is comfortable – whether religious or secular.

By striking these rules and allowing houses of worship and other religious organizations to withhold important information, the Administration is making it much less likely that most people who are in critical need of food, shelter, counseling or other services will be aware of their rights.  The consequence is that many beneficiaries will feel compelled to receive services from a religious institution whose faith is different from or even contrary to theirs.  They also may believe, inaccurately, that attending worship services or other religious activities is a requirement for obtaining social services.  If a religious provider denies services to a person because of their religious beliefs, the individual seeking the services may believe there is no recourse.  And for beneficiaries who are aware of their rights, the new rules make it much harder for them to secure services from an alternative provider.

Additionally, under the current rules, religious institutions that are indirectly funded by vouchers or certificates can make participating in worship and other religious activities a part of the services they provide, but the federal government must ensure that “adequate secular provider[s]” of the same kind of services are available to beneficiaries.  The proposed rules strike that requirement, increasing the likelihood that beneficiaries will have to choose between receiving critical services or being true to their religious beliefs.

Part of the rationale for the original Faith-Based Initiative was the need to “level the playing field” for religious and secular groups in competing for federal social service funding.  Yet, the proposed new rules appear to do away with this principle.  These proposed rules make it possible for houses of worship citing religious reasons to opt out of requirements that remain strictly applicable to secular providers.  Not only is this unfair, it could violate constitutional prohibitions on government advancement of religion.

The proposed rules also plainly sanction discrimination in publicly funded jobs.   While the current rules are silent on this issue, if the new proposals are adopted, a religious provider could post a help wanted ad saying, for example, “Catholics, Jews, Mormons or Muslims need not apply.”   Discrimination in taxpayer-funded jobs is completely contrary to America’s foundational principle of equality and raises serious constitutional issues as well.

Vulnerable Americans, who are least able to go to court to vindicate their legal and constitutional rights, must be able to receive federal benefits without religious coercion, discrimination or favoritism.  Likewise, taxpayer-funded jobs must be open to all.  Regrettably, the proposed rules violate constitutionally mandated separation of church and state, and equal protection.  They are antithetical to the First Amendment’s guarantee of free exercise of religion on which the proposed rules are ostensibly justified, and indeed a major step backwards for individual religious liberty.

The Administration should withdraw these proposals and, instead, work to strengthen the current rules to ensure religious freedom for our nation’s most needy.