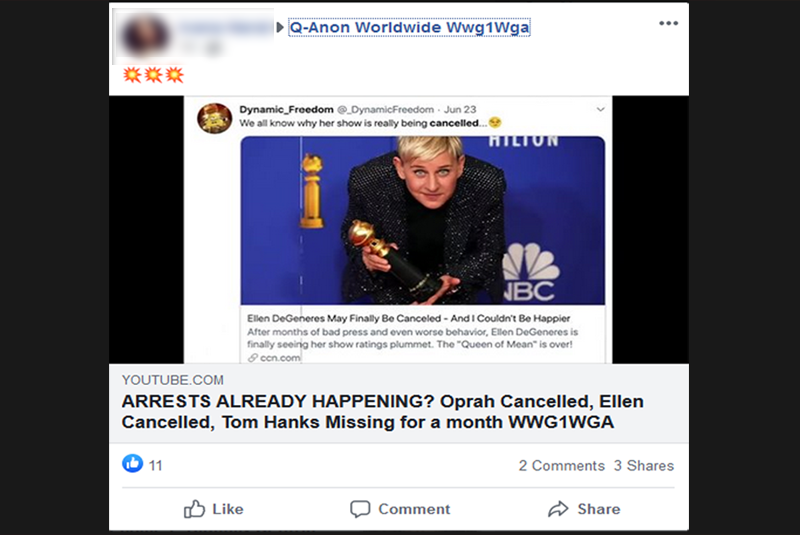 As Facebook continues to grapple with hate speech and violent extremism across the platform, QAnon conspiracy theorists are using public and private Facebook pages and groups to spread disinformation, racism, and thinly veiled incitement to violence.

QAnon, the wide-reaching conspiracy theory popular among a range of right-wing extremists and supporters of President Trump, follows an anonymous personality “Q.” Followers of Q believe a pedophiliac global elite—referred to as “The Deep State” or “The Cabal”—control world governments, the banking system, the Catholic Church, the agricultural and pharmaceutical industries, the media and the entertainment industry in order to keep people poor, ignorant and enslaved. According to the theory, President Trump will bring about justice by ousting this global elite.

This conspiracy is estimated to have a Facebook audience of millions of users. While ADL does not believe that all QAnon adherents are inherently extremists, the public proliferation of these conspiracy theories is dangerous. To date, QAnon followers have been linked to multiple instances of real-world criminality in the name of the conspiracy, including murder, vandalism, arson, kidnapping, terrorism, and assault with a dangerous weapon (firearms). In a 2019 bulletin that warned of the danger of conspiracy theories like QAnon, the FBI wrote, “it is logical to assume that more extremist-minded individuals will be exposed to potentially harmful conspiracy theories, accept ones that are favorable to their views, and possibly carry out criminal or violent actions.”

It is the FBI’s assessment that “significant efforts by major social media companies and websites to remove, regulate, or counter potentially harmful conspiratorial content” might change these theories’ potentially harmful impact. Earlier this year, Facebook removed a small fraction of QAnon groups and users, calling it part of a “coordinated inauthentic behavior” campaign in advance of the 2020 elections. However, these efforts appear to have focused on groups and individuals who deliberately misrepresented their identity, rather than targeting the potentially dangerous disinformation these users spread. In early August 2020, Facebook announced it removed another large QAnon public group, citing “bullying and harassment, hate speech, and false information that could lead to harm.”

Despite these limited efforts, a basic Facebook search in July 2020 still returned numerous active pages and groups dedicated to QAnon. In its investigation of QAnon’s spread across the platform, ADL’s Center on Extremism analyzed 54 different Facebook groups and pages that were active in early July 2020. Taken together these groups and pages had an aggregate usership/following of almost 1.5 million users. This is not to say that there are 1.5 million QAnon accounts on Facebook, as users often belong to multiple groups, rather that, when combined, these groups reach a wide audience.

Many of the groups are dedicated to the most popular conspiracy theories QAnon adherents believe, such as “Pizzagate” and “Pedogate.” Pizzagate, the belief that Hillary Clinton and high-ranking Democratic Party officials were running a human trafficking, ritual murder, and child sex ring out of a Washington, D.C. pizza shop, laid much of the foundational ideology for QAnon. Pedogate focuses on the broader child trafficking and pedophilia aspects of the QAnon conspiracy.

Some of the most popular groups/pages we looked at include:

The following examination focuses on three main themes, each of which are pivotal to the QAnon ideology. This is only a sampling of QAnon’s extensive presence on Facebook.

The Clintons and Democratic Elites

Core to the QAnon ideology is the belief in the existence of a politically connected international sex trafficking ring. A popular variation of this belief is the allegation that Democratic politicians—particularly the Clintons—and donors are facilitating pedophilia on a large scale either through child trafficking or by enacting laws designed to enable abuse. To this day, many QAnon believers maintain that the Clintons continue to actively participate in the murder and abuse of children.

Across QAnon Facebook groups, posts and memes about this alleged pedophilia ring and the Clintons’ affiliation are popular. They range from accusations of child abuse and slavery to child sacrifices to extrapolating that legislative initiatives by Democrats are meant to enable such abuse. 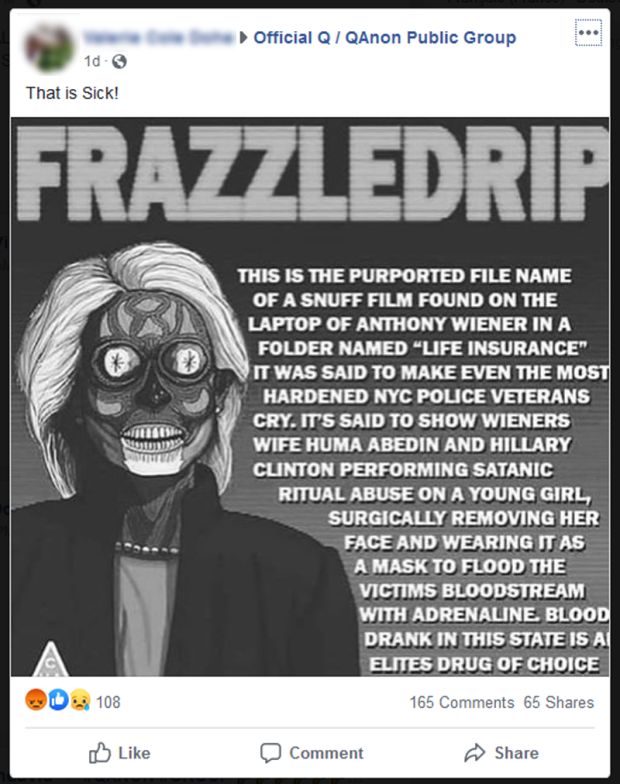 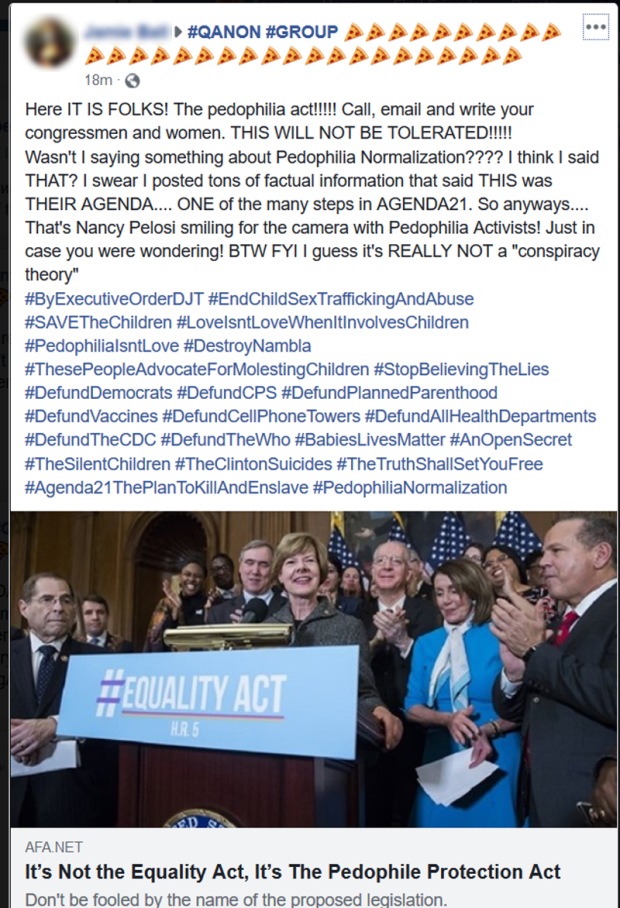 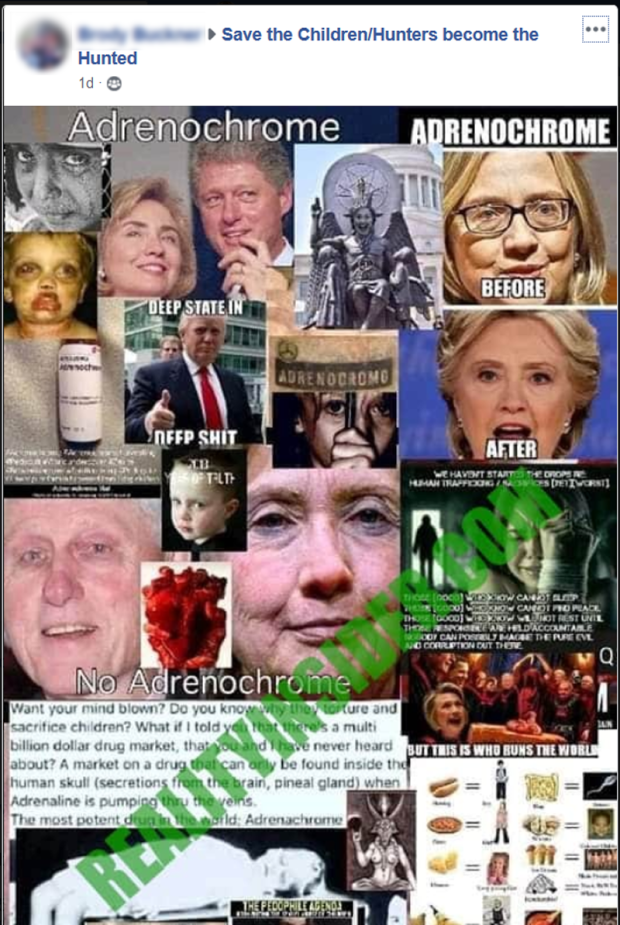 “Save the Children/Hunters become the Hunted,” posted 7/17/2020 - claims that the Clintons harvest the adrenal glands of children in order to stay young. 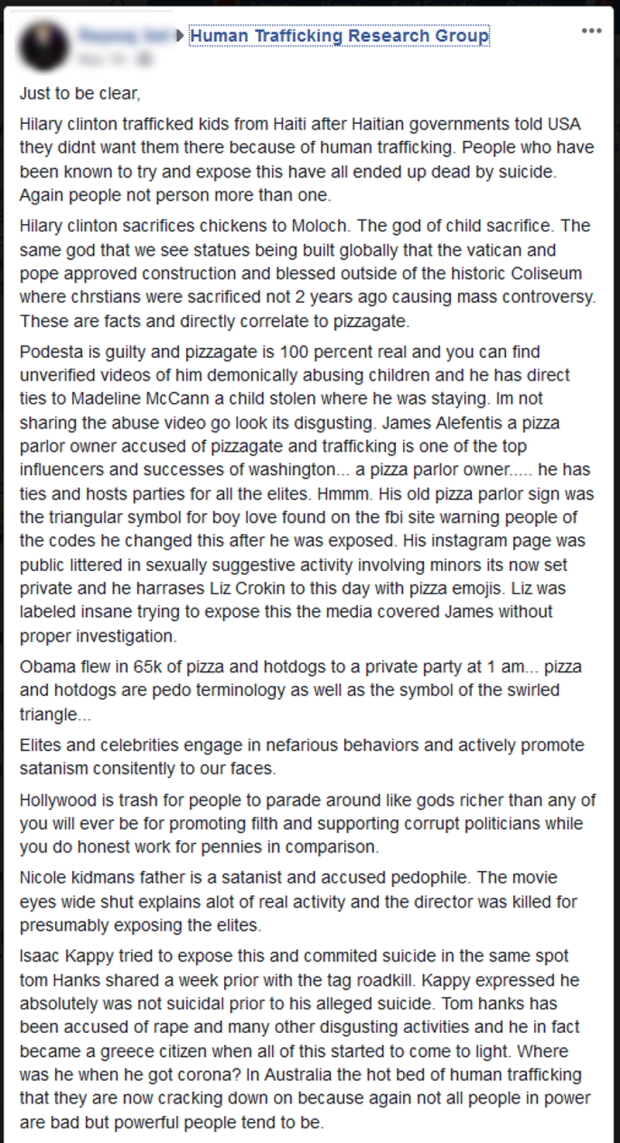 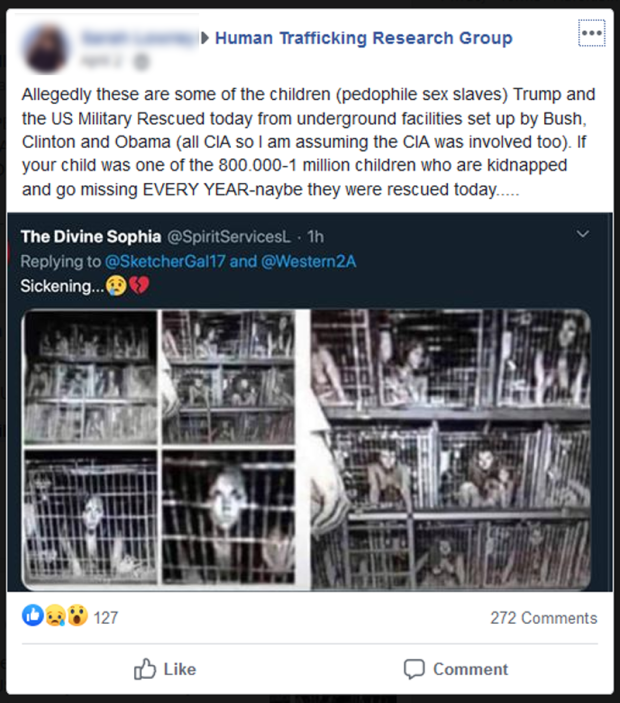 The Globalists and the New World Order

Central to QAnon is the idea that an international cabal of elites control the world and are plotting to enslave Americans. According to QAnon, these efforts take many forms, but most often come disguised as international treaties or supranational organizations, which Q adherents believe erode national sovereignty. This obsession with a New World Order and shadowy globalists is common within right-wing extremist movements, including white supremacist circles. Recently, the international efforts to combat the Coronavirus pandemic have fueled QAnon conspiracy theorists on Facebook, as they cite governments’ and international organizations’ virus responses as an excuse to induce the New World Order. 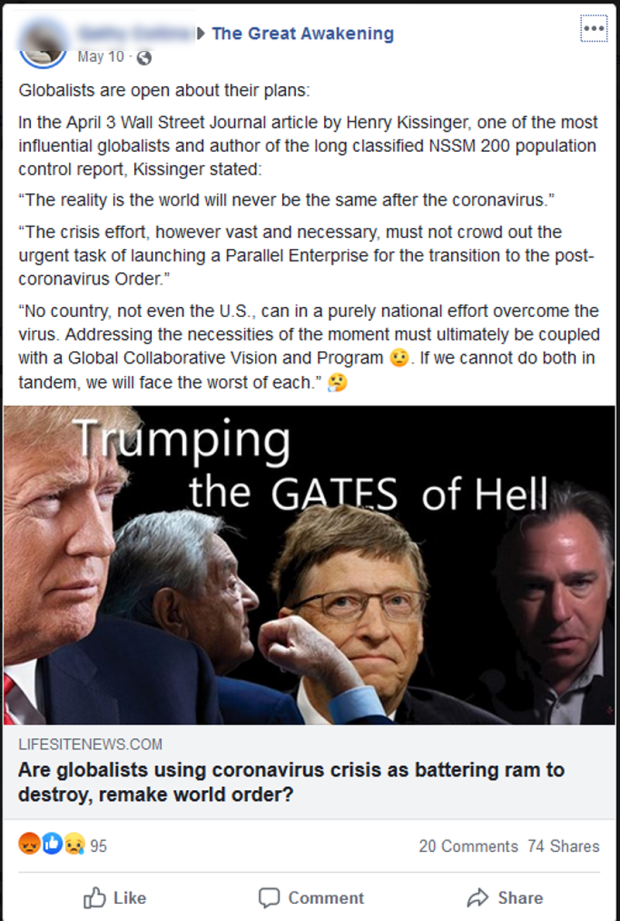 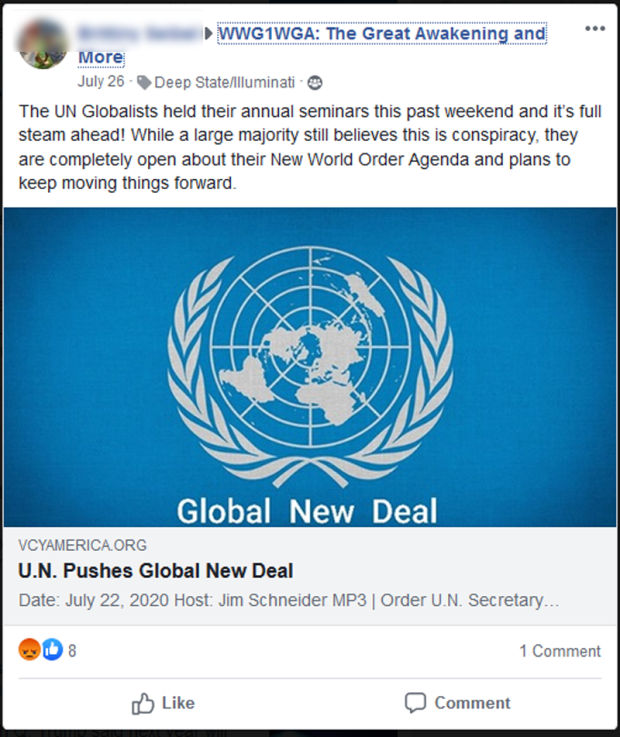 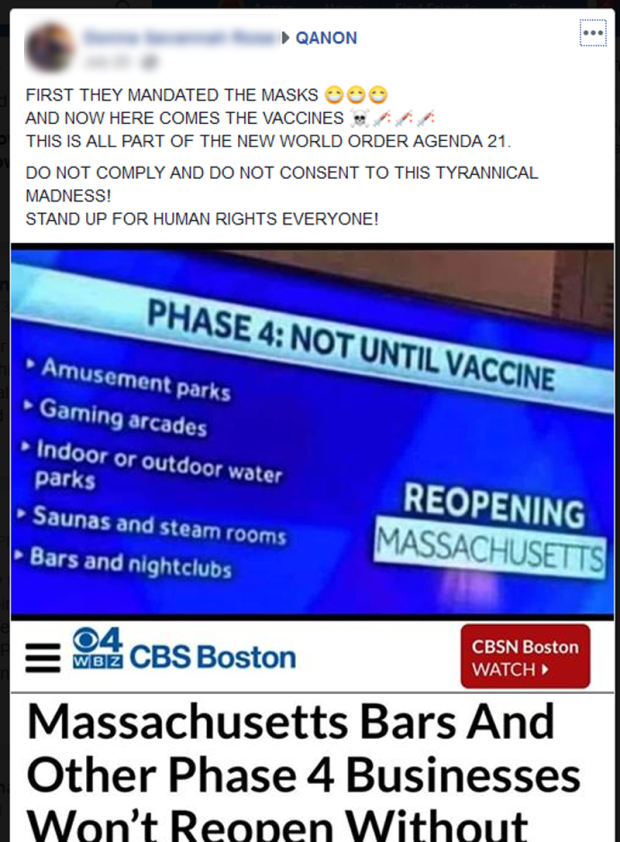 Celebrities, particularly those who identify as liberal, are favored targets for QAnon conspiracy theorists. One vein of QAnon belief holds that certain actors and entertainers are in league with the ‘Deep State’ in order to participate in pedophile rituals. Posts in these groups serve to expose such celebrities and to highlight the supposed breadth of the pedophilia ring. Many QAnon believers allege that Oprah Winfrey is a key figure in this alleged vast sex trafficking ring. 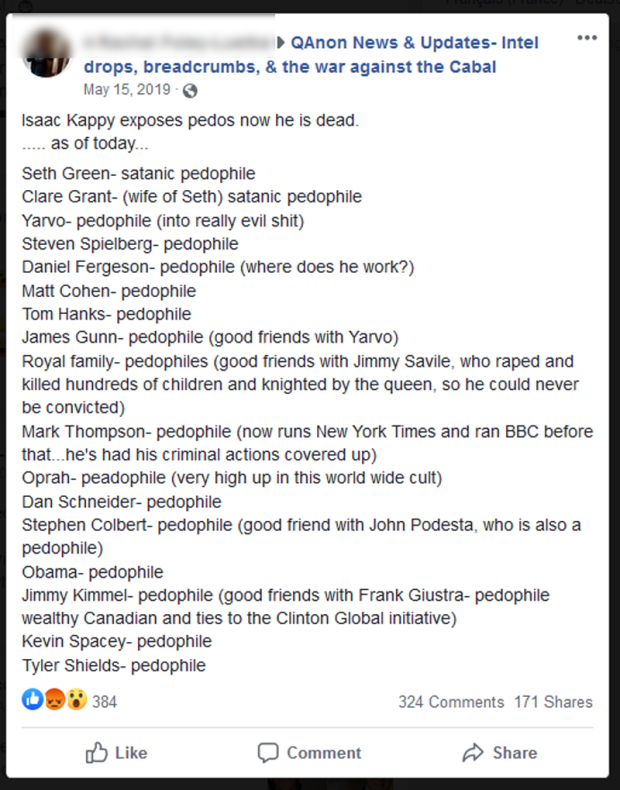 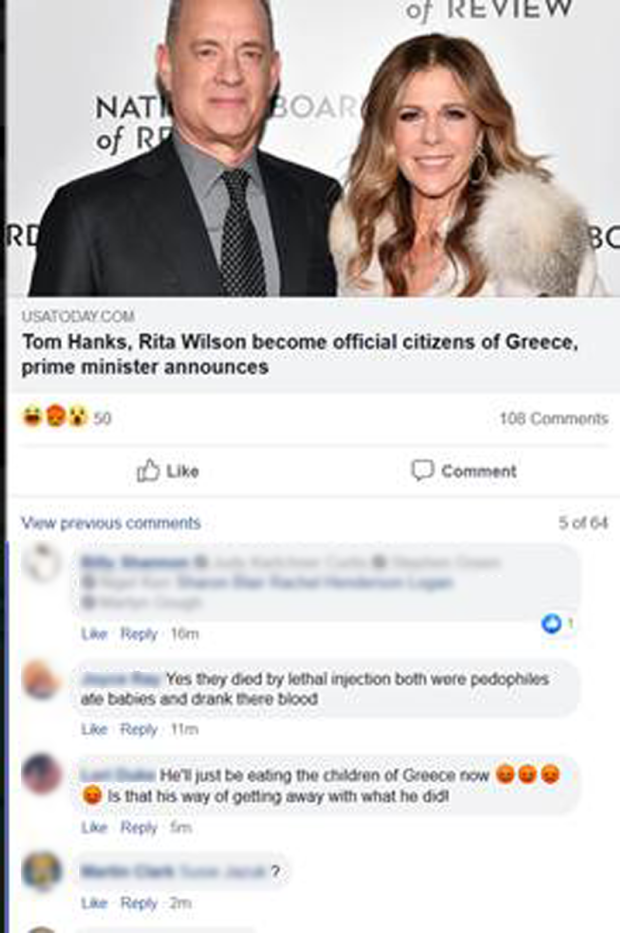 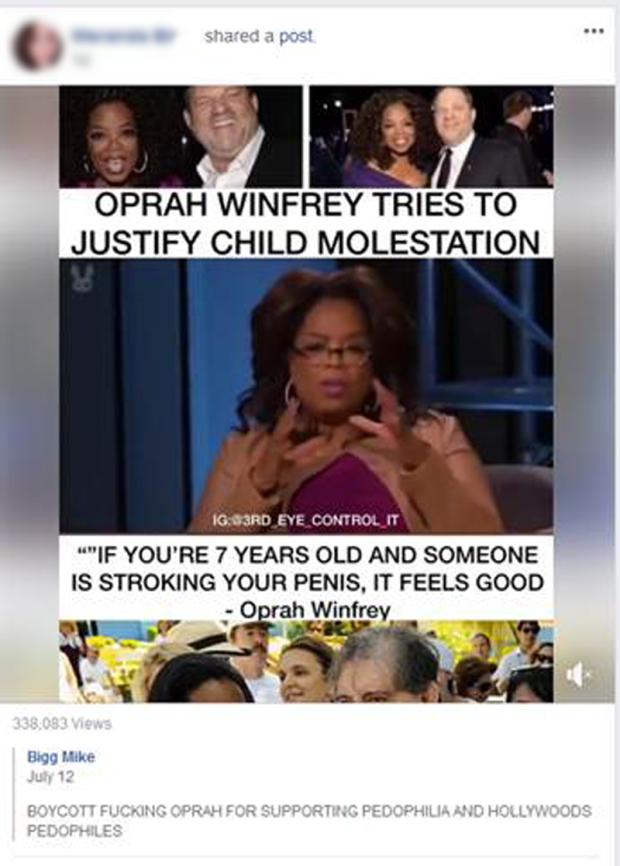 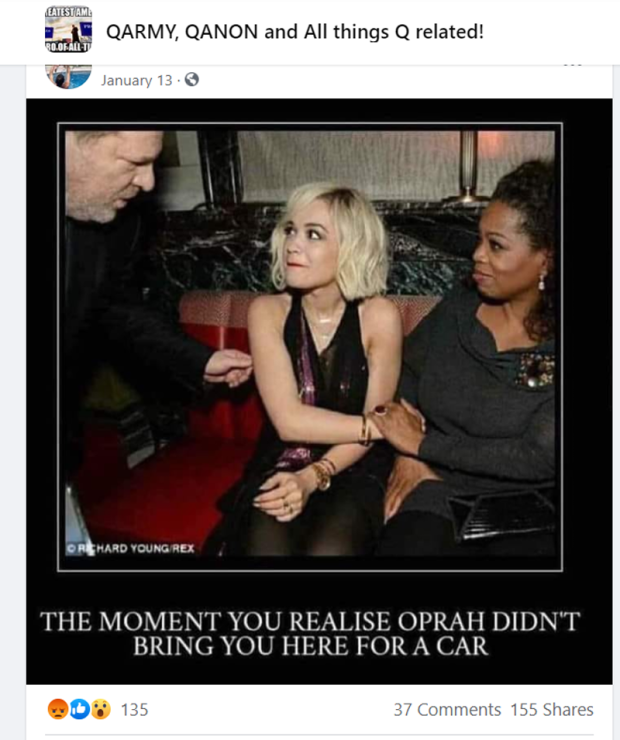 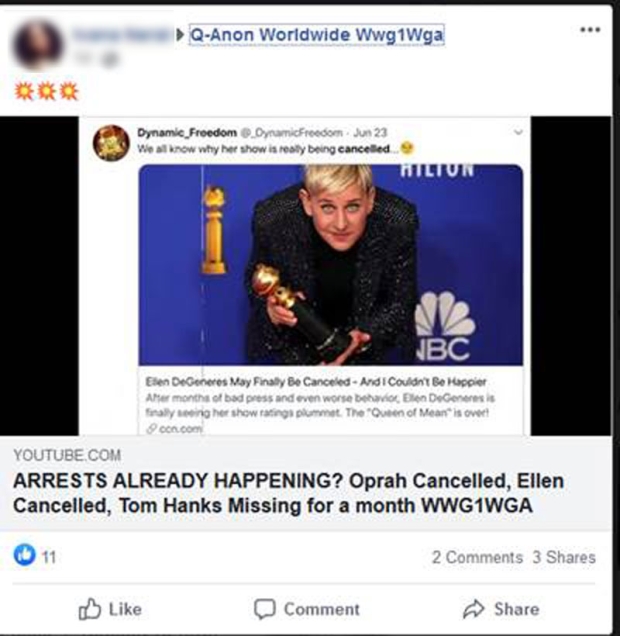