Identity Evropa's latest efforts at targeting college campuses include fliers that promote a range of racist books and propaganda tracts. The white supremacist group has been actively targeting colleges and universities across the United States.

In the first weeks of September, Identity Evropa fliers were found on campuses in California, Long Beach Community College and Santa Rosa Junior College, as well as the University of Illinois at Urbana-Champaign. The fliers were accompanied by materials advertising books published by Arktos Media. 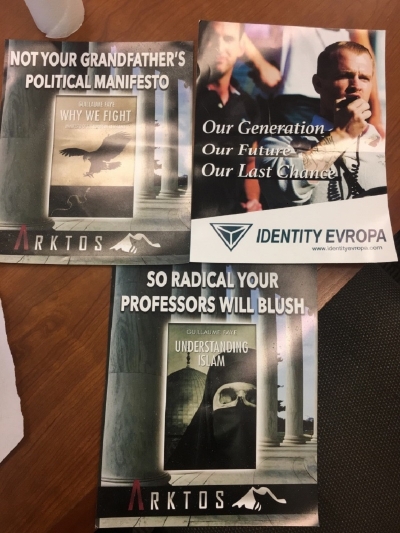 Created in 2010, Arktos Media is a small publishing company that features books by white nationalists and translates European Identitarian works into English.

The company is led by Daniel Friberg, a Swedish businessman and white supremacist who co-founded AltRight.com with Richard Spencer.

Arktos announced their collaboration with Identity Evropa via Facebook in July 2017.

The fliers, distributed in early September, promote books by Guillaume Faye, a French political commentator, writer, and theorist of the New Right in the 1970-80’s.

One of the books, Why We Fight, is a manifesto in the form of a dictionary for so-called “Western Identitarians,” and a call for participants in a so-called European network of resistance.

A second book, Understanding Islam, is extremely critical of Islam, and argues that the religion is incompatible with democracy, secularism, individual freedom and the Western world.

The third book, Archeofuturism, originally published in 1998, critiques both the European New Right and western liberalism.

Identity Evropa materials distributed at San Diego State University on September 4 were accompanied by a revised copy of the racist pamphlet, “The Color of Crime.” Originally written in 1999 by Jared Taylor, the piece falsely claims that black people are more genetically prone to criminal activity than their white counterparts. 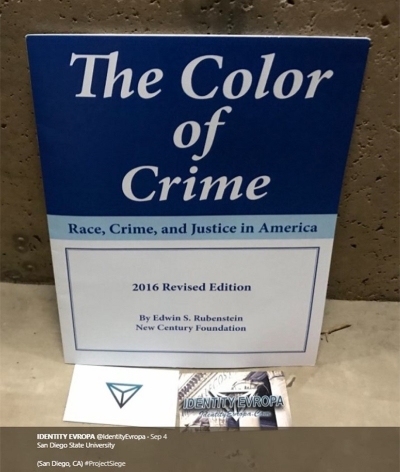 Jared Taylor is the founder of The New Century Foundation, a white supremacist organization known primarily for its racist online journal, American Renaissance.

Identity Evropa’s continued distribution of propaganda is part of the group’s “Project Siege” initiative, designed to create a space for their ideas at universities across the country and defined as “the beginning of a long-term cultural war of attrition against academia’s cultural Marxist narrative.”