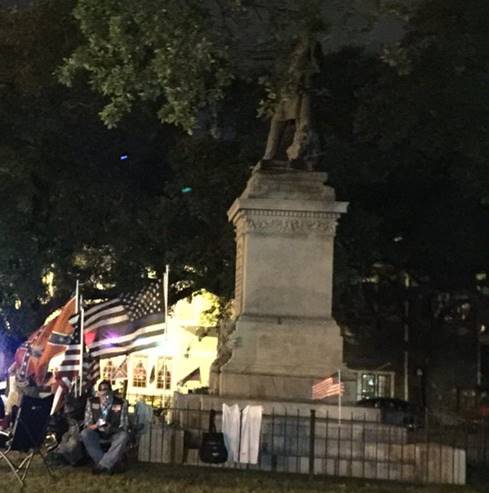 White supremacists are gearing up for what they are calling the “Battle of New Orleans,” on May 7th.  They plan to confront left-wing and anti-fascist (antifa) groups that have been calling for the removal of more Confederate monuments in New Orleans after the mayor of the city removed the Liberty Place monument on April 24th.

Even in the South, Confederate monuments and flags have become more controversial and a growing body of opinion is uncomfortable with reminders of the darker aspects of the South’s past.

Since the removal of the Liberty Place monument, which commemorated a violent encounter between the white supremacist White League and supporters of Reconstruction in Louisiana, there has been a battle of words and some actual skirmishes between opponents and proponents of the Confederate monuments.

An organization called Take Em’ Down NOLA called for a march on May 7th in New Orleans to “bury white supremacy” and ask the mayor and council of New Orleans to publicly celebrate the removal of the remaining Confederate monuments scheduled to be removed.

The efforts to remove the monuments have been met with a strong opposition by white supremacists from both the New Orleans area and from other parts of the country.

Another prominent white supremacist, Alabaman Brad Griffin, aka Hunter Wallace, used his website to encourage his followers to come to New Orleans “to defend Confederate heritage activists against feral antifas and support our historic monuments and Southern identity.” Shaun Winkler from the International Keystone Knights is also planning to go to New Orleans.

As a result of these efforts, New Orleans is becoming a nexus for all sorts of extremists. Kyle Chapman is coming to New Orleans all the way from California.  Known as “Based Stickman,” he became a hero on the white supremacist alt right after he confronted antifa demonstrators in Berkeley armed with a stick and helmet.

He has called for members of his recently formed group, Fraternal Order of the Alt Knights, to show up to battle left-wing groups. He also asked the Proud Boys, another right-wing group, to take part in the fight.

Chapman also asked groups involved in the militia movement such as the Oath Keepers and Three Percenters to come to New Orleans.  Some members of those groups have indicated that they will be there.