What’s the easiest way to spot a white supremacist?

The answer used to be pretty easy: You look for Klan robes or a swastika tattoo.

But the recent rise of the clean-cut, besuited Richard Spencer and the alt-right has challenged these conventions, and parallels a movement within white supremacist circles to re-brand their cause – eliminating easily identifiable symbols in favor of a new, “kinder, gentler” image, an attempt to make their message more palatable to the average white person.

Spencer, who is credited with coining the phrase “alt-right,” is the movement’s current figurehead. There’s no real leadership in the alt-right, largely because you can’t lead a loose network of people and groups who are united only by their interest in promoting white identity and rejecting mainstream conservatism in favor of politics that embrace implicit racism or white supremacy and anti-Semitism. The alt-right’s ranks include internet trolls, misogynists – anyone who believes in and endorses white identity and white nationalism.

The purported goal of the alt-right is to bring white supremacist ideology into mainstream conservatism – to make an ideology of hatred more acceptable to “normies,” the alt-right’s term for non-extremist white people. This means mainstreaming everything from a group’s wardrobe to symbols and signs. The “boring is better” approach is evidenced by the logo for The National Policy Institute, Spencer’s “educational” foundation:

Spencer’s current high profile and his ubiquitous media presence suggest this approach may be working. Another sign: Other white supremacist groups are following suit.

Everything Old is New Again

It’s worth noting that this is not a new phenomenon.

Former Ku Klux Klan leader David Duke underwent a similar makeover in the 1980s, when he ditched his Klan robes in favor of a suit, and started using less overtly racist language. His hateful views never faltered – the changes were all on the surface. Duke’s sartorial transformation was mirrored in the Klan at large – while some members continue to wear the traditional robes, others have adopted a more mainstream appearance, sometimes mixing in paramilitary regalia, and using more subtle symbols to declare their affiliation.

In the 1990s, the Council of Conservative Citizens, a white supremacist group that emerged out of Southern racist white citizens’ councils of the 1950s and ‘60s, tried to present itself as a conservative organization by hosting established politicians, including Trent Lott and Bob Barr, at its meetings. They were not successful, as the media exposed the group for what it was.

The 1990s also saw the emergence of Jared Taylor, the forerunner of the “suit and tie racists,” who couched their blatantly white supremacist ideologies in pseudo-scientific theories and seemingly inoffensive language. Taylor’s American Renaissance has one of the blandest logos around:

Recently, perhaps taking note of Spencer’s success in the media and the alt-right’s efforts to “normalize,” other white supremacist groups have undertaken similar re-branding efforts.

The National Socialist Movement (NSM) has been taking baby steps towards mainstreaming their image; in 2008, members’ uniforms went from brown (modeled after the Nazi’s paramilitary wing) to black. And in 2016, the group replaced their swastika logo with the more innocuous Othala rune, an ancient Nordic symbol also used by pagans. This change was pitched on the NSM website as the best way to “launch our Party into the mainstream,” and members were assured:  “Your Party Platform remains the same, your Party remains unchanged, it is a cosmetic overhaul only.”

In early 2016, a group of existing white supremacist groups formed a new coalition called the Aryan Nationalist Alliance (ANA). After NSM dropped the swastika from their logo, the ANA, not to be outdone in the quest for mainstream acceptance, renamed themselves the Nationalist Front. They also changed their own logo, eliminating the Celtic cross, wolfs angels and two white arms in favor of “NF” surrounded by a circle of stars, with the words “Iunctus Stamus” (“united we stand”) underneath. Not everything has changed; the group’s color palette remains the red, black and white traditionally associated with national socialism.

Some newer white supremacist groups, including Identity Evropa and the Traditionalist Worker Party, are attempting to fly under the radar by choosing innocuous sounding names and seemingly benign logos.

The changes have been enthusiastically received in some white supremacist circles. Matthew Heimbach, one of the leaders of the Traditionalist Worker Party, Tweeted his support for a new, more inclusive version of white nationalism: 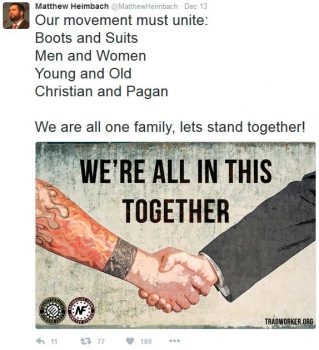 Meanwhile, Sabrina Burnside, a Pennsylvania member of the NSM, had harsh words for anyone who argued with the recent modifications:  “If your are so unloyal [sic] that you turn your backs on your comrades [sic] over a cosmetic change, you need to be thrown in the same dark box with all the filthy kikes.”

Not everyone is on board with the re-branding efforts. Klan member Shaun Winkler is not happy about any of it, and expressed his outrage on VK.com: “What a movement we have became [sic]…klansmen scared to say nigger and National Socialist scared to openly fly a swastika all for the sake to compromise with mainstream society…since when did we as a pro white movement give a shit what society thinks??”

Neo-Nazi Steve “Bowers” Nastasi, also posting to VK.com, had this to say about the changes: 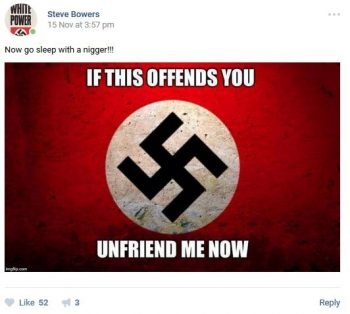