Whether it is about a global pandemic, the 2020 presidential election, the Russian invasion of Ukraine, or the latest mass shooting, lies continue to thrive on social media platforms. According to a 2021 poll by the Pew Research Center, nearly half of Americans get their news from social media. While many people feel confident in their media literacy, YouGov found that only 4% of those surveyed could correctly distinguish false news stories from true ones.

In order to assess platforms’ efforts to stem disinformation and misinformation, we focused on accounts that are repeat spreaders of falsehoods. To assess whether social media addressed these accounts, we investigated lies about two different events: the extremist Buffalo shooting on May 14, 2022, and the 2020 election.

We found that more than a third of the accounts spreading conspiracies about the Buffalo shooting also promoted election lies in May 2022. In addition, repeat engagers were more likely to show signs of automated activity.

When summing the followers of the original posters and retweeters, these falsehoods had a potential reach of nearly 100 million users across Facebook and Twitter and received more than 23 million engagements on Facebook.

We built datasets around two different false narratives: disinformation around a recent alleged documentary called “2000 Mules” that continues to push the falsehood that the 2020 presidential election was stolen; and misinformation around the Buffalo shooting (that it is either a false flag or that the shooter had ties to the Azov Battalion, an extremist Ukrainian group with connections to neo-Nazis).

The alleged documentary “2000 Mules” was released in May 2022 by right-wing commentator and conspiracy theorist Dinesh D’Souza. D’Souza claims at least 2,000 “mules” (individuals who collected and turned in ballots at drop boxes) were allegedly paid to illegally collect and submit ballots in various swing states (Arizona, Georgia, Michigan, Pennsylvania, and Wisconsin). He uses a discredited cell phone data tracking methodology he refuses to reveal to defend this theory. Experts say this data does not support D’Souza’s claims. This film is the latest propaganda tool in the disinformation campaign designed to undermine American democracy and it has been widely promoted on social media.

We built a dataset that comprises posts mentioning either the phrase “2000 mules” or the hashtag “#2000mules” across Twitter, Instagram, and Facebook from April 26 to May 4 collected through CrowdTangle and Datastreamer. The highest-profile posts, posts from Twitter accounts with more than 100,000 followers and Facebook posts with more than 10,000 total interactions, were manually reviewed to confirm they were promoting the movie and ensure the precision of the query.

To build the dataset around misinformation related to the Buffalo shooting, we collected posts across Twitter in the four days following the shooting related to both the False Flag and Azov Battalion falsehoods. The False Flag set of 148 original tweets was compiled through a combination of searches for “false flag”, “glow/glowie”, and “psyop” alongside terms like“Buffalo” and the shooter’s name. The results were manually reviewed to assure all 148 endorsed or perpetuated the lie rather than criticized it. Information on the retweeting accounts was added to this.

We compiled a dataset on the Azov Battalion misinformation by starting with a single viral misinformation tweet and snowballing the 200 most recent tweets from both 200 followers of the original tweeter and 200 of the followers’ followers. Given the volume of snowballed tweets, we used a machine learning-based model to filter relevant tweets. All Twitter data was collected through the official API endpoints. A sample of the accounts from the false flag set and nearly all of the accounts from the Azov Battalion set were passed through Botometer’s V4 endpoint and the CAP English score was used to determine their authenticity.

To understand how many Buffalo misinformation spreaders also spread the “Big Lie" (the belief that large-scale voter fraud changed the outcome of the 2020 election), we pulled the 200 most recent tweets up to a month before collection for all accounts that engaged with either the False Flag or Azov Battalion falsehoods. These tweets were queries for the presence of one of the following terms: "2000mules", "2000 mules", "stopthesteal", "stop the steal", "truethevote", "true the vote".

a) Extent of Election Disinformation

Among the largest accounts to amplify this disinformation are Florida Congressman Matt Gaetz, far-right agitator Sebastian Gorka, and Rudy Guiliani, the former mayor of New York City. On Facebook, the posts garnered 3.6 million interactions and 19.8 million views for linked videos. Two of the five Facebook groups where this was most posted were fan pages for Elon Musk and Tucker Carlson, each posting the disinformation more than 100 times.

Select posts and accounts have disproportionate reach. The top 10% of the largest Twitter accounts accounted for 88% of the total potential followers reached.  Reach was even more skewed on Facebook where an even smaller portion of posts constituted the same percentage of interactions and views.

Using user-reported locations on Twitter, we were able to infer the locations of people spreading lies about a stolen election. While the self-reported locations field is imperfect (users can make up locations or set their location to somewhere else and only 52% of users we looked at provided this information), as is the tool to extract coordinates from it, it can be used to approximate geography. After adjusting for state populations, Florida, Arizona, Indiana, Nevada, and Alaska have the highest per capita rates of tweeting about the documentary. 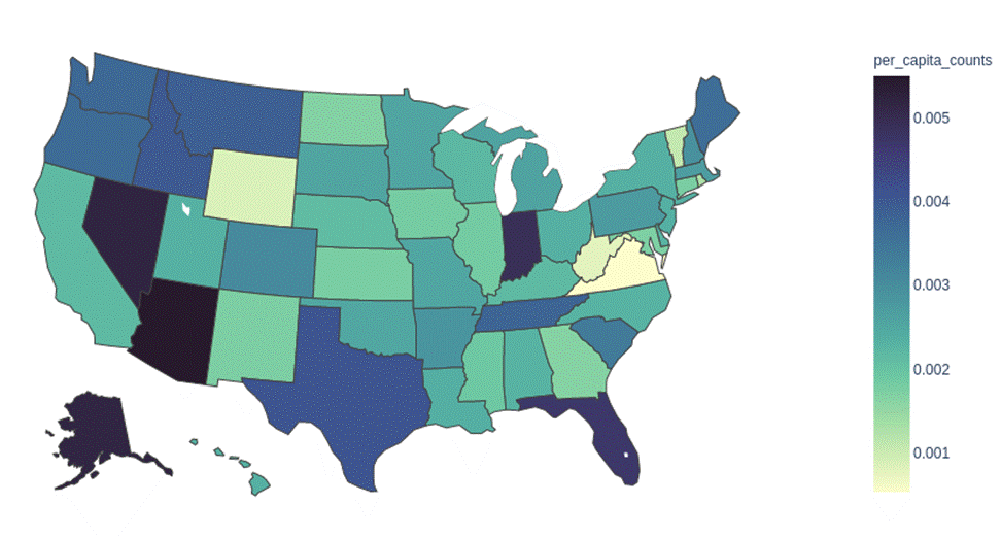 b) Extent of Buffalo Misinformation

ADL researchers identified 134 accounts that promoted misinformation that the Buffalo shooting was a false flag event conducted by the U.S. government in 148 tweets. At the time of collection, these tweets garnered 11,469 retweets, 53,998 likes and were potentially shown to more than a million followers. Account information was successfully collected for 9,543 of retweeting accounts that make up 92% of the retweets. Their followers tally an additional almost 14.8 million.

ADL researchers identified 664 unique accounts that tweeted misinformation related to the Buffalo shooter’s membership in the Azov Battalion 751 times. These accounts were identified using a single collection method tracing the spread of a single tweet and thus the prevalence of this type of misinformation on the platform is likely far greater. These tweets were liked 216,444 times and retweeted 49,952 times.

Additionally, more than three million followers of these accounts may have been exposed to these tweets and retweets.

For all accounts that tweeted about Buffalo misinformation, we looked at whether they also tweeted about the “2000 Mules” documentary or other election disinformation in the previous month. (Because we limited our search to May 2022, we are likely undercounting the number of repeat spreaders of these two lies.)

We found sizable overlap between accounts that deny the legitimacy of the 2020 election and those that dispute what transpired in Buffalo. 3,856 (37.4%) of the False Flag or Azov Battalion misinformation accounts we were able to check (some were already removed by Twitter) also tweeted about the “2000 Mules” documentary or other election disinformation in the previous month. Notable accounts with 650,000 followers between them are former NYPD officer John Cardillo, tennis player-turned-author Janie Johnson, podcaster Noor Bin Ladin, homeschool advocate Cari Kelemen, and real estate investor Steve Pohlit. Cumulatively, the repeat engagers had nearly five million followers.

Disinformation and misinformation on social media presents a serious social harm, the consequences of which are rarely confined to the online spaces where it originates. The events of January 6th, which left five dead and up to 60 Capitol Police officers injured, highlighted the significant reach and influence campaigns spreading lies can have. Additionally, conspiracy theorist Alex Jones’ promotion of the idea that the Sandy Hook school shooting was a false flag event played out by crisis actors led to the widespread harassment of the victim’s families. Jones shared personal information about the victims’ families and his supporters continuously sent them death threats and harassed them with false police reports, leading the father of one victim to move a dozen times. Social media companies need to take action against the disinformation on their platforms long before the consequences move offline.

Platforms can strengthen their action against disinformation and misinformation in several ways. First, emergency responses should include both proactive and reactive measures as there are likely to be both recurring false narratives (e.g. false flag, election fraud) as well as event-specific ones (e.g. Azov Battalion, mules). Second, there should be lower tolerance for high-visibility accounts that become disinformation nodes and this tolerance should be even lower for accounts of this nature that are repeat offenders. Third, misinformation labeling should be more frequently applied and discoverable through the API. Fourth, sharing and liking content should be viewed as an endorsement and moderated accordingly. Finally, Twitter should reinstate their short-lived civic integrity initiative banning 2020 election voter fraud allegations and should expand its crisis misinformation policy to include hate-based attacks. Absent robust platform measures, the Big Lie and mass shooting misinformation is flourishing and repeat abusers and high-visibility accounts go unpunished.