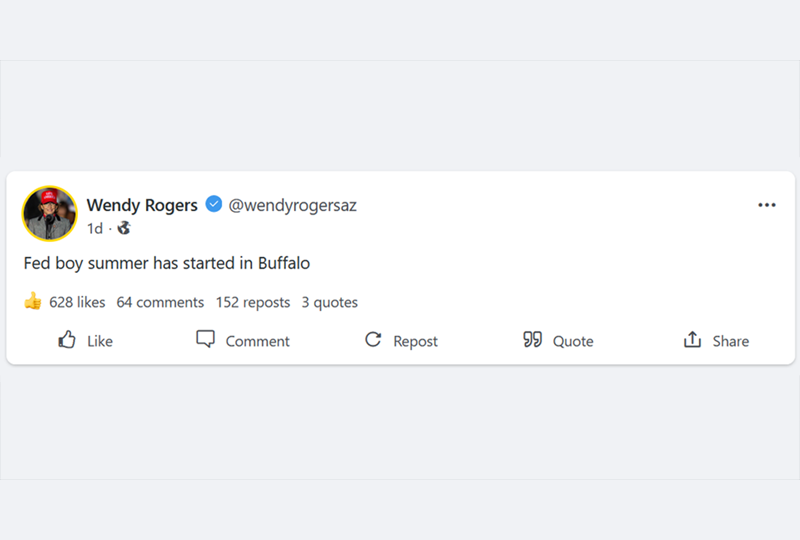 After news broke of the deadly white supremacist shooting in Buffalo on Saturday, May 14, 2022, extremists, politicians and ideologues offered their takes on the attack. Some far-right extremists lionized the shooter as a “saint” and encouraged others to mimic his actions. Others concocted a wide array of conspiracy theories, rooted in racism and antisemitism, to dismiss the shooting as a false flag. Far-right politicians and pundits used some of the same talking points.

This crossover illustrates the extent to which extremist beliefs have become part of the mainstream and highlights the ongoing danger of providing a microphone to those hateful, conspiratorial beliefs.

Violent, Far-Right Extremists are Lionizing the Buffalo Shooter as a Saint

Extremist Telegram posters praise the Buffalo shooter as a saint.

As seen following other acts of racially motivated violence, violent extremists, especially those who embrace an accelerationist mindset, are hailing the Buffalo shooter as a “saint,” equating him to earlier terrorists, including Dylan Roof, Brenton Tarrant and Timothy McVeigh. Posting comments like “All Hail Saint Gendron,” these admirers have assigned nicknames such as “Saint Jimbo” (the shooter went by a permutation of “jimbo” online) and have added his name to a “Hail and Saints” calendar.

It is clear from online discussions that violent extremists hope others will engage in similar attacks, with one poster saying that the Buffalo shooting gives them hope. Accelerationists are creating celebratory propaganda invoking the shooting, often incorporating media content directly from the shooting, which has the potential to reach and radicalize susceptible individuals.  While its origins may be in extremist corners of the internet, this propaganda spreads over time. We have already seen it move from extremist Telegram groups to more easily accessible radicalizing spaces like the 4chan image board.

In far-right online spaces, extremists are claiming that the Buffalo shooting was a “false flag,” that the shooter was Jewish, a federal agent (a “glowie”) or a tool of the Biden administration meant to speed the implementation of gun control measures or online censorship. Some also theorize the shooting is meant to serve as a distraction from the leaked Roe v. Wade draft opinion or what they consider the failures of the Biden administration.

Extremists in radical Traditionalist Catholic spaces, for example, concocted the idea that the shooter’s name has Jewish roots, that he “looks Jewish” or other misguided rationales. The conspiracy theory that the shooter is Jewish has quickly spread to both extremist spaces and the alternative platform Gab. 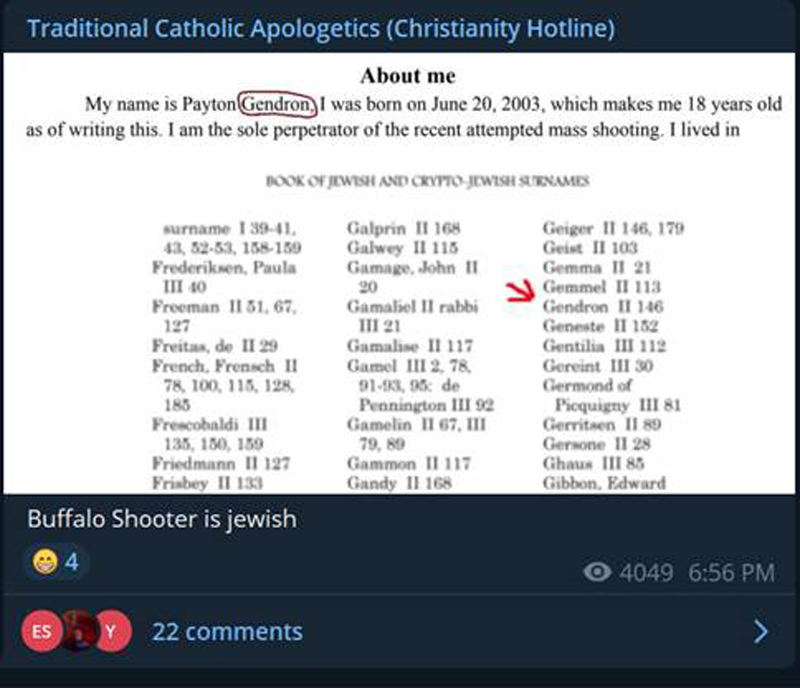 Early claims in extremist Telegram group that the Buffalo shooter is Jewish.

On another more explicit white supremacist internet forum, some users posit that the shooting was orchestrated as an excuse to censor the internet or implement more gun control. 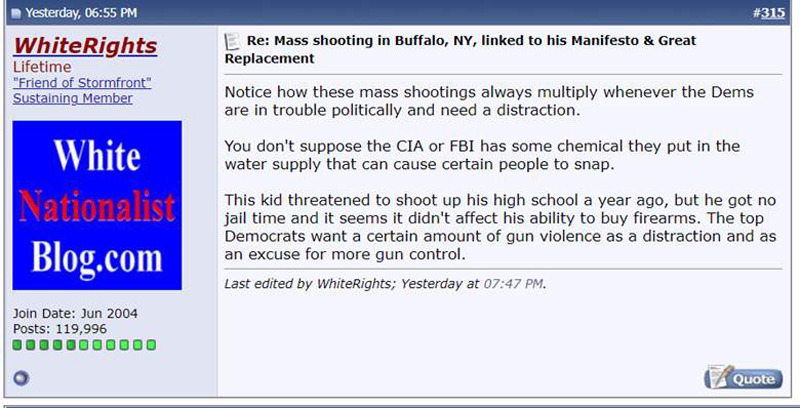 Users on a white supremacist internet forum speculating about conspiracy theories after the Buffalo shooting.

Another conspiracy theory found on extremist-friendly Kiwi Farms is that the Buffalo shooting was orchestrated to distract from the Roe v Wade draft opinion leaked from the Supreme Court.

In the wake of the shooting, some white supremacists and other racist right-wing extremists are trying to deflect from the crime at hand to focus on other topics with racist subtexts. To portray Black people as the “real” problem, extremists bring up crimes committed by Black people, White victims of crimes perpetrated by Black people, and “Black-on-Black” crime statistics. These talking points often also incorporate conspiracy theories about “media blackouts” or bias. This deflects from the very real issue of white supremacist violence in the United States.

In a thread on a white supremacist internet forum about the Buffalo shooting, user “SPYDERcat” posted a list of “Ultra Violent Black Extremists [sic].” This was done to distract from the heinous acts in Buffalo and is a common white supremacist rhetorical device. The false equivalencies underpinning these types of responses are pervasive in white supremacist discourse. The shooter himself wrote the names of victims of alleged “Black-on-White” crimes on his weapons.

Racist extremists have also promoted irrelevant or misleading crime statistics to paint the same picture of Black people being the “real” problem. Often this tactic is part of a concerted effort by extremists to change the conversation surrounding a white supremacist attack from which they want to deflect. 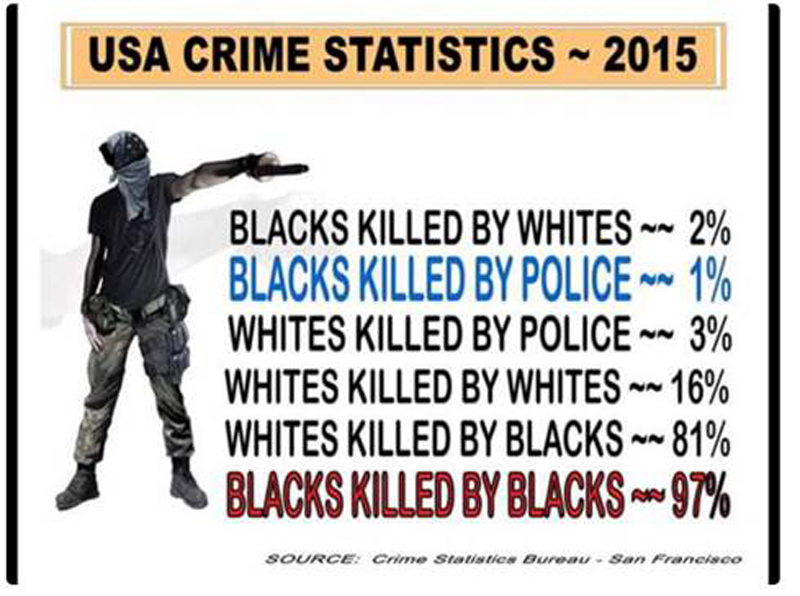 Aside from the racist subtexts of this messaging, extremists often incorporate conspiracy theories of a “media blackout” surrounding the events which they deflect towards. Other times they point to what they perceive as media bias, or how the media never covers the “real news.” One instance of this is in addition to the list of “Ultra Violent Black Extremists [sic]” where the poster says the media “usually ignores” violence perpetrated by Black people.

In the days following the shooting, prominent politicians and pundits have contributed to the harmful conspiracy theory dialogue surrounding the attack. Arizona State Senator Wendy Rogers and U.S. House candidate and far-right anti-Muslim bigot Laura Loomer have both taken to social media to espouse the conspiracy theory that the FBI and the federal government are complicit in the attack. Alex Jones echoed similar conspiracy theories on “The Alex Jones Show.”

Two days after the shooting, Alex Jones parroted a hodgepodge of conspiracy theories rooted in extremist rhetoric on “The Alex Jones Show.” When addressing the shooter’s motive, Jones suggested that the shooter was “brainwashed,” and “the Globalists are the enemy… we don’t have baby formula, and they’ve got some crazy person they knew was going to do this and they let him do it again.” The concept of “globalists” ruling the world often touted by Jones is rooted in antisemitic conspiracy theories.

Laura Loomer has gone further, claiming the Buffalo shooting is a hoax perpetrated by the Democrats, and that the mainstream media are complicit in what she says is an attempt to start a race war. 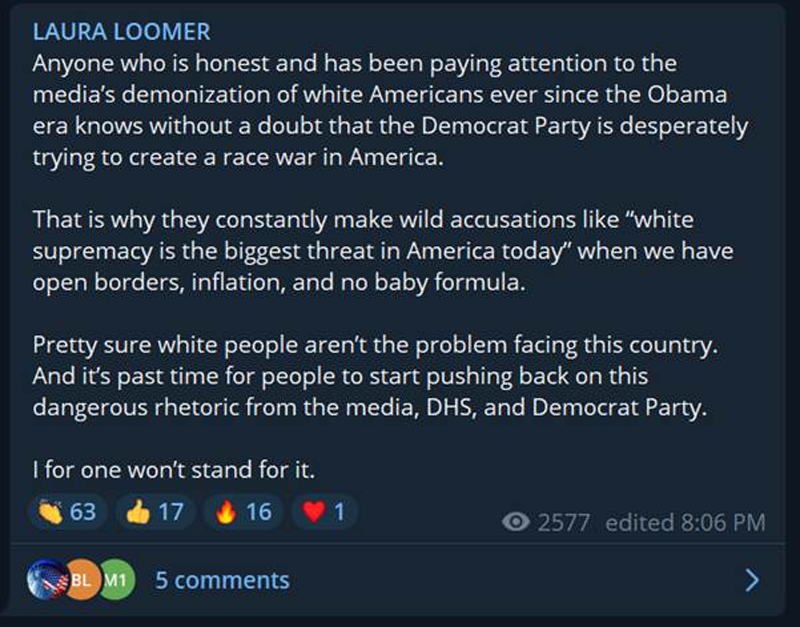 The messaging coming from Rogers, Loomer and others closely mimics white supremacist rhetoric. Laura Loomer, who has previously associated with white supremacists, posted on Telegram her support for the white supremacist, antisemitic conspiracy theory, “The Great Replacement,” which was a primary driver of the attack in Buffalo..

Both Loomer and Rogers have made statements that include references to the “White Boy Summer” meme. These memes, which gained a popular foothold in 2021, have been coopted by white supremacists, especially the Nick Fuentes and the Groypers, with whom Rogers has been associated, as both a call to action and to normalize white supremacist aesthetics. Shortly after the Buffalo shooting, Rogers posted “Fed boy summer has started in Buffalo” on Gab. This is a clear call back to “White Boy Summer” and underscores her conspiratorial thinking about the “feds’” involvement in the shooting.  The post prompted the Arizona State Senate to vote (24-3) on May 16, 2022, to have its ethics committee investigate Rogers.

Disclaimer: As a 501(c)(3) organization, ADL does not support or oppose candidates for elective office.