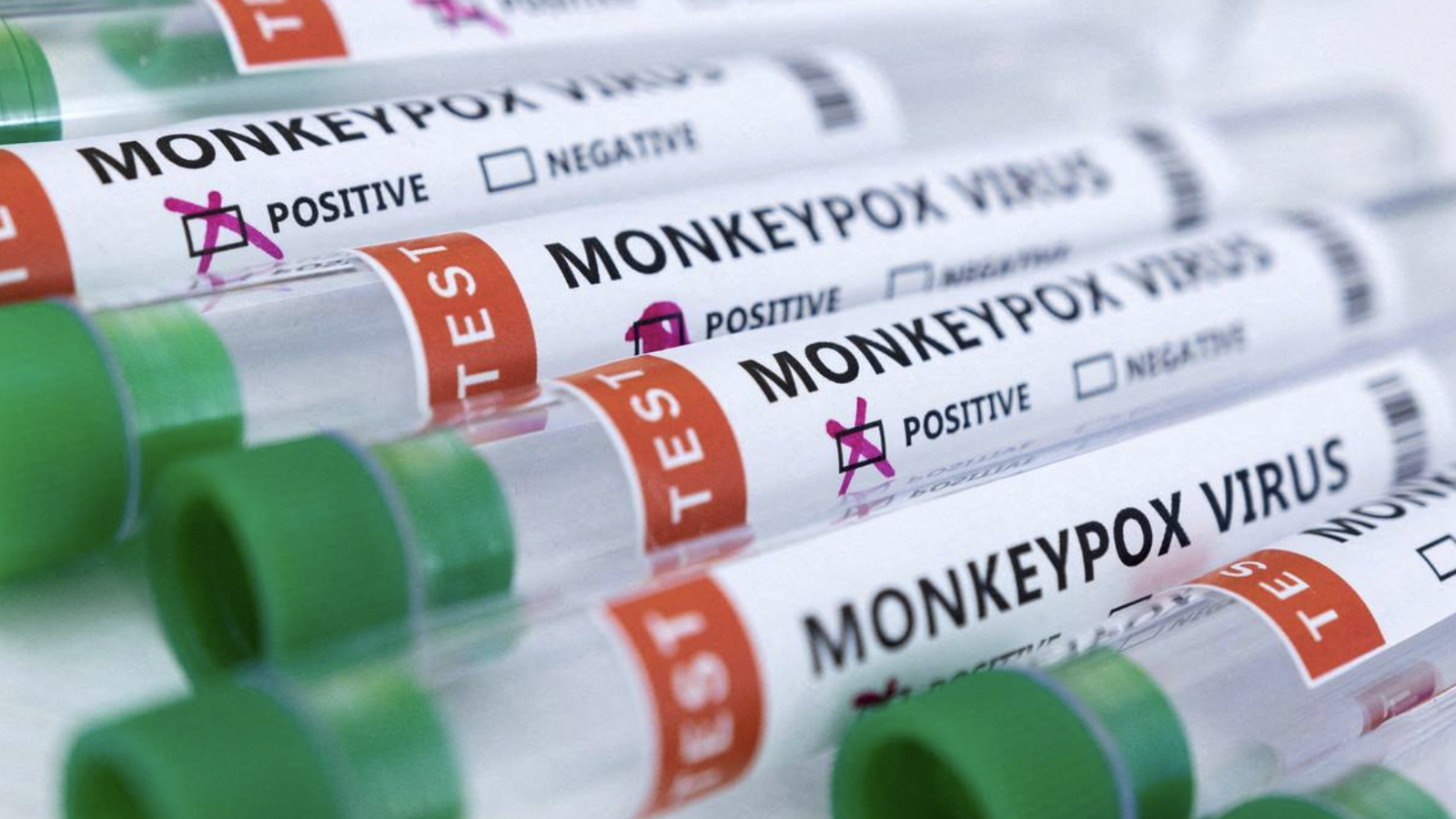 On July 22, 2022, CDC director Dr. Rochelle Walensky was interviewed on Washington Post Live to discuss the current state of COVID and other public health issues. During the broadcast, she noted that two children had contracted monkeypox – both of whom could be “traced back to individuals who come from the men-who-have-sex-with-men community.”

On July 23, 2022, the World Health Organization declared monkeypox a global health emergency. Later that day at 6:22 pm, Marjorie Taylor Greene shared Walensky's segment about monkeypox in children on several of her social media pages with the caption, “If Monkeypox is a sexually transmitted disease, why are kids getting it?” 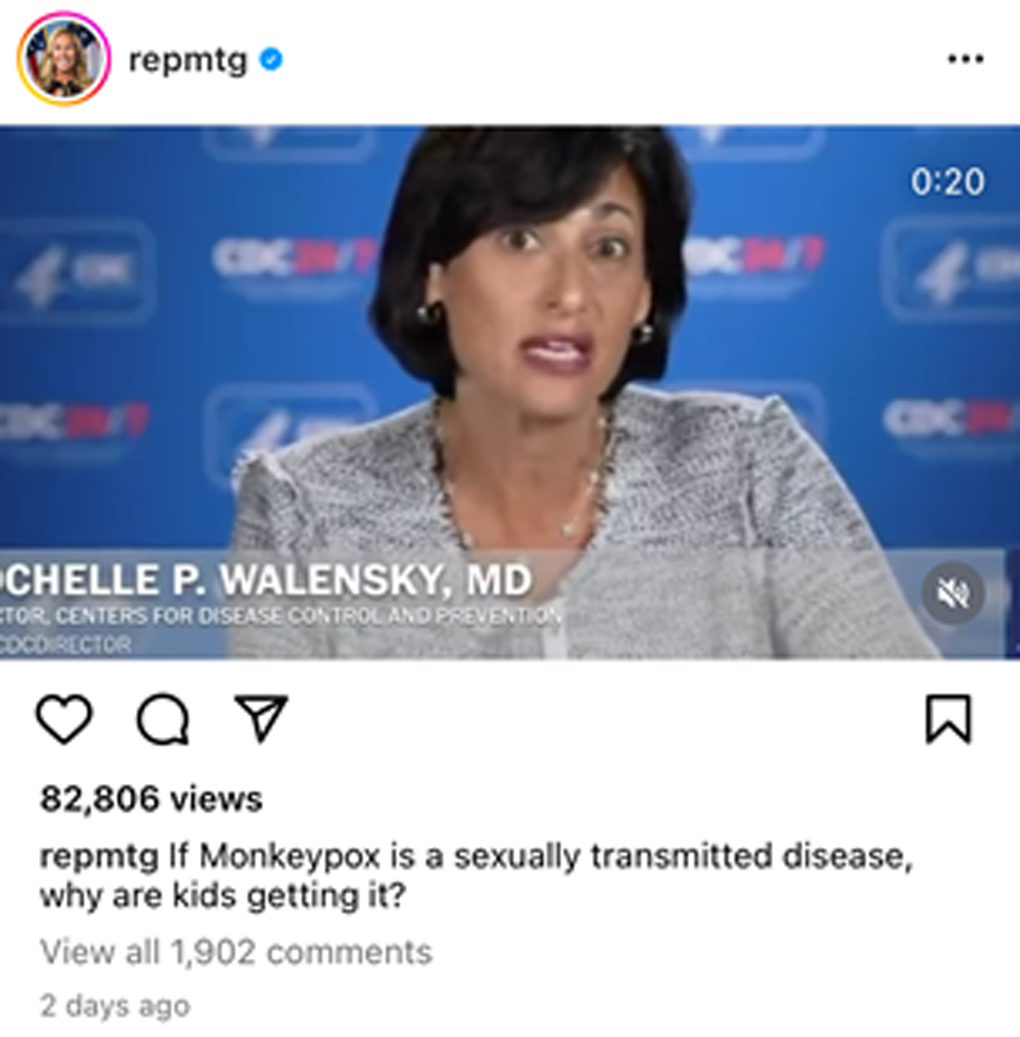 By the evening of July 25, 2022 – only about 48 hours after the initial posts – Greene saw significant engagement counts on her social media accounts, including Instagram, Twitter, both of her Telegram accounts and Truth Social.

Greene’s post was certainly not the first time the narrative around monkeypox had been twisted to suggest nefarious intent or raising disingenuous questions about the disease’s origin and spread. Such claims are circulating on mainstream platforms and outlets like Twitter (one user tweeted on July 21, 2022: “If kids catch monkeypox, it is indeed a very serious issue, because it implies probably someone sexually abused that child”) as well as platforms that have historically provided cover for extremists, including Telegram and 4chan, where a post from July 22, 2022, drew an explicit connection between monkeypox and “children being molested by homosexuals.”

Greene’s post, however, gave the conspiratorial and bigoted theories additional oxygen – and reach.

By the evening of July 25, 2022, the content had appeared verbatim on 8kun’s Q Research board, TheDonald, GreatAwakening.win, and Telegram (including an official Philippines-based Proud Boys channel).

It could be argued that there is nothing explicitly nefarious about Greene’s post, but that she is rather trying to highlight the first question: Is it really a sexually transmitted infection if children are getting it? Regardless of her intent, two misleading narratives have emerged since Greene’s posts: That monkeypox is a sexually transmitted disease, and that men in the LGBTQ+ community may be solely responsible for spreading it to children through inappropriate sexual contact.

The claim that monkeypox is spread exclusively through sex has already been debunked; it is well-established that any close contact can cause transmission, despite the virus currently being present within a particular community – a reality that health communicators, fact checkers and news organizations have been trying to convey for months. 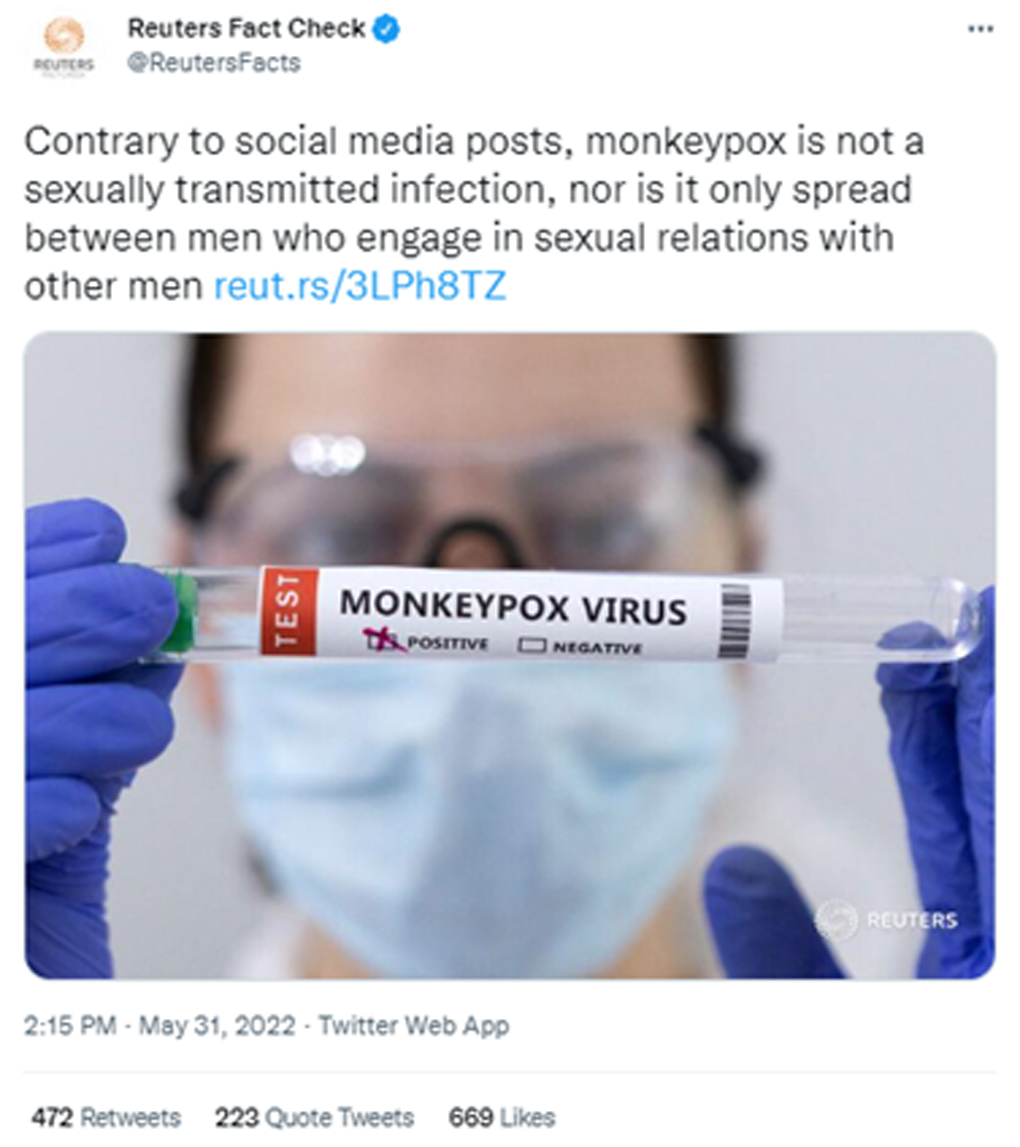 Despite these efforts, the heightened focus on monkeypox being transmitted through sexual contact has been used by extremists in conjunction with homophobic slurs and demonization of gay men, as seen in a white supremacist group’s Telegram post from May 21, 2022. In this post, a forwarded message containing vulgar slurs suggested that “as many gays as possible should get together to contract monkeypox”, conflating the transmission of the virus with pride activities:

Months later, the narrative has persisted among extremist groups. On July 24, 2022, a Long Island Proud Boys chapter on Telegram forwarded a hate speech-laden post from Gavin McInnes who posited that monkeypox comes from “decrepit perverts,” depicting sexual relations as violent, drug-ridden and unsanitary: 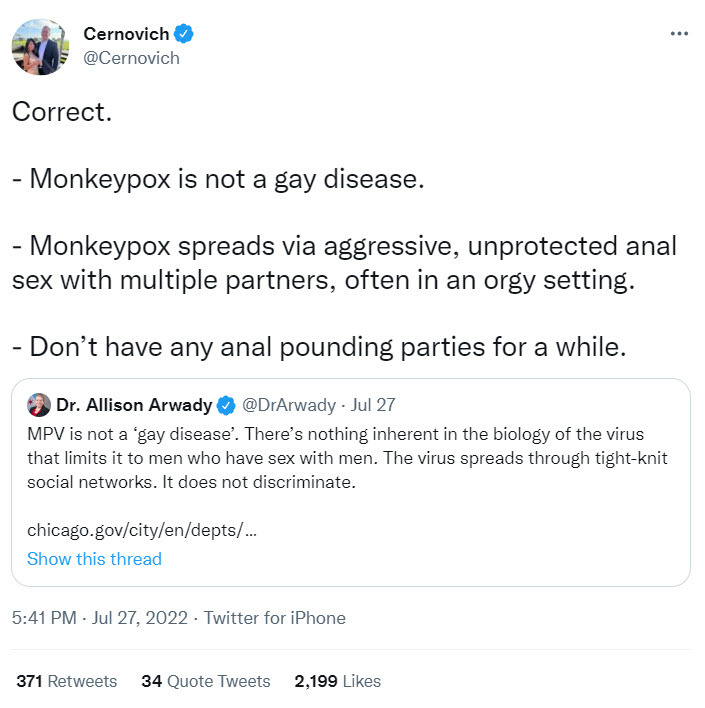 Misleading Narrative #2: Monkeypox is being spread to children by men in the LGBTQ+ community through inappropriate contact

Given that Greene has previously made statements that demonize the LGBTQ+ community and propagate conspiracy theories around gender-inclusive discourse, drag queens and trans individuals – including unfounded accusations that anyone who supports those concepts or people is a pedophile or “groomer” -- her tweet may carry a darker implication: that children are contracting monkeypox via sexual abuse by “pedophiles” in the LGBTQ+ community.

This implication comes at a time where LGBTQ+ centered events, including Pride parades and drag queen story hours, are under attack by right wing extremist groups like Proud Boys, Patriot Front and NSC131.

Whatever Greene intended to convey with her tweet, many who quoted her were far more explicit: 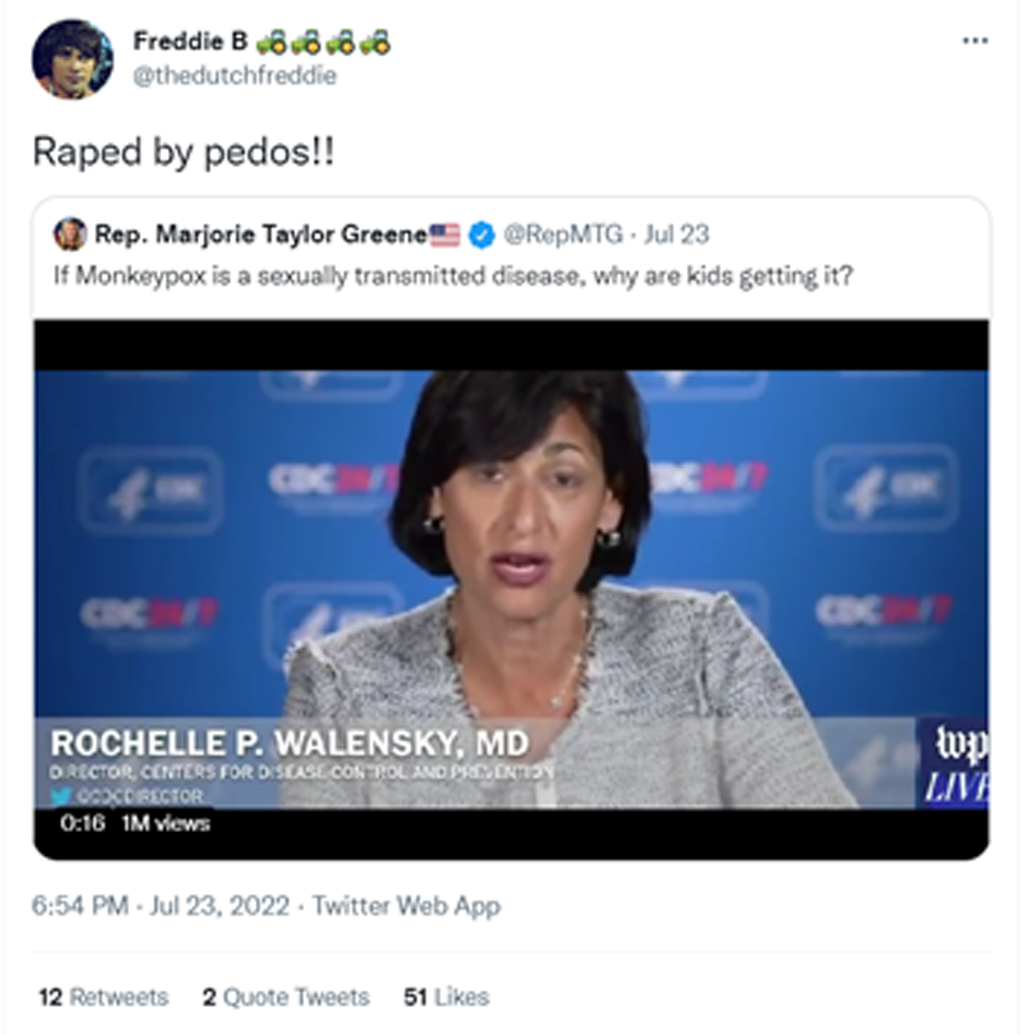 Comments on Greene’s Instagram post (which included the same exact language) made similar allegations, including one poster who alleged that children contracting monkeypox means a gay man “has probably been fiddling with that child and/or children.”

On alternative platforms such as Gab and greatawakening.win, users responded to Greene’s suggestion with profane, homophobic accusations and threats: 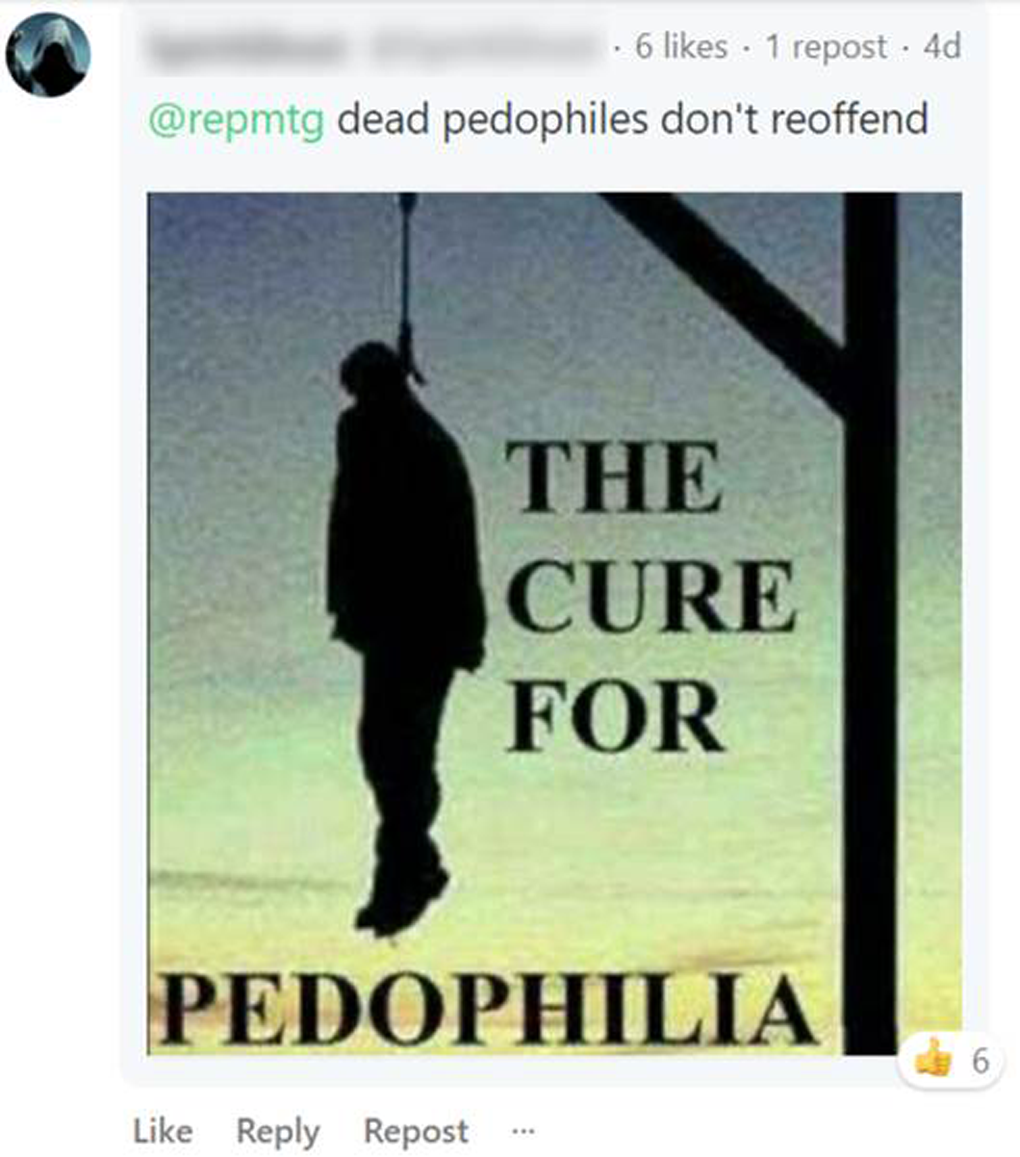 In a broadcast published on July 25, 2022, far-right media pundit Stew Peters and conspiracy theorist Dr. Stella Immanuel discussed their speculations about monkeypox in children being transmitted through pedophilia. When Peters asked Immanuel for her input, she stated, “If we have two children that are with people that are living the gay lifestyle, I would want to investigate for sexual molestation.” 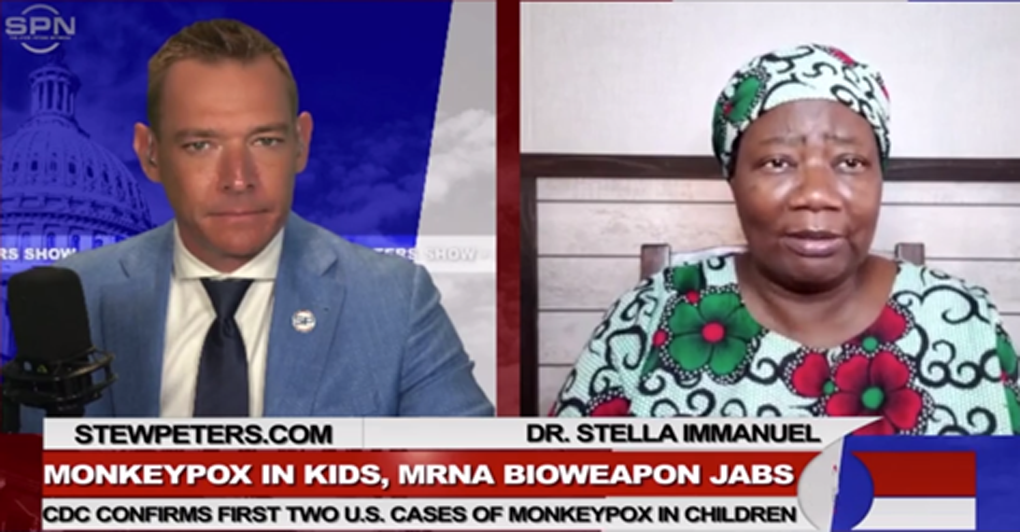 On July 27, 2022, far-right content creator and promoter of election fraud theories Jeremy Herrell stated in a video shared on Instagram that “the CDC actually knows about pedophilia, and they’re promoting it,” followed by outright accusations that men in the LGBTQ+ community raped the children who later contracted monkeypox.

On July 28, 2022, another post shared in a QAnon-centric Telegram channel included an article alleging that the mainstream media are distorting the narratives surrounding monkeypox in an effort "to hide the epidemic of pedophilia and grooming plaguing America”. 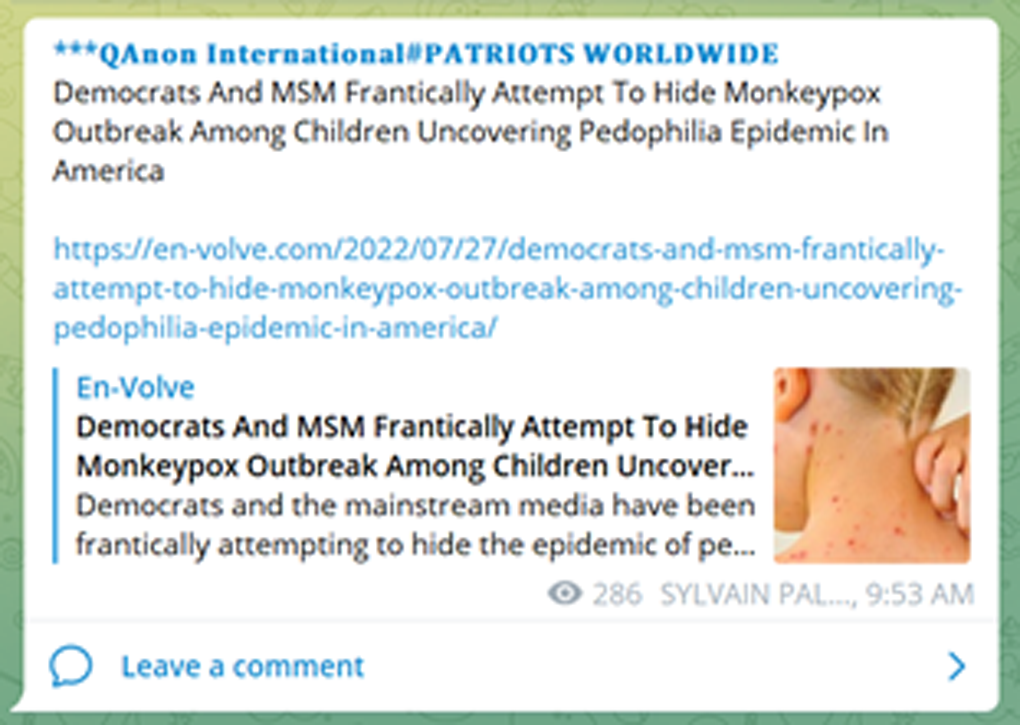 Extremist groups and individuals on Telegram are also promoting this narrative. The following messages were posted in an antisemitic/white supremacist channel on July 26-27, 2022, including a comic which suggests a child contracted monkeypox from his “groomer” stepfather: 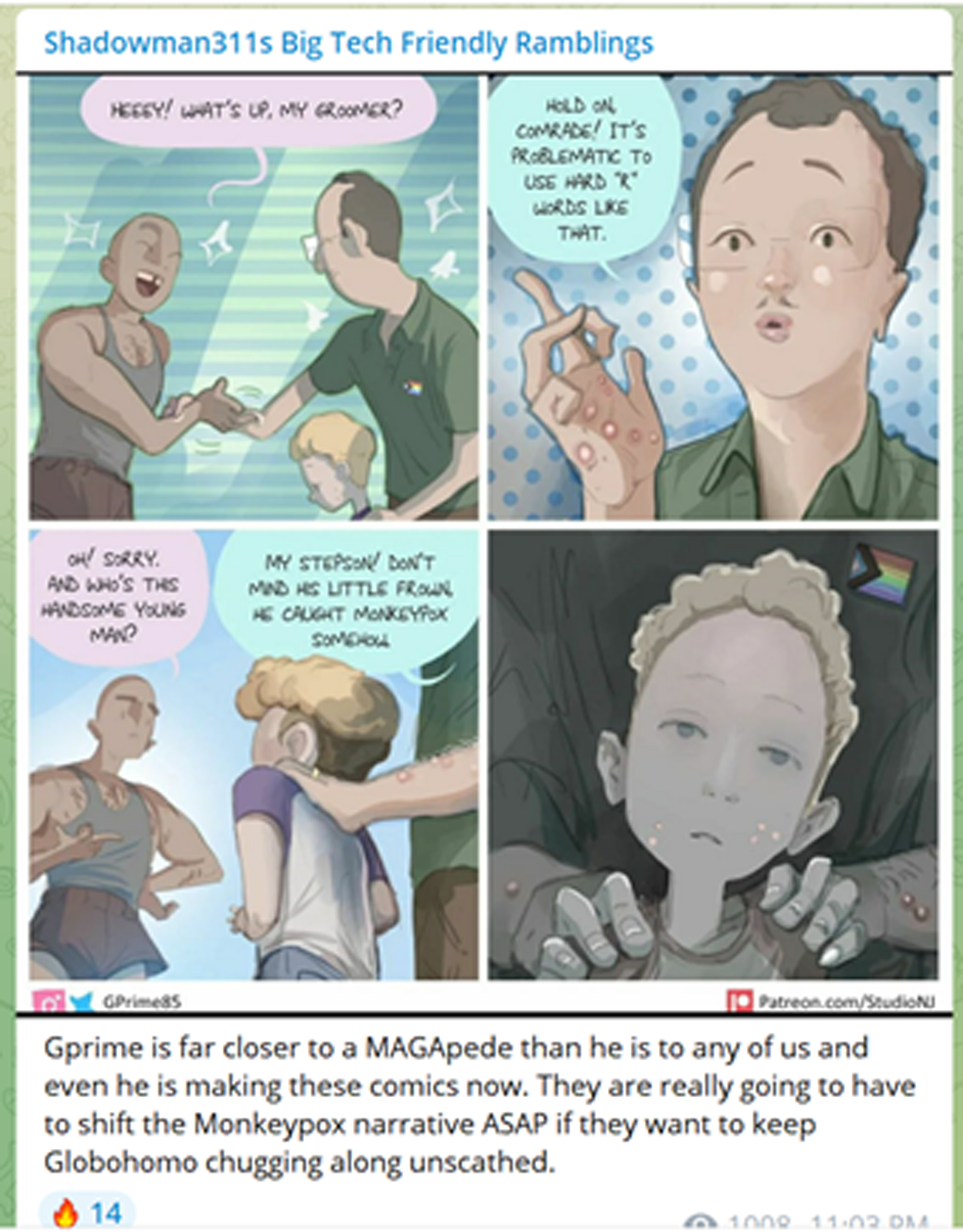 In another white supremacist Telegram channel, one post from July 24, 2022, read: “RED ALERT; MONKEY POX MAY REVEAL CHILD PREDATORY RAPISTS BEHAVIOUR!” The post has since been deleted.

As the monkeypox outbreak continues, misleading narratives about monkeypox are being weaponized against LGBTQ+ communities, who are already at risk for hate speech, harassment and violence by extremists and those who emulate them.

As a 501(c)(3) nonprofit organization, ADL does not endorse or oppose candidates for political office.