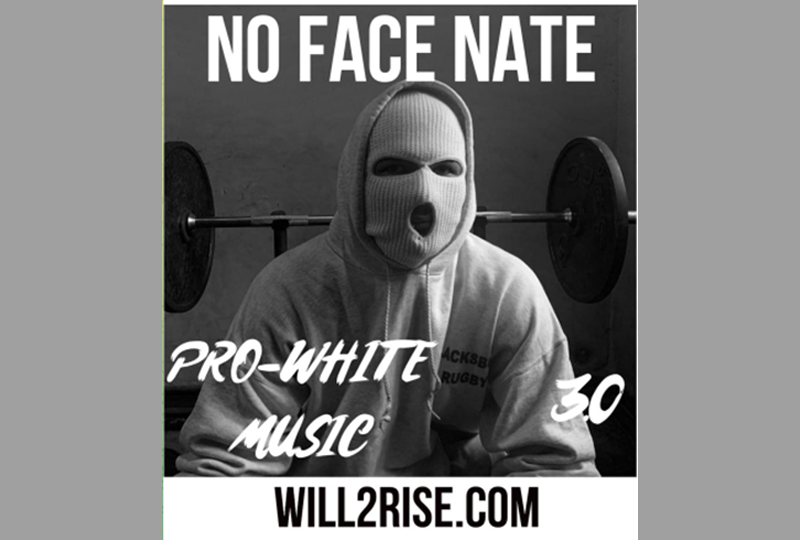 For decades, white nationalists have used music as a tool to spread their hateful beliefs. In January 2022, the white supremacist Rise Above Movement (R.A.M.) and group leader Robert Rundo announced the creation of Will2Rise Records, a music production company catering to white supremacist artists.

In recent years, following the 2018 arrest of key group members that resulted in Rundo fleeing to Eastern Europe, R.A.M. has struggled to maintain relevance in the white supremacist sphere. As part of these efforts to regain prominence, R.A.M. launched their online merchandise arm, Will2Rise, in 2019, and in the summer of 2020 launched Media2Rise, a white supremacist media company that documents white nationalist events across the United States and Europe. Will2Rise Records represents yet another attempt by the group to mainstream and monetize their ideology. 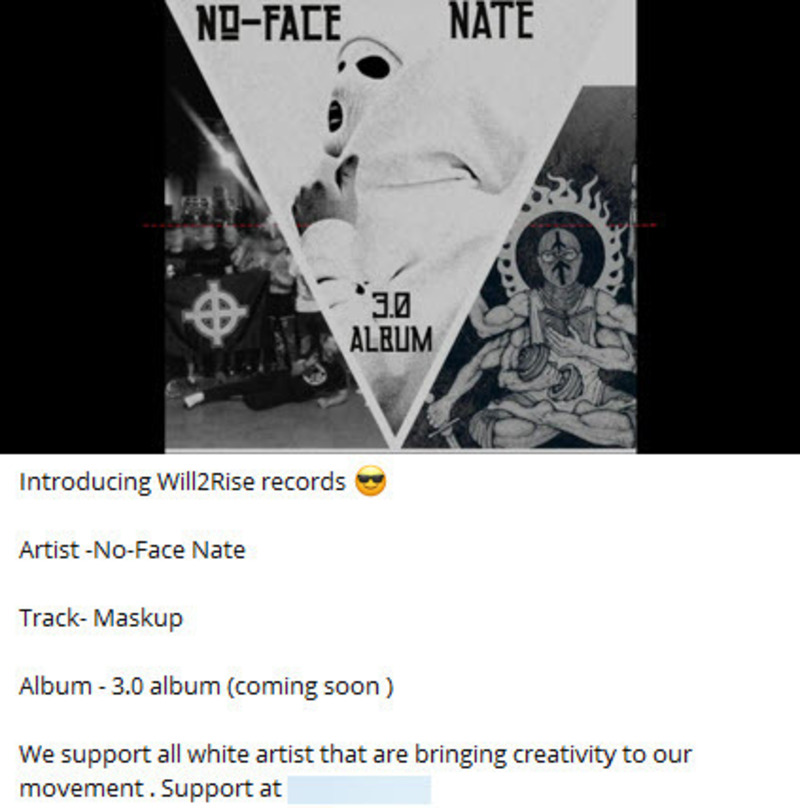 Rundo spoke about the strategy behind the creation of Will2Rise Records in a February 2022 blog post, arguing the potential and importance of "a truly sophisticated guerilla marketing campaign" that tactically targets active, young white people - at hockey games, NASCAR races, MMA tournaments and motocross courses. Rundo went on to highlight the importance of "white YouTube rappers" in this effort, who could make white youth "increasingly comfortable identifying as White in a positive way and exploring what that identity means to them."

In the blog, Rundo cited a range of inspirations: the Skinhead scene and Rock Against Communism music shows, fascist rap concerts in Italy and National Socialist black metal festivals in Ukraine and highlights the importance of music in propaganda and recruitment. "Planting the seeds of future global White consciousness requires total engagement with and influence on everyday life and culture,” he wrote.

Will2Rise Records’ inaugural artist was rapper No-Face Nate, who released an album titled "3.0 album" in early 2022 – a reference to "white nationalism 3.0," a concept Rundo introduced in a December 2020 essay in which he wrote that R.A.M. and other white nationalist groups were part of "white nationalism 2.0." These groups, he wrote, had upwards of 50 members and were active on mainstream social media, making it easy for researchers to identify members.

White nationalism 3.0, the result of lessons learned from the 2018 arrests and prosecutions of R.A.M. members, favors groups that are local, decentralized and careful about their online image, making it more difficult for researchers and law enforcement to identify members and shut down operations.

No-Face Nate's album focuses on a variety of white nationalist themes, including an entire song from the perspective of Rob Rundo and R.A.M. titled "Rise Above." His other songs, like "Maskup [sic]," are calls for young white men to participate in real life activism. Lyrics include: "Mr. Nice Guy’s dead...the bullets come free for the Fags and the Reds," "Time to cause a ruckus, time to cause a scene, time to mask up like its fucking Halloween" and "Deep inside the soul of every whiteboy is a bronze age savage."

In another song, demonstrating the violent and extreme themes explored in many of the tracks, No-Face Nate asks, "How immortal do you want to be? How much you want to give? Death just once ain't a whole lot to pay to live eternal." The songs often end with shoutouts to Rob Rundo, include speech audio from Rundo and Thomas Rousseau and provide links to Media2Rise, WIll2Rise and Active Club websites and Telegram channels.

Following the success of No-Face Nate, Will2Rise announced on April 3, 2022, that it was expanding its music holdings and asked followers to submit names of potential new artists for W2R Records. On April 15, W2R Records announced that an individual named Colonizer would “drop” a “new music genre” called "Fash-Phonk." “Fash” is a reference to “fascist;” phonk music is a subgenre of hip hop and trap rap popular with young audiences. Like No-Face Nate’s music, Colonizer’s songs focus on “pro-white” activism and feature fascist and R.A.M. propaganda in its music videos. On April 22, W2R Records announced the addition of Saxon, a self-described “Nazi” rapper who dropped an album titled "Thug Britannica." 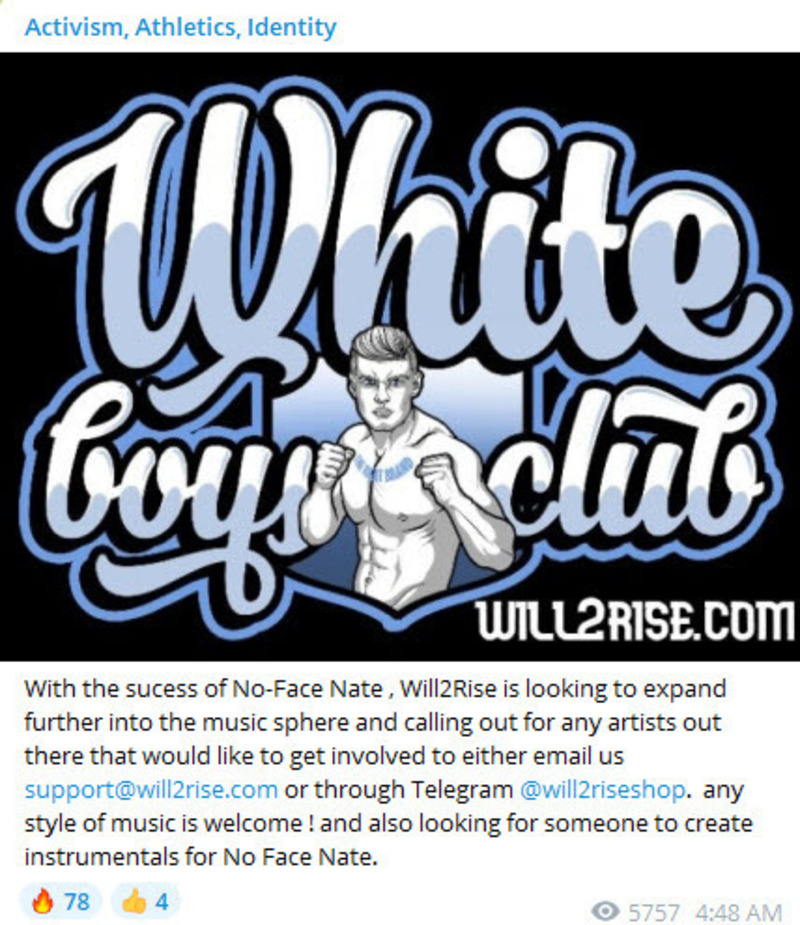 Rundo's efforts illustrate a common strategy in white power music - creating music that is not too overtly shocking and emulates trends in mainstream music, with an eye to drawing new recruits into more extreme elements of the R.A.M. community. "This could take the form of stickering the area the night before an event as much as it could be handing out flyers and engaging in conversation with the attendees of said event,” Rundo said. 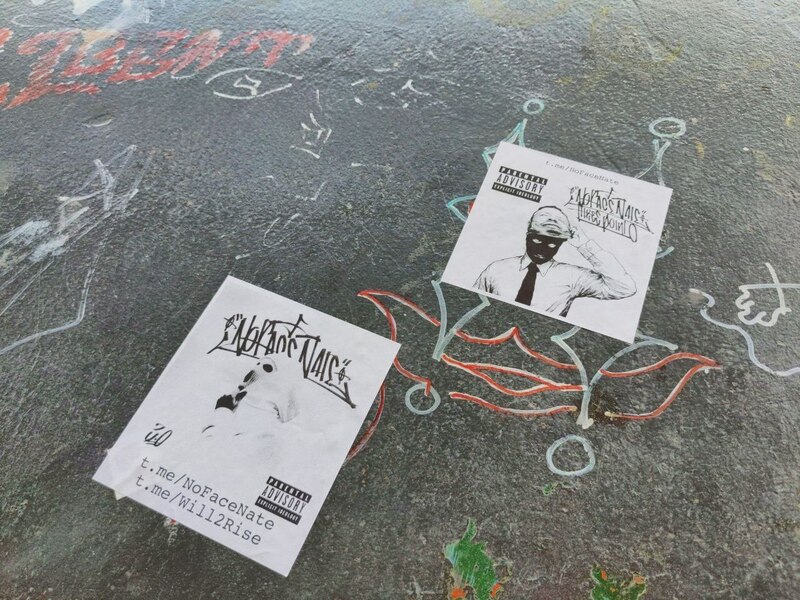 Will2Rise recently began selling a “No Face Nate Activist Pack” for $25.75. The marketing materials read: “This pack is for those looking to promote NFN’s music comes with a mix of 20 stickers and 8 CDs to hand out to locals and show them the 3.0 lifestyle.” R.A.M.-inspired Active Clubs have already begun distributing No-Face Nate propaganda, promoting both the white supremacist album and the Will2Rise brand. On April 30, 2022, Will2Rise began selling No-Face Nate CDs, indicating that they will likely begin selling these white nationalist CDs, stickers, patches and t-shirts to fund the group’s activism.