Robert "LaVoy" Finicum: The Making of a Martyr

On January 26, 2016, Robert "LaVoy" Finicum, one of the anti-government extremists involved in the January 2 armed takeover of the Malheur National Wildlife Refuge headquarters near Burns, Oregon, was fatally wounded by Oregon State Police (OSP) troopers during an attempt by the OSP and the FBI to arrest Finicum and a number of key occupiers. 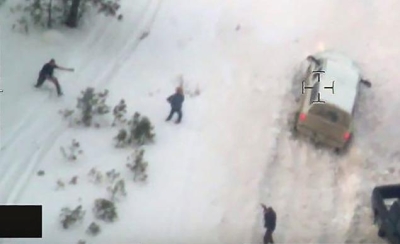 Helicopter footage of shooting of "LaVoy" Finicum (middle) as he seems to reach for a weapon.

Finicum, along with occupation leader Ammon Bundy and others, were traveling in two vehicles to attend a community meeting in John Day, Oregon, where they hoped to find support for their armed seizure. Seeing an opportunity to apprehend most of the takeover leaders away from the refuge and its many armed extremists, the FBI and the OSP organized a traffic stop with roadblocks along the rural road to John Day. One of the two vehicles stopped and its occupants were removed peacefully.

The other vehicle, driven by Finicum, fled the traffic stop, only to encounter a roadblock a short distance away. Perhaps attempting to evade the roadblock, Finicum drove his vehicle into a snowbank, narrowly missing the police vehicles and an officer.

While other occupants stayed in the vehicle—possibly trapped by the snowbank—Finicum rushed out into the snow. Video footage shot from a helicopter shows a trooper approaching Finicum with the trooper’s weapon drawn. Though Finicum had emerged from the vehicle with his hands partially raised, upon seeing the trooper he appears to have reached for something under his jacket (authorities later confirmed he had a firearm). A second trooper emerged from the woods behind Finicum, which Finicum seems to have heard, because he turned around and once more reached into his jacket. Upon seeing this motion, the second trooper fired shots at Finicum, killing him. Ryan Bundy, another vehicle occupant, suffered a minor gunshot wound, apparently from a stray bullet.

The decision by federal and state authorities to make the arrest attempt was in some respects a risky one, not only because officers could be wounded or killed by extremists, but also because the wounding or death of any of the occupiers could have negative consequences in terms of enraging the extreme right and possibly prompting acts of violence.

The arrests did disrupt and demoralize the Malheur occupiers, most of whom soon left the refuge, while a few others were arrested. As of this writing, only four holdouts at the refuge remain, primarily because there is a federal charge against one of them that they want dropped before they will surrender.

However, the death of Finicum unfortunately provided adherents of the so-called “Patriot” movement (which includes militia groups, sovereign citizens, and other anti-government extremists) with something that authorities had hoped to avoid: a potential martyr around whom anti-government extremists could rally. Moreover, anger over Finicum's death could possibly spawn acts of violent retribution. Rage over deadly standoffs between fringe groups and individuals at Ruby Ridge, Idaho, in 1992 and Waco, Texas, in 1993 played a major role in sparking the resurgence of right-wing extremism in the mid-1990s that led to the Oklahoma City bombing and many other acts of violence or attempted violence.

Upon learning of Finicum’s death, “Patriot” movement adherents immediately claimed that he was murdered, though initial accounts from other occupants of the vehicles were confused and contradictory. The FBI publicly released the helicopter video rather quickly—in a clear attempt to quell rumors about the shooting—and, to most viewers, the shooting is likely to appear to have been justified. However, anti-government extremists watching the video have perceived largely what they wanted to see on it and have interpreted the video as still more evidence that Finicum was murdered. Extremists have widely shared the video, which is typically described as proof of Finicum’s “ambush and murder.”

Even before the video was released, the process of turning Finicum into a martyr had already begun. As news of his death spread, extremists on social media created a wide array of graphic memes proclaiming Finicum a martyred hero. One self-declared “liberty speaker” from Washington state, Gavin Seim, uploaded a short video about Finicum titled “The Edge of Revolution.” In the video, Seim describes Finicum as “one of the finest patriots that America could hope to have,” who showed people “what it was like to be a founding father.” Seim urged viewers to “rise for liberty,” claiming that “we can no longer allow the government to murder and abuse and terrorize…These criminals spilled blood yesterday.” Within two days, Seim’s video had received over 110,000 views.

Similarly, musician Jordan Page posted his own video, widely shared on social media, singing a song of his own composition, “The Ballad of LaVoy Finicum,” intended to make a folk hero out of the anti-government occupier:

He left his home to go and take a stand
His voice rang out across a deafened land
And in the end it was a bullet that exposed the lies
A truth remembered is a battle won
And though his murder cannot be undone,
It rings out like an echo, thundering across the night

Page’s song was the most popular of several songs related to Finicum’s shooting that have appeared on YouTube or elsewhere.

One ostensible Finicum supporter is using a t-shirt website to sell “LaVoy Finicum Memorial” t-shirts for $21.99, with proceeds promised to go to the Finicum family—just one of the websites now selling Finicum t-shirts and sweatshirts. Another supporter announced the auction of a framed print of a painting—starting bid, $2,500—with the proceeds allegedly going “to the Bundy Ranch and/or a fund for Levon [sic] Finicum memorial.”

As quickly as news of Finicum’s death spread, supporters of the Malheur takeover began to organize events—rallies, protests, vigils, and memorials—centered on the dead occupier and designed to raise sorrow and anger over his death. As early as the day after the shooting, occupier supporters (and, allegedly, some former occupiers) held a small “candlelight vigil” in Burns, Oregon.

In southwestern Utah, Finicum’s home, supporters organized a memorial for him in front of the Iron County courthouse. The event seems to have included at least one former occupier in attendance, but its centerpiece was Iron County Commissioner Dave Miller, who called the death of Finicum a “travesty” and hoped “the truth” would come out. Other regional events, including one for the Paiute County courthouse, were allegedly also held.

In Phoenix, Finicum supporters Israel Torres and Blanka Nieves, who had previously held support rallies for the Oregon occupiers, organized a “We Are LaVoy” rally on January 29 at Wesley Bolin Plaza, with around 30 or so attendees. Another protest was allegedly organized in Portland, Oregon.

Las Vegas, Nevada, saw a handful of Tea Party activists and anti-government extremists led by Karen Steelmon and Greg Whalen (the latter of whom was in telephone contact with the remaining occupiers in Oregon) organize their own impromptu demonstration in front of the federal courthouse soon after the shooting. They declared that Finicum, who had “been defending American soil from a tyrannical government,” was ambushed and murdered by the FBI. The pair also organized a second Las Vegas courthouse rally on the weekend following the shooting; 12-15 people seem to have participated in that event.

Other events also occurred on the weekend of January 30-31. The one most covered by the media occurred in the long-suffering town of Burns itself, where the anti-government Pacific Patriots Network organized a “rolling” protest of vehicles through the town; estimates of the number of protesters ranged from 50 to over 100. With another rally organized by Idaho Three Percenters at the Harney County Courthouse in Burns for February 1, it is clear that Burns’ ordeal is not likely to end soon. Both of these groups declined to support the Malheur occupiers’ earlier actions but have jumped into the conflict with the death of Finicum. Others traveled out to the location where Finicum was shot and erected a makeshift memorial.

Protests and rallies occurred outside Oregon as well. Heather Lucas and Mike Kay organized a Finicum protest at the FBI office in Columbus, Ohio, with around 45-50 attending from right-wing groups and Anonymous. “Revolution starts here,” said one speaker, “Make no mistake.”

Elsewhere in Ohio, a handful of activists in Lima, Ohio, hung signs and protested on a freeway overpass on I-75. One protester posted on Facebook after the event that the federal government let “rioters burn, loot and assault in Ferguson and Baltimore but when a patriot stands up peaceful [sic] for his constitutional rights he is gunned down by the federal government.”

A similar overpass protest occurred on January 30 across the country in Salem, Oregon, with about 10 protesters. Both were apparently organized by activists with right-wing group “Overpasses for America.” More such overpass protests are scheduled for the first weekend in February in Oregon and elsewhere.

That weekend, the weekend of February 5-7, is when a number of additional events will be held. Of these, the most significant is the memorial service for Finicum in Kanab, Utah, organized by his family, who turned it into a political event by reaching out and announcing it to “Patriot” and right-wing groups to get their attendance. Karen Steelmon, the Las Vegas Tea Party figure mentioned above, announced she was organizing a “procession” of people from the Las Vegas area to “pay respects” at the memorial service. Utahn and former Malheur occupier Wes Kjar has declared he will organize a “memorial horse ride” to the service.

For those too far from Kanab, Finicum supporters have organized the “National Memorial & Prayer Vigil for LaVoy Finicum,” for which they urge people to gather in front of “your local courthouse” on February 5 or the following day.

Other events known to be planned for the weekend include:

Rallies and protests even further in the future are also scheduled—likely to be merely the first of many. These include:

It remains to be seen how successful the extreme right will be in elevating Finicum to the pantheon of extremists considered martyrs by the movement, or whether their attempts to use Finicum to rally support will be successful past the short term. The still-unresolved standoff in Malheur, with its four holdouts refusing to leave, also makes the future more uncertain. However, what is clear is that anti-government extremists are right now energetically trying to use Finicum’s death to rally support for their cause and this in itself is troubling.