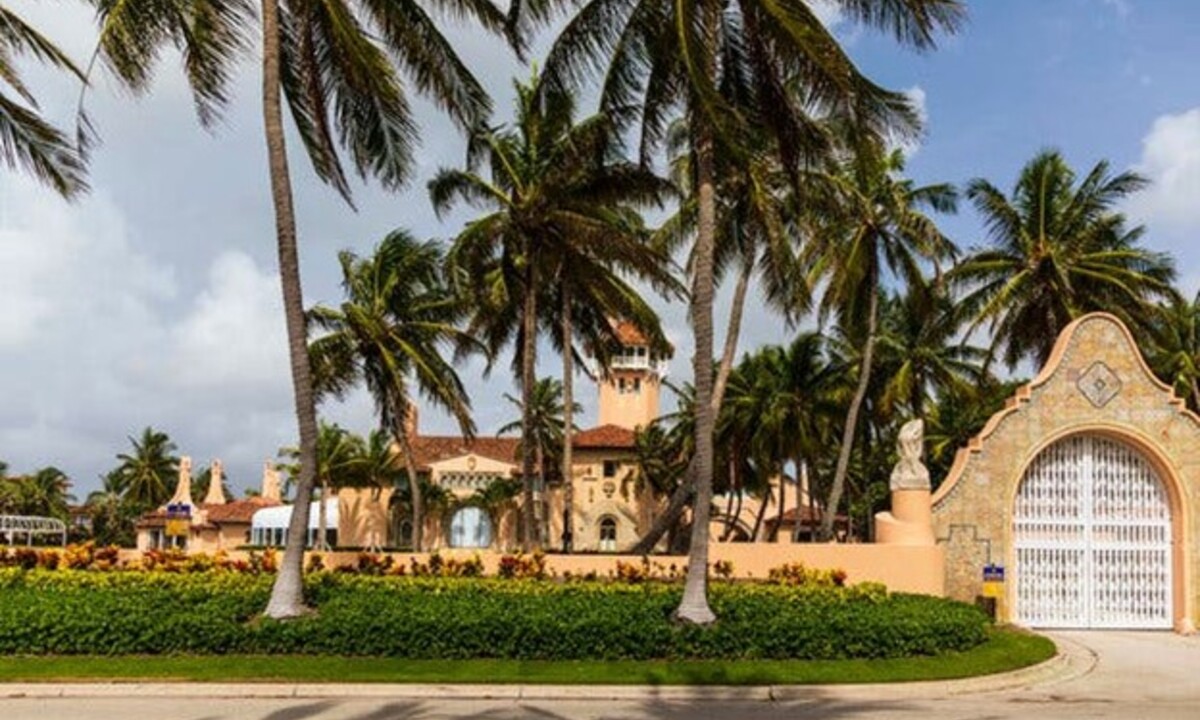 Firearms Remain the Weapons of Choice for Domestic Extremists

Adam Bies, a photographer from Mercer, PA, was arrested on August 12 for making violent threats against the FBI on Gab. While the threats appear to be in response to the FBI search of Mar-A-Lago, there is no evidence that Bies is an extreme supporter of former president Trump. Bies, who has expressed strong anti-government and anti-LGBTQ+ sentiments, does echo some QAnon rhetoric, claiming, for instance, that members of the federal government are “pedophiles.” According to court documents, Bies made several threats following the FBI search, including, “I sincerely believe that if you work for the FBI, then you deserve to DIE,” adding, “My only goal is to kill more of them [FBI agents] before I drop. I will not spend one second of my life in their custody.”

One week after the search at Mar-a-Lago, Center on Extremism researchers continue to see increased threats of violence and rhetoric targeting the FBI and the broader U.S. Department of Justice, as well as the magistrate judge who signed the search warrant.

The top trending hashtags on Truth Social, former president Trump’s social media platform, are #FBICorruption and #DefundtheFBI. On patriots.win, posters are talking about “dirty bombs” and giving FBI agents a “longer rope,” an allusion to suicide.

White supremacist Andrew Anglin is using the story to promote anti-government and antisemitic conspiracy theories, writing on the Daily Stormer that the FBI’s search of Mar-a-Lago means they “are laying the groundwork for mass NKVD style raids against random people from the internet,” referencing the Soviet secret police, and the “Democrat and Jew government has pulled the trigger and we’re going full Bolshevik.” 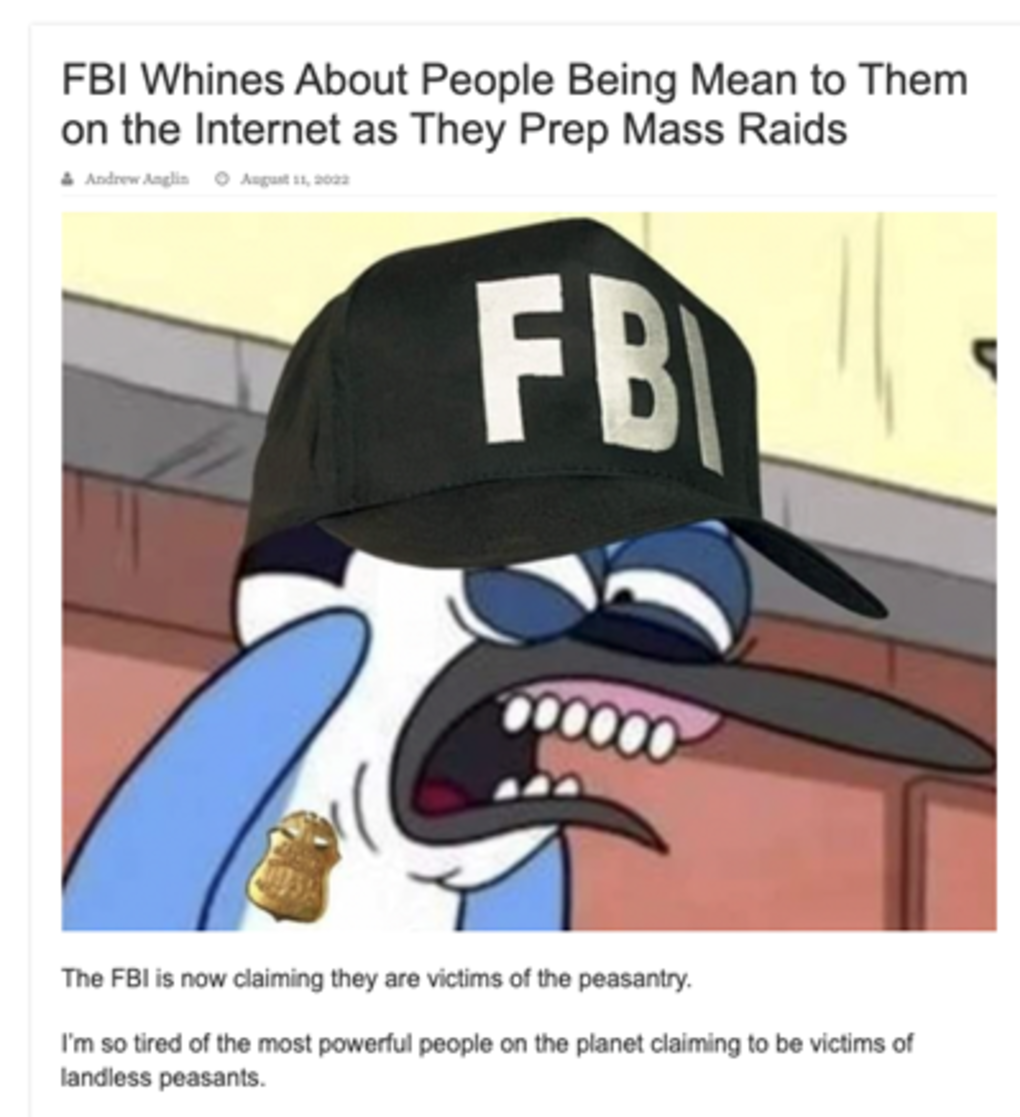 On 4chan’s /pol/ board there is extensive discussion about Judge Reinhart and his Florida synagogue, both of which are currently under the protection of law enforcement.  “You could remove every mortal jew [sic] from existence today but jewry [sic] will pop right back up,” one 4chan poster wrote about Reinhart. “You have to remove the demons, that is the fight of good vs evil.”

In the six days since federal agents searched Mar-a-Lago, the alarming rhetoric on the right has only increased in pitch and intensity. The FBI has been targeted at least twice, by a gunman in Cincinnati who took his own life after a standoff, and on Saturday, by a crowd of armed pro-Trump protesters who rallied outside the Phoenix FBI field office. No arrests were made at that event.

Ongoing responses to the search also include a barrage of violent and antisemitic threats leveled against U.S. Attorney General Merrick Garland, Bruce Reinhart, the Florida magistrate judge who signed the search warrant, and the FBI agents who conducted the search, as well as their families.

Some of the threats against Garland, who is Jewish, include explicitly antisemitic language; one commenter on a Qanon Telegram channel wrote: “Merrick garland is nothing more than a dime a dozen, two bit, bolshevik loving, America hating, obnoxious, radical leftist JEW!!!!!!”

“The same thing with that other scumbag Bruce Reinhard who signed the paper to raid Mar-a-lago. Another radical leftist JEW!! They suffer from an illness which is embedded in the DNA.  And this is why they have been kicked out of 109 countries throughout the centuries.”

The antisemitic vitriol targeting Reinhardt, which include death threats, prompted his synagogue to cancel its weekly Shabbat services. Law enforcement agencies are aware of the threats against the judge and are providing additional security.

More broadly, the Justice Department and FBI are favorite targets of the extremist supporters of former president Trump.

The FBI agents who conducted last Monday’s search have been subjected to doxxing campaigns, some of which have included the names of and identifying information about their family members.

U.S. Rep Eric Swalwell, who was not involved in the search, reported a threatening voice mail, received after the Mar-a-Lago action, in which the caller said, “I hope someone cuts that motherfucker’s throat from ear to ear. Cut his fucking head off. Swalwell's a worthless piece of shit. Cut his wife's head off, cut his kids' heads off. I don't give a fuck.”

As soon as news broke about the August 8, 2022, FBI search of Mar-a-Lago, indignant and angry cries erupted from radical supporters of former President Trump and a range of right-wing extremists. Much of the commentary included implicit and explicit calls for violence.

Reactions were markedly similar across extremist and “non-extremist” platforms, which included bold-faced political names. The language from public officials was slightly more measured, but the points made were uniform: The search was illegal (even though the warrant was signed by a federal judge); the search shows the politicization of the Department of Justice (even though the FBI director was appointed by Trump); and, finally: this is the sign everyone has been has been waiting for to start a “war” – this can be read to mean legislative, political, legal or violent, depending on the author of the comment and accompanying text.

Right-wing elected officials and public figures have both implicitly and explicitly referred to an impending “civil war” following the search of Trump’s Florida home.

In her response to the FBI action, U.S. Rep Marjorie Taylor Greene (R-GA) wrote on Instagram: "The DOJ and FBI just declared war on every Republican in America. The FBI is raiding President Trump's home in Mar-a-Lago! This is the rogue behavior of communist countries, NOT the United States of America!!! These are the type of things that happen in countries during civil war. The political persecution MUST STOP!!" 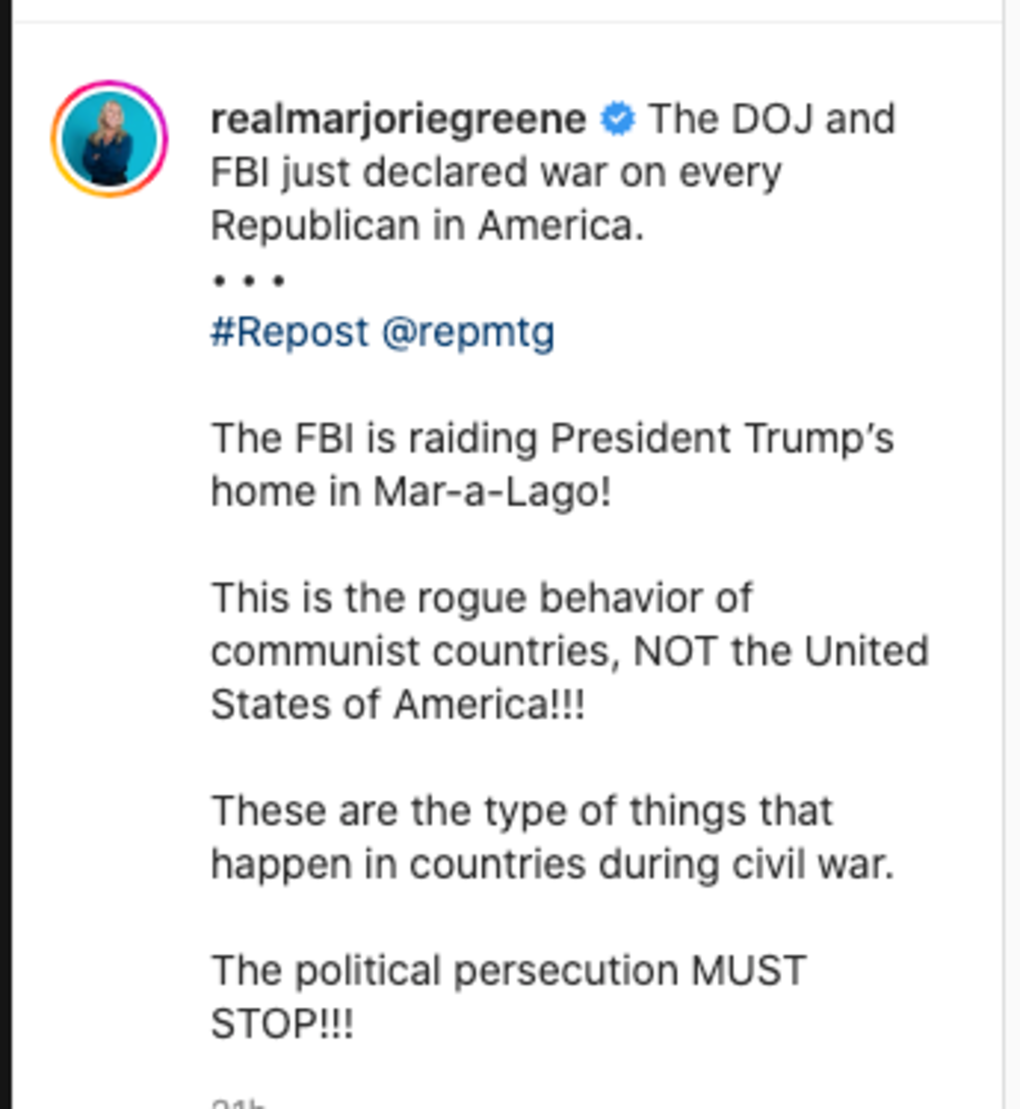 U.S. Rep Paul Gosar (R-AZ) issued a threat against the FBI, tweeting, “The FBI raid on Trump's home tells us one thing. Failure is not an option. We must destroy the FBI. We must save America. I stand with Donald J. Trump.”

Meanwhile, U.S. Rep Lauren Boebert (R-CO) asked her followers to “take a stand,” tweeting: “This #DepartmentOfInjustice must be held accountable. It was President Trump today, but it’s you next if we don’t take a stand.

The New York Young Republicans issued a fiery statement, calling for the “suspension of the writ of Habeas Corpus,” an extraordinary measure that is to be used to protect public safety in times of rebellion or invasion. The statement read, in part: “The New York Young Republican Club… calls for more action than just ’voting out’ any Democrat or Republican perpetrating the anti-American interests surrounding any of these matters. Anyone involved in the listed political persecutions should be arrested and prosecuted with expediency, and in cases of extreme undue resistance, we recommend consideration of the suspension of the writ of Habeas Corpus to secure our Republic from the insidious monsters that have wrenched it from the American People’s control.”

Right-wing influencer Juanita Broaddrick posted a prediction to Trump social media platform Truth Social: “Civil War was trending on Twitter with people wondering if it will happen. It has already begun.... except for the shooting.”

The former president’s most ardent supporters were out in force on a range of social media platforms, including Trump’s own Truth Social, where comments included, “Can we just do this Civil War thing already,” “It’s time to start hunting them in return,” and “Patriots!!! Arm yourselves! We are about to enter into Civil War!”

Another Truth Social user wrote: “Fuck the Feds! The Second Amendment is not about shooting deer! Lock and load! MAGA! Trump 2024!”

On the far-right, pro-Trump patriots.win forum, formerly known as thedonald.win, violence was a common thread. One poster wrote: “There comes a time when the call for peace must cease because peace does not end evil and we all know this. I think we are all just about prepared for the ‘ask’ because we are just about over the line where good men need to do bad things.”

Another commented, “When does the shooting start? Fuck. I have two guns I haven’t cleaned since the last trip to the range. Do I have time?” The poster followed up, “Just make sure your mags are loaded and you’re ready. It’s close. Remember that your neighbors are not the ones controlling this.”

One patriots.win poster directed their ire at a range of specific targets, commenting, “Well the members of the local city and county boards as well as the local media should absolutely be targeted by every patriot.”

Gab users responded enthusiastically to U.S. Rep Paul Gosar’s comments, which he cross-posted on Gab and Twitter. One poster wrote, in a response: “Can we hang America's traitors, now?!” Another Gab user posted: “When do we get to use our guns and kill these people. Praying that we have more men like this one as we are going to need them. The ‘government’ is not going to save us this duty will fall onto the American People our veterans and military men.”

On a Telegram channel linked to white supremacist America First adherents, a video post showed an individual speaking directly to Trump as he held an assault rifle, which he pointed at the camera multiple times. “You got some motherfucking soldiers…right on your side.”

Response from the QAnon community has run the gamut, but most have avoided open calls for violence and/or civil war, because, they theorize, civil war and violence are what the Deep State “wants.” Posts are urging followers to “Trust the Plan” and have faith that Trump and his allies are still in control.

One QAnon follower posted to Telegram: “The cabal is begging for a civil war to distract us. It won't work. We are not violent citizens who attack. We are law abiding citizens who defend. Theres a difference. Major difference. We don't need violence to save our country we need Jesus and Gods rule of law. Amen [all sic].”

However, some QAnon adherents are tired of waiting and argue it’s time for "patriots” (QAnon term for conservatives) to stand up and prepare for future conflict.

A poster to an Oath Keeper forum on MeWe also warned of future violence: “If the Republicans loose the midterms because it was stolen and the Presidency in 2024 because it was stolen Jan 6th 2021 will look like a welcome committee for the liberals. It is time the tree of liberty be refreshed by the blood of tyrants [all sic].”