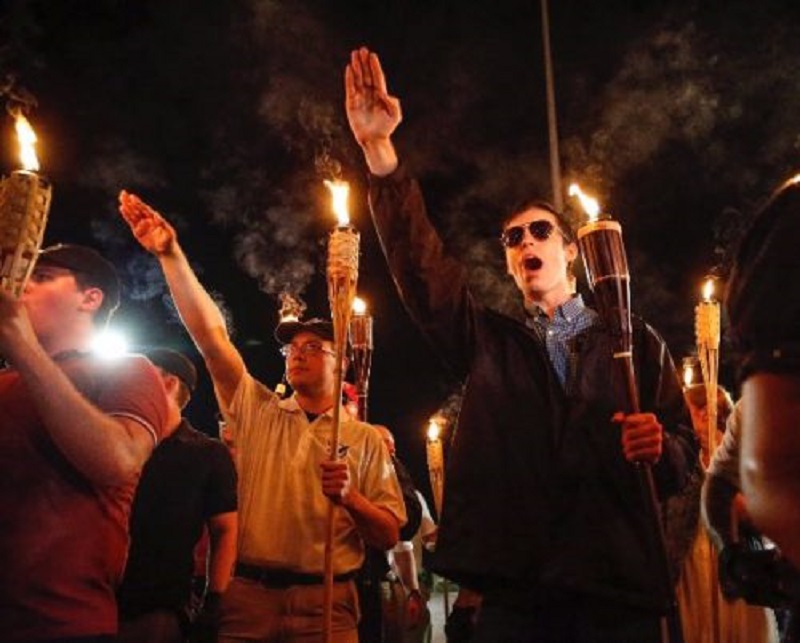 Anti-Semitic Incidents in the U.S. in the Wake of Charlottesville Rally

On August 11, 2017, the world watched in horror as hundreds of torch-wielding white supremacists descended on the University of Virginia’s bucolic campus, chanting, “Jews will not replace us!” The next day, the streets of Charlottesville exploded in violence, ringing with the hateful, racist shouts of the neo-Nazis, Klan members and alt right agitators who put aside their internecine differences to gather in an unprecedented show of unity. Their stated common cause: To protest the removal of a Confederate statue from a local park. Their true purpose: The preservation and celebration of the white race, at any cost.

The promise of Unite the Right brought white supremacists of all stripes together for a weekend of protest that turned to deadly violence, and left counter-protester Heather Heyer dead. The rally itself, which was organized primarily by Jason Kessler, an alt right activist with ties to notorious racist Richard Spencer, never actually happened. Instead, local and state police converged on the chaotic scene, urging everyone off the streets and away from the parks. Virginia Gov. Terry McAuliffe declared a state of emergency, and white supremacist leaders, from Richard Spencer to David Duke, while bemoaning the lost opportunity to address the crowd, declared the event an overall victory.

But was it a victory? Six months later, what’s happened to the far-flung and disparate groups that make up America’s white supremacist movement?

It’s been a period marked by seismic structural shifts and more than a few power struggles. Divisions have deepened, and the spirit of solidarity that animated the racist crowds in Charlottesville has long since dissipated. And yet, by some measures, evidence of white supremacist activism and engagement is more conspicuous than ever before.

Unite the Right was a highly unusual event, in that it brought together white supremacist groups that historically have avoided one another – people who belong to racist skinhead gangs like the Hammerskins don’t tend to hang out with clean-cut, khaki-wearing alt right types, or with members of the Klan (who showed up in Charlottesville without their robes).

Any harmony was short-lived: In the days immediately after Unite the Right, those divisions re-emerged, stronger than ever.

Today, there is a pointed division between “hard right” National Socialists and the American Nationalist contingent. It is worth noting that the groups share an identical goal – a white ethno-state – but disagree on the best path forward. For the foreseeable future, however, the differences will likely keep anything on the scale of Unite the Right from happening again.

The National Socialist segment of the movement, which includes the Traditionalist Worker Party, the National Socialist Movement and Vanguard America, wants to secede from the United States to form a National Socialist ethno-state. Optics are important; they frown on swastikas and Klan robes, and encourage members to wear black military-style gear. Events tend to feature Confederate flags, as well as the flags of the various contingents. These groups are allied with The League of the South, a southern nationalist group whose members want to establish an all-white South.

The American Nationalists, including Patriot Front, Identity Evropa, Daily Stormer followers and the Rise Above Movement (RAM), are not interested in seceding, and instead want to reclaim the American government for their own purposes – the eventual creation of a white ethno-state. They make an effort to dress in a clean-cut way that appeals to mainstream America, often wearing polo shirts and khakis.

You could refer to these two groups as the hard right and the alt right, respectively, but it’s not quite that neat and tidy. There is some crossover, and some have demonstrated a willingness to work with the “other side.”

A few examples of this type of cooperative effort between disparate factions:

Unite the Right showed America – and the world – that hundreds of white men were willing to show their faces in broad daylight as they chanted racist and anti-Semitic slogans. And in the days and weeks that followed, a number of white supremacists who were on the ground in Charlottesville learned that actions have consequences.  This was the inevitable fallout of a movement moving from the virtual world to the real world, but it seems that some Unite the Right participants were unprepared for the blowback.

Some lost their jobs or were ostracized at school after they were identified in photographs of angry tiki torch marchers, or other photos from the event. Neo-Nazi website The Daily Stormer, which posted a derogatory story about murdered counter-protester Heather Heyer, was dropped by web hosting company GoDaddy.

White supremacists were doxxed, their identifying information shared with the world. A Twitter account called @YesYoureRacist called on members of the public to help “out” Unite the Right attendees, with some success.

Despite the discord that emerged in its wake, Unite the Right did establish common ground among participants, and six months later, white supremacists of all types not only organize their own events, they also show up at protests and marches organized by other groups. These gatherings tend to be small, attracting less than two dozen people.

Among the issues that inspire them to collective action:

The violence at Unite the Right followed an unusually violent spring and early summer, marked by the proliferation of “street fighting” tactics – and a variety of offensive and defensive gear. A significant number of white supremacists and militia members came to the Unite the Right rally openly carrying firearms.

But in the months following Unite the Right, some white supremacist groups have embraced the “fight club” mentality, most notably the Rise Above Movement (RAM). Patriot Front and Atomwaffen Division also demonstrate an escalating propensity for street fighting and other forms of violence. Violent language continues to be a mainstay of white supremacist message boards. Atomwaffen Division, in particular, is using Charlottesville as a rallying cry for an all-out race war and has since issued a propaganda video of members firing guns and screaming “gas the kikes” and “race war now.”

Among the violent incidents in the six months following Unite the Right:

While public displays of violence – and violent language – has increased in some segments of the white supremacist population, a number of groups are making a concerted effort to tone down their public messaging, avoiding physical confrontations and any identifiably “white supremacist” logos or symbols. They’re planning “under the radar” events – making unannounced appearances in the form of flash mobs or torch marches.  This dramatically limits white supremacists’ interactions with counter-protesters, undercutting the potential for violence.

Meanwhile, infighting within the white supremacist movement has diminished the potential for large rallies and events – the types of gatherings that typically attract counter-protesters who may be more prone to violence.

And finally, since Unite the Right, law enforcement departments across the country have gotten much better at planning for potentially violent events and controlling opposing crowds.

While the public fallout from Unite the Right may have dissuaded many white supremacists from attending major public gatherings, it seems to have energized the contingent that distributes racist literature on college campuses. These are target-rich environments for white supremacists, who are always trying to recruit new members, and who view increasingly diverse and inclusive campuses as anathema to their racist goals.

Since September 2016, the Center on Extremism has recorded at least 354 cases of white supremacist fliering on college campuses nationwide.  More than 160 of those incidents took place after the Unite the Right rally.

Matthew Heimbach launches his “National Socialism or Death” college speaking tour in mid-February at the University of Tennessee’s Knoxville campus.

Meanwhile, Richard Spencer continues his speaking tour at public universities. After an October 2017 speech at the University of Florida, Spencer booked an appearance at Michigan State University in March. He’s also hoping to hold an event at Kent State University on May 4, the 48th anniversary of the murder of four students there by National Guardsmen.

Each of Spencer’s proposed on-campus appearances has sparked arguments between his supporters, who say any attempt to stop the speech violates their First Amendment rights, and those who believe Spencer’s presence increases the risk of violence on campus. Spencer, predictably, seems delighted by the uproar, and uses the publicity to promote his favorite cause – himself.

After Unite the Right, tech companies launched a concerted effort to remove white supremacist individuals and groups from widely used social media platforms (Twitter, Facebook) and crowdfunding sites (GoFundMe). In many cases, this meant the companies only had to enforce their existing terms of service, but in others, those terms needed to be tweaked. Some tech companies, wary of charges of censorship, had previously resisted removing problematic content.

Among the high-profile sites and platforms that reacted swiftly to the events in Charlottesville:

This expulsion resulted in a mass migration of white supremacist activity from “mainstream” websites to less rigorously monitored platforms like GAB and Voat.  These sites were already popular with fringe groups before August 12, and increased scrutiny from Twitter and others made the less regulated platforms even more attractive.