The small group of white supremacists gathered to voice their anger at the ADL for a multitude of perceived slights including not labeling the Black Lives Matter movement a hate group. In early September, the ADL published an article describing “White Lives Matter” as a small network of hardcore white supremacists with connections to a variety of hate groups. The small group was met by more than 50 counter-protesters, holding up signs declaring, “black lives matter” and “white lives have always mattered.” Members of Black Lives Matter Houston were on hand, but not to support ADL . The BLM chapter announced pointedly on social media that they would attend the counter-protest to help “destroy white supremacy,” and not as an advocate for ADL, which BLM continued to criticize for its “colonist, zionist (sic) attitude toward our Palestinian friends or their ill will towards the BLM movement.”

Among the chief organizers of the WLM rally is Ken Reed, a longtime member, leader, activist and spokesperson for the Aryan Renaissance Society, a small but established neo-Nazi group. Reed has recently returned to Texas after a stint in Rhode Island. A number of other known white supremacists actively promoted the event, including Kenneth Zrallack and Horace Scott Lacy, a known felon and member the Aryan Circle, a dangerous, Texas-based white supremacist gang.

In the weeks and days leading up to the protest, WLM organizers and supporters produced a number of YouTube videos ginning up protesters and preparing them for the possibility of violent confrontation. While organizers like Reed publicly urged a degree of decorum, many of the messages on the WLM Facebook event page called openly for violence against counter-protesters. “Alright black lives splatter were comin so ya know what that meens (sic) gonna be a lot of stomping to do get ready,” one poster commented.

The ARS’s Reed posted videos advising viewers on ways to make the counter-protesters look like the aggressors, while a female ARS supporter, who carried an assault rifle during Saturday’s protest, suggested wearing cargo pants for “easy access to weapons.” Both exhorted WLM supporters to translate their vocal online support into real world action. They got a boost online from David Duke, the former Klan member and current U.S. Senate candidate, who circulated the event flier on his Facebook page, and urged his supporters to “stand up to these ‘cultural Marxist’ (sic) trying to bring down America!” 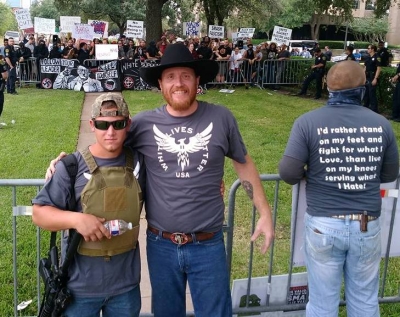 As is typical for events organized by the still amorphous White Lives Matter movement, the two dozen or so rally attendees represented a cross-section of white supremacist groups. The majority were members and associates of the Texas-based Aryan Renaissance Society while a handful of people (one or so per group) represented the Traditionalist Workers Party, the National Socialist Movement, the Teutonic Church of Jesus Christ, and American Front.

Many of the protesters wore “White Lives Matter II” t-shirts that bore the ARS phoenix symbol on the front and “I’d rather stand of my feet and fight for what I love, than live on my knees serving what I hate on the back.”

Despite organizers’ concerted efforts to attract a broad coalition of white supremacists, their presence was negligible.