Some Glorify, Others Excuse Palestinian Terror Against Israelis 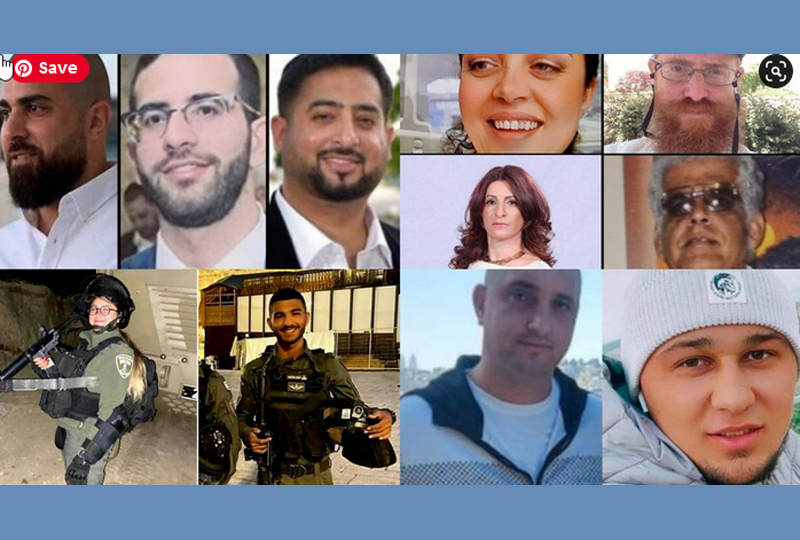 Since March 22, 2022, there have been four major terrorist attacks across Israel– Be’er Sheva, Hadera, Bnai Brak and Tel-Aviv – which resulted in 14 deaths and many wounded. The attacks, which were carried out by both Palestinian residents of the West Bank and Arab citizens of Israel, targeted both Israeli civilians and law enforcement officials. These incidents coincided with the Muslim holy month of Ramadan, which is generally a time of heightened tensions in the region.

While many have condemned the attacks, including notably the governments of several Arab states, the Palestinian Authority, and the head of the Islamist Ra’am political party in Israel, some anti-Israel voices have used the attacks as an opportunity to justify, support and even glorify terror against Israeli civilians on social media. Others excused it as a legitimate reaction to Israeli actions, placing the blame exclusively on the Jewish state while describing the terrorism as a legitimate form of “resistance.”

Leila Khaled, an active leader of the US-designated terror organization the Popular Front for the Liberation of Palestine, tweeted in response to the Israeli Defense Forces activity in the West Bank city of Jenin: “Jenin responded to the Arabs who normalize and the security coordination [between the Palestinian Authority and Israel]. Jenin embraces its martyrs and is loftier than the defeated ones. The crown of Palestine is raised by Diyaa [Khamarshe, who carried out the Bnei Brak terror attack], Raed [Hazem, who carried out the Tel Aviv terror attack], Abu al-Qiy’an [the terrorist who carried out the Be’er Sheva terror attack] and Ibrahim and Ayman Ighbariyya [the terrorists who carried out the Hedera attack]. The defeated ones shall leave.” Following the posting of Khaled’s tweet, ADL notified Twitter regarding her presence on the platform, which resulted in Twitter taking down her account. 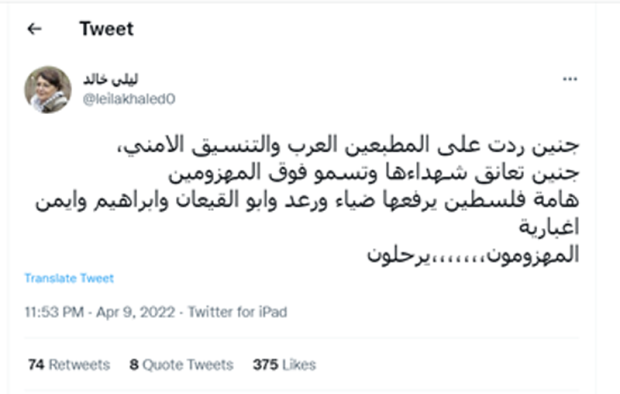 Adalah Justice further placed the onus on Israel, saying that “It is important to recognize that the violence of the oppressed is always a response to state-sanctioned violence. Ending it is the responsibility of those in power.” 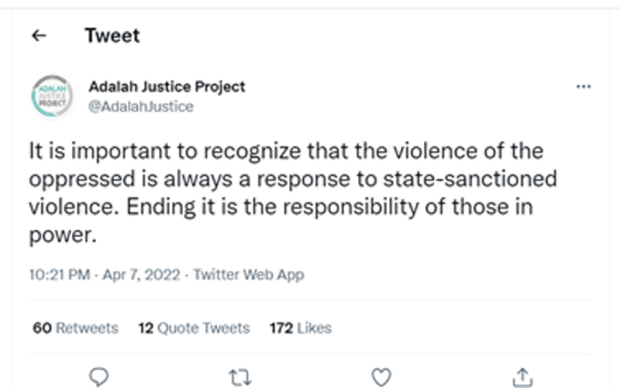 The anti-Zionist group Jewish Voice for Peace tweeted: “We must contextualize these attacks within the decades of systemic violence Palestinians have endured. Both historically and *as we speak*, Israel forcibly displaces, imprisons, tortures, and kills Palestinians with a disproportionately powerful state and a US-funded military.” 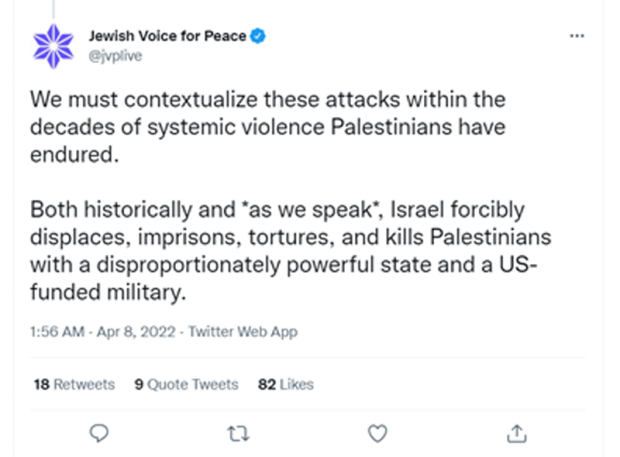 Activist Zellie Imani re-posted his 2021 tweet thread calling to end Israel’s existence as the solution to violence: “And as the apartheid state grows, the violence experienced by the colonized grows. To end the violence then, is not a cease-fire, but the cease to the existence of the apartheid settler state of Israel. Free the land. Free Palestine.” 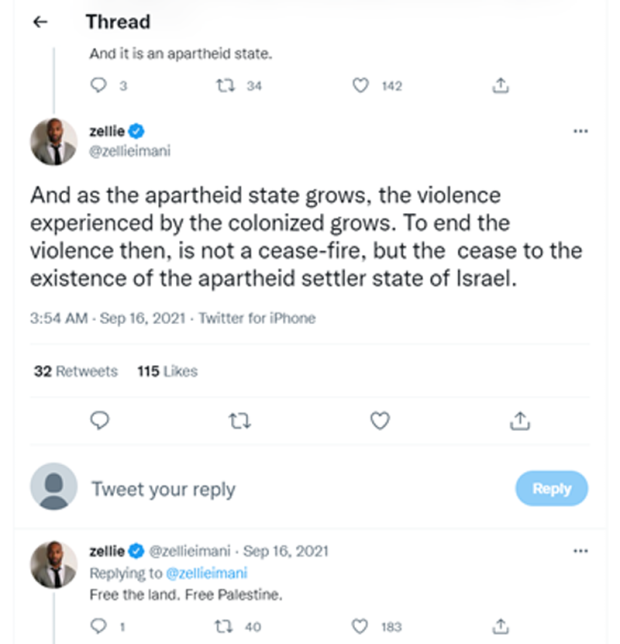 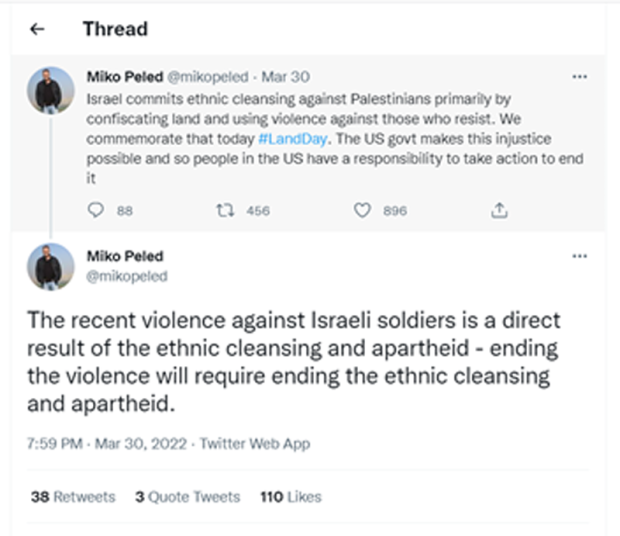 Commenting on a condemnation of the Tel-Aviv terror attack by the EU Ambassador to Israel, Ali Abunimah, founder of the anti-Israel Electronic Intifada website, categorized Palestinian terrorism as being the “reaction of the oppressed,” tweeting: “Those who want end to bloodshed should work to end Israel's barbaric regime of occupation, settler-colonialism and apartheid. To be complicit in the occupier's massive violence and condemn only the reaction of the oppressed is to sentence more Israelis and Palestinians to die.” 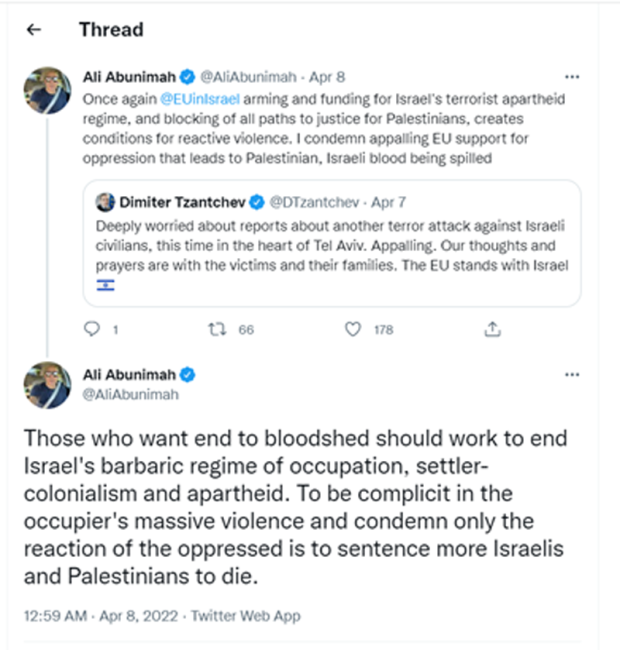 The New York City-based social justice group DecolonizeThisPlace re-tweeted posts purporting to show video of the terrorist Raed Hazem, who carried out the attack in Tel Aviv. The posts refer to him as a “martyr” and say in Arabic: “The Weapon is a man’s decoration.” 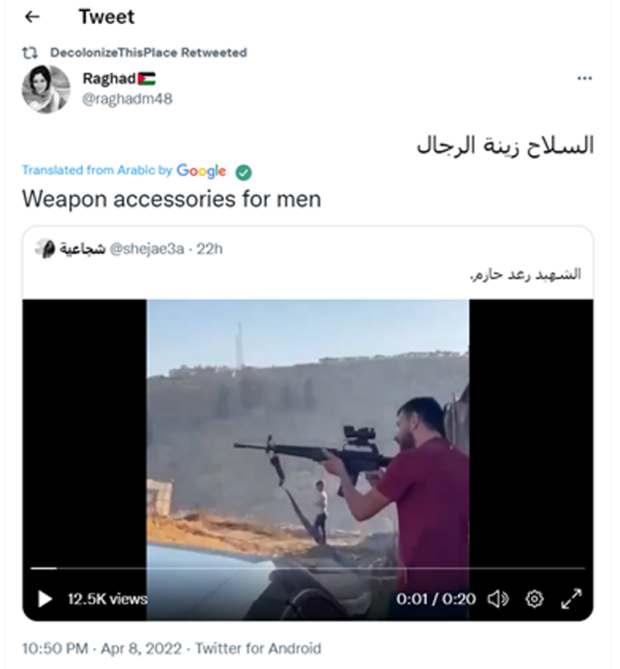 Anti-Israel activist and poet Remi Kanazi tweeted: “You shouldn't find the reactions to settler colonialism pleasant. They are often unpleasant, especially to colonizers. But it doesn't change the simple fact that there is a system of theft and relentless violence in place that elevates a settler population over a native people.” 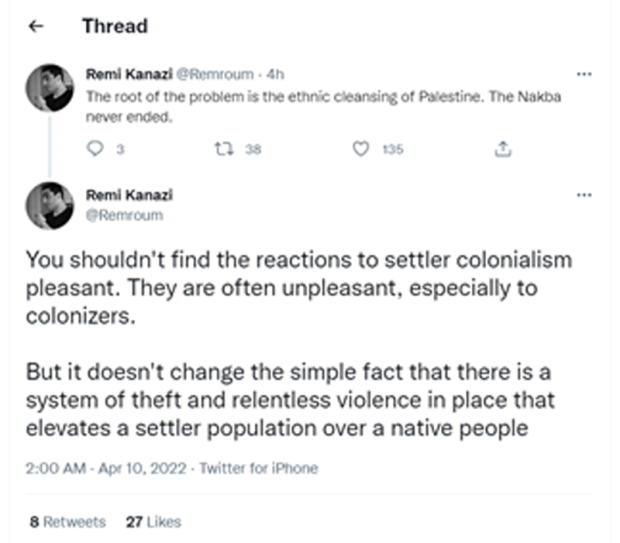 The anti-Israel organization Palestinian Youth Movement framed the terror attacks as acts of resistance, writing on Facebook: “As the occupation intensifies its effort to crack down on Palestinian resistance, we remain steadfast in our determination to liberate Palestine from the river to sea. Eternal glory to each and every one of our martyrs.” 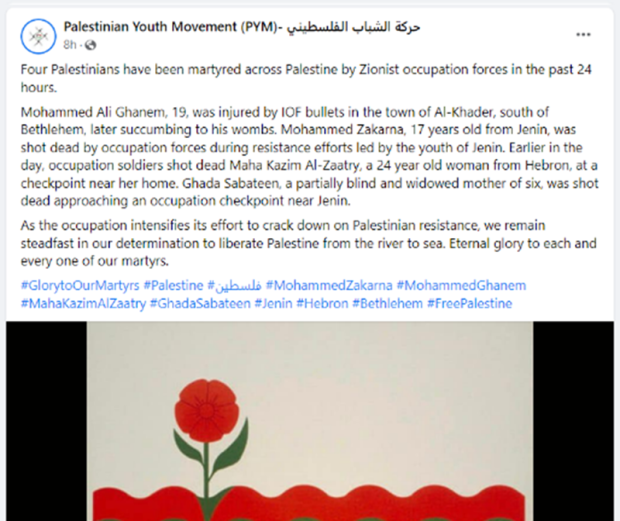 The pro-Palestinian Institute for Middle East Understanding (IMEU) posted on Instagram that “Israel’s oppression and colonialism are the root of all violence.” 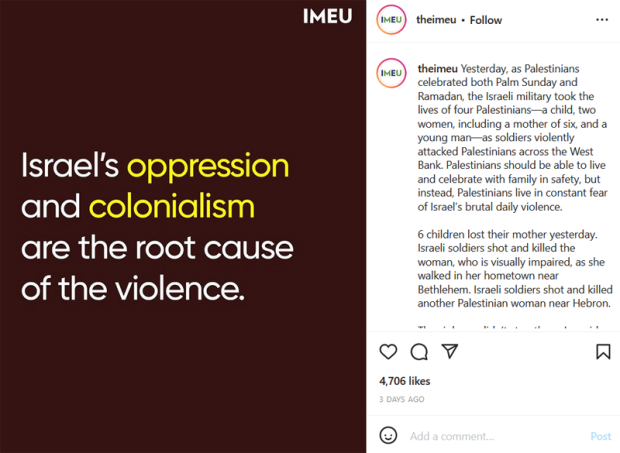