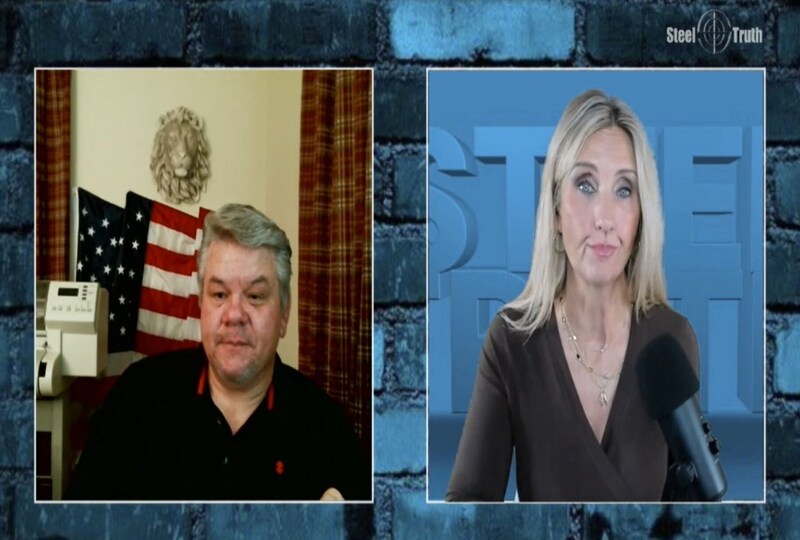 More than a year after Q’s final post and the January 6 insurrection at the U.S. Capitol in Washington, D.C., a small but growing number of QAnon adherents are openly embracing the beliefs of the anti-government extremist sovereign citizen movement.

From October 2017 until December 2020, QAnon adherents anxiously awaited messages from “Q,” an anonymous figure whose posts on 4Chan and 8Chan purportedly revealed secrets about the “Deep State” actors who secretly control the U.S. government and how Donald Trump would bring these individuals to justice. Despite Q’s numerous failed prophecies and Trump’s unsuccessful attempts to overturn the 2020 election results, many QAnon followers still brace themselves for the restoration of the “Republic” that will come when Trump ultimately returns to the presidency and subsequently takes down the “Deep State.” However, the silence of Q has made some QAnon adherents more receptive to other fringe voices and conspiracy theories, including the sovereign citizen movement.

The sovereign citizen movement is a 50-year-old anti-government movement whose adherents believe in a conspiracy theory that in the 19th century, a shadowy group of conspirators began infiltrating the original, lawful government and subverted it into an illegitimate and tyrannical de facto government that’s been using secret contracts to enslave all Americans. Sovereigns claim that people can in effect “divorce” themselves from this illegitimate government, which thereafter has no jurisdiction or authority over them. Sovereign citizen gurus use pseudolegal language to teach followers their theories and tactics. The movement has become known for its “paper terrorism” harassing tactics, for scams and frauds, and for violence ranging from armed standoffs to shootouts to acts of terrorism.

The conspiratorial anti-government views of the sovereign citizen movement mesh well with QAnon followers’ belief that the current Biden administration is illegitimate. One person who has actively merged these views is Bobby Lawrence, a sovereign citizen guru based in Pennsylvania who ran unsuccessfully for U.S. Senate in 2018. Over the course of 2021, he has forged close ties with QAnon influencers, especially conspiracy theorist Ann Vandersteel and the husband-and-wife couple Allen and Francine Fosdick, hosts of the QAnon show, Up Front in the Prophetic.

Ann Vandersteel, a right-wing conspiracy theorist who has championed QAnon and the widely debunked “Pizzagate” conspiracy theory, began working with Bobby Lawrence to “correct” her citizenship status in July 2021. Sovereign citizens believe that by filing a series of pseudolegal documents, one can opt out of the so-called “Fourteenth Amendment citizenship” that the government created to control them and “regain” their sovereign status, becoming immune to the laws and authority of the illegitimate federal government. On January 9, Vandersteel announced on Telegram to her 38,000 followers that she had completed the process and had officially become an “American State National.” Vandersteel has promoted Lawrence’s work repeatedly throughout the latter half of 2021, and Lawrence appeared on her show, SteelTruth, in June and July 2021, where he discussed how to become an American State National.

More recently, Vandersteel discussed the importance of becoming an American State National during her appearances at Clay Clark’s Reawaken America tour stops in San Antonio and Dallas in November and December 2021, telling the audience during her November speech, “When you become an American State National, you're now giving, saying, I don't want the privileges of being a citizen of the United States. I want to be a resident alien national in this country, part of the constitutional republic from which this country was founded. I'm taking back my rights as a free people not to be privileged to live under the United States federal bureaucracy.”

Vandersteel also encouraged listeners to look into the works of Bobby Lawrence and David Straight, another popular sovereign citizen guru, during her speeches. Following the Reawaken America conference in November, former general and Trump administration official Michael Flynn, who has embraced the QAnon movement, shared a link to Vandersteel’s speech on Telegram, writing that, “this is a superb education on our rights.” 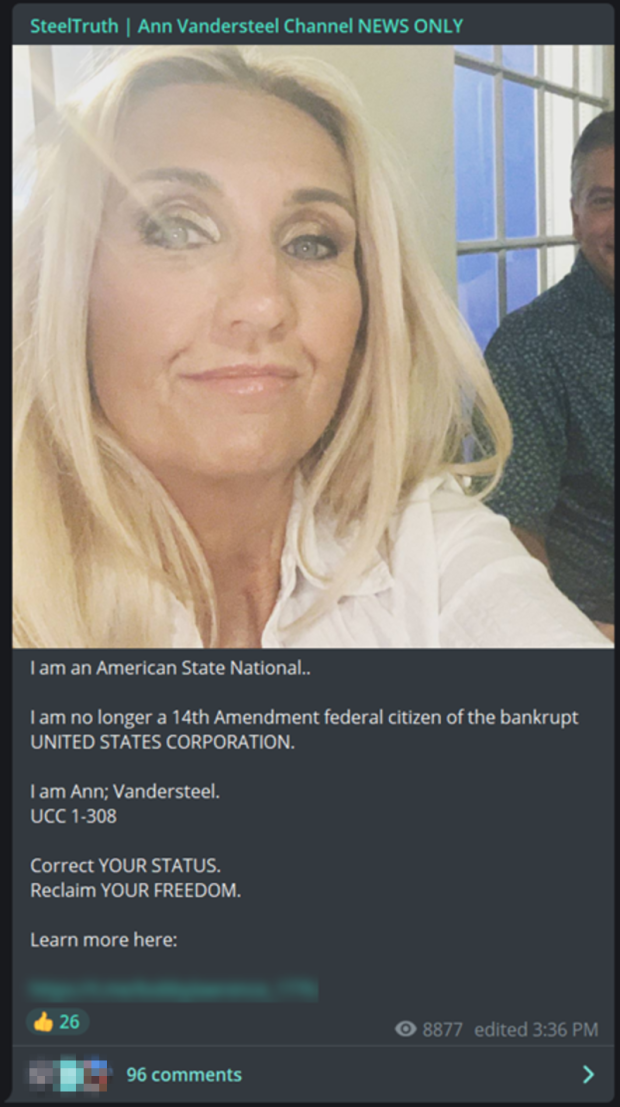 On January 9, Ann Vandersteel posted to Telegram that she was officially an “American State National.” Source: Telegram

Vandersteel isn’t the only QAnon conspiracy theorist connected to Lawrence. Since September 2021, Lawrence and Allen and Francine Fosdick, the Pennsylvania-based hosts of the QAnon show Up Front in the Prophetic, have co-hosted four “State National” seminars with Lawrence, with a fifth one planned for February 2022 in North Carolina. During these seminars, which have averaged around 50 attendees each, Lawrence taught audience members about the importance of becoming an “American State National” and how to do so.

Sovereign citizen guru David Straight also spoke at a seminar that the Fosdicks and Lawrence co-hosted in Pennsylvania in December 2021. Lawrence appeared on the Fosdick’s show three times in 2021, where he reiterated the importance of becoming an American State National and peddled various conspiracy theories about Trump still being president. 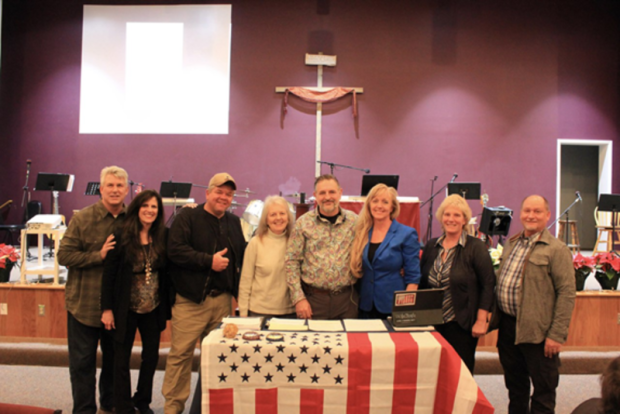 From L to R: Allen and Francine Fosdick, hosts of the QAnon show Up Front in the Prophetic; sovereign citizen guru Bobby Lawrence and his wife, Teah; sovereign citizen guru David Straight and his wife, Bonnie; and Elena and Jim Murphy, friends of the Fosdicks, at a December 2021 “State National” seminar in Fairfield, Pennsylvania. The “Civil Peace” flag draped over the table is a fictious flag commonly used by sovereign citizens, who think it is the original and legitimate flag of the United States. Source: Telegram

Sovereign citizen beliefs have also seeped into the broader QAnon community. Unable to accept  President Biden’s inauguration in January 2021, some QAnon adherents began promoting a sovereign citizen-linked conspiracy theory that former president Donald Trump would return to power on March 4, 2021, succeeding former president Ulysses S. Grant as the 19th president of the United States. Many sovereign citizens believe an 1871 law turned the United States into a “corporation,” rendering every president and law passed since then as illegitimate. The ratification of the 20th Amendment in 1933 changed the date of the presidential inauguration from March 4 to January 20.

More recently, during a Telegram voice chat hosted by QAnon influencer John Sabal (“QAnon John”) on December 17, 2021, disgraced attorney Lin Wood, who has openly embraced QAnon conspiracy theories, invoked a sovereign citizen-linked claim about the U.S. “corporation” tinged with antisemitic beliefs about the banking system. “From a legal standpoint, the United States of America is a corporation, and we were born as assets of the corporation. And then after they took us over, they imposed an income tax on us,” Wood told listeners in response to a question asking if the U.S. is a corporation. “I'd like to think that there's a bankruptcy that's either been filed or will be filed, that will relieve us of all this artificial debt that we have incurred from the Rothschild banking industry and the Federal Reserve System.” Wood’s “born as assets” statement may be a reference to the common sovereign citizen belief that the government has converted American birth certificates to stock certificates to pay debts to international bankers.