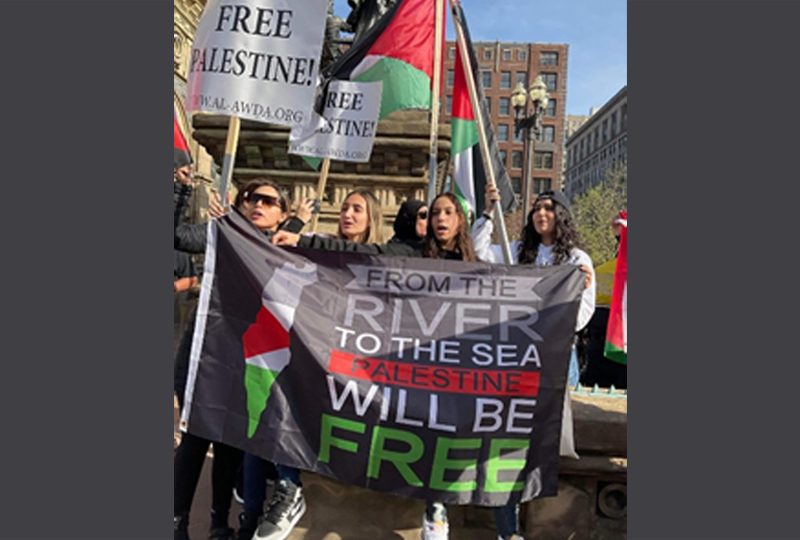 The annual day of anti-Israel activism was originally conceived by the leader of the 1979 Iranian Revolution and Supreme Leader Ayatollah Khomeini and is marked by demonstrations around the world. As has been the case for several years, attendance ranged from approximately a dozen to 100 people at rallies in New York City, Dearborn, Cleveland, Chicago and Washington, D.C.

The most shocking and egregious language was espoused at a rally in midtown Manhattan in New York City.

Attorney Lamis Deek, an anti-Israel activist with the pro-Palestinian group Al-Awda, made explicit remarks in support of U.S. State Department-designated terror groups, including Hamas, Islamic Jihad, Iran’s Qods Force and the Popular Front for the Liberation of Palestine (PFLP), and suggested that Israel is a “global threat” and the “mobilizer of the world global machine” engaging in wanton killing “from Sudan to Guatemala:”

Anti-Israel activist and journalist Joe Catron echoed Deek, declaring that “national leaders like Ahmad Sa’adat, General Secretary of the Popular Front for the Liberation of Palestine...are part of the Palestinian resistance forces lighting the path for millions around the world today. They are the leaders of our struggle for the liberation of Palestine from the river to the sea.” He added that everyone should be inspired by “the brigades from Gaza to Jenin ready to strike in defense of al-Quds."

Nerdeen Kiswani, a Students for Justice in Palestine (SJP) activist who also leads the anti-Israel, New York City-based group Within Our Lifetime, expressed her opposition to an Israel trip taken by university presidents, including the CUNY president, by excoriating Zionists, declaring that listeners should “let them [the CUNY president and other trip-goers] know that those Zionists are not welcome in our city, and any person who wants to declare themselves a Zionist, whether they work at CUNY, whether they are a public official, we will demand their immediate resignation.” Such rhetoric demonizing and seeking to exclude “Zionists” from public spaces is an antisemitic attack on American Jews, a majority of whom view a connection with Israel, and support for its right to exist, as part of their Jewish religious, cultural and/or ethnic identities.

Dr. Raza Moosvi of Muslims United for Justice propagated the Khazar theory, which generally refers to the belief that many modern Jews descended from a people known as the Khazars—an Eastern European group that allegedly converted to Judaism in the eighth century. Some anti-Zionist activists instrumentalize this false claim to “prove” that Jews do not have a valid connection to the Land of Israel. Dr. Moosvi claimed that “Eastern European Jews that migrated to Israel...had Khazar blood, not Jewish and Middle Eastern blood, but Khazar.” He added that some “local Palestinians in fact had Jewish blood” and were the true descendants of ancient Israelites whom he claimed had converted to Islam.

Several members of the fringe, anti-Zionist ultra-Orthodox Jewish sect known as Neturei Karta were also in attendance. The group, which calls for Israel’s dismantling, regularly attends anti-Zionist events in New York City. A speaker representing the group declared to the crowd that “we do see the Zionist movement as the enemy of our people, our religion and almighty god...Zionism promotes cruelty and theft.”

Opposition to Israel’s legitimacy or existence appeared to be a common denominator across events. In Dearborn, a speaker referred to the “criminal, murderous, Zionist regime, this so-called state of Israel.” In Cleveland, an event was hosted by anti-Israel extremist Abbas Hamideh, who has expressed his support for Hezbollah and Hamas (both of which are committed to Israel’s violent destruction). A sign at the Cleveland rally included the slogan “From the river to the sea, Palestine will be free.” While some interpret this as a general plea for Palestinian rights and equality, many understand it as a call for Israel to be dismantled and replaced with a Palestinian state.