Survey of American Jews since Recent Violence in Israel 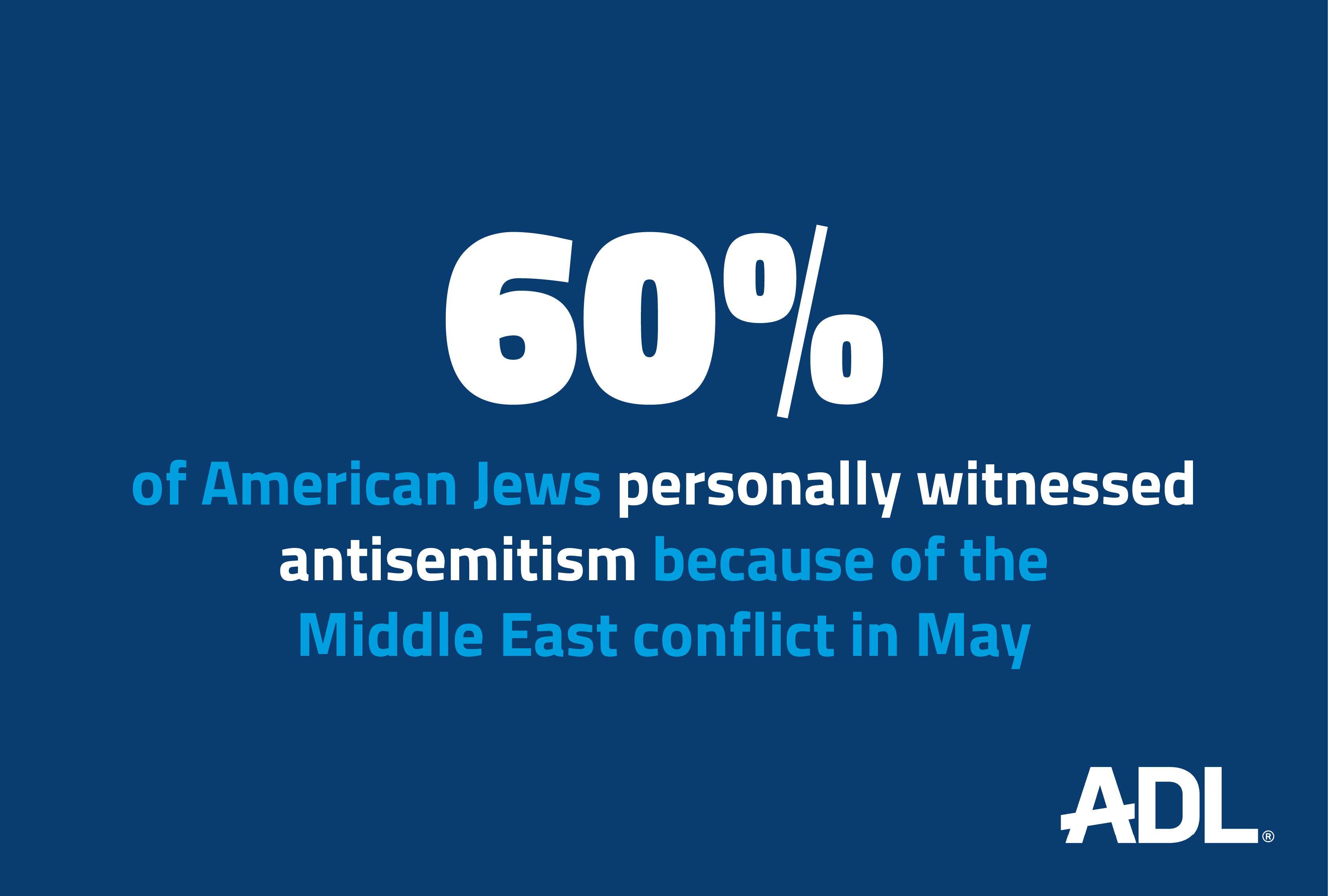 In the past month, the American Jewish community has been under increased threat of violence and harassment. Early data from ADL suggests antisemitic incidents have increased significantly, both online and offline, after the conflict between Israel and the Palestinians returned to the national spotlight.

We wanted to follow up on the survey we conducted earlier this year of Jewish Americans to learn about their experiences with antisemitism, online and off, to help determine whether those experiences changed following the recent violence in Israel that began on May 10, 2021. From May 25 to June 1, 2021, we polled a nationally representative sample of American Jewish adults on our behalf, asking questions about their recent experiences with antisemitism. Their responses indicate that American Jews have witnessed more antisemitic incidents, are concerned for their safety, and feel there is more that leaders should be doing to address this.

Increased Concern about Antisemitism and Safety 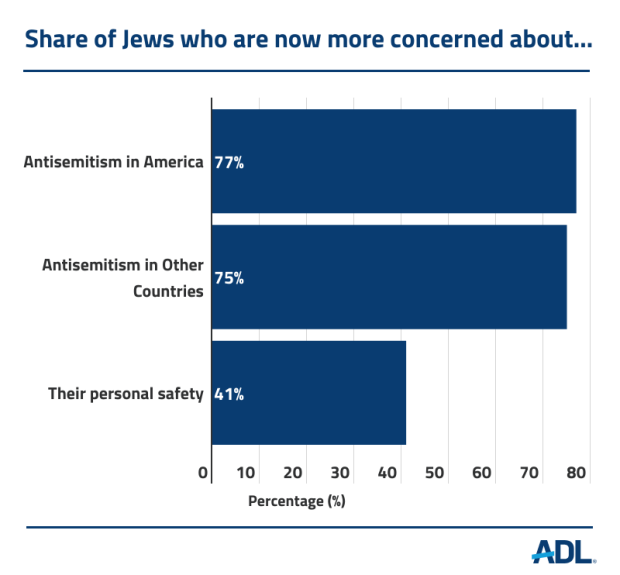 The Israel-Palestinian conflict gave rise to often-intense emotions among supporters on all sides, sometimes leading to harsh language. We asked American Jews to share their opinions on whether they consider certain types of statements or behaviors that have occasionally appeared at protests or online to be antisemitic. Two-thirds or more of American Jews considered the following to be definitely or probably antisemitic: saying that Israel should not exist as a Jewish state (75 percent); comparing Israel’s actions to those of the Nazis (70 percent); or protesting Israeli actions outside an American synagogue (67 percent). Calling Zionism racist (61 percent); calling for companies and organizations to boycott, divest from or sanction Israel (56 percent); or calling Israel an apartheid state (55 percent) are also considered by the majority of Jews to be definitely or probably antisemitic. 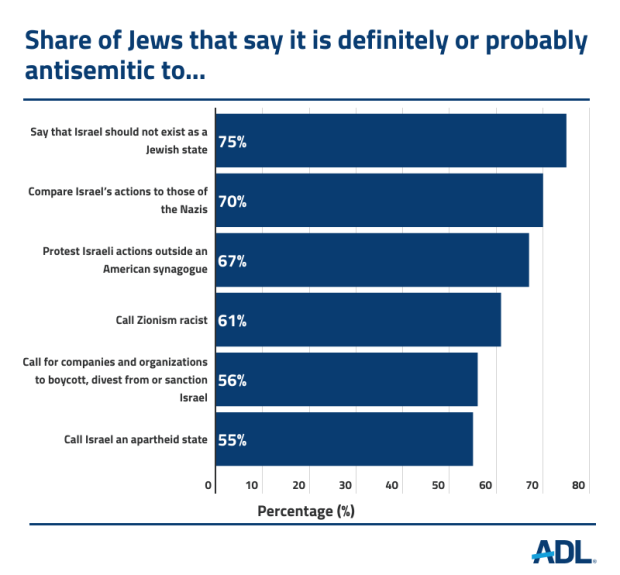 We also asked American Jews to what extent they think various groups have helped address recent antisemitism in America. The overall scores were fairly low. President Biden and his administration received the best marks, with 42% of Jews saying that actions from the Administration have greatly or somewhat helped. 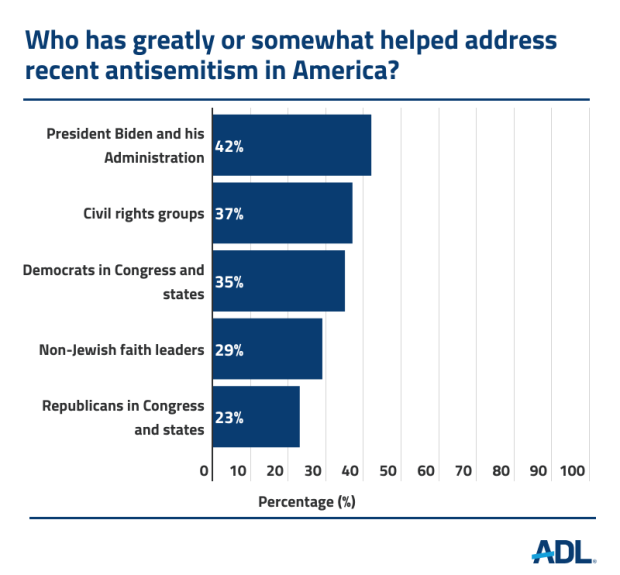 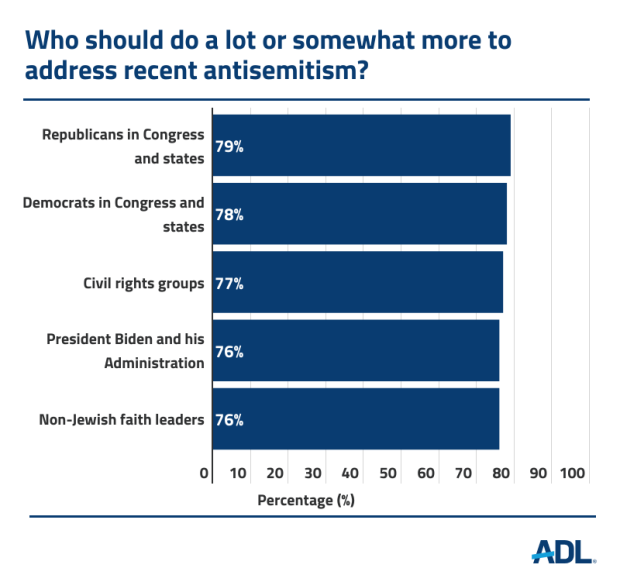 The survey was conducted by YouGov, a leading public opinion and data analytics firm, on behalf of ADL. The survey of Jewish American adults over the age of 18 (who were aware of the current conflict between Israel and Palestinians) was conducted online from May 25 through June 1, 2021. We asked about their experiences and perceptions since the recent violence in May between Israel and Palestinians. A total of 576 responses were collected from Jewish Americans, 18 and older, and weighted to reflect the demographic makeup of Jewish people across the United States, according to Pew Research Center. Participants are rewarded for general participation in YouGov surveys but were not directly rewarded for their participation in this survey. The margin of sampling error for the full sample of respondents is plus or minus 4 percentage points.

ADL gratefully acknowledges the ADL Lewy Family Institute for Combating Antisemitism for its sustained support and commitment to fighting antisemitism. ADL also thanks its individual, corporate and foundation advocates and contributors, whose votes of confidence in our work provide the resources for our research, analysis and programs fighting antisemitism and hate in the United States and around the globe.

ADL Poll: American Jews are Increasingly Concerned About Antisemitism in Wake of Recent Violence in Israel