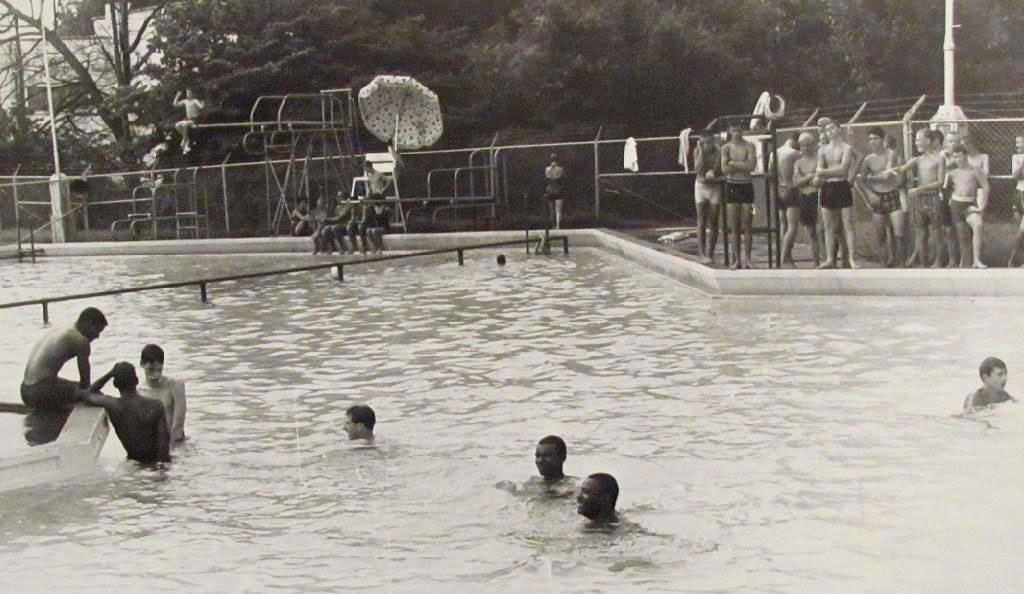 Public swimming pool in Raleigh, NC closed by the city after four black males went swimming with two white companions in 1962; this demonstration was part of the Civil Rights Movement efforts.

In Summer 2015, an incident caught on video captured a police officer outside a community pool who appears to be waving his gun at young partygoers who approached him as he tried to subdue and eventually hold down a teenage girl. She was wearing a bikini because she was at a pool party.

The party was held at the community pool in the Craig Ranch North subdivision, which is predominately white although McKinney, Texas is racially diverse. A group of African American teens heard about the party on social media. Not long after they arrived, allegedly a nearby white resident, began to harass the teenagers and one woman told them to “go back to Section 8 housing.” In a statement, the Police Department said officers arrived at the pool responding to a call about a “disturbance involving multiple juveniles at the location, who do not live in the area or have permission to be there, refusing to leave.” Several adults at the pool reportedly placed calls to the police.

After the incident, Eric Casebolt, the police officer, was placed on administrative leave and resigned a few days later. The video and story went viral. The significance and symbolism of it not only resonated because of the larger context of policing and race relations, but also because it revolved around a pool and Black and White people swimming together in that pool. It is a teachable moment.

Public swimming, race and segregation have a long and difficult history in this country, dating back to the early 20th century. Between 1920 and 1940, swimming as a pastime became increasingly popular and the number of public pools being built skyrocketed. By the 1960s, American use of public swimming pools declined dramatically. According to Jeff Wiltse, author of Contested Waters: A Social History of Swimming Pools in America, this decline was the direct result of desegregation.  Although some white people were comfortable with the desegregation of certain public domains, it seemed the majority of them—both from the North and South—shared the belief that swimming pools should be exempt from racial integration.

Swimming pools are unique in that they do not just require swimmers to share a space—rather, swimmers must share an intimate space. In addition to concerns of “contamination,” whites had a deep and widespread fear of interracial romance and dating. Despite laws against segregation, African Americans were often met with angry and sometimes violent crowds of white people when trying to use a public pool. Although these crowds had some initial success in deterring blacks from swimming, eventually integration laws were more strictly enforced and whites had to go elsewhere if they wanted to avoid swimming with African Americans. With this dramatic decrease in swimmers, many public pools closed and white Americans joined private pool clubs where the government did not yet enforce integration. However, even in 1973, when a court order mandated an end to racial exclusion at private clubs, white Americans continued to avoid swimming with blacks by building and solely using residential swimming pools.

Even though the U.S. has comprehensive civil rights legislation which deems segregation illegal, overt and implicit bias continues to make its way into our schools, voting places, residences and other public and private spaces. Laws are critical but they are not enough to fundamentally impact hearts and minds.

For educators, families and others who interact with children and youth, you can: