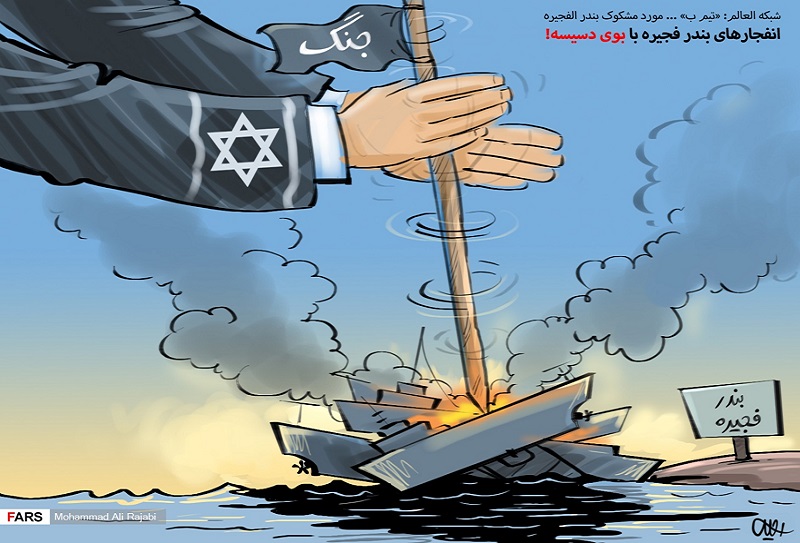 While military tensions seem to be ratcheting up between Iran and the United States, Iranian leaders and state-controlled media outlets continue to propagate anti-Semitism, using blatantly false anti-Jewish conspiracy theories in a cynical effort to shift the blame for the consequences of its own aggressive actions abroad.

Two days after four cargo ships were sabotaged in May off the coast of Fujairah, a principality in the United Arab Emirates, Iran’s semi-official Fars News Agency published a Persian-language cartoon falsely asserting that Israel was responsible for the attack and engaged in a conspiracy against Iran to spark a war.  Likewise, Iran’s government-controlled English-language Press TV promoted the claim by a guest of the show baselessly alleging that these attacks near Fujairah had probably been perpetrated as a “false flag” attack by Israel to blame it on Iran. 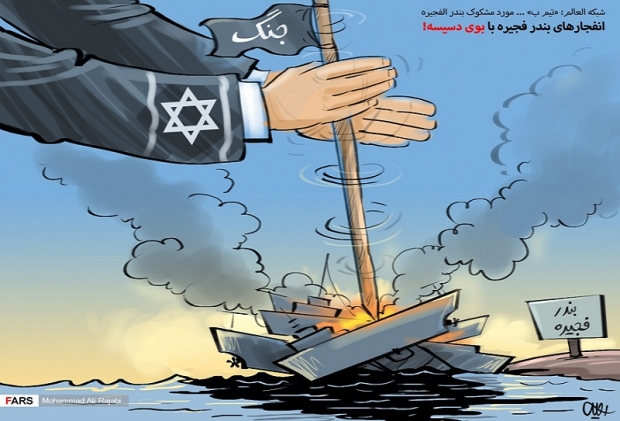 Likewise, after the U.S. blamed Iran for anonymous attacks in June on two additional tankers in the Gulf of Oman, Iran’s semi-official Tasnim news agency cited a former Iranian government spokesperson calling the attacks “a plot hatched by the Zionist regime of Israel and the US to exert more pressure on the Islamic Republic.”

In the context of such eagerness to ascribe negative trends in the Middle East to Jews or Israel, it is perhaps no surprise that both Fars News and Iran’s semi-official Mehr news agency covered a July meeting between Hezbollah leader Hassan Nasrallah and a visitor from Iran’s parliament by highlighting Nasrallah’s assertion that “the Zionists are the root cause of corruption and instability/insecurity in the region.”

Other Conspiracy Theories of Jewish Control:

Sometimes these anti-Semitic conspiracy theories also suggest devious and vast Jewish control over Western governments or the flow of information.

For example, in May Iranian President Hassan Rouhani asserted that the speeches U.S. officials make that criticize Iran “are written by Zionists word for word.”

In addition, a Persian-language cartoon published by Fars News in April solely blamed the Jewish people or Israel for tightening U.S. sanctions on Iranian energy exports.  The cartoon showed a hand wearing a Jewish star trying to use a cork that looks like President Trump’s face to plug up a pipe labeled “Iran’s oil”.  The caption below the cartoon was labeled “America’s Efforts to Cut off Iran’s Oil Exports.” 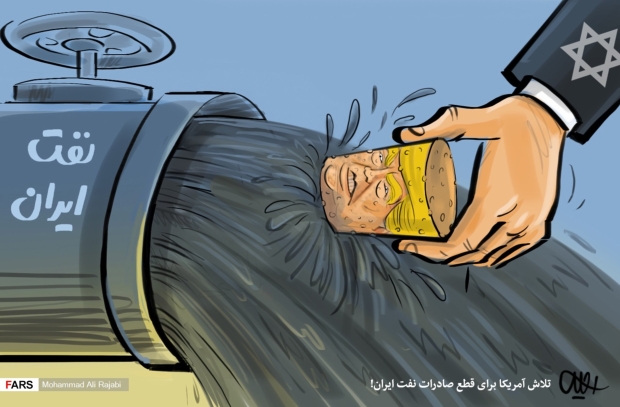 Similarly, after President Trump inaccurately claimed in June that Iran had stopped chanting “death to America” since 2017, Fars News blamed his inaccurate statement on Jewish money.  A Persian-language cartoon published by the news outlet showed Trump ripping up the Iran nuclear deal and stating that he hadn’t heard Iranians chanting the phrase “death to America” even though they are shown spray painting that very phrase onto his back and shouting into a megaphone.  According to the cartoon, the reason why he does not hear the Iranian outcry is because he is wearing headphones with a dollar sign on one side and a Jewish star on the other. 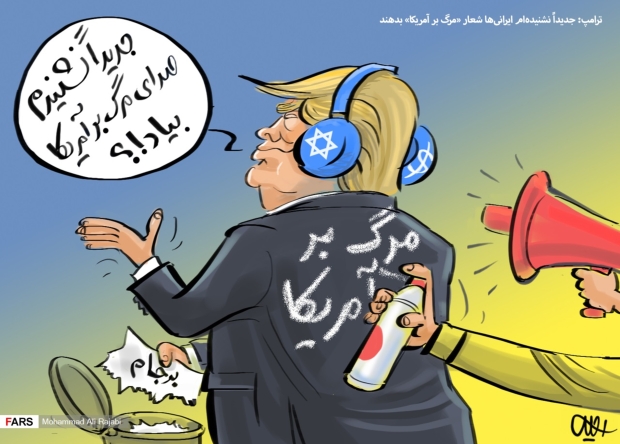 After British authorities seized an Iranian oil tanker suspected of violating international sanctions on Syria on July 4th, the focus of Iran’s aggression and anti-Semitic conspiracy theories shifted somewhat from the United States to Great Britain.  On July 19th, Iran seized at least one British oil tanker in the Persian Gulf in retaliation.

At the end of July, Fars News published a series of anti-British political cartoons about the crisis, many of which depicted the United Kingdom as a fox, a common anti-British convention in the Iranian press.  One of these cartoons placed the blame for this crisis on international Jewry, showing a fox with Jewish stars on its eyes, one of which is winking and looks like a boat. 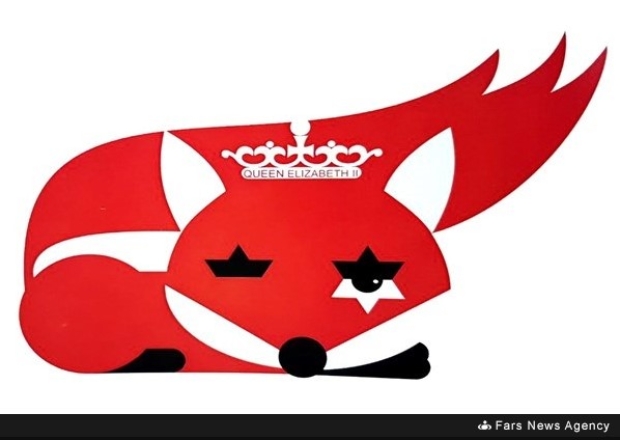 Similarly, Iran’s Press TV reported in mid-July on Boris Johnson’s efforts to replace Theresa May as UK prime minister with the headline “The Zionists Tighten Their Stranglehold on British Politics.”  The focus of this article was on decrying what it called “the depth of Zionist penetration across the British political establishment.”

Language demonizing Jewish people continues to be quite common in messaging by Tehran.  On May 30th, a political cartoon published by Fars News showed Israeli, Saudi, and American leaders making a deal with the devil by agreeing to a “deal of the century” peace plan that crushes the Palestinian people and elicits outrage from the world. 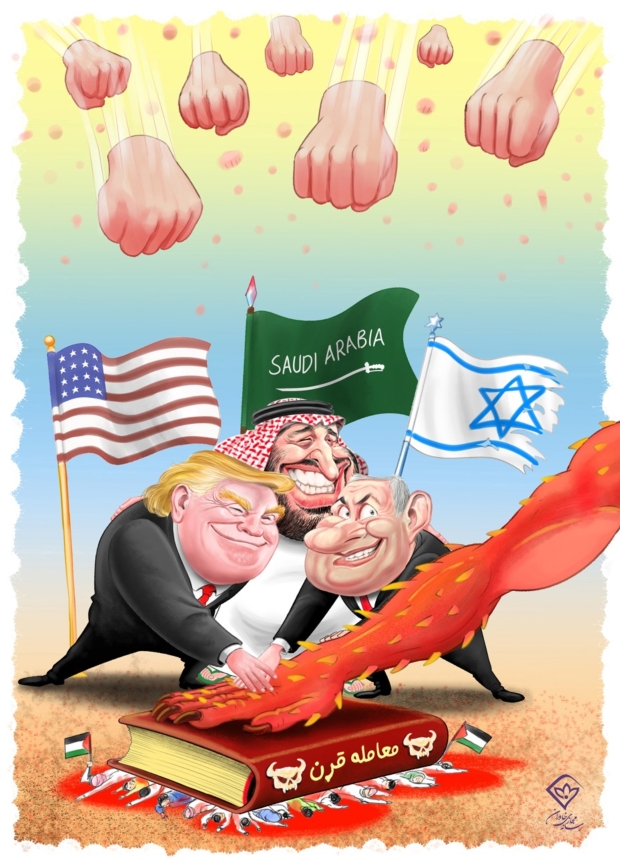 The next day, Iran’s government-run Hamoon TV aired a music video showing the Statue of Liberty with a Jewish menorah in place of its torch, which the singer describes as “a flame straight from hell.”  That same day, Supreme Leader Khamenei’s official representative to the Iranian city of Birjand called Iran’s enemies “a fusion of Jews an polytheists” who are “impure and evil.”

This and other speeches often engage in dehumanizing Jewish people as well.  Khamenei’s representative in Birjand also called Iran’s Jewish and polytheistic enemies “a crossbreed of dogs and wolves that has pounced on the convoy of humanity.”  He even went so far as to call them “predatory, reptilian, and satanic”.

That same day, the Secretary of Iran’s Supreme National Security Council called Israel “the home of the spider”.  In late April, Iran’s English-language Press TV promoted a guest’s assertion that the risk of America waging war on Iran was “not so much [from] Trump per se but rather these hardline ultra-Zionist fanatics who have wormed their way into a position of influence in this administration.”

From Hatred to Violence:

For example, Iran’s government-administered Ofogh TV aired a documentary on June 1st showing a village in Iran staging a mock bombing of Israel, the U.S. Capitol, and a U.S. Navy ship.  The event was patronized by a general from Iran’s Islamic Revolutionary Guard Corps who relayed greetings to the group from Supreme Leader Khamenei.

In fact, descriptions of Jews, Israel, or Zionists as “the enemy” are extremely common in the Iranian government’s official messaging, and often include absurd and outrageous claims.

For instance, Khamenei’s representative in the province of North Khorosan preached in May that “The very last statement in the will of Emir of the Believers [Ali ibn Abi Talib], which was made as he was on his deathbed, was: ‘Oh Muslims, the worst, most stubborn and most grudge-filled of your enemies is the Jews – particularly the Zionist Jews’.”  Ali ibn Ali Talib was one of the Prophet Muhammed’s successors who died in the 7th Century, over a millennium before the founding of Zionism.

As tensions continue to ratchet up, this incitement of hatred and propensity to stir violence continue as well.

On July 5th, Iran’s official Channel 1 TV broadcast a Tehran sermon by a member of Iran’s Expediency Council and Assembly of Experts in which he celebrated the government’s plans to increase its enrichment of uranium and warned that “Israel will be razed dozens of times” if Tehran so desires.  The crowd dutifully responded by chanting some of the regime’s most iconic – and belligerent – slogans, including “Death to America!  Death to England!  Death to the hypocrites and the infidels!  Death to Israel!”