Telegram, the online social networking app, may not be a household name in the U.S. like Twitter or Facebook, but with well over 200 million users, it has a significant audience. And it is gaining popularity.

The platform, which is a cloud-based chat and group messaging app, was created in 2013 by the same two Russian brothers who founded the Russian-based social networking site VKontakte, or VK which is also known for its lack of moderation of white supremacist content. At present, the various platforms’ leadership teams appear to be uninterested in addressing this issue

Telegram currently hosts more than 221,000 channels and groups. Many channels are publicly accessible, but some channels and groups (within the channels) are private and require a “digital key” (link) to gain admission. Channel topics range from knitting to videos of mass murders (which are readily available to the public). And while most of Telegram’s 200 million-plus users have nothing to do with extremism, extremists of all types, from Islamist extremists to right wing extremists, have found Telegram to be a hospitable and safe space to congregate online. In our research over the last five years, we have seen thousands of Islamist extremist channels and more recently, hundreds of white supremacist channels. We believe this is just the tip of the iceberg.

ADL first reported on Telegram’s extremism problem in 2015, when we detailed a number of ISIS-related channels and groups on the platform. The company responded by updating its terms of service to make it easier to remove “illegal public content,” and removed a number of ISIS channels. A recent survey of the platform indicates the effort did not have a lasting impact. Following the November 2015 Paris attacks and subsequent discovery that the attackers had used the application to communicate, Telegram CEO Pavel Durov tweeted, “Privacy is paramount. Public channels, however, have nothing to do with privacy. ISIS public channels will be blocked.” Durov’s statement implied the application would permit the continuation of ISIS private channels, meaning smaller-group communications between individual ISIS users would be allowed to continue.

Some Telegram channel administrators appear to recognize the inflammatory and racist nature of the content they are hosting and seem to have accepted the possibility that law enforcement is monitoring these channels. These administrators attempt to undermine gravity or intent with “disclaimers” of sorts. For example, the description for the “Holocaust II” channel reads, “A sequel based on the original folk tale. These are jokes and memes, you kike puppet fed retards.” The “GAS | ME | DADDY” channel description offers this greeting: “HELLO SPLC, IM BACK!! (NOTE FOR FEDS: All rhetoric expressed on this channel is purely harmless rhetoric, and should not be interpreted as amounting to any kind of threat.)” And on the “RapeWaffen Division” channel, where posters advocate for violent rape, the description reads “Rape War Soon! Prepare! Note for feds: Complete satire. HAIL METH 1690   HAIL RAPE 1589HAIL CRACK 1230    HAIL AIDS 1776.”

Many of the white supremacist channels on Telegram have thousands of subscribers. And while Telegram’s terms of service policy clearly stipulates that users agree not to “promote violence on publically [sic] viewable Telegram channels, bots, etc.” it is extremely easy to find content that violates this agreement, including the videos captured by white supremacist mass shooters Brenton Tarrant (Christchurch, New Zealand) and Stephan Balliet (Halle, Germany) during their murderous rampages earlier this year. The videos continued to be accessible on Telegram even after other platforms (including Twitch) had removed them.

On the Telegram channel for the white supremacist group Vorherrschaft Division, this image promotes the murder of Blacks, gay people, Jews and others: 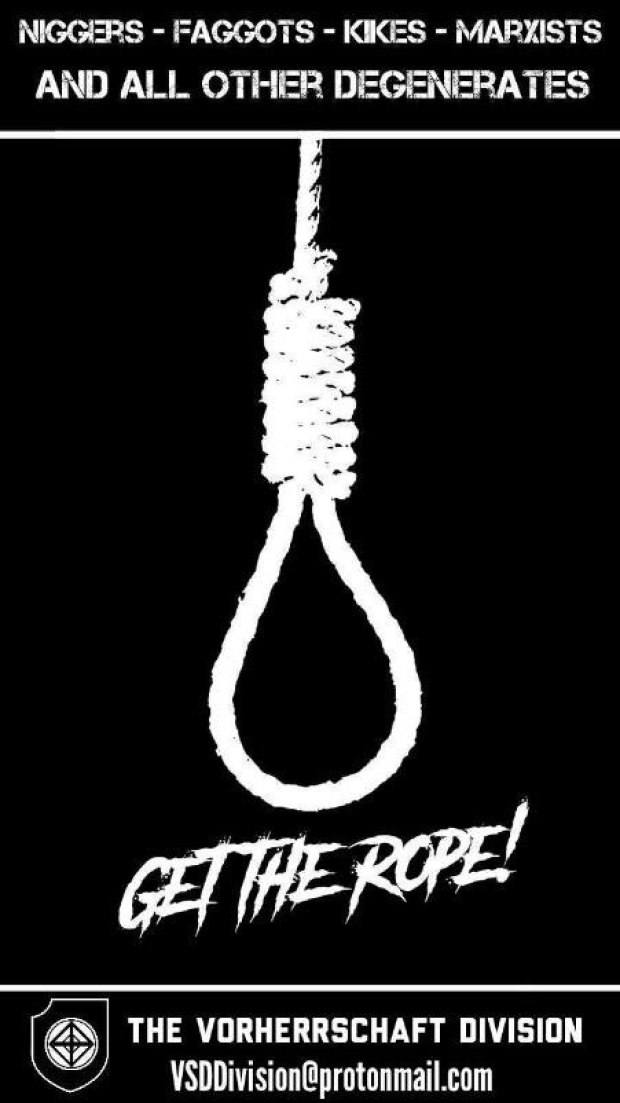 The RapeWaffen Division channel is a white supremacist channel that openly promotes rape and murder as part of the quest for race war. 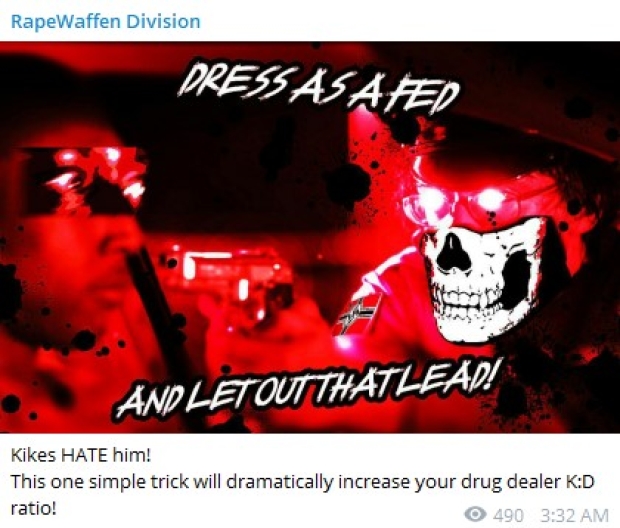 The description for the “Gen Z Y K L O N 1488” channel (Zyklon being the poison used by the Nazis to murder victims in the death camps and 1488 as a white supremacist numeric code) is the common white supremacist phrase, “GAS THE KIKES, RACE WAR NOW!” 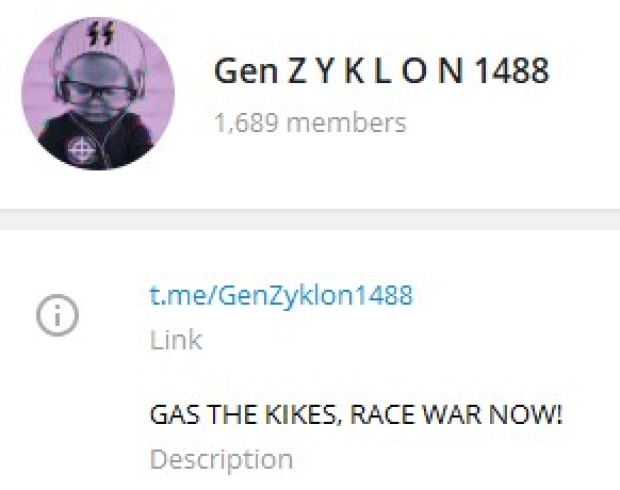 As we have seen on other social media platforms, this white supremacist content will continue to reach more people as long as Telegram refuses to actively enforce its own terms of service.